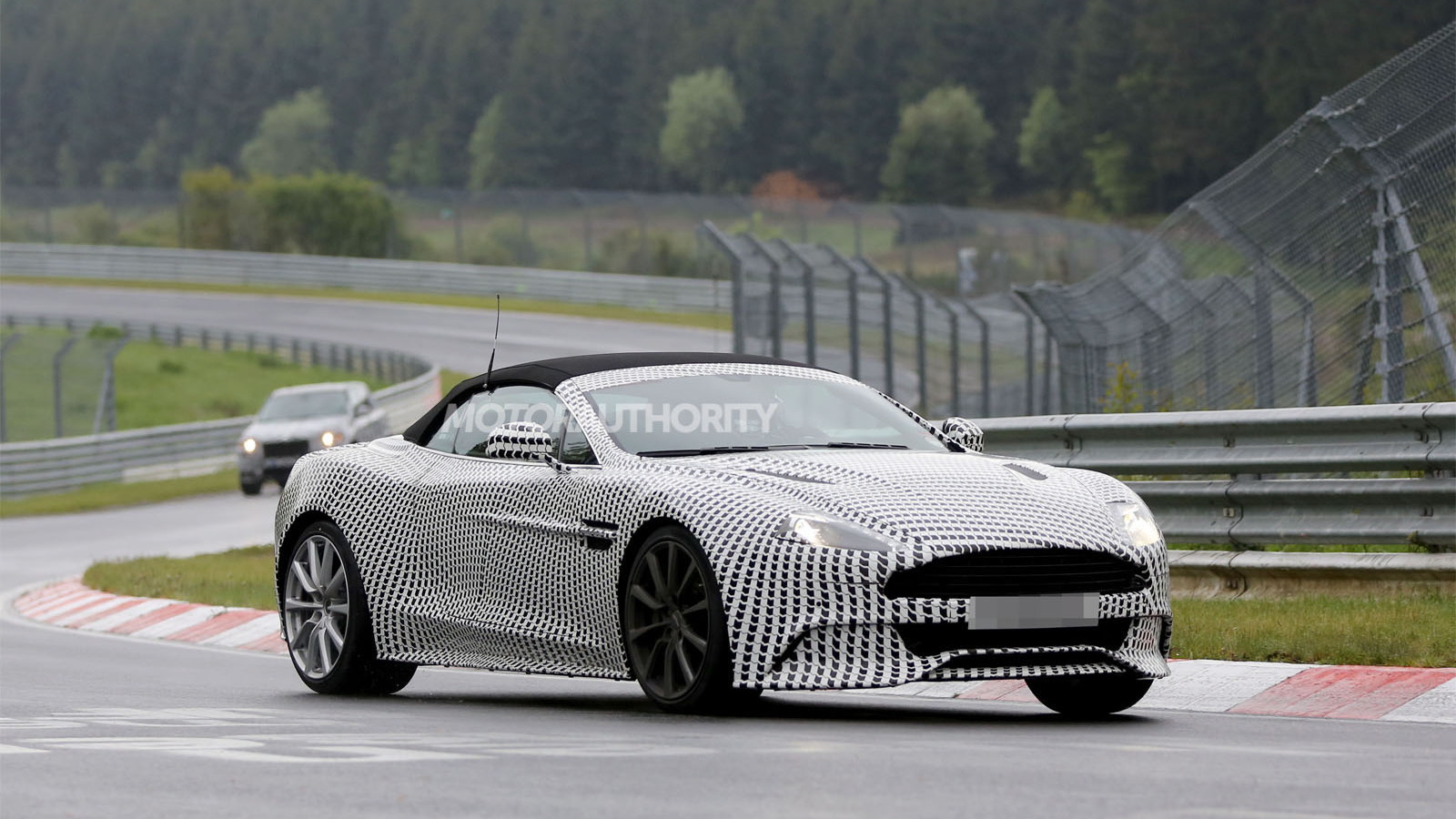 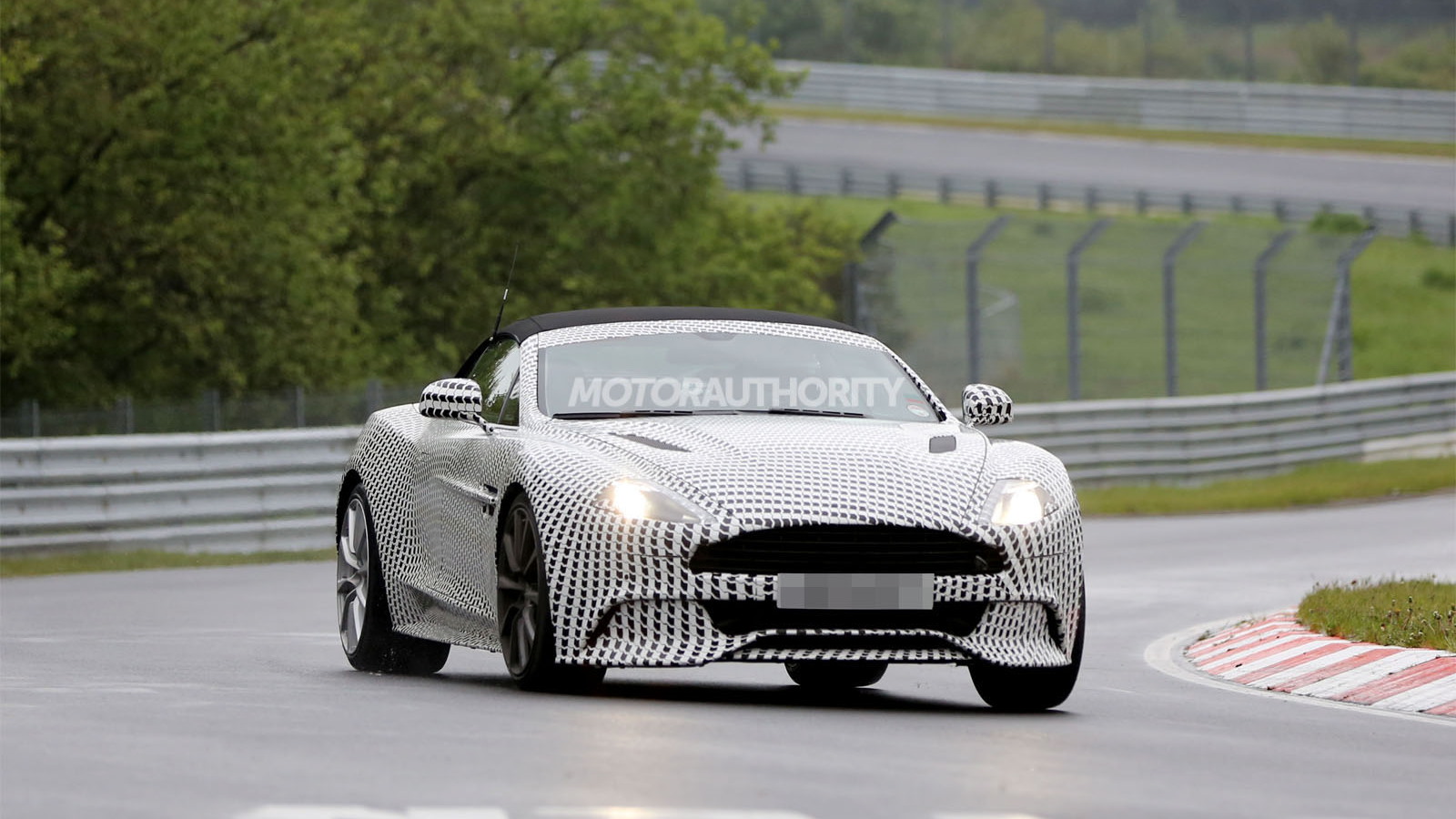 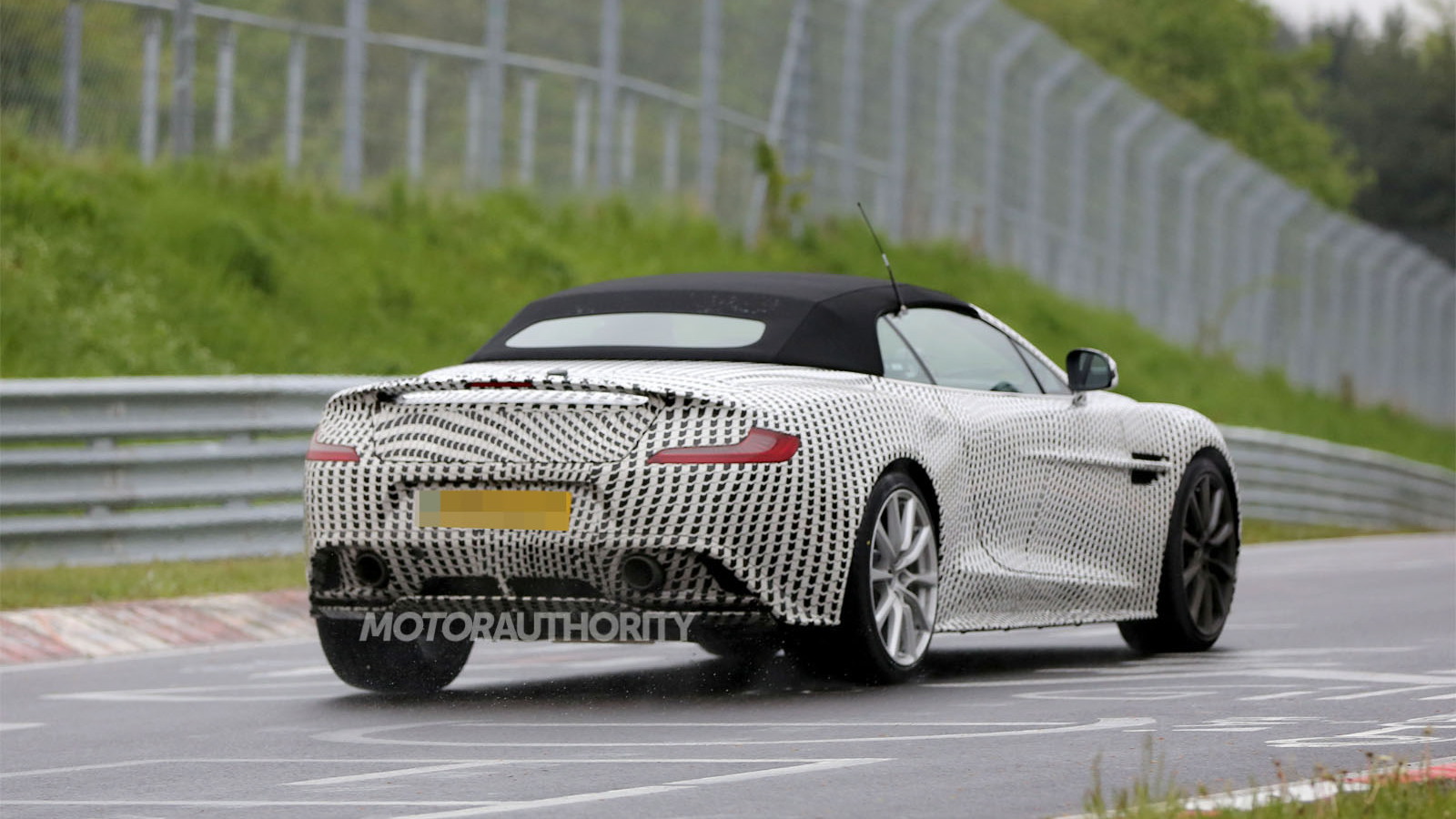 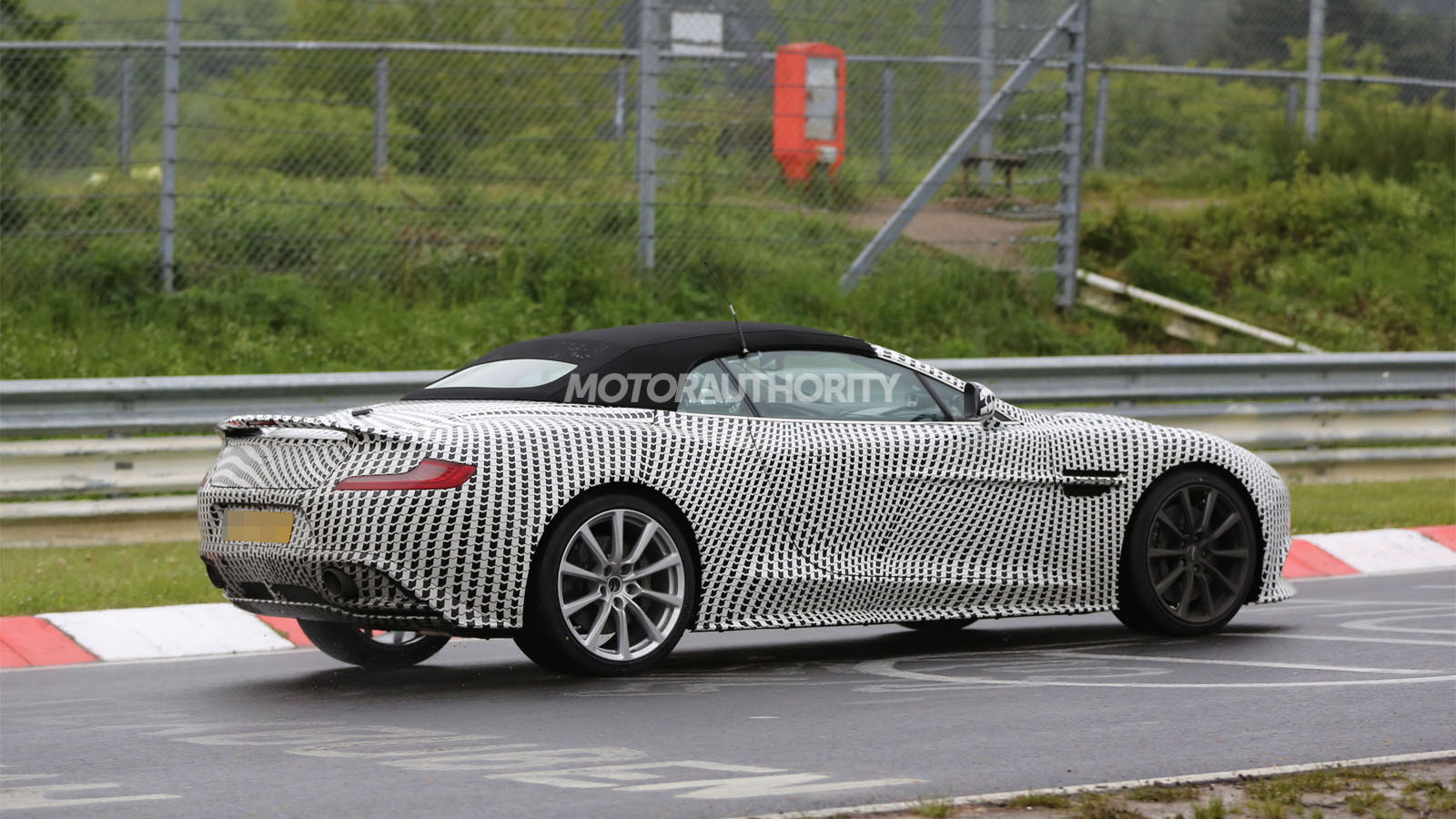 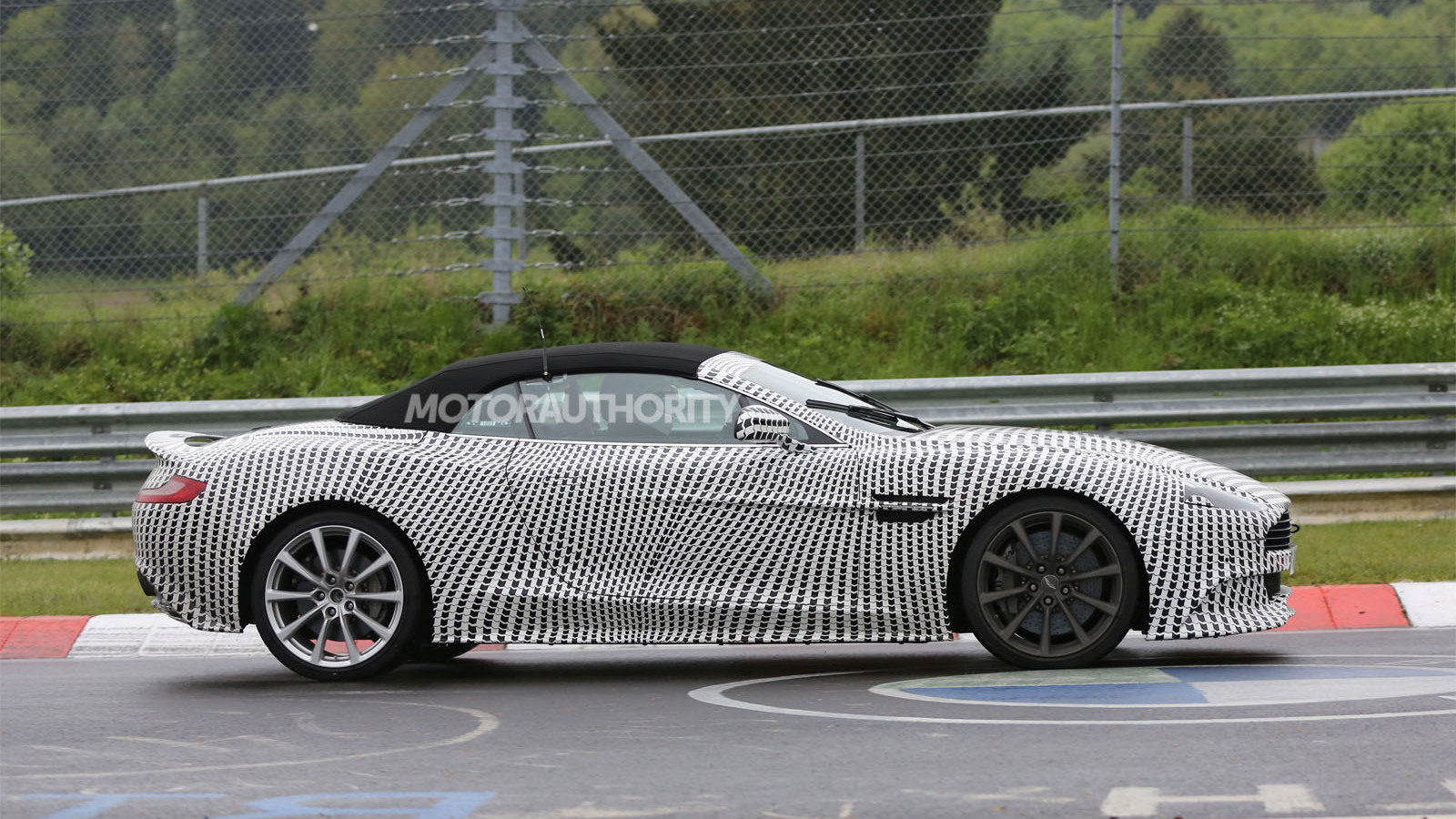 49
photos
The convertible version of the new 2014 Aston Martin Vanquish, a Volante in Aston Martin speak, has been spotted tested once again, this time wearing more revealing camouflage on the Nordschleife.

The Vanquish Volante was previously spotted testing just outside the Nürburgring test track in Germany.

The car is expected to go on sale later this year, which suggests a debut in the coming months.

As our spy shots reveal, the Vanquish Volante will eschew a folding hardtop in favor of a conventional fabric roof.

This should keep weight increases to a minimum, which is important since we’re likely to see some increases due to additional reinforcements required to make up for the missing roof.

The images show a unique rear deck lid, which is longer than the one on the coupe, as well as Aston Martin’s new rear spoiler design for the Vanquish.

Otherwise, the Vanquish coupe and new Vanquish Volante will be identical. Under the mostly carbon fiber body is Aston Martin’s latest platform design, based around its VH principle of designing cars with continuous updates.

Power comes from a 6.0-liter V-12, rated at 565 horsepower and 457 pound-feet of torque. This sends drive strictly to the rear wheels, via a six-speed Touchtronic 2 automatic transmission.

The wheels measure in at 20 inches in diameter and are shod with Pirelli P Zero tires measuring 255/35 up front and 305/30 in the rear. The brakes are carbon ceramic units.

Due to its extra weight, expect performance of the Vanquish Volante to be just a tad off the pace of the coupe, which goes from 0-60 mph in 4.1 seconds and reaches a top speed of 183 mph.

Inside, only the finest woods, leather and metal trim will be utilized, and customers will have the choice of either two or 2+2 seating configurations.

Finally, look for pricing to creep up only slightly on the $290k starting price of the DBS Volante, which the new Vanquish Volante replaces.

While you await the arrival of the 2014 Aston Martin Vanquish Volante, hit this link to read our first drive of the coupe.