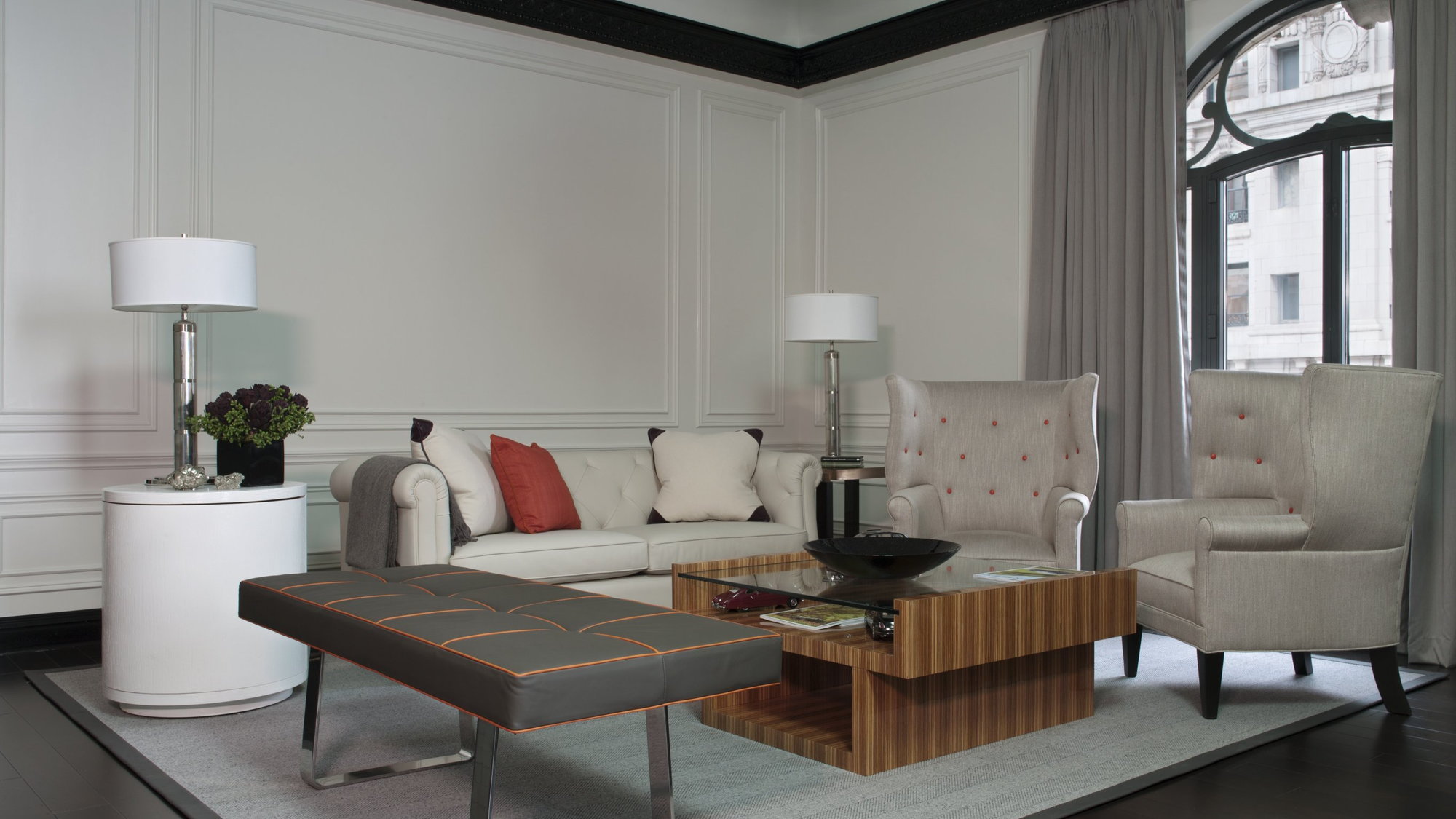 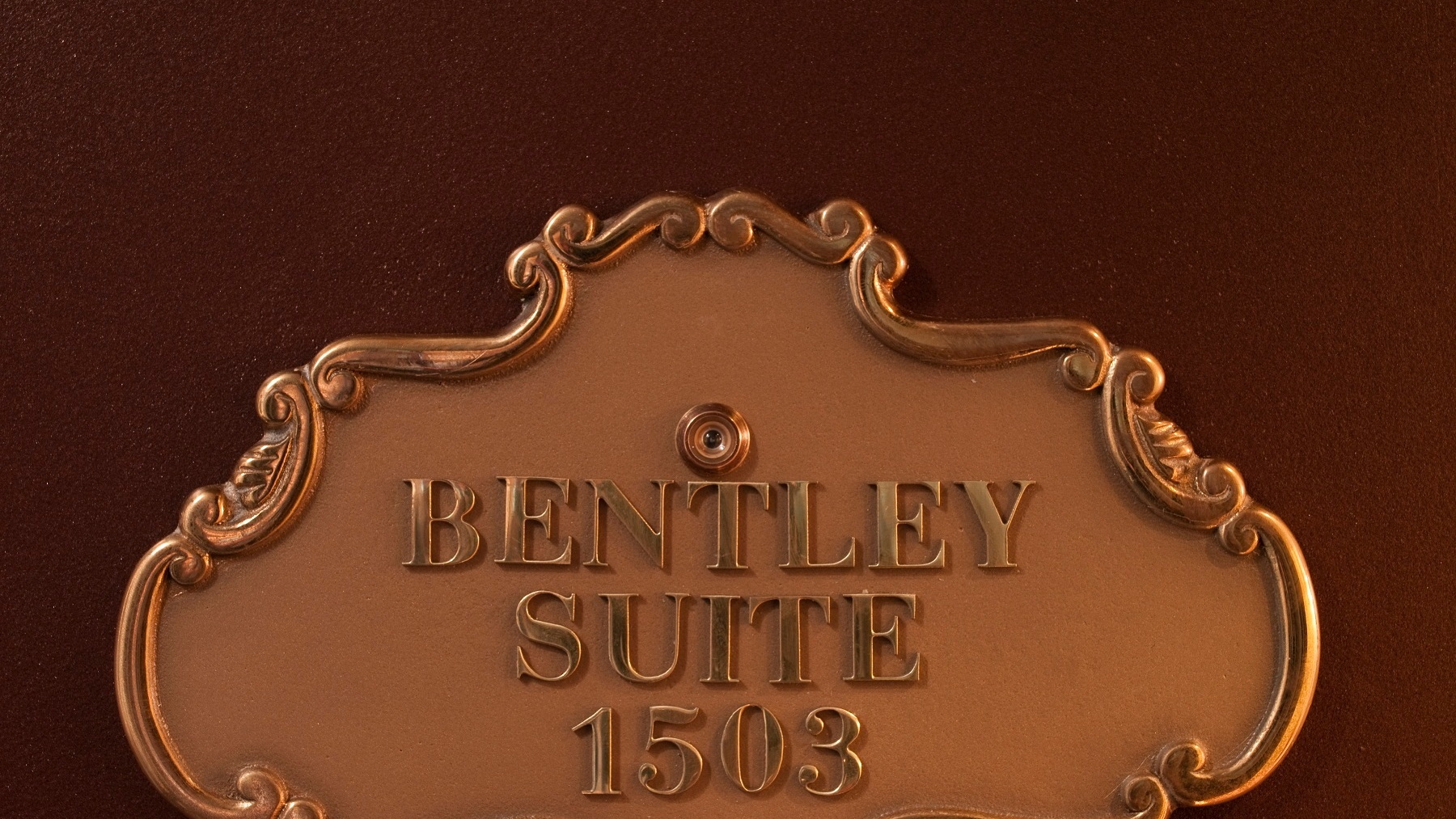 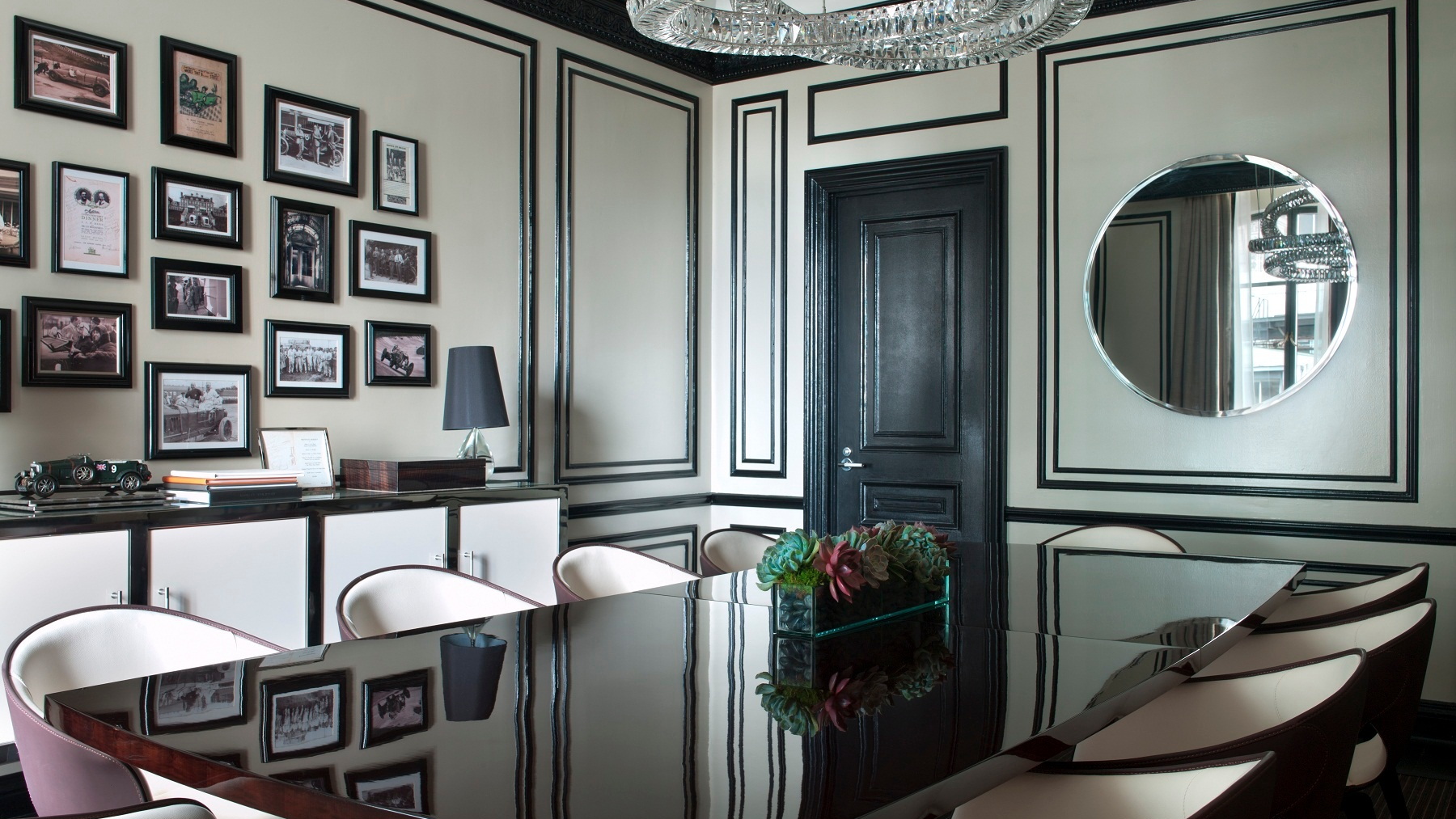 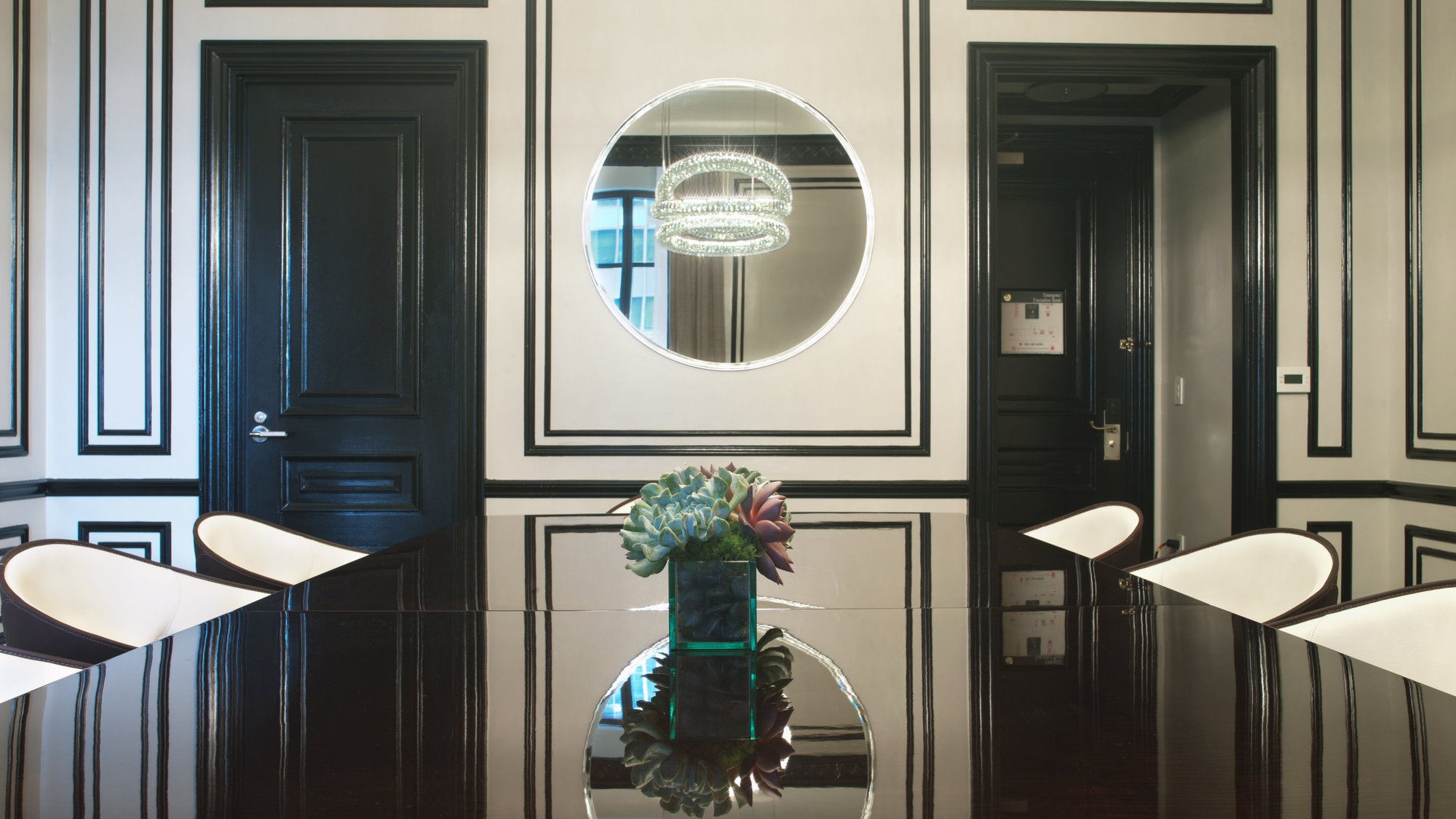 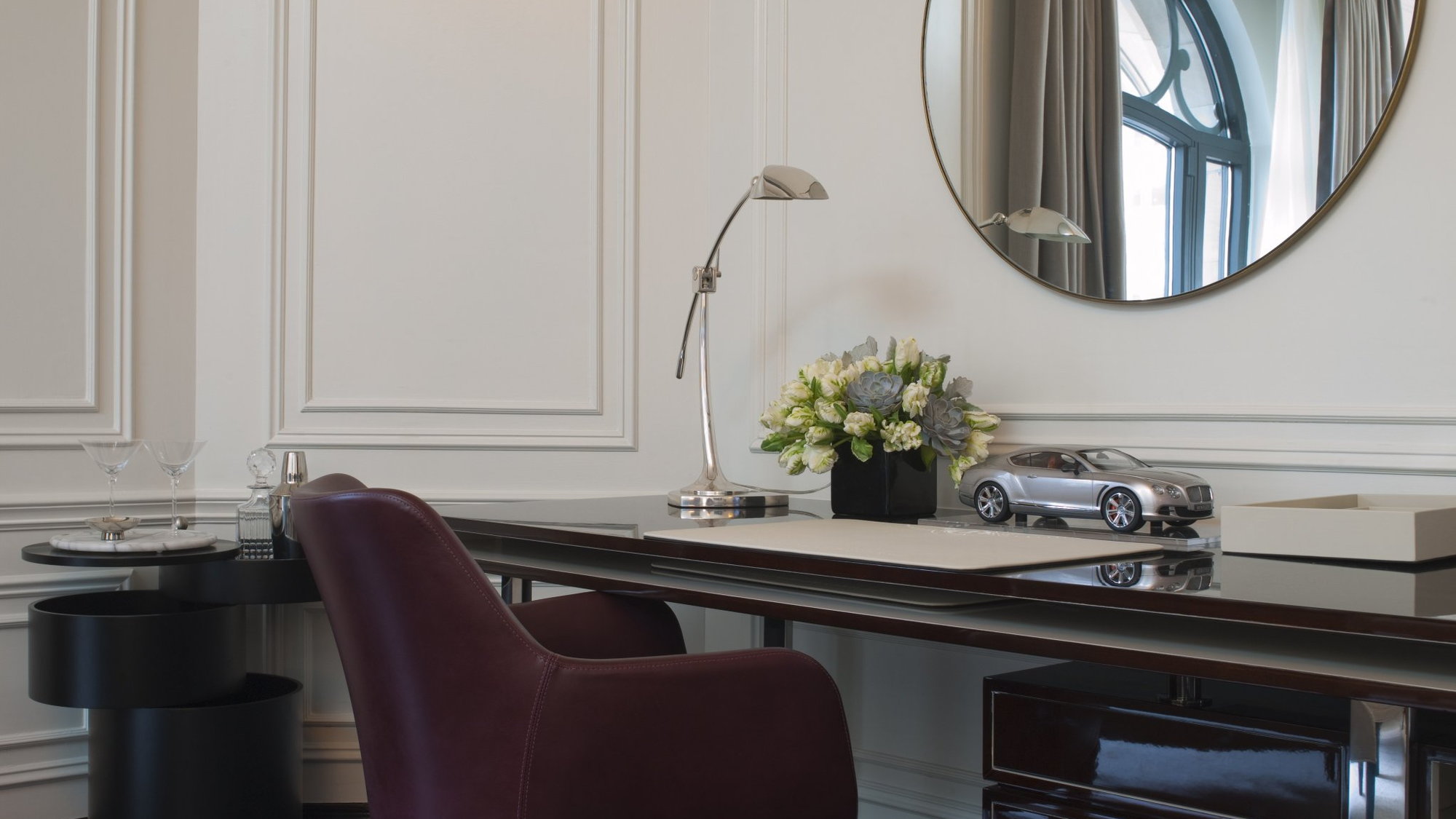 It's not every day you see a historic Bentley Speed Six parked in midtown Manhattan.

But there it was, in front of the luxe St. Regis Hotel in some of the priciest real estate in the world.

The classic Speed Six outside led to a new launch inside: the Bentley Suite at the St. Regis, the luxury marque's first "branded experience" in a hotel room.

Renting for a substantial $9,500 per night, the 15th-floor corner suite is meant to introduce St. Regis guests to the craftsmanship, materials, luxury, and style that Bentley embodies.

And while neither the hotel nor Daniele Ceccomori, the suite's designer, will say for sure, it may conceivably be the first of several such Bentley Suites in St. Regis hotels worldwide.

The suite also comes with access to the 2013 St. Regis Bentley Mulsanne commissioned by the hotel with a bottle cooler and crystal champagne flutes, St. Regis crests on the headrests and personalised tread plates--though only within a 10-block radius, apparently.

Entering the 1,700-square-foot suite, the first thing you notice is the lovely smell of leather--which in the foyer is laid in a herringbone pattern on the floor.

Ceccomori noted that it was a tougher grade of hide than Bentley uses for its interior leather, for durability, but that it would acquire scuffs and marks over time, "like a classic car."

On the foyer table, an overscale chrome model of the Flying-B hood ornament is mounted on an oblong plinth, resembling on first glance an ornate old-style flat iron.

Behind it is a round mirror and a diamond-quilted leather wall in a pale beige color with its stitching in Living Green, one of a few new interior accent colors Bentley Motors plans to introduce in future vehicles.

The bedroom has side cabinets inspired by the fold-out cupboards in the back of Bentley's XP9 F sport-utility concept, with two walls that retain the old-world St. Regis plaster details and two in contracting shades that blend Bentley materials, colors, and textures.

In general, the suite is quiet and masculine in tone, with dark browns, greys, cream, and ivory colors, large-scale but not ponderous furniture, and many playful touches that are meant to indicate an evolution of the Bentley esthetic.

Curtains are edged in seat-belt webbing, for instance, and glossy white barrel side tables open to reveal orange interiors for an unexpected splash of color.

Trim and furniture materials include a variety of fine woods, leathers, woven fabrics, and stainless steel.

The living room has a seating area, a sideboard, and a desk with floating drawers, though we noted--sadly--a typo on the quotation woven into the leather writing pad.

The flexible dining-room space can double as a conference room, with a large flat-screen display hidden behind buff-colored square-paneled doors.

Analog Breitling clocks over the screen show the times in New York, London, Moscow, and Riyadh.

And overhead, a chandelier of three rings angled in layers contains hundreds of white LEDs illuminating rectangular crystals, alluding to the LEDs in a Bentley's running lights.

Thus far, Ceccomori said, the one and half bathrooms of the Bentley Suite are still standard-issue St. Regis. Marque touches to those rooms will come in a later phase, he noted.

The suite's artworks mix images and artifacts from the classic Bentley racing period--the late 1920s and early 1930s--among furniture that has some muted Art Deco allusions.

Bentley magazines and art books are neatly stacked on sideboards and tables, should the occupant wish to read more about the marque, its racing history, and the design of its current and future vehicles.

Ceccomori referred several times to the interior design esthetic of the XP9 F, the crossover concept whose exterior styling received what can charitably be described as mixed reviews from both critics and Bentley buyers.

"We believe the two brands are perfectly matched, both bringing a clear understanding of what is important  for a genuine luxury experience - attention to detail, quality, a sense of heritage balanced with contemporary style and an instinctive knowledge of what is right for our customers," said Bentley board member Kevin Rose.

The Bentley Suite, he said, will "will become a benchmark for taste and quality and a destination in its own right in one of the world’s most wonderful cities.”

The St. Regis has two other luxury-branded suites--from Tiffany and Dior--but the Bentley Suite is the first created together with a carmaker.

Earlier this year, Bentley and the St. Regis announced a global partnership that offers guests and customers such exclusive experiences as driving programs and special events.

The hotel was built in 1904 by magnate John Jacob Astor, and has remained a landmark of New York City luxury for more than a century.