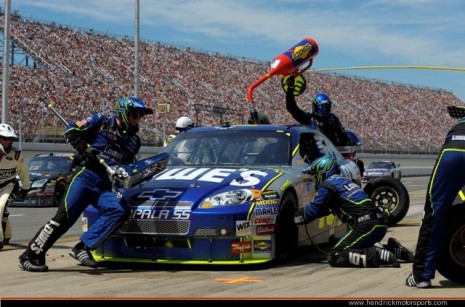 Jimmie Johnson's #48 during pitstop in 2008. Image via Hendrick Motorsports.

The White House has a long tradition of honoring champions from the world of sport, including racing. Following that spirit, President Barack Obama has invited 2010 NASCAR Sprint Cup champion Jimmie Johnson and the 11 other 2010 Chase For The Cup drivers to the White House next Wednesday. Five of them won't show up, citing "scheduling conflicts."

It's unclear if political views are behind the decision not to attend for any of those five who can't make it, but regardless of the reason, it seems odd that so many would pass up what might be a once in a lifetime opportunity. Yes, drivers have busy schedules that are packed with appearances in between test-sessions and race weekends, but by declining the invite, these drivers open themselves up to speculation that they've skipped out due to political reasons--especially since NASCAR is still stereotyped as a Southern sport with conservative roots.

We don't know whether these drivers are telling the truth. We do know that political differences have caused athletes to skip White House ceremonies before--and that may just add fuel to the fire.