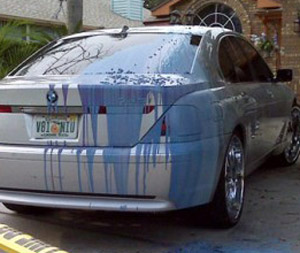 After a spate of damage caused to more than 20 cars was reported this past weekend in the normally quiet Pinellas County, Florida, local police were able to apprehend the alleged perpetrator yesterday after following a trail of paint directly to his house.

One of the cars was this BMW 7-Series, which was doused in paint. Others had their tires slashed and one was even set on fire.

The alleged perpetrator was 21-year old Ramsey Charles Sheard, who police arrested after they found a trail of paint leading from a vandalized car in the driveway of one of Sheard’s neighbors directly to his house. There they found empty paint cans and paint residue on some of Sheard’s clothing.

According to the Pinellas County Sheriff's Office, Sheard later admitted to causing the damage, stating that he had been drinking and taking Xanax, a treatment for anxiety disorders, just prior to heading out on his vandalism streak.

We can confirm that he was not dressed as a ninja, although that would be slightly amusing given the recent ninja-related car vandalism.