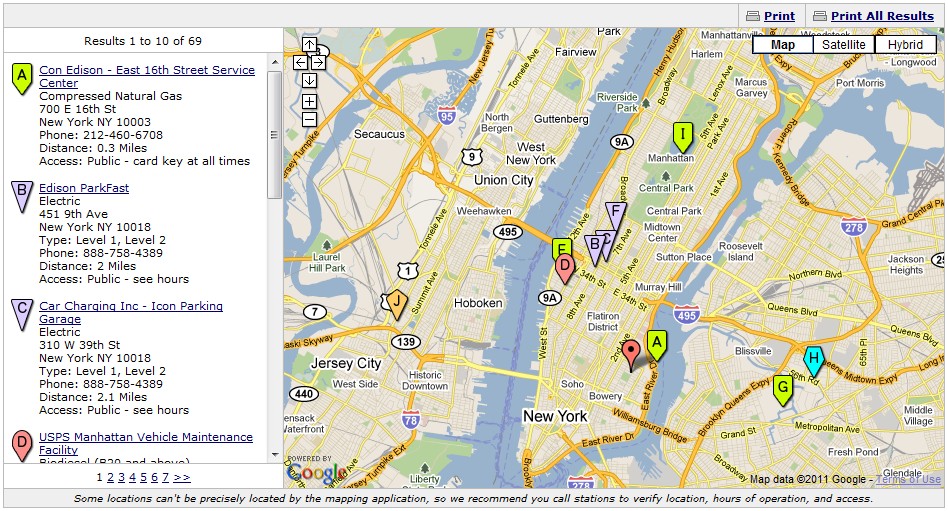 Despite the best efforts of some in the auto industry to keep electric cars off the roads, they're back. Given the current state of technology, the EV's revenge will likely be slow and steady, but most experts agree that electrics are the future of transportation.

There are, however, several obstacles standing between mainstream consumers and widespread EV adoption -- notably, driving range and anxiety about charge point location. Last week, we gave you some pointers on the former, and now, thanks to Google and the Department of Energy, we can help with the latter, too.

Back in March, Google said that it was working with the Department of Energy to create a comprehensive map of EV charging stations across the U.S. Late last week, at the height of the media frenzy surrounding the New York and Shanghai auto shows, Google announced that the map is now live. You can see it for yourself at the Alternative Fuels and Advanced Vehicles Data Center, a subdomain of the DOE website.

There's a lot to love about this project. For starters, the map includes data on a wide range of fuel types, including electricity, hydrogen, biodiesel, compressed natural gas, and more. Furthermore, the map includes info from a range of service providers, like Pacific Gas & Electric. In fact, it appears that any alternative fuel station can add its location to the list.

We also love the site's travel feature, which lets users map out a route and find alt fuel locations along the way. We like the fact that users can edit the map, adding stations that have recently opened or deleting those that no longer offer alt fuel services. And of course, we appreciate that the data is downloadable in a variety of formats to merge with many GPS systems.

We're not so fond of the fact that the map is buried deep within the DOE website, and we wish there were a mobile version of the site for folks who want to access the data on their smartphones. (They can still do so using the regular webpage, but it's not optimized for smaller phone screens, which makes navigation kind of a pain.) That said, it's a great  first step.

For more, check our overview of the Google/DOE project at All Cars Electric.

[Mashable via All Cars Electric]