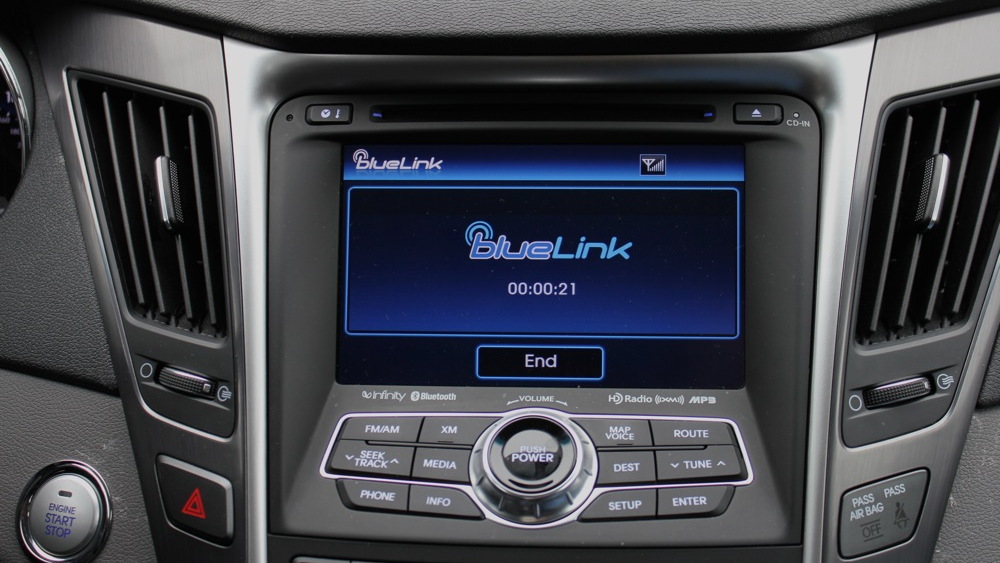 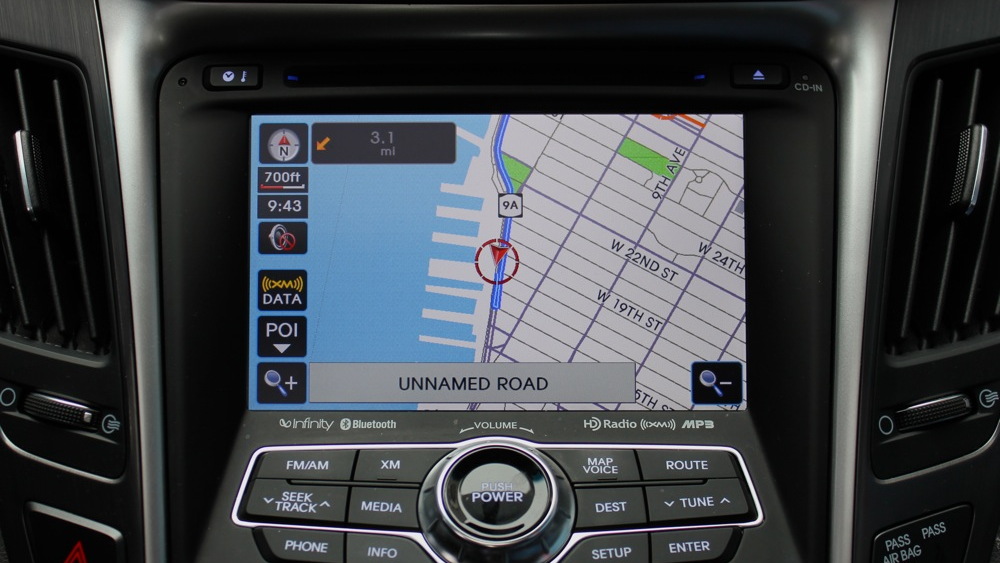 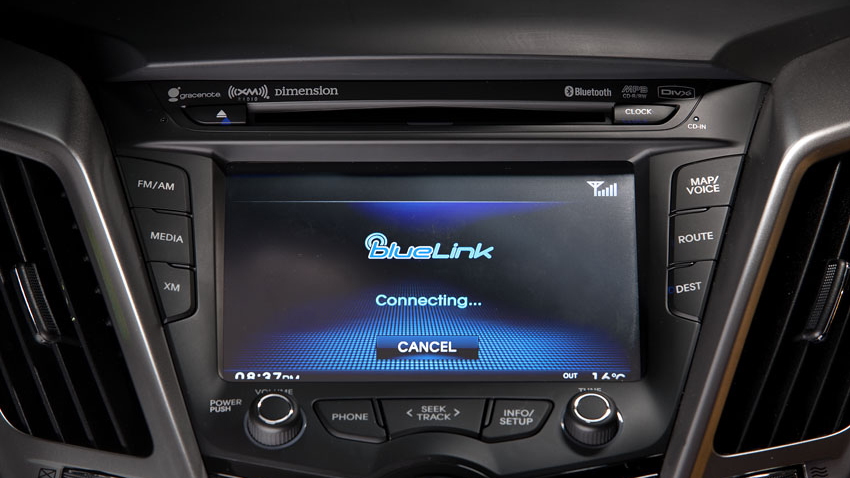 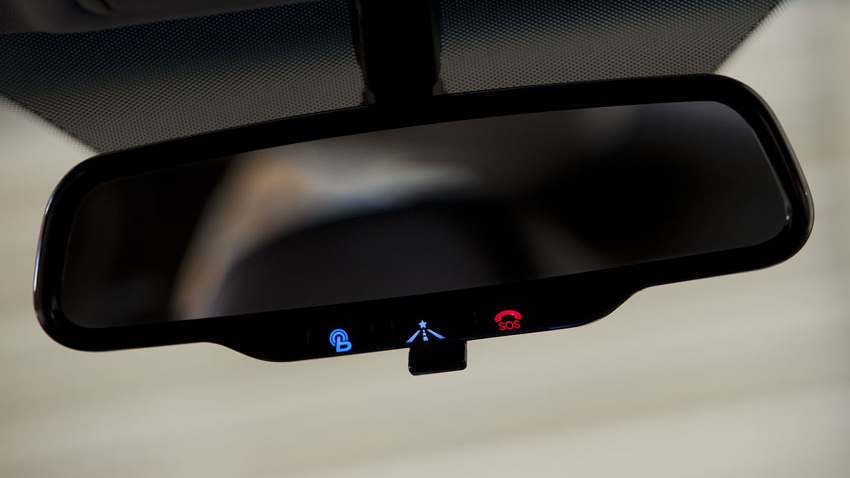 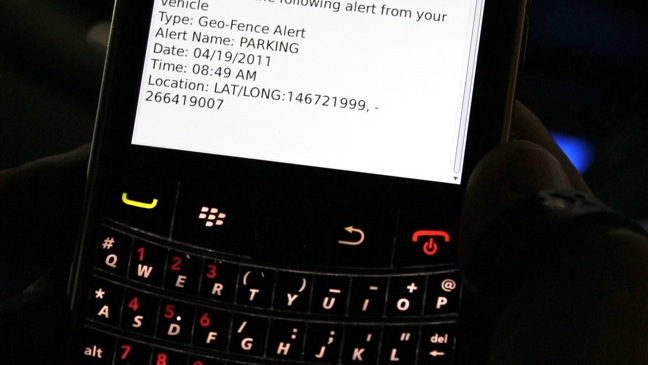 Hyundai takes its first steps into the buzzy field of in-car telematics with Blue Link, which bows later this year in the 2012 Sonata sedan and the new 2012 Veloster sport coupe.

Blue Link uses the Web, human operators, and data hardware inside the car to fuse mapping and mobile services and enable them via voice commands. It's all controlled either by buttons on the rearview mirror, or by controls on the vehicle's steering wheel, or an LCD touchscreen for cars with navigation.

During last week's New York Auto Show, we went for a ride up the West Side Highway in a Sonata sedan equipped with a prototype Blue Link system, with a co-driving laptop on hand to show off the system's Web portal and its user-customizable features.

In practice, the Hyundai system feels more like GM's OnStar service than it does the newest systems like Ford's popular SYNC or Toyota's upcoming Entouch, both of which interact with the driver's cell phone for data signals and services. With Blue Link, you'll want to connect your handset for audio streaming and phone calls--but it's not necessary to access some of the other services, like on-the-fly restaurant reservations or nearby weather reports.

In fact, Blue Link is more like a stepping stone into cloud-based information services, in that it uses people to substitute in when voice commands just aren't precise enough. For example, on the Sonata, an onboard hard drive stores maps for the navigation system when it's specified; Blue Link adds on the ability to search for destinations that have been added, updated, or newly identified by Microsoft's Bing search engine since the last car-based GPS update was performed.

Those new bits of information can be pulled down from the Web via voice and a rearview mirror-mounted button. Press the button, speak a natural command ("I'd like to go to Starbucks") and Blue Link translates it into a Web search. If the Bing-driven algorithm can't find a result, it's kicked over to a human concierge, in a call center in Dallas or in Boston; those operators find the correct result on the Web through a Blue Link management tool, and send it back to the car for translation into audible menus that prompt the driver to accept the information, or to hear another choice.

The system will allow drivers to cycle through five total choices, for everything from destinations to gas prices to restaurants recommended by the community of Bing users on the search engine's Web pages. However, the new selections are stored in the car--but they don't update the car's database.

Like SYNC and Entouch, Blue Link offers some voice-to-text services, but Hyundai's chosen to limit the texting portions of Blue Link to outbound messages. It's all in the name of driver safety, they say--while the systems from Ford and Toyota allow users to hear text messages coming in through their phones and respond with one from a set of stock responses, Blue Link will only translate outbound voice memos to text and sends to the recipient via SMS. No two-way conversations are allowed, unless they're done by the virtual equivalent of voice-to-text-to-text-to-voice translation, i.e., a phone call.

Blue Link also offers emergency notification services in case an airbag deploys, and allows you to call from the car for roadside assistance, something you can do whether your phone has battery charge or not, Hyundai points out.

Blue Link will come in three flavors: Assurance, which includes the basic safety services; Essentials, which enables remote access to unlocking, horn, and start functions, as well as vehicle diagnostics and the text-messaging ability and user-programmable alerts for when the car goes outside a specified area, speed limit, or curfew time. It also allows you to share your location, which sounds vaguely disturbing until you realize it's limited to people you identify at the Blue Link web site -- whether they're family or colleagues, and not the entire Facebook world (unless you want that, too). All of those customizable features are accessible to owners via the Hyundai Blue Link Web pages.

There's little doubt Hyundai sees the future of all these services moving from car-based solutions to phone-based services, delivered by 3G instead of GPS--but for now, Blue Link carves out a distinct piece of in-car real estate that competitors like the newly unshackled OnStar are eager to conquer for themselves.

The Blue Link platform will make its debut later this year in the 2012 Hyundai Sonata and 2012 Hyundai Veloster three-door, and the automaker says that it will be available on the majority of the lineup by the 2013 model year. Subscription fees haven't been announced, but it's expected to be offered free for three months to new Sonata and Veloster owners as it launches.