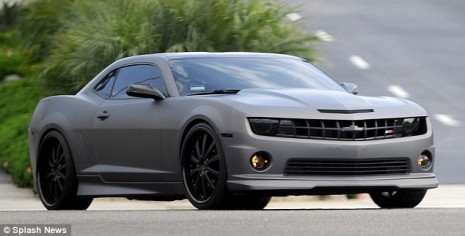 You may recall our story last month about soccer star David Beckham selling his modified Porsche 911 Turbo. We can now reveal why: it appears Beckham is using part of the $217,100 garnered from the sale of the Porsche for a new 2011 Chevrolet Camaro.

The V-8 powered Camaro SS, which in the spec Beckham ordered retails for about $55,000, is finished in a matte gray paint scheme and has been fitted with glossy black wheels and tinted windows and lights.

Beckham has just started driving the car as he has been at home in the UK for the past three months and only returned to the U.S. in the past couple of weeks to start training for his current team, LA Galaxy.

Other cars in Beckham’s collection include a Cadillac Escalade, Jeep Wrangler, a Rolls Royce Phantom Drophead Coupe, another Porsche 911 Turbo and a Range Rover Sport.