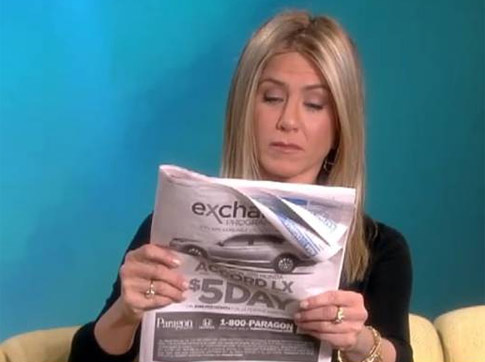 Jennifer Aniston on The View

Jennifer Aniston dropped by The View several days ago, and the interweb has been in a minor tizzy every since. Not because of anything she said, of course; Aniston isnt' exactly the kind to raise eyebrows with wacko pronouncements. (You want that, you book Jennifer Love Hewitt. Even better: Jennifer Lopez.)

No, Aniston generated a stir by holding a copy of the New York Daily News. In fairness, that does seem a little odd and potentially newsworthy, but it gets better, because a Honda dealership in Queens had taken out a full-page ad on the back. Which means that when Aniston rifled through the paper, she flashed The View's viewers a big ol' ad for Paragon Honda.

Of course, the incident was a complete fluke -- Paragon didn't make any sort of arrangement with Aniston, and from what we can tell, Aniston didn't mention the dealership by name, she only held up the newspaper. But that hasn't stopped Paragon's general manager, Brian Benstock, from talking to the press about what an amazing coincidence it was. (Less surprising: the New York Daily News has done the same thing.)

Aniston's current movie seems to be doing well at the box office -- better than usual -- but if the next one tanks, maybe she's got a second career as spokesmodel for something other than water.