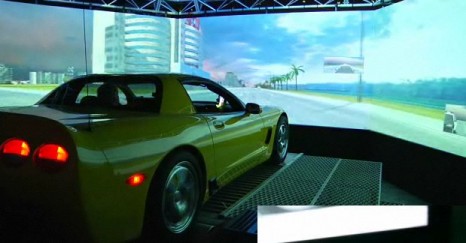 Driving sims have come light years since the original Test Drive hit the scene in 1987 and other progenitors of the genre. But what's the next step? Apparently, driving a real car in front of a giant screen...at 150 mph.

Perched atop a dynamometer, the simulator, engineered by TAG Systems, features a Corvette Z06 driving under full power in a panoramic virtual environment. The system can even be networked to others, allowing people to race their actual cars in a risk-free environment. The car is even bolted to the dyno with a set of aluminum clamps over the suspension arms to minimize the risk of rocketing off the rollers.

The front wheels sit on pads that rotate, attached to potentiometers on the wheels that measure steering angle. We're not sure how accurate the physics model is, but we're not sure we care either.