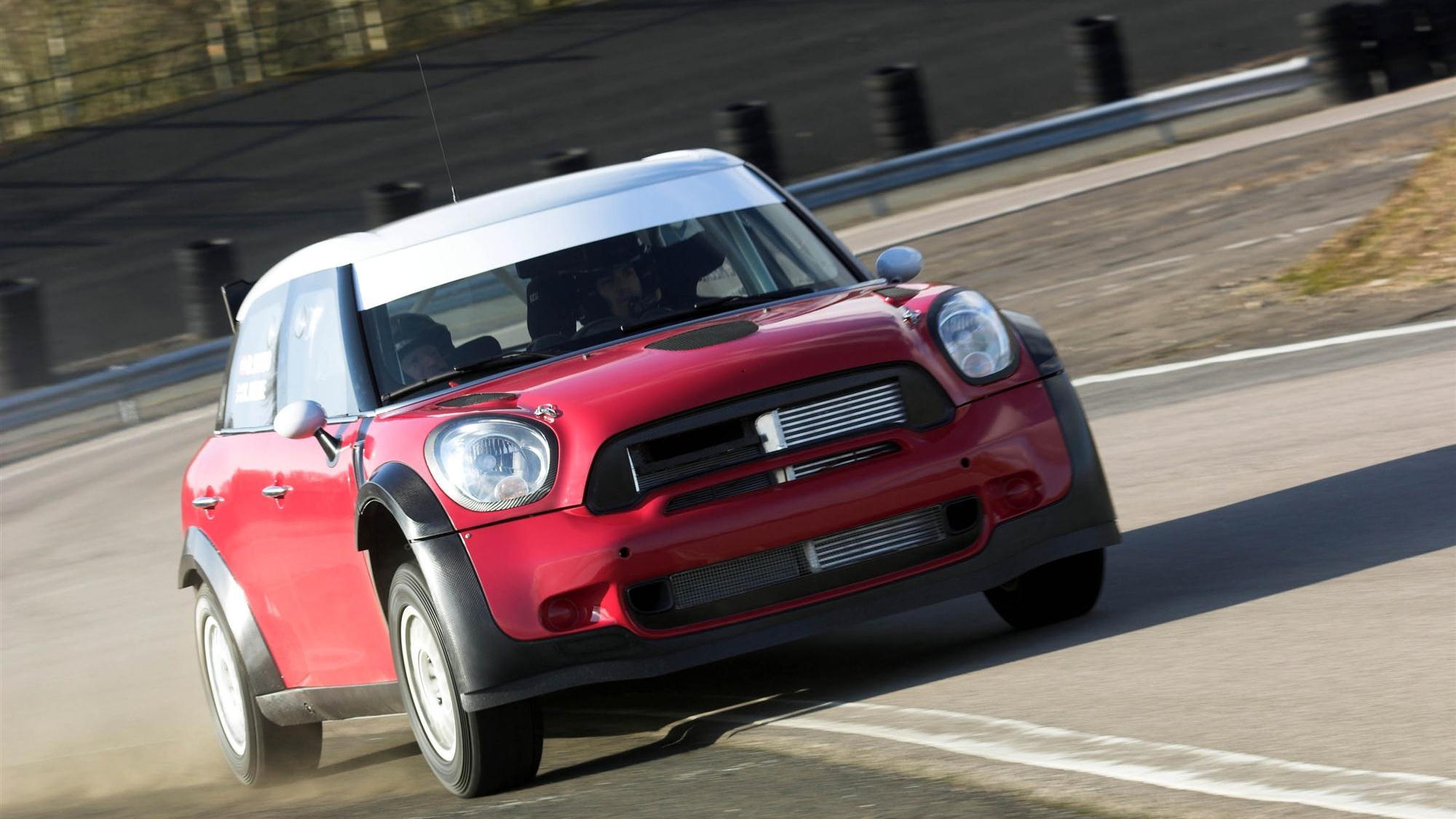 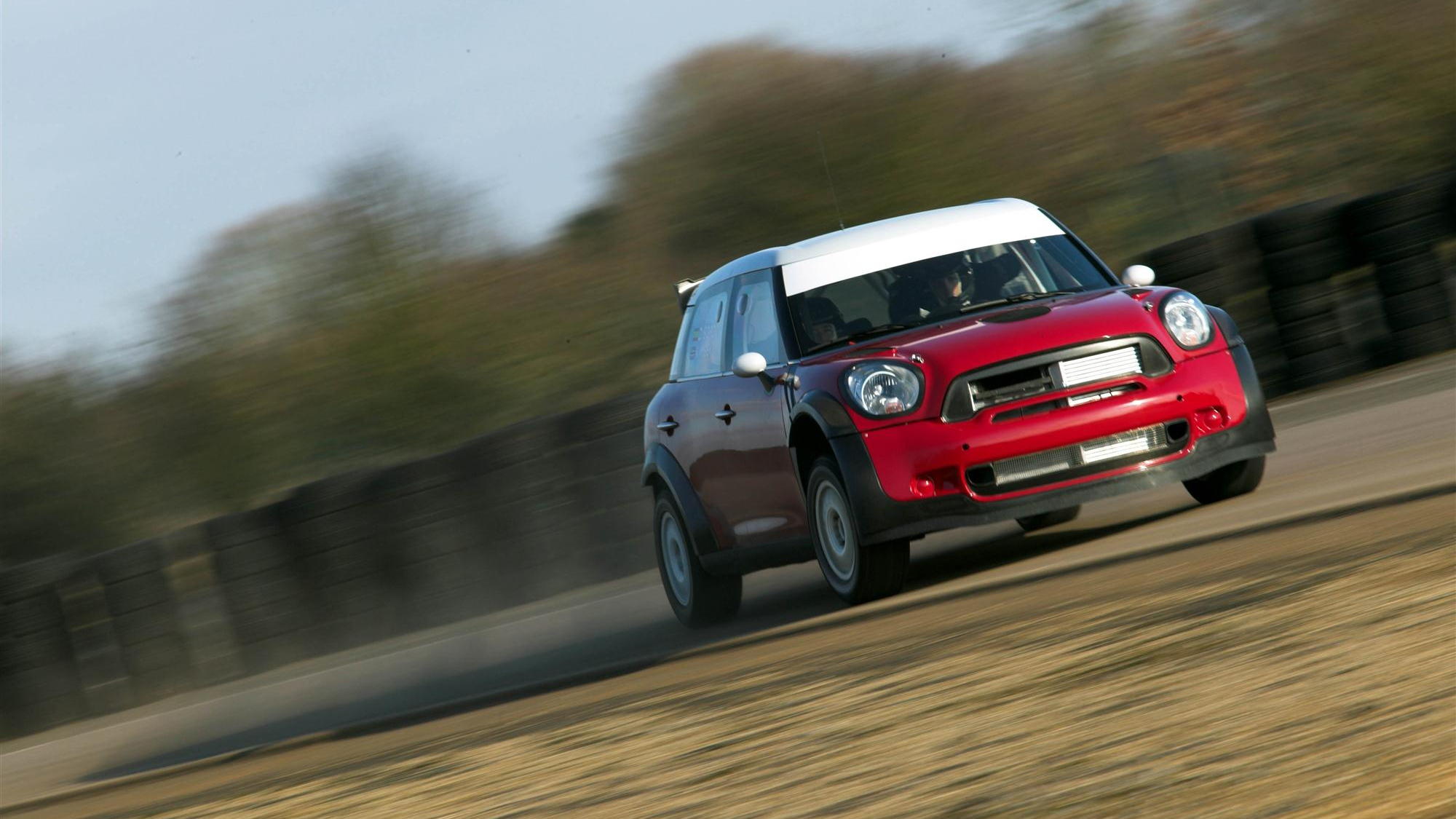 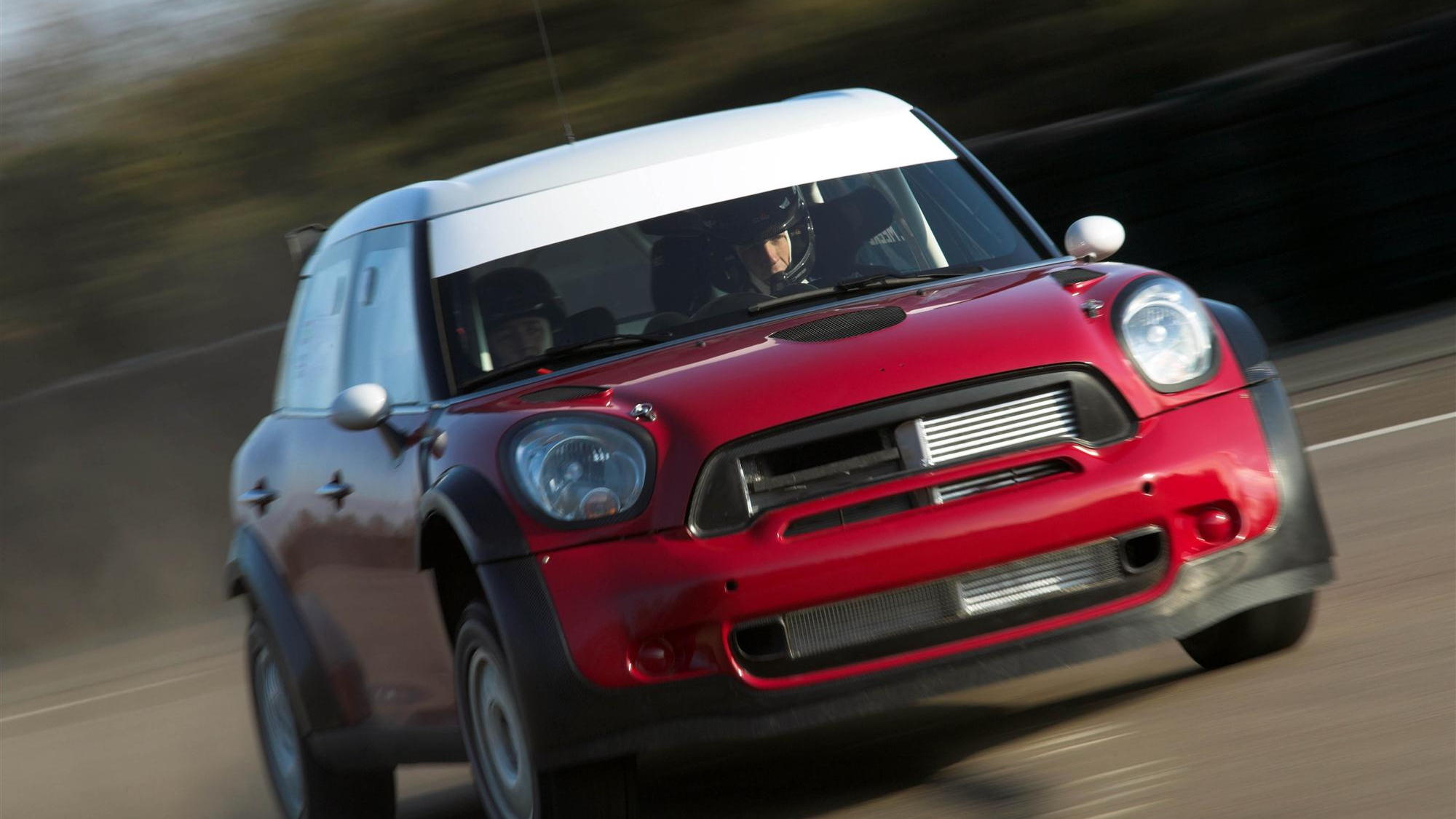 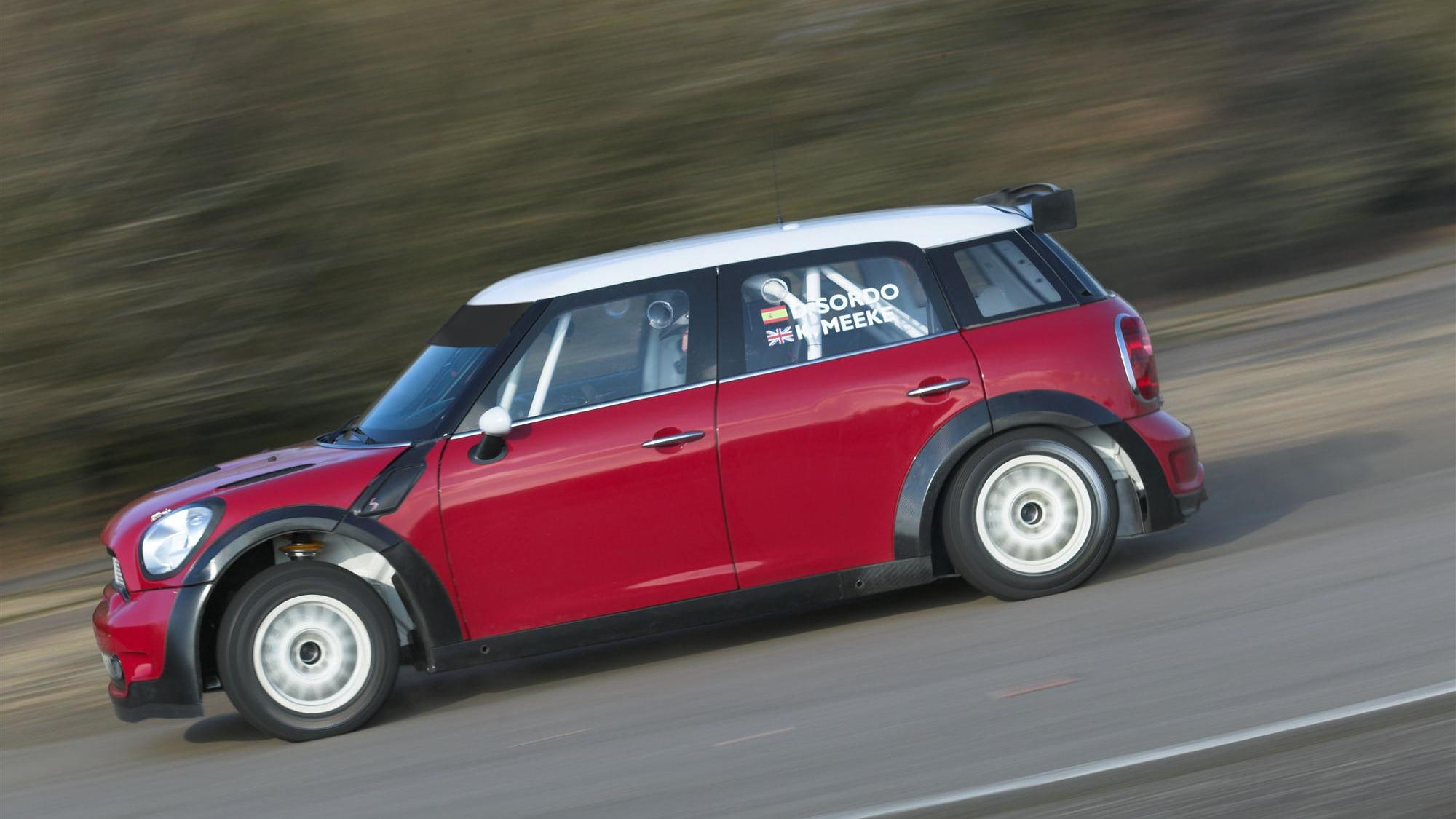 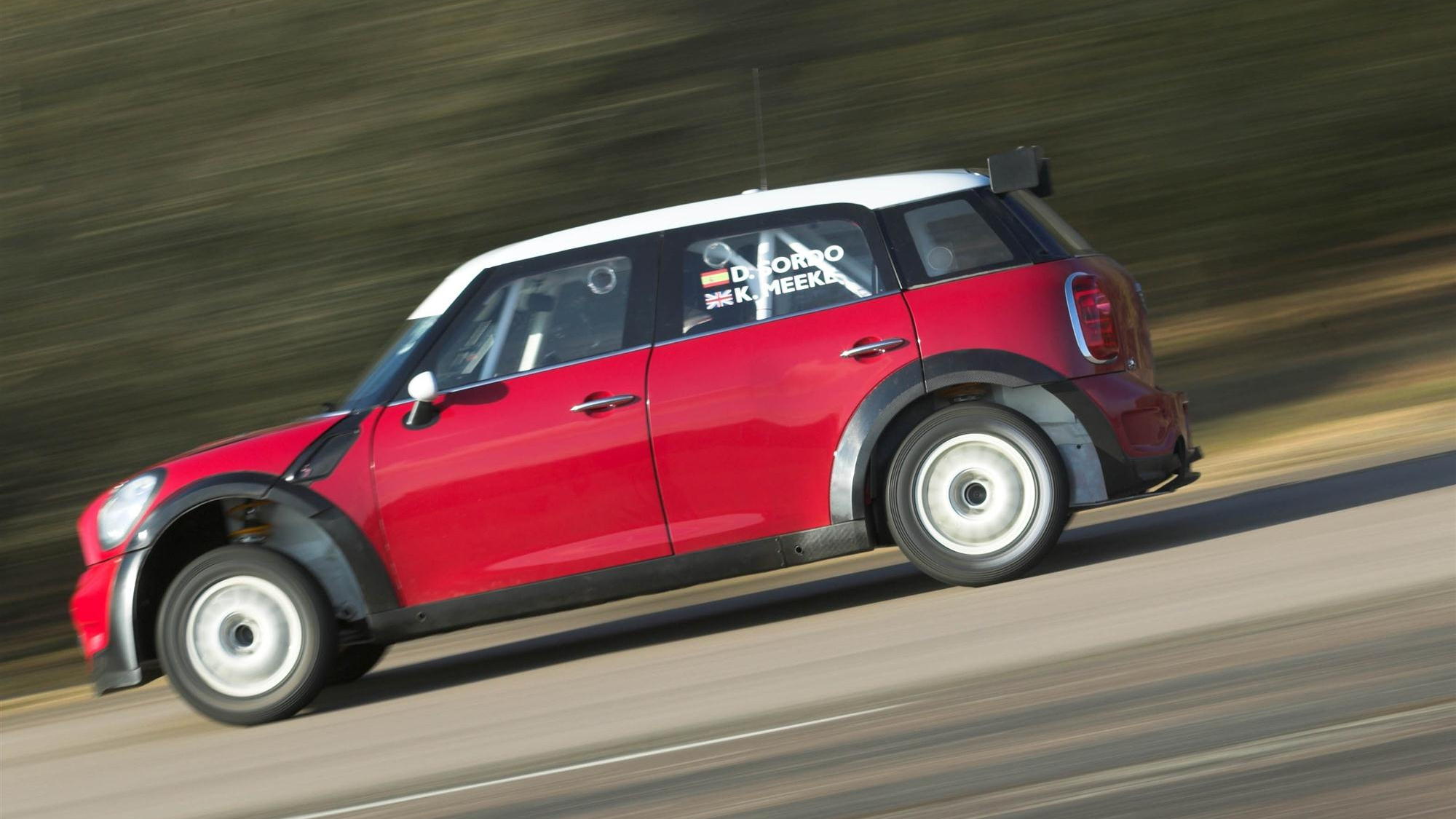 Monte Carlo is one of the classic homes of rally racing, and the original Mini was no stranger to its wiles. The new MINI WRC isn't, either, now that the two have shown off at the Rallye Monte Carlo Historique.

Posed beside its forerunner, the new MINI WRC looks gargantuan, despite being based on the still relatively compact Countryman. The new MINI rally car, as we've detailed, will compete in a handful of World Rally Championship events this year before running for the title in 2012.

There are also rumors a production version of the MINI WRC could be launched, inspired in part by homologation requirements of the FIA. Whether that pans out or not, the MINI WRC is an impressive vehicle in its own right--but so is its truly mini ancestor, as the gallery below shows.

Kris Meeke and Dani Sordo will pilot the MINI WRC this year, hitting an as-yet undisclosed handful of events to get the car in prime tune for 2012's assault.

MINI SAYS MERCI TO THE MONTE – at the Rallye Monte Carlo Historique with Rauno Aaltonen.

Munich. The Monte Carlo Rally celebrates its centenary this year. MINI was keen to be among the well-wishers, and the brand entered a team in the Rallye Monte Carlo Historique. Finnish legend Rauno Aaltonen – winner of the Monte in 1967 in a Mini Cooper S – emerged victorious. The “Rally Professor”, as Aaltonen was dubbed on account of his precision and attention to detail, recruited Austrian Helmut Artacker as co-driver in his 1969 Cooper S, and the team had the support of a four-strong service crew through the highs and lows of the event.

As is customary for the Monte Carlo Rally, the cars travelled to Monte Carlo for the special stages from five different cities. The MINI team were handed Marrakech as their starting point, leaving them over 2,600 kilometres to cover just to reach the start line in Monte Carlo. “The whole atmosphere was very cordial and friendly, both with the locals in Morocco and the organisers, and among the competitors. It was a bit like The Arabian Nights,” said Rauno Aaltonen, describing the start of the event in the North African country. From Morocco, where they were given a police escort through some of the towns, the route took the team over to Algeciras in Spain and on to Alicante. That marked the beginning of a 30-hour stage via Barcelona and the Pyrenees to the Maritime Alps, and on to Monte Carlo. However, before they could get under way, the Rally Professor had some duties to fulfil. A big crowd of fans had massed at the port, despite the early start, to ask Aaltonen for his autograph. “I’m really happy to oblige, even if my long name makes it all a bit hard work,” joked the Finn.

A warm reception greeted the cars in front of Barcelona cathedral, before they continued up into the mountains. “We had no idea that a minor version of hell was lying in wait,” recalled Aaltonen. The Pyrenees welcomed the competitors with heavy snow, and the first runners had to wave the white flag in the face of steep climbs and the slippery road surface. The Mini also required some serious persuasion to stay on route. “It didn’t really matter which pedal I pressed,” sighed Aaltonen, describing the vagaries of driving in the snow. However, the wintry weather was mercifully shortlived, and the drivers were clear for the night run to Monte Carlo.

All was quiet at Quai Albert I when the Mini team arrived, but it was a rather different scene at the same location the following day. The classic cars stood door-to-door along the Monaco waterfront, the first time they had lined up together during the event. Teams had travelled from Reims, Warsaw, Barcelona and Glasgow to join the Marrakech starters, making a field of 328 cars in total.

On the itinerary the next day was the opening loop around Valence. Approaching the first special stage, the participants were interested to see snow draped over oncoming cars. Indeed, more than 10 cm of the white stuff had settled on the tight and twisty roads. As the team had yet to fit any spikes on the car, they were unable to reach the target average speed for the stage. “We had zero traction and a drop of several hundred metres to the side of us,” explained Aaltonen. “So we decided to make sure both we and the car made it through in one piece and didn’t push too hard.” After the morning snow, the afternoon saw a bizarrely formed mountain attract most attention. “It was like something I’d imagine finding on the moon,” ventured the rally master. “But that’s the unique thing about the Monte: every mountain is totally different from the one before, and demands different techniques and skills.”

The next day the weather was fine and dry, which came as some relief, since the loop around Valence is famous – infamous, even – for its constant succession of corners. “It’s just bend after bend, and no straight sections; there’s no need to get the steering wheel dead-centre at all,” said Aaltonen of the 350-kilometre route over the hills around Valence. And there was more of the same for the drivers and co-drivers on the final day over the return leg to Monte Carlo. By that time, many minds had already turned to the night start in Monaco, and the climb up to the Col de Turini. Here, there’s always a chance the rules might hold a few surprises, as Mini drivers have discovered in the past. And it’s easy to see why this final section of the rally has also become known as the “Night of the Long Knives”.

“A lot of things look much the same as in the 1960s,” reflected the 1967 Monte winner. But this event does do some things rather differently: “Then it was all about top speed. In the Monte Historique regularity is the key, although the required 50 km/h is very difficult to achieve on some sections.” There have also been one or two changes when it comes to the materials used by the teams – in terms of both quality and quantity. “Up to the mid-1960s there was no limit on spikes, and I had as many as 600 spikes on a wheel,” explained Aaltonen. “Plus, we had 1,200 tyres ready and waiting on rims for our three competition-trim cars.” So what inspires somebody who has already won the Monte to return again over 30 years on? “It’s an honour for me to congratulate the Monte Carlo Rally on its centenary. And there’s always a special excitement around the place when it’s rally time. That comes not only from the cars, but also from the contrast of glamorous Monte Carlo and the natural beauty of its surroundings.” So could the Finnish master imagine competing in another Monte one day with the new MINI WRC car? “That would be very exciting – I’d love to!”

MINI returns to Monte Carlo with old and new models.

Monte Carlo, 2nd February, 2011. MINI is back in Monte Carlo and this time it is the iconic version that won the famous rally in the sixties meeting up with the latest MINI WRC that sees the brand back on the world rally stage. Rauno Aaltonen (FI) was driving the 1960s version when he was greeted at the end of the Rallye Monte Carlo Historique in the early hours of the 2nd February by Kris Meeke (GB) and Dani Sordo (ES), the drivers who will revive the brand’s rallying tradition this year.

For Meeke and Sordo this is a stop on what is a busy schedule leading up to the first appearance of the MINI WRC on selected FIA World Rally Championship events in 2011, prior to a full assault on the championship in 2012. However, before that they will be heading from Monaco to Spain to put their brand new test car through its paces. Then on the 13th April comes the official launch of the MINI WRC Team at the plant in Cowley, Oxford (GB) where MINI models are produced.

Aaltonen, who won the 1967 Monte Carlo Rally in a works Mini, covered 4,101 kilometres on the rally that took him and his co-driver, Helmut Artacker, from the start in Marrakech on the 26th January to the principality’s harbour for the finish in the early hours of the 2nd February. His comments on the event were: “It has taken us a long time to get here and it was a good trip. In the old days a Mini in rallying form was rather uncomfortable, but in this Mini we had modern shock absorbers and it was so comfortable that after over 4,000 kilometres I am not tired at all. There was snow in places, but we were not told about this so we did not have the appropriate tyres and so lost over a hundred places. It was really busy on this last leg, we were really fighting hard and it was a great atmosphere.”

Also in Monte Carlo to greet Aaltonen was another famous Mini driver, Paddy Hopkirk from Northern Ireland, who won the Monte Carlo Rally in 1964. Remembering that time he said: “It is very interesting to be here and I was delighted to see Rauno looking so well and the car looking so good. It is just great to see it all being revived. When we won it was not just motorsport news, but front page news and I even got a telegram from the Beatles and the Prime Minister and I was given the keys to Belfast. I do admire the talents of these guys. Kris took me around the Prodrive test track in the MINI WRC and it was absolutely fantastic.”

Meeke and Sordo are both keen to start their rally programme. “It is great for Dani and me to be competing for MINI and taking up that legendary spirit . Everything is going extremely well and I think the fundamental DNA of the car is very, very good. At this early stage of the development everyone is really excited as it seems to be hitting all the targets that were set out in the development phase, ” said Meeke.

Sordo was also relishing the task ahead of him: “I have driven the car less than Kris but I have been on both tarmac and gravel. Honestly the feel of the car was really good. We still need to improve in certain areas, but this is normal because the car is new. Our MINI is new to rallying but in Prodrive we have a lot of experience and they have achieved many things in the sport. Kris and I will try to do the best we can. At the moment the car is really good and getting better and better.”

The MINI WRC is based on the MINI Countryman and is powered by a 1.6-litre turbo engine derived from the MINI production models that has been developed by BMW Motorsport for use in series running to the FIA Series2000 Regulations, which also includes the FIA World Touring Car Championship. The MINI WRC has been developed by Prodrive, one of the most experienced and respected operations in rallying. This UK based company from Banbury has no less than six World Rally Championship titles to its name.