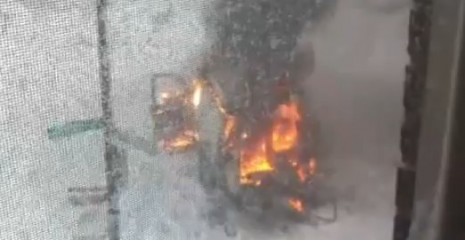 Van catches fire after getting stuck in Chicago snow

Those of you in the many snowbound cities across the north and midwest this morning know just how inconvenient the wintry precipitation can be. But at least it didn't set your car on fire.

One unlucky van driver in Chicago can't say the same. Stuck in the snow in an intersection, the driver enlisted the help of some passersby to push the van to safety. To their surprise, the vehicle burst into flame, likely due to the frantic efforts of the driver to get it un-stuck from its icy prison.

This video, shot by Lauren Rusco from her apartment overlooking the inferno, captures the paradoxical snow-induced fire as the van is quickly engulfed, exploding periodically as the fire hits various pockets of fuel and flammable liquids.

We'll keep you posted on the how and why as we learn more.