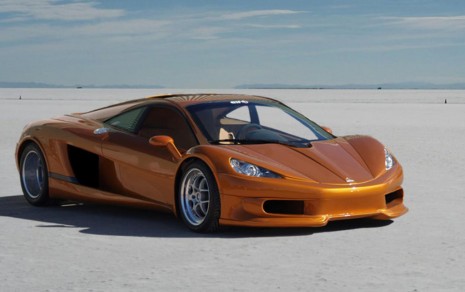 We've been bringing you news on the Canadian-built HTT Plethore LC-570 supercar for over a year now, including its recent appearance in a Mentos commercial, of all things. Now we have official video of the car rolling down a winter-wasted Canadian highway.

Set to some rather hum-drum rock music, it's not exactly all that exciting until the music finally fades out and you remember the car's stats as the mellow exhaust note takes over: powered by a 750-horsepower version of GM's 6.2-liter supercharged LS9 from the Corvette ZR1, mounted amidships, driving the rear wheels through an aluminum six-speed gearbox and an aluminum rear LSD, the beastly Plethore weighs in at just 2,535 pounds.

AP Racing six-piston front brakes and four-piston rears, 275/30 19-inch tires front and 345/25 20-inch tires rear handle stopping and turning duties. But it's the interior of the car that really makes the Plethore special.

Featuring a three-seating layout like the McLaren F1, the Plethore also uses a camera-based rear-view system, automatic remote opening and closing scissor doors, and more electronics than your typical small-shop supercar, including memory settings for the mirrors, windows, and seats, plus an electronically adjustable suspension system.

The whole ball of wax will run $450,000 Canadian dollars, or about $447,975 US dollars at current exchange rates--and you'll have to pick it up in Montreal, then get it imported and road-legal.