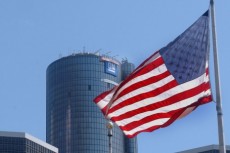 Sparing further financial jargon, the stock sale means that General Motors will once again be a publicly held company, with the majority of the shares, roughly 263.5 million, being sold off coming from the U.S. federal government's stake in GM, gained as part of its bankruptcy bailout procedure. The Canadian Government and the UAW will also sell off some of their stock, accounting for the remaining 101.5 million shares.

The IPO announcement comes on the heels of GM's third quarter profit results of $1.9-2.1 billion on $34 billion in revenues. For the first nine months of 2010, GM estimates it has taken in $99 billion in revenue and delivered a net income of $4.0-$4.2 billion.

For those so inclined, a full copy of the press release (with all the financial jargon) can be found on page two.

The offering will consist of 365 million shares of common stock to be sold by certain of its stockholders. The company will also issue 60 million shares of its Series B mandatory convertible junior preferred stock with a liquidation amount of $50 per share.

Unless converted earlier at the option of the holder, each share of the Series B preferred stock will automatically convert on the mandatory conversion date, which is expected to be three years from the original issue date.  The conversion provisions depend on the applicable market value of the company's common stock, and are subject to certain anti-dilution adjustments.

Morgan Stanley and J.P. Morgan (representatives of the underwriters), BofA Merrill Lynch, Citi, Goldman, Sachs & Co., Barclays Capital, Credit Suisse, Deutsche Bank Securities and RBC Capital Markets will be the joint book-running managers for the offering.  Copies of the preliminary prospectus relating to the offering may be obtained for free, by visiting the SEC website at http://www.sec.gov.  Alternatively, you may obtain a copy of the preliminary prospectus, by contacting:

General Motors, one of the world’s largest automakers, traces its roots back to 1908. With its global headquarters in Detroit, GM employs 208,000 people in every major region of the world and does business in more than 120 countries.  GM and its strategic partners produce cars and trucks in 31 countries, and sell and service these vehicles through the following brands:  Buick, Cadillac, Chevrolet, FAW, GMC, Daewoo, Holden, Jiefang, Opel, Vauxhall and Wuling.  GM’s largest national market is China, followed by the United States, Brazil, Germany, the United Kingdom, Canada, and Italy.  GM’s OnStar subsidiary is the industry leader in vehicle safety, security and information services.  General Motors acquired operations from General Motors Corporation on July 10, 2009, and references to prior periods in this and other press materials refer to operations of the old General Motors Corporation.  More information on the new General Motors can be found at www.gm.com.

In this press release and in related comments by our management, our use of the words “expect,” “anticipate,” “possible,” “potential,” “target,” “believe,” “commit,” “intend,” “continue,” “may,” “would,” “could,” “should,” “project,” “projected,” “positioned” or similar expressions is intended to identify forward-looking statements that represent our current judgment about possible future events. We believe these judgments are reasonable, but these statements are not guarantees of any events or financial results, and our actual results may differ materially due to a variety of important factors. Among other items, such factors might include:  our ability to realize production efficiencies and to achieve reductions in costs as a result of our restructuring initiatives and labor modifications; our ability to maintain quality control over our vehicles and avoid material vehicle recalls; our ability to maintain adequate liquidity and financing sources and an appropriate level of debt, including as required to fund our planning significant investment in new technology; our ability to realize successful vehicle applications of new technology; and our ability to continue to attract new customers, particularly for our new products.

GM's most recent annual report on Form 10-K and quarterly reports on Form 10-Q provide information about these and other factors, which we may revise or supplement in future reports to the SEC.