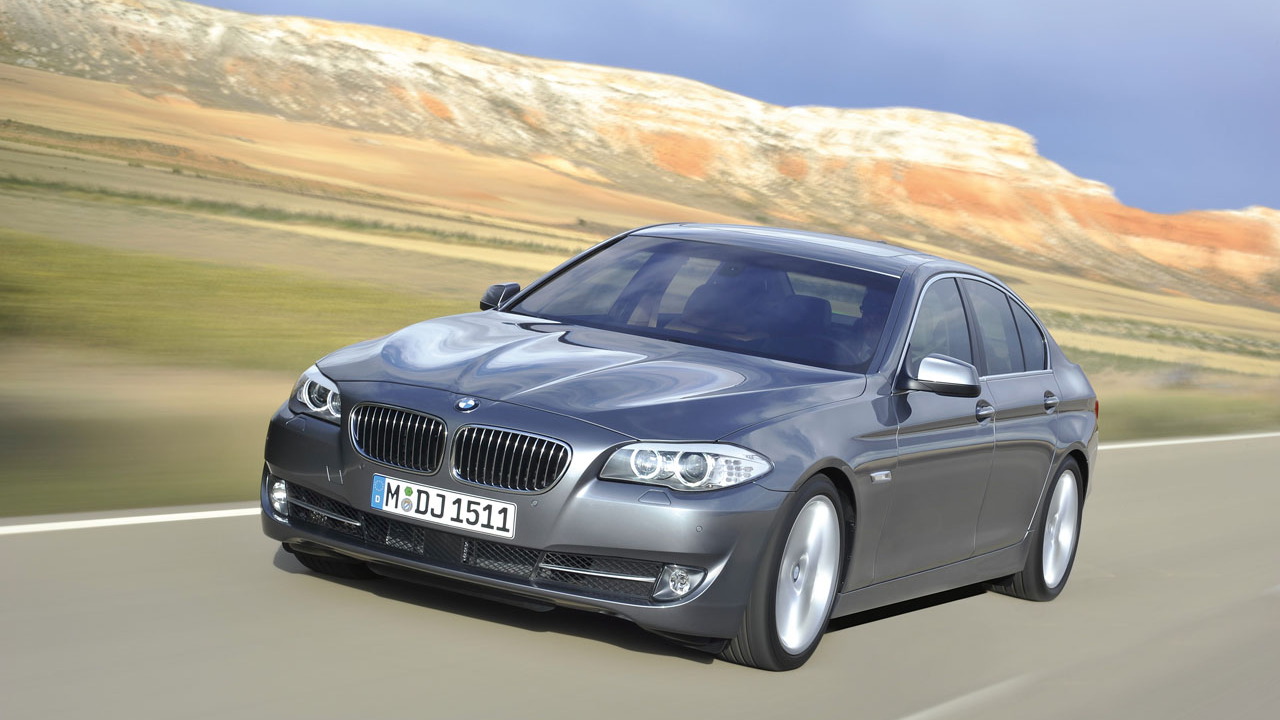 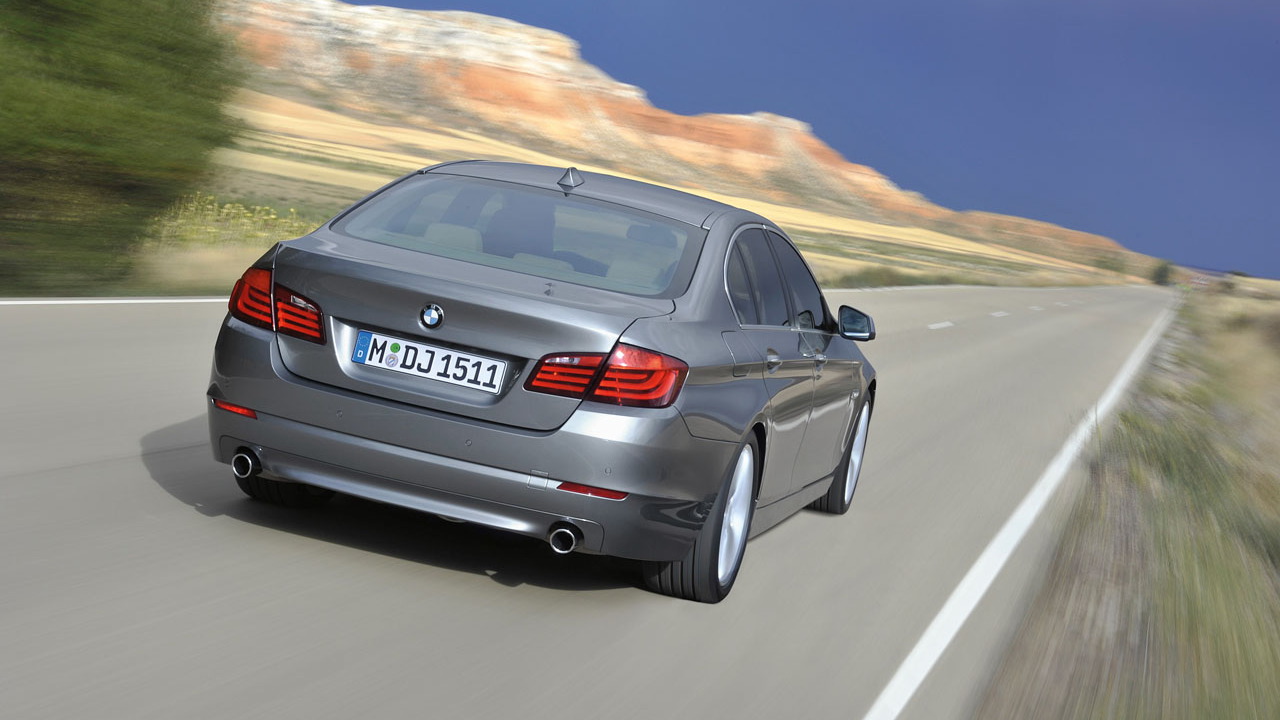 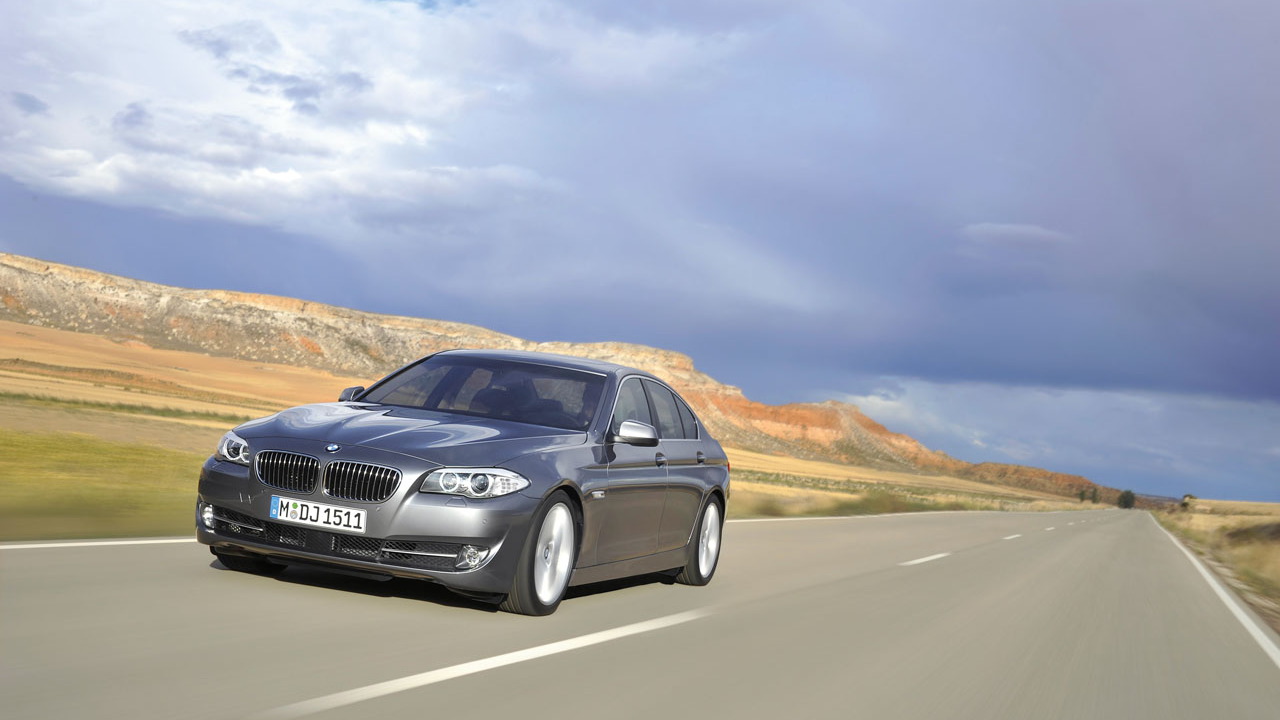 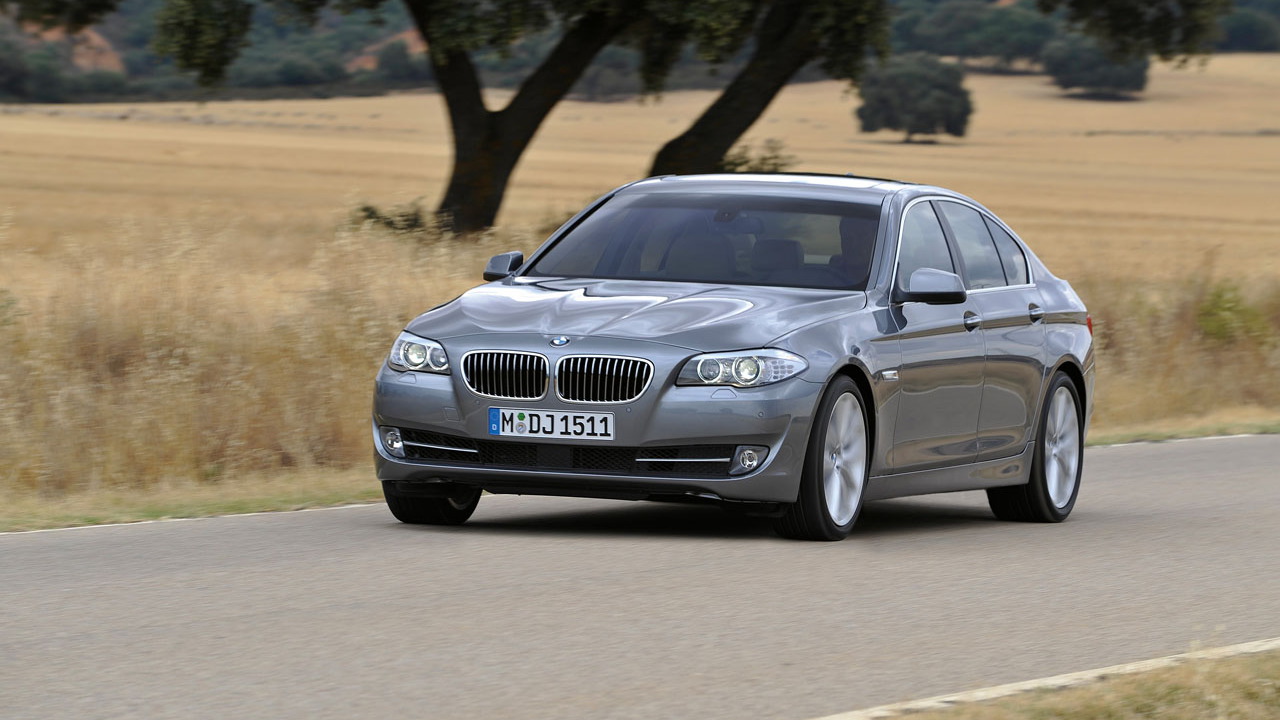 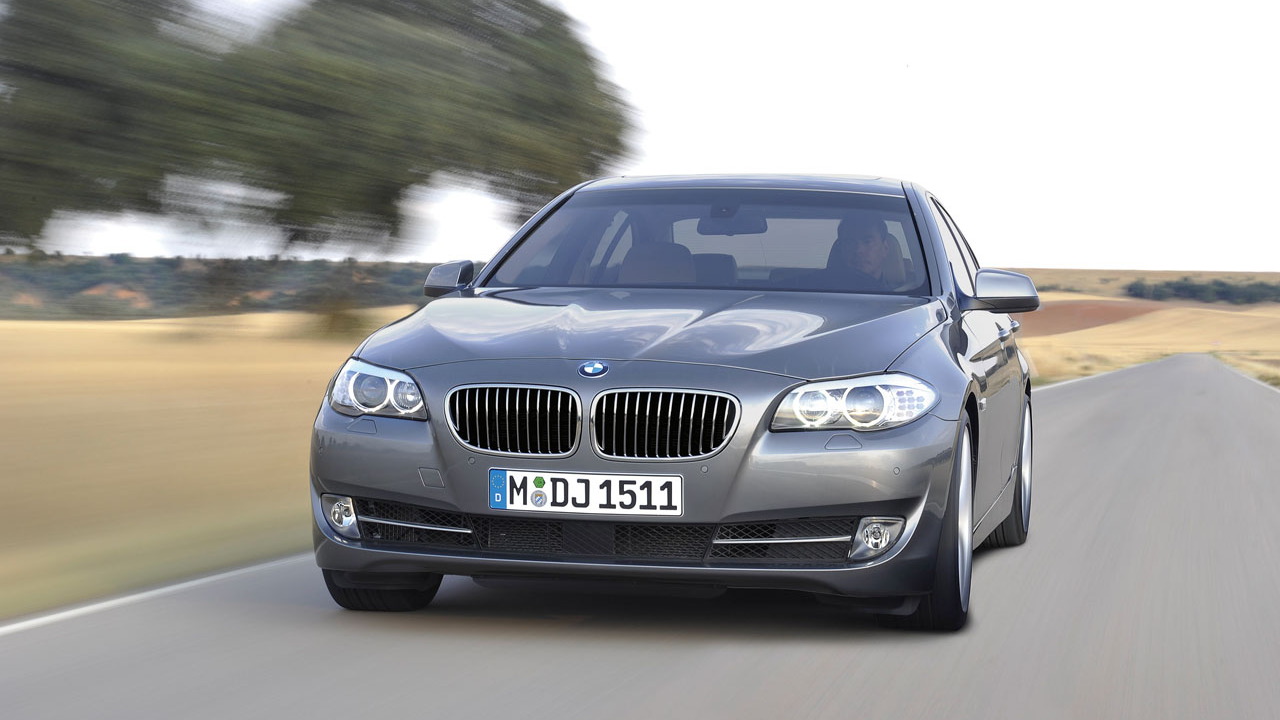 20
photos
We've already had a chance to hop behind the wheel of the 2010 5-Series Gran Turismo, but today BMW has officially unveiled the its less-porky sibling, the 2011 5-Series Sedan, revealing for the first time its official details and specifications.

Like the 5-Series GT, it will feature a platform shared largely with the new 7-Series. That means lots of space, good handling and plenty of appealing style, inside and out, as previewed in the shots leaked earlier today. The new nose of the 5-Series certainly resembles that of the new 7-Series, though the lower air dam/fog light area is styled differently as are the headlights. The grille and surround both retain strong 7-Series cues, however, and the lower side-panel crease running between the wheel wells appears to mimic is bigger brother as well. Despite all these 7-Series cues, however, the overall effect is more like that of the sporty 3-Series once the rear portion of the car and its overall proportions are taken into account, and that's a good thing.

Also like the 5-Series GT, the 5-Series Sedan will feature both the twin-turbo 4.4-liter V-8 engine in a 550i model and the new N55 single-turbo 3.0-liter inline six-cylinder. The big V-8 gets a 400-horsepower and 450-pound-foot rating in this application, while the 535i's six-cylinder checks in at 300 horsepower and 300 pound-feet of torque. A 240-horsepower 528i will arrive later in the year, at the same time the xDrive all-wheel-drive option becomes available.

Both the 550i and 535i will be available with six-speed manual transmissions here in the U.S., a boon to involved and enthusiastic drivers everywhere. BMW's ultra-smooth new 8-speed automatic will also be available for those that prefer a more serene driving experience.

BMW estimates the 550i will hit 60 mph in just 5.0 seconds, and can hit a top speed of 150 mph when equipped with the sport package. Otherwise, the top speed is limited to 130 mph.

Somewhat unusual for a BMW is the 20111 5-Series sedan's suspension arrangement, which gets A-arms up front and a multi-link arrangement in the rear. No typical BMW McStruts here. Unfortunately, electric power steering takes away most of the feel and handling confidence this suspension change provides--at least if the 550i GT is any guide.

A Sport Package includes BMW's Adaptive Drive, which is a package of eletronic driver aids including: Driving Dynamics Control, Electronic Damper Control and Active Roll Stabilization. Integral Active Steering can also be added optionally. For those that like to let it all hang out, an electronic limited-slip differential also kicks in once DSC is fully de-activated.

The new 5-Series will also likely raise the bar in comfort and convenience, gaining over half an inch in rear-seat knee room over the previous model and boasting 18.2 cubic feet of cargo space in the trunk. The 40:60 split folding rear seat also opens up larger-item possibilities.

A key upgrade for the new 2011 model is the addition of BMW's fourth-generation iDrive system. The high-tech, often complicated interface gets further refinement that makes it easier to use while still offering a fantastic depth of features. With output coming through either a 7-inch, 800x480 pixel display or a huge 10.2-inch 1280x480 pixel display, it will be even easier to see all those nested menus.

Inside the cabin, Dakota leather upholstery is standard on the 550i, and comes in six different color schemes, including three new tones. Nappa leather is available as an upgrade. Dark Burl Ash wood trim is the standard, while Ash Anthracite and Fineline Matte are optional extras.

As with any modern luxury sedan, there's not shortage of safety tech at play here either, though BMW will certainly be looking to improve its Insurance Institute for Highway Safety rating of "Marginal" for side-impact ratings due to the lack of standard side air bags on 2008-2010 models. To that end, front,side and side-curtain airbags are all standard for 2011.

Optional safety technology features include: Active Cruise Control with Stop-and-Go, which allows the cruise control to bring the car to a full stop if traffic warrants it, then acceleration back up to speed automatically if stopped for less than 3 seconds; Top View cameras to see all around the car, and Frontal Collision Warning with early brake application when equipped with the Active Cruise Control with Stop-and-Go package. Blind-spot detection, adaptive headlights, lane departure warning and BMW Night Vision with pedestrian detection are also available.