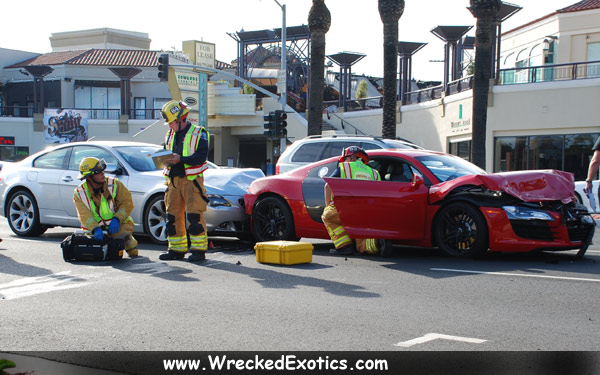 This past week has seen a couple of high-profile crashes reported on Motor Authority, with a Bugatti Veyron and new Ferrari California both ending up worse for wear due to the actions of their clumsy drivers.

Believe it or not we now have an image of a third exotic car involved in a crash, this time a bright red Audi R8 that managed to take out a BMW 6-Series and Range Rover SUV as well.

The accident took place in Costa Mesa, California, just off Newport Blvd. The Audi R8 ran into the back of a Range Rover (not pictured) and was then hit from behind by the BMW, essentially getting sandwiched and hence the damage on both the front and rear of the car.

You can see more images of the damaged R8 as well as several shots of other rare incidents where more than one exotic car is involved.