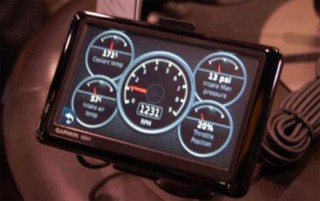 Convergence. It was once a hot-button word in electronics. It has since fallen out of vogue, but the concept is still valid: the consolidation of multiple technologies into a single device as well as the adaptation of analog tech into digital form, lightening the gadget load while duplicating or expanding functionality. The Garmin EcoRoute ESP for the Nuvi navigation unit is a perfect example.

The basic premise behind the EcoRoute ESP is that it taps into any modern car's OBD II port to grab important information and then pipe it to the Nuvi navigation unit in an easy-to-read gauge display format.

As the EcoRoute name indicates, the information can be used to help maximize fuel efficiency, but it can also be handily adopted by enthusiasts to display information such as turbocharger boost pressure, throttle input, intake air temperature and more.

It works by tucking the ESP unit up under the dashboard and connection to the Nuvi unit via Bluetooth to relay the data. It's capable of logging data on any measurable OBD II parameter, making its potential uses almost limitless.

The system is on demo now at SEMA, and will have more information and details released at the 2010 CES show in January. Hit the link to CNet below for the full details.