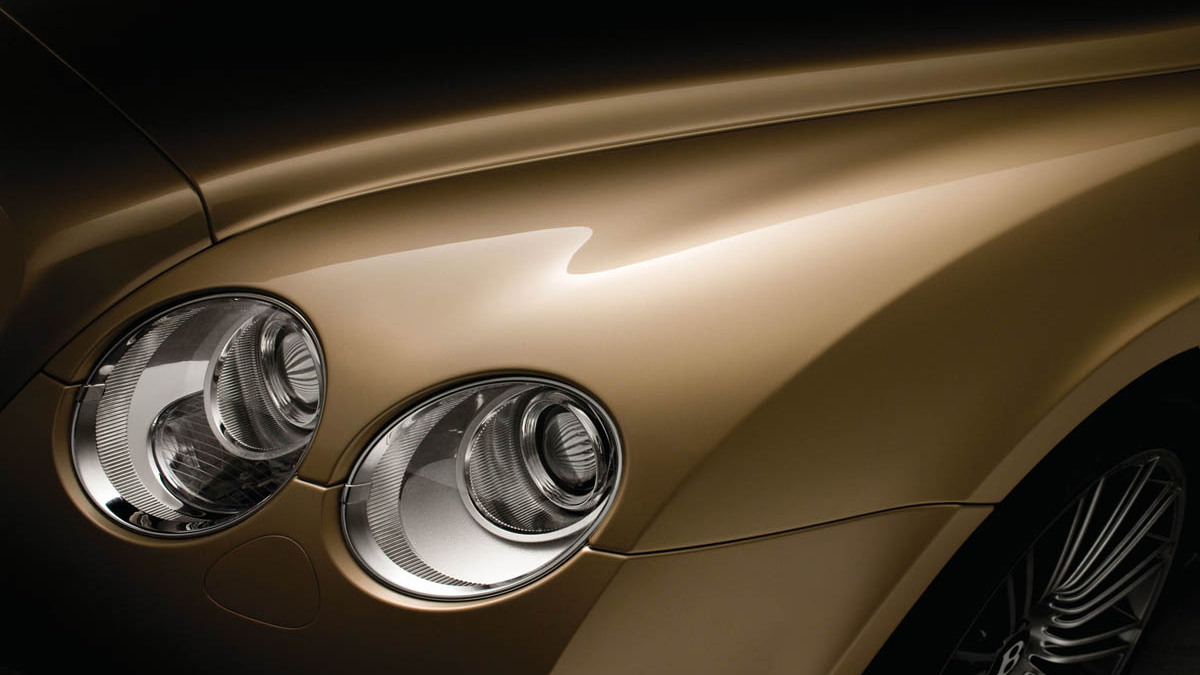 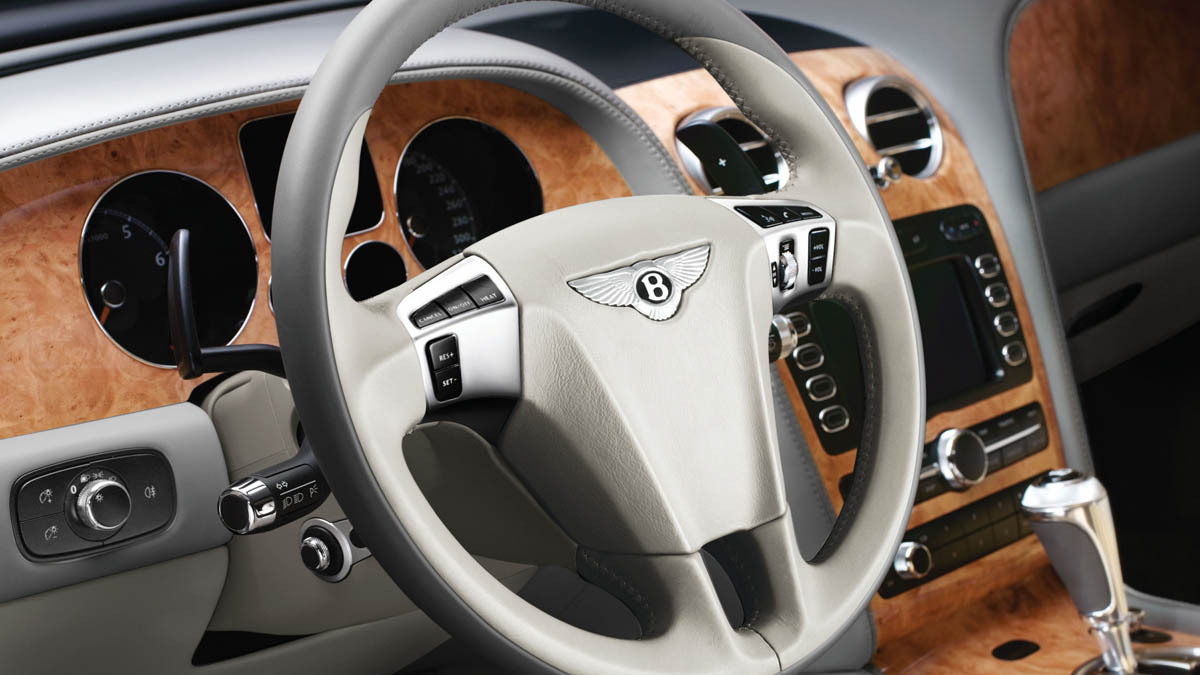 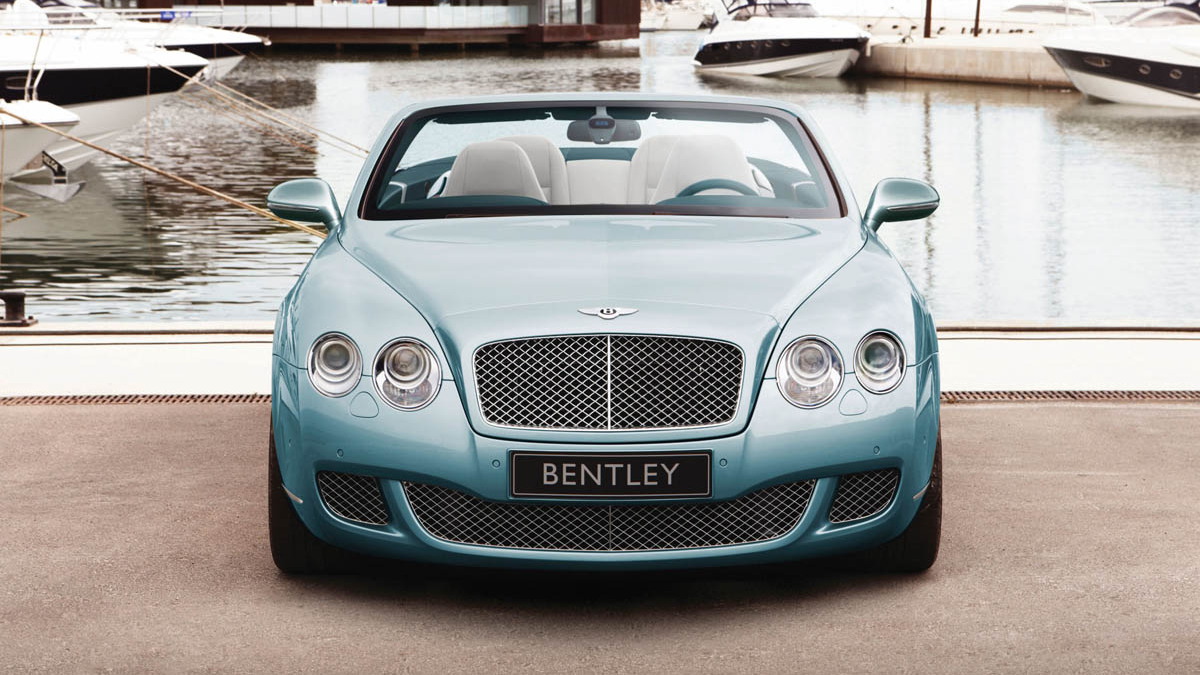 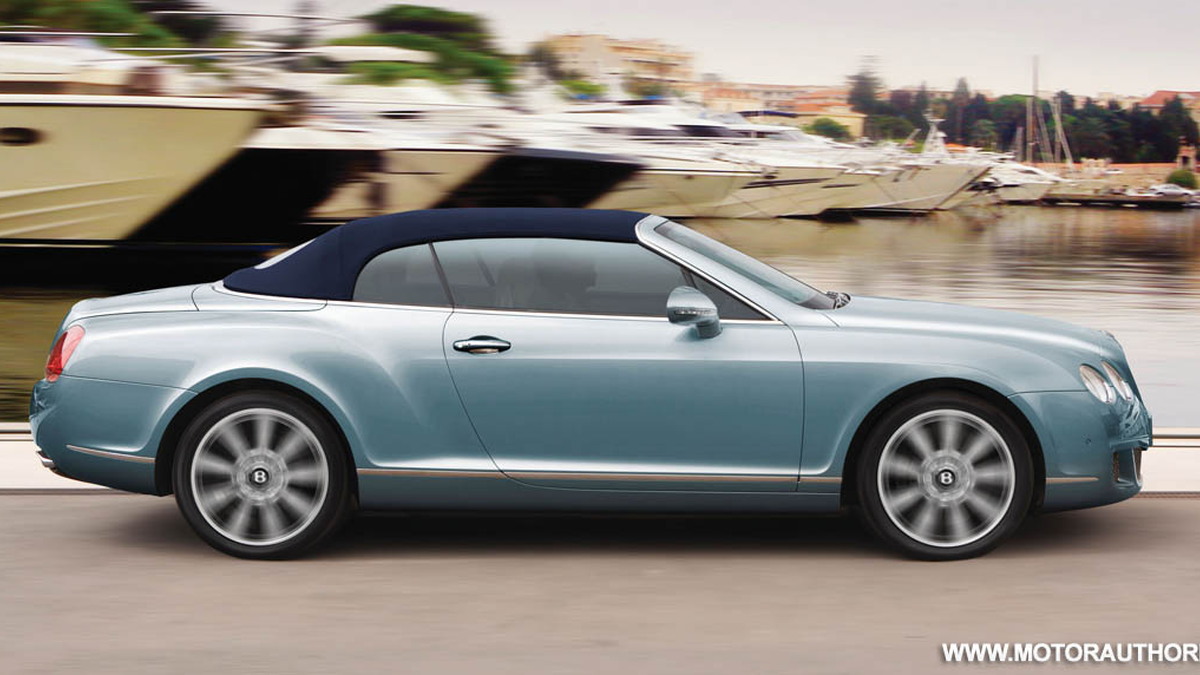 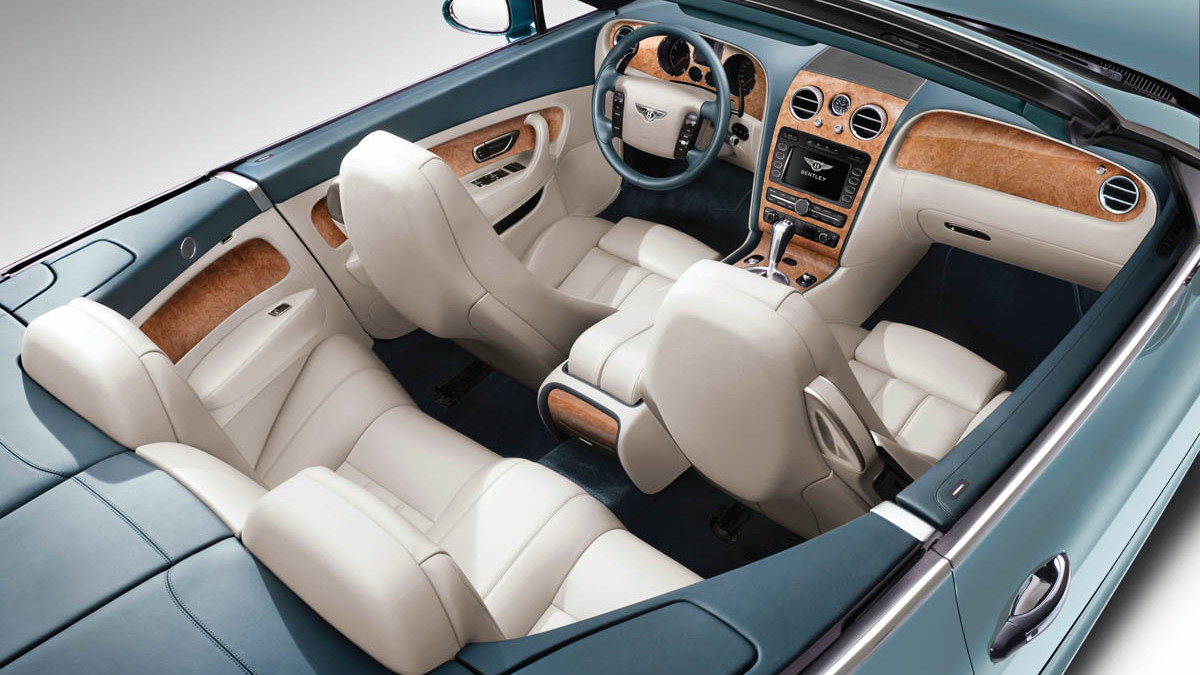 28
photos
There's only one thing Denzel Washington and Kim Kardashian could have in common, and it's clearly not talent-related. Not even videotape-related, so far as we know. It's what they drive - the celebrity vehicle of choice that doesn't come with a big opening weekend and an Oscar nomination, the Bentley Continental GT.

From athletes to actresses to the rare breed in between, the double threat, the Bentley Continental GT's attracted more than its share of famous owners. It's so embedded in the cultural vein of reality TV and pro sports, it's a surprise to see Paris or J-Lo rolling in anything but a Bentley.

For a brief weekend, we joined those celebs and not-so-celebs - thanks to Bentley, which freed up some seat time in the 2010 Continental GT Speed, the latest variant on the Conti theme that's been playing out on freeways and inside Garage Mahals since 2005, when the revived brand bowed with an impossibly grand sports coupe that changed its fortunes. Bentley's reputation had grown fusty: the big Arnage and Azure were relics of the days when Rolls-Royce was Nicky to Bentley's Paris. Enter the Continental GT, and the unthinkable happened. Bentley became chic and savvy.

And we all know what happened to Paris, don't we?

A little Speed music
The GTC Speed probably is the logical finale to the Continental lineup. The coupe arrived in 2005, followed by the Flying Spur sedan and the convertible GTC. Then came Speed versions of the GT and Spur, and now, for 2010, it's the convertible's turn - which in the car world, probably means a new car is about 24 months in the offing.

For now, the hulking GTC Speed inherits the wind of the other Speed editions, and still punches a 195mph hole in the atmosphere - with the top down. And, if you're that brave to hold on to your Fendis, you'll hardly be ruffled when the GTC Speed drops 0-60 mph acceleration runs in 4.8 seconds.

It's all due to a 6.0-liter, twin-turbocharged, W-12 engine teamed to an all-wheel-drive system and a six-speed automatic shifter. The engine is a unique design, and one that’s hugely powerful. In standard Conti GT cars, it issues 552hp (390kW), locomotive numbers that push the 5500-pound Continental to 60 mph in less than 5.1 seconds in all versions. In the GTC Speed, lighter engine components and some turbo tweaks boost power to an even 600hp (448kW). One press of the red "Start" button on its wood-paneled, chrome-crusted dash lets on that something's gone astray underhood in a good way: there's an offbeat lumber in its idle, one that pours out torque with just a little feathering on the throttle. Channeling it all is a six-speed, paddle-shifted sequential automatic that's pretty invisible in its action. A Sport shift mode speeds up seamless gearchanges, pushing power around the four wheels through all-wheel drive and a Torsen differential. With all that heft, and all that heavy petting on the gas pedal, it's more shocking that fuel economy can be as good as 10mpg city, 17mpg highway.

Even more settling is the Conti GTC Speed's retuned steering and suspension for 2010. It's minor stuff--the Speed versions are lower, of course, and the wheels are standard 20-inchers, which requires some fine tweaks. The convertible Speed also features the same air suspension and three-mode ride control (Continuous Damping Control, or CDC) from the Continental range, which helps manage its big-man strengths and weaknesses. It's clear the GTC Speed can hustle through corners, and can handle more than you can on an ordinary road. It's also obvious that doing so on, say, the main drag through Laguna Beach isn't prudent at all. On the few open stretches of canyon roads we could find on a breezy, cool Sunday in its element of Orange County, the GTC Speed felt at ease at any speed, blunting bumps with its sheer mass and turning in quickly. The light steering feel, deep braking potential (you can opt for $16,000 carbon-ceramic discs for ultimate stopping power) and adept suspension are all well sorted out, but they're no accomplices. There's no 5500-pound car that begs for hairpins like D-listers beg for screen time. Along with its mass, the Speed's bright-red paint and its $267,000 price tag worked quite well as speed limiters.

The GTC Speed interior wears Mulliner trim, including quilted leather, lovely turned-aluminum panels on the dash, and gets a knurled shifter knob that's perfect for traffic fun - you'll use it like worry beads to avoid an I-405 meltdown.

Few cars have packed on the pounds as invisibly as the Bentley Continental GT, and few look as good carrying the extra weight. Shearing the roof from the Conti coupe leaves a convertible that's less purely sexy than the hardtop, but the GTC Speed has a laid-back, vintage appeal embellished by sharp pleats in its fenders. Circular headlamps and LED taillamps lighten the shape a bit, but the interior's completely steeped in tradition. Bentley logos, chrome and wood trim span the dual-binnacle dash, which gets a Breitling timepiece - ironic German tonic for its very British interior. The Mulliner Driving Specification shows that even chrome air vent pulls, rich leather and wood, and delicate chrome detailing can be upstaged, what with the Mulliner's diamond-quilted leather seats, knurled shift knob, and a three-spoke steering wheel. In the GTC Speed, Bentley adds darkened metal trim, a rear spoiler, and wider exhaust pipes to the Mulliner spec.

Bentley expects drivers to choose its GTC Speed cars over, say, the Arnage - but Conti drivers aren't shunted into squalor for purchasing the entry-level Bentley. Up front, there's fantastic head and leg room. The size of two Smart Fortwos, the Conti GTC Speed saves ample space for the first two adults to call dibs. It's the other two wedged in back, who may complain - even with the endless headroom and quick-folding fabric roof of the convertible pulled back. The Conti GTC loses about ten inches of shoulder room from the front to the back seats, and knee room is consumed by taller front passengers. The front seats do have power assistance for backseat passengers to clamber in, and there’s a console with cupholders between the rear seats. They may grumble, but the ravishing quality of the leather and wood will quiet most passengers for at least short trips. The GTC's power top that folds in 25 seconds and has indulgent feel and great sound-damping ability; you'll want to exercise it as least as often as the redline, if not more.

The royal wheel
Speed is of the essence with the Continental GTC - but the array of swatches and wood trims and techno options and custom order sheets will give even the leathery, Amex-scarred veterans of the Newport Beach Fashion Island pause.

With the GTC Speed, all the standard features of the GTC are carried over: electronic climate control; Bluetooth connectivity; soft-close doors and decklid; and DVD navigation that also controls climate functions and audio controls and, as a result, leads to some confusing logic while choosing a destination. Sirius satellite radio and a six-CD changer are standard, while a Naim-tuned 1000-watt, 14-speaker audio system is a $6900 option. In this test vehicle, the Naim system didn’t improve sound quality as much as expected, and does not allow the driver to choose settings for bass, treble, and other typical sound qualities.

Be prepared to consult a colorist before ordering, too; all Continental GTs can be specified with a choice of lambs-wool rugs, 17 shades of leather and five grains of wood trim. The Mulliner package of trim adds quilted leather, knurled chrome and turned aluminum panels in place of the wood dash pieces. The Speed offers its own set of paint and trim options, to go with a new finish for some of its chrome trim.

The few options include the Naim audio system; an iPod interface; 20-inch wheels; the carbon-ceramic brakes; and adaptive cruise control. With a base price of $231,400, it's easy to push the sticker on the Continental GTC Speed to $276,405, as with our test vehicle.

So few two-doors offer the interior space and ultra-luxe fittings of the Continental GT, only one rival comes to mind: the Mercedes-Benz CL-Class. The CL-Class blends a classy, conservative interior design with performance that has the straight-line acceleration, if not the handling, to keep up with top sports car models. Both feel hefty and poised on the open road, while the Bentley has the exclusivity edge to go with its cut-above cabin.

Ultimately, it's the Bentley that's gone on to bigger, better things. With panache to spare, the 2009 Bentley Continental GT has an appetite for speed - and fuel - that’s unrivaled among four-seat coupes and convertibles. It's fine enough for royalty - but the Conti GTC's also become a sort of Orange County Jetta, if you're a Kardashian or some other flavor of nouveau riche.