There were two highly tuned Solstice’s at this year’s SEMA auto show that managed to catch our attention. First there’s the Club Sport Z0K, a fun little weekend track car, followed by the GXP-R, perfect for those Sunday drivers who wish they could be down at a track. 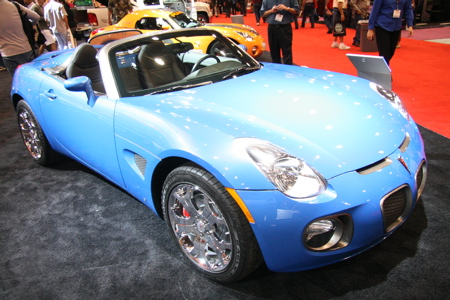 For the GXP-R, modders added a turbocharger, which takes power up to 300hp with 315 lb-ft. of torque, and is countered with a SSBC Performance Brake Package that resides within 19in wheels shod with Goodyear Eagle F1 tires. Visually, the car has been enhanced with new front and rear bumpers, a new grille plus side vents, and is decked out in a bright Hydro Blue.