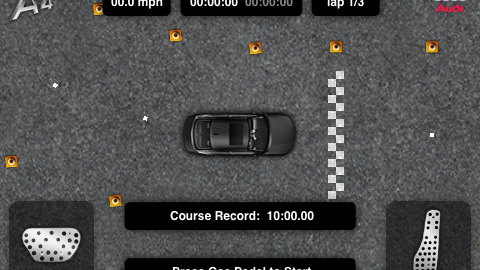 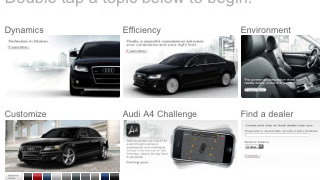 3
photos
Marking the first-ever entry of a carmaker into the field of iPhone applications, Audi has released a new driving game for the platform. Making use of the phone's built-in motion sensors, gamers can steer a tiny version of the 2009 A4 through a range of courses.

Rated at just 2.5 stars out of five on the strength of 76 reviews in Apple's AppStore so far, the game, called 'Audi A4 Driving Challenge' features a top-down view of the car and cone-lined courses similar to U.S. autocross, though considerably less complex. The top-down view and static viewpoint make the driving experience more like that of a remote-control car than a driver's perspective would, but the graphical detail made possible by the two-dimensional presentation is likely somewhat better than a three-dimensional display could be.

The driving game is the latest in a line of experimental advertisements being used by automotive manufacturers, and the first foray into iPhone applications. It is designed to raise Audi's profile among iPhone users - an ostensibly sophisticated segment of the population - as is the company's iPhone-targeted website, custom-designed for viewing from the phone's native web-browser.

"The iPhone is an ideal platform to help introduce the entirely new Audi A4 to the public," said Scott Keogh, chief marketing officer, Audi of America. "Audi customers are smart, sophisticated and technologically savvy. As a brand, we are committed to progress and innovation at every turn. We're very excited to be the first automotive manufacturer to connect with our audience through the iPhone."

The game and website are part of Audi's ramp-up to the sale of the all-new 2009 A4, which starts in the U.S. in September.