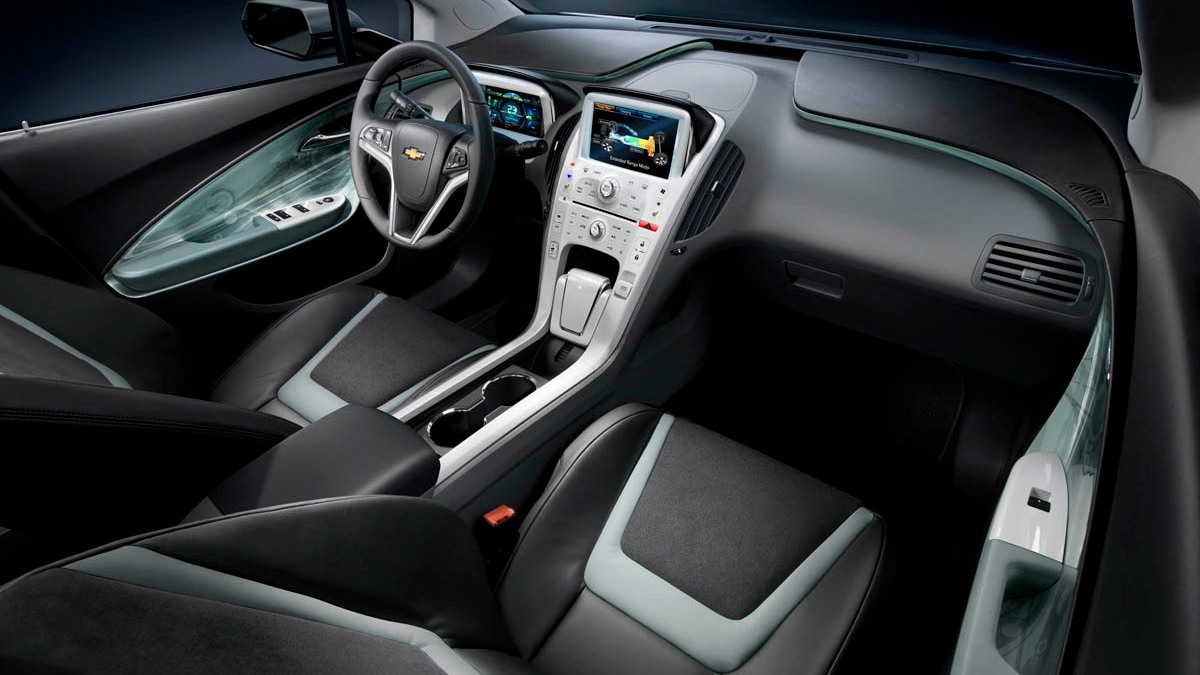 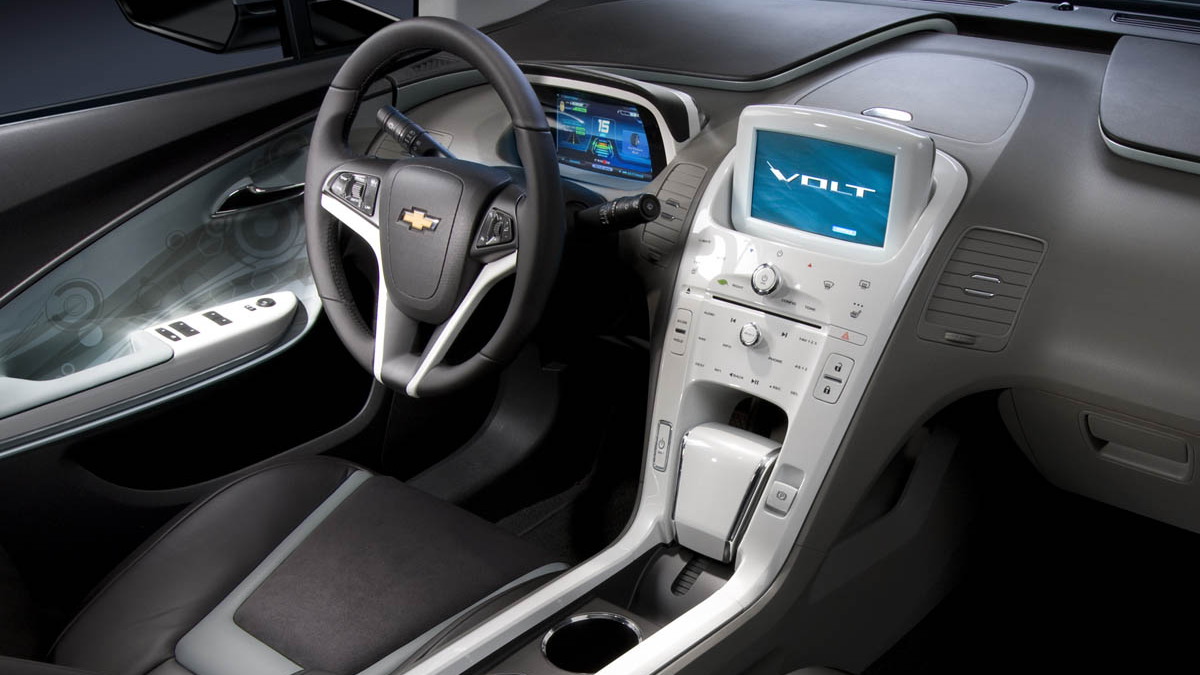 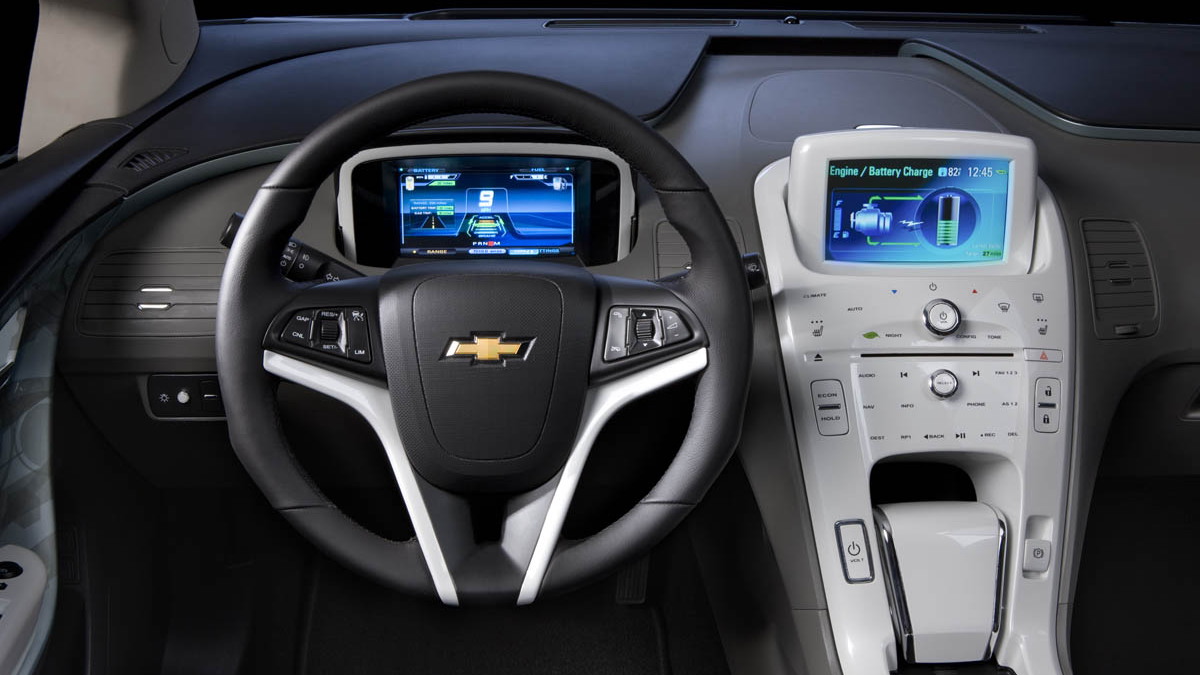 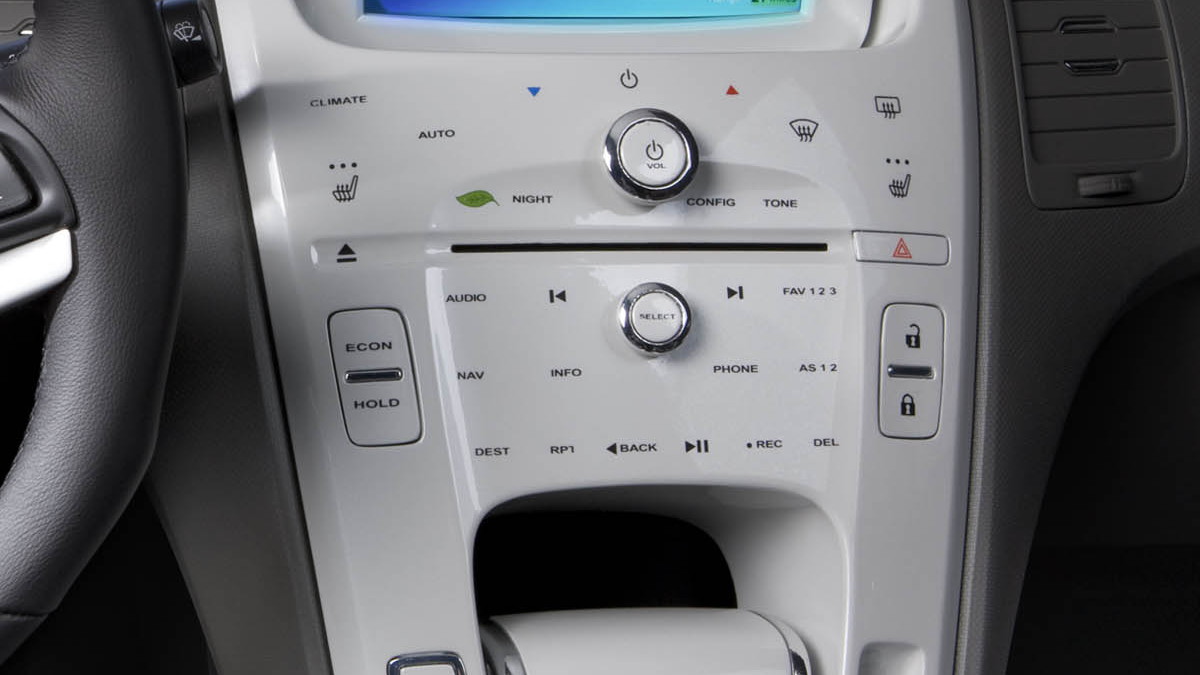 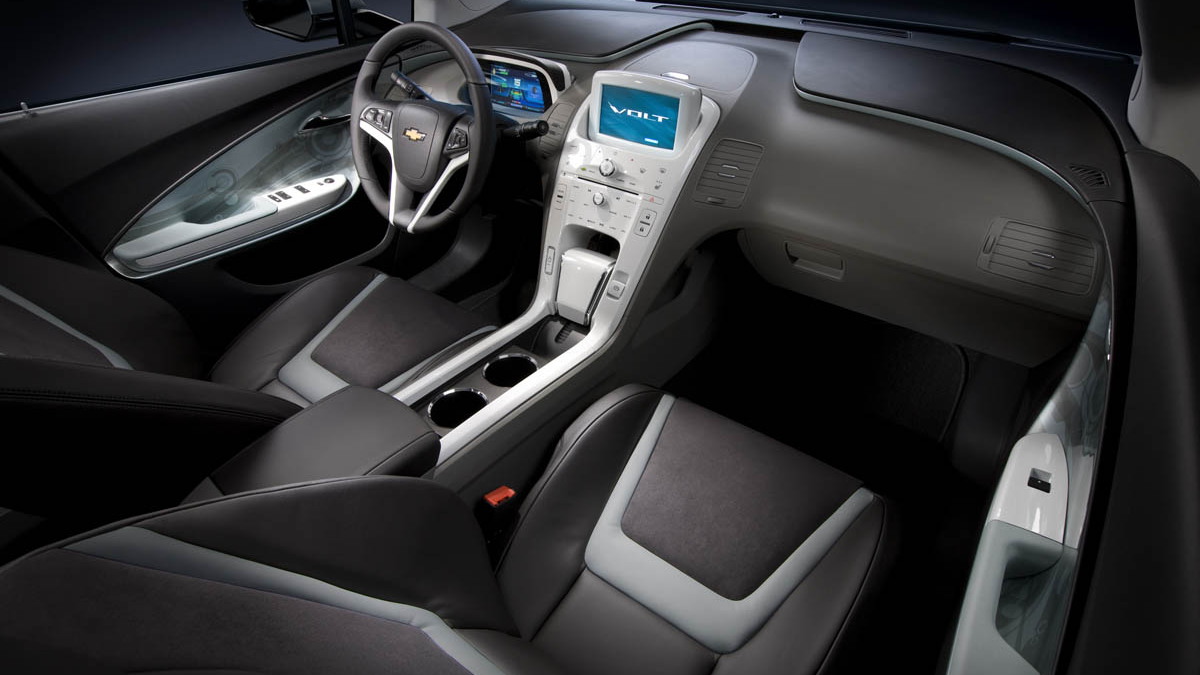 57
photos
General Motors revealed the production version of the 2011 Chevrolet Volt this September as the highlight of its centennial celebration, but until now no official photos of the interior have been released. Today the company revealed what the car will look like to its occupants, and though the vast majority of details have remained the same as earlier photos indicated, there have been some changes.

The primary differences in the new official photo of the interior, when compared to the pre-production interior in the car shown at the official unveiling, and then a week later at the 2009 GM Collection Event in Dallas, TX, include a redesigned cupholder area, a new shape and trim for the gear selector, redesigned switch layouts on the center stack, and reshaped vents on either side of the nav screen/computer area.

All of the iPod-like design quality and futuristic features appear to remain intact, but there is now much doubt over the future of GM and whether the company will even be around in late 2010 to produce the car. GM insists it will find a way through, however, and looking back just two months, there was a great deal of optimism wrapped up in the Volt.

Speaking at the unveiling of the Volt in September, GM CEO Rick Wagoner said, "Revealing the production version of the Chevy Volt is a great way to open our second century. The Volt is symbolic of GM's strong commitment to the future ... just the kind of technology innovation that our industry needs to respond to today's and tomorrow's energy and environmental challenges."

As the Volt is still in development, its specifications could easily change before its expected sales release in late 2010. Nevertheless, GM has revealed the spec sheet as it currently stands. The five-door four-seater will be capable of up to 100mph (160km/h) top speed and can cover 40mi (64km) of the EPA's city cycle on electric power alone, earning it the name Extended-Range Electric Vehicle in GM parlance. To get that range it uses a 16kWh lithium-ion battery pack in the form of a 'T', plus a 150hp (111kW) electric motor that delivers 273lb-ft (370Nm) of torque at all speeds.

Charging the battery is accomplished by plugging it into either a 120v or 240v wall outlet. The more potent 240v outlet can charge the car in just three hours, while the more common 120v outlet will take eight hours to fully charge the system. At ten cents ($0.10) per kWh, GM figures that's 80 cents per day for 40mi of all-electric driving. That estimated cost of about two cents per mile compares favorably to 12 cents per mile using gasoline priced at $3.60 per gallon.

The design of the production Volt has evolved from the original concept that was unveiled at the 2007 Detroit Auto Show. Gone is the wide hulking stance and chiseled looks of the concept, replaced by a much sleeker and more conventional sedan body. Underpinning the body is a combination of McPherson independent strut front suspension, a compound crank twist axle rear suspension, four-wheel disc brakes, full regenerative brakes to maximize energy capture, and electric power-assist steering.

Because fuel-economy was one of the major constraints for designers, aerodynamics has played a key role in the car’s final look. The Volt's rounded and flush front fascia, tapered corners and grille are functional, enabling air to move easily around the car. In the rear, sharp edges and a carefully designed spoiler allow the air to flow off and away quickly. An aggressive rake on the windshield and back glass help reduce turbulence and drag. Its dimensions, however, aren't tiny. A 105.7in (2,685mm) wheelbase and 70.8in (1,798mm) width offer mid-size sedan cargo space of 10.6 cu. ft. (301L) while the 177in (4,404mm) overall length reflects the car's short overhangs and the relatively low 56.3in (1,430mm) overall height helps it squeeze through the air.

This design was essential in meeting GM’s original goal of having an electric-only driving range of 40 miles. This means that Volt owners who drive less than 40 miles on a daily basis will have no need to ever purchase fuel again. That amounts to a savings of about 500 gallons of fuel for a commuter that stays within the Volt's 40mi electric-only range each day. At an average price of $3.60/gallon, that's a yearly savings of $1,800. Commuters with a 60mi (96km) radius could save up to 550 gallons, or $1,980 per year.

The Volt is expected to be built at GM's Detroit-Hamtramck manufacturing facility, subject to officials successfully negotiating satisfactory government incentives. Production is scheduled to begin late 2010 for models in the United States.