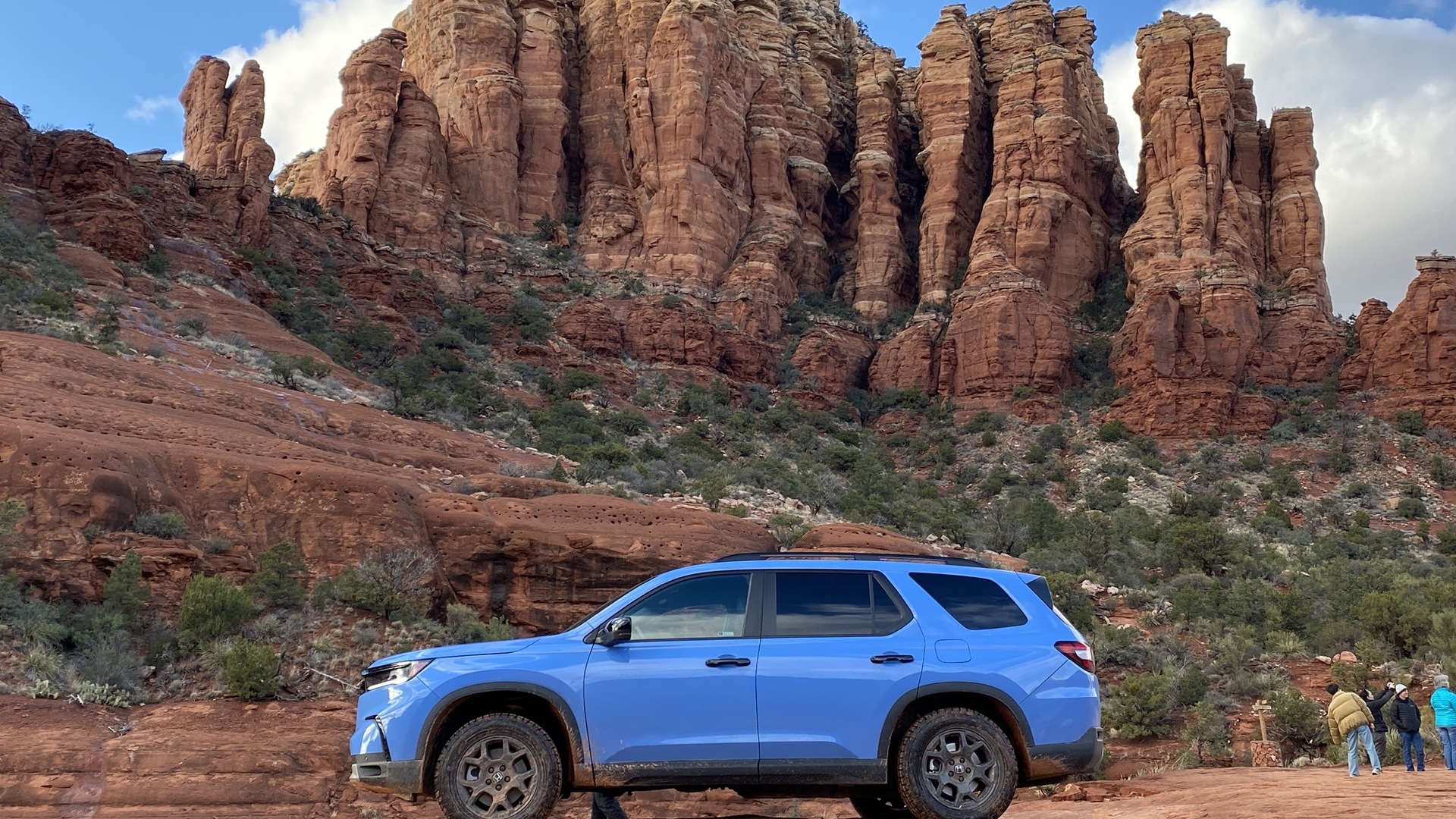 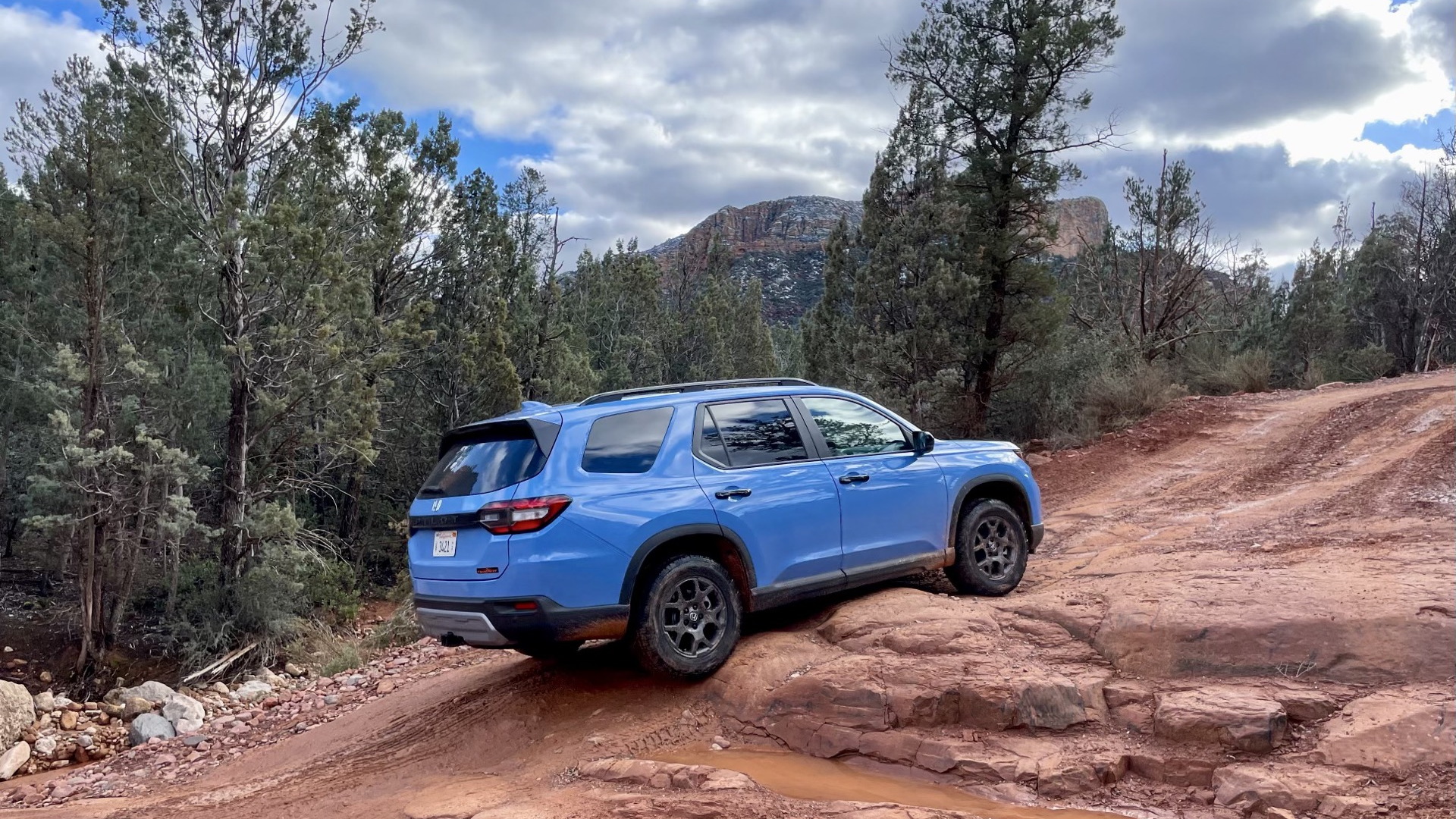 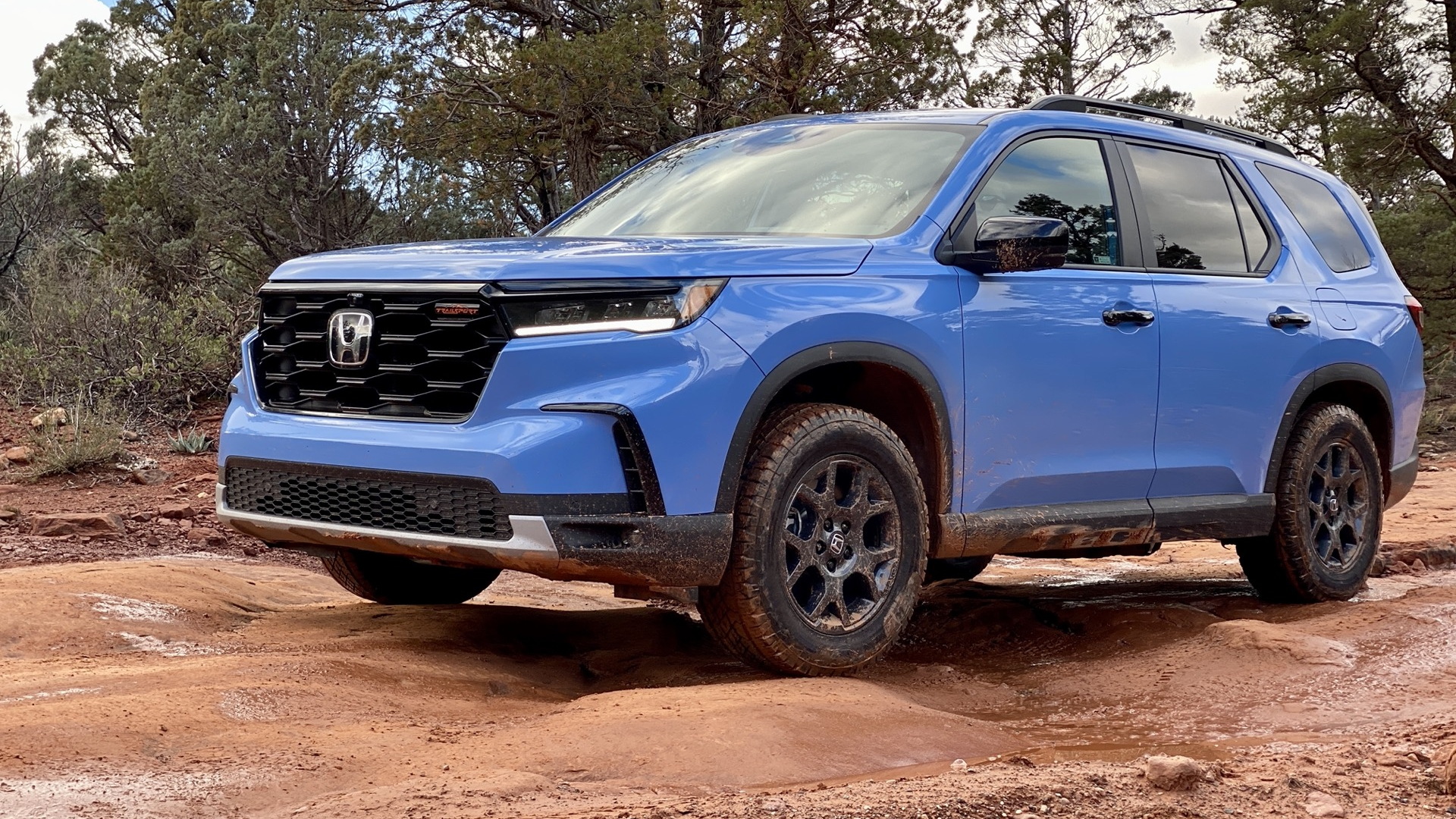 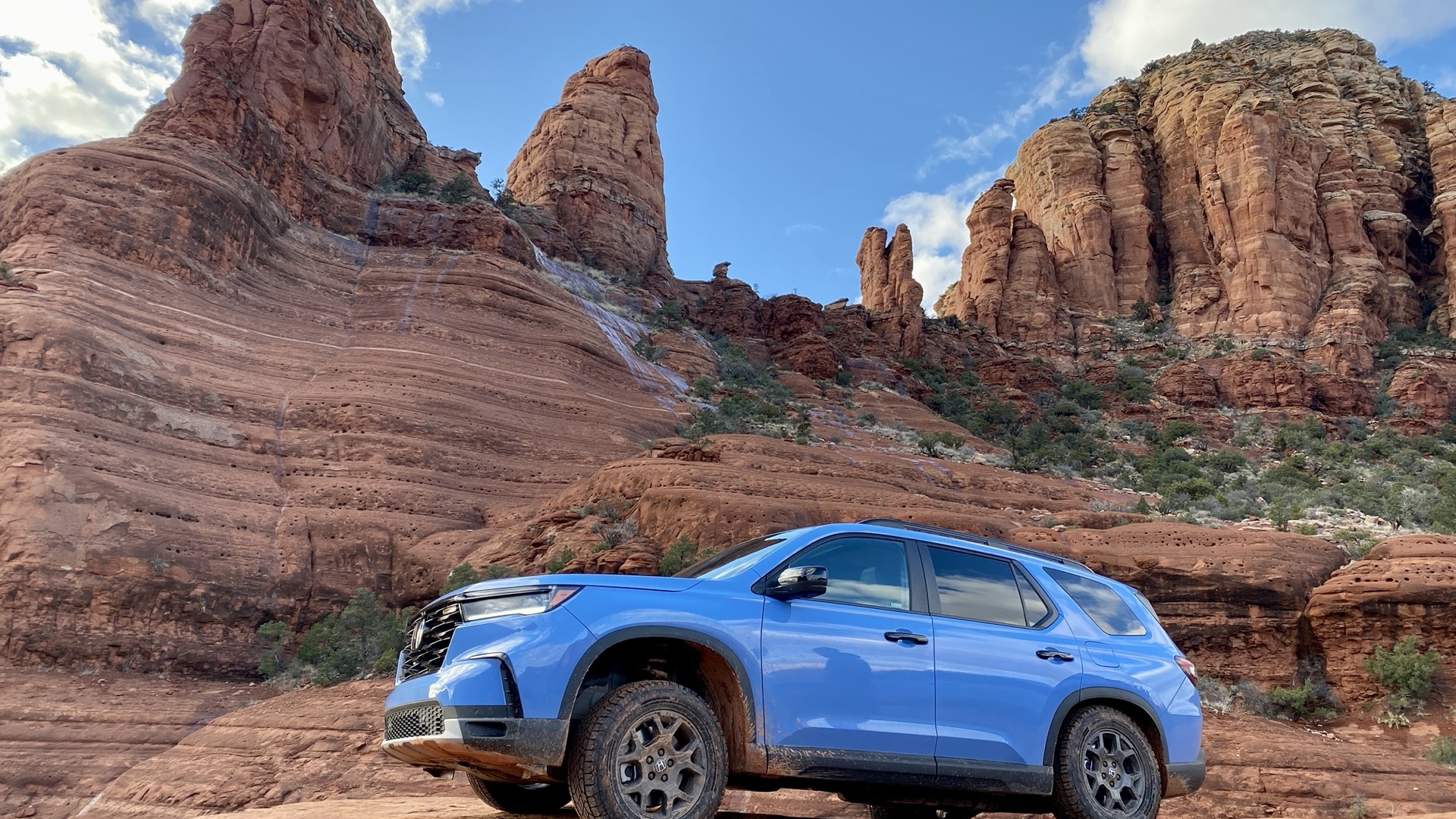 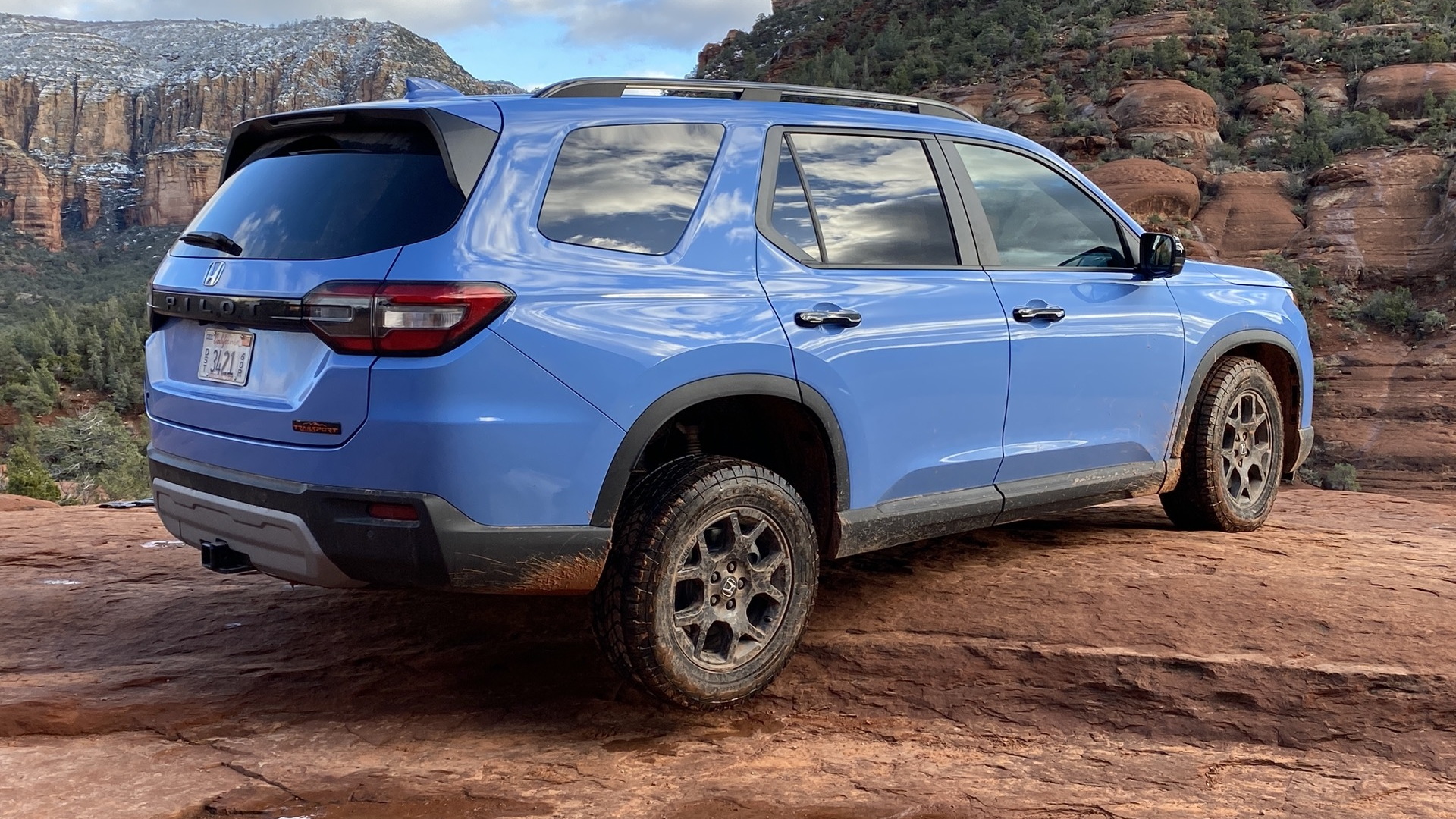 It might be hard to believe that the 2023 Honda Pilot TrailSport followed the path of Jeep Wranglers on the snow-slicked rocks and mud-rutted trail outside of Sedona, Arizona, this January. To be fair, the Wranglers were painted pink and upfitted with an open rear that could fit eight tourists under a Safari-style canopy. Though far from Jeep Jamboree-type material, the Pilot TrailSport was more capable than the tourists’ crossover SUVs left behind in the parking lot.

More importantly, the redesigned eight-seat crossover SUV with the off-road equipment proved its mettle against rival soft roaders such as the Ford Explorer Timberline and Kia Telluride X-Pro (and even the Honda Passport Trailsport) that boast rugged marketing more than off-road capability.

Honda says the new 2023 Pilot TrailSport is capable of handling off-road terrain considered easy or moderate that makes up 52% of U.S. public land. It’s not something to scale the slick rock of Moab or trek down and up a gorge, but it exceeded expectations in the scrabbly semi-desert sandstone of Sedona.

The longest and largest Pilot gets a bit longer as the TrailSport, and it rides an inch higher than other Pilots with a ground clearance of 8.3 inches. The approach angle increases, and a 4.0-mm-thick high-strength steel front skid plate protects the new 285-hp 3.5-liter V-6 and new 10-speed transmission powering the fourth generation Pilot.

Torque remains the same at 262 lb-ft, but the new powertrain reduces carbon emissions by at least 40%, though it has an EPA rating of 1 mpg less than its predecessor. Still, with standard all-wheel drive, the Pilot TrailSport drives quietly and smoothly on pavement, even with Continental Terrain Contact all-terrain tires (265/60 R18) wrapped around 18-inch wheels.

The engine feels familiar, but the 10-speed flicks through gears so quickly as to be unnoticeable. It can downshift four gears at once for quicker passing response, and standard paddle shifters give the driver some control. In Sport mode, it can be a little jumpy on downshifts, but otherwise it’s far smoother than competitors’ 9- and 10-speeds that can dance around in search of a partner. It helps to keep the engine and cabin quiet, except in Sport mode, when Honda amplifies some engine noise through the speakers. It sounds pretty good, too.

Flicking through the drive modes—Normal, Econ, Snow, Tow, and Sport—adjusts throttle response, shift timing, and steering weight to give the family hauler a bit more personality for the conditions, and AWD models add Trail and Sand modes. With the 18-inch tires, there wasn’t that much difference overall ride quality in the TrailSport versus the Pilot Elite and its 20-inch wheels.

Sharing the brand’s new global light truck platform with the Acura MDX, the 2023 Pilot is up to 60% stiffer than its predecessor. Revised MacPherson front struts as well as a stiffer multilink rear suspension give it a more planted feel on the road with less lean than its predecessor.

Trail mode was welcome off the pavement in the TrailSport. The tall lower gears that can cause a bit of sluggishness from a stoplight help out at low speeds while crawling up a staircase of snow-dusted rock. On such ascents, a light press on the throttle kept it moving forward without lurching ahead but once off the throttle it didn’t rock back either. The tires helped, and the Trailsport remained steady.

A more advanced all-wheel-drive system also helped move the TrailSport along in and out of ruts and through mud puddles. Similar to Acura’s Super Handling All-Wheel Drive, the Pilot’s variable torque management system can send up to 70% of the torque to the rear wheels. A torque-vectoring rear differential then can direct up to 100% of that torque to the rear wheel with the most grip. Even in cases in which drivers appeared to pause and tilt toward a desert bush, the system used the grounded wheel until the other one settled fully back down to pull forward without a problem.

Another skid plate protects the fuel tank, but the standard full-size spare and the hitch on the TrailSport cut into the departure angle and could lead to a scrape coming out of a rocky rut. Both the hitch and the front skid plate have recovery points that are rated to haul out double the gross vehicle weight of the Trailsport. The curb weight is 4,650 pounds, and it’s rated to tow 5,000 pounds.

Modified stabilizer bars help with wheel articulation, but the Pilot TrailSport lacks the shocks and genuine off-road bits to expand wheel travel to the level of rock crawler. Still, it shouldn’t have a problem going beyond access roads through the woods into hunting or farm land.

Honda also adds standard hill descent control. On grades of seven degrees or greater it maintains throttle and braking control between 2-12 mph. I tested it, but I doubt many Pilot TrailSport drivers will descend such steep grades  for such sustained periods as to need it, but if they do Honda also provides a spotter.  A surround-view camera system engaged in Trail mode or via the wiper stalk provides eyes at the front, overhead, and from the side mirrors, helping the big Pilot navigate corners and detect dropoffs.

The TrailSport gave me more confidence than I expected, and Honda let it prove itself on a course shared with Wranglers laden with tourists. The Pilot TrailSport seats seven passengers, too, and its panoramic sunroof acts like a protected safari canopy, but it can also take the family cross country in quiet and calm. The $49,695 Pilot TrailSport has unexpected off-road capability that adds an adventurous spirit to a sensible family hauler.

Honda paid for airfare and lodging for Motor Authority to bring you this firsthand report.