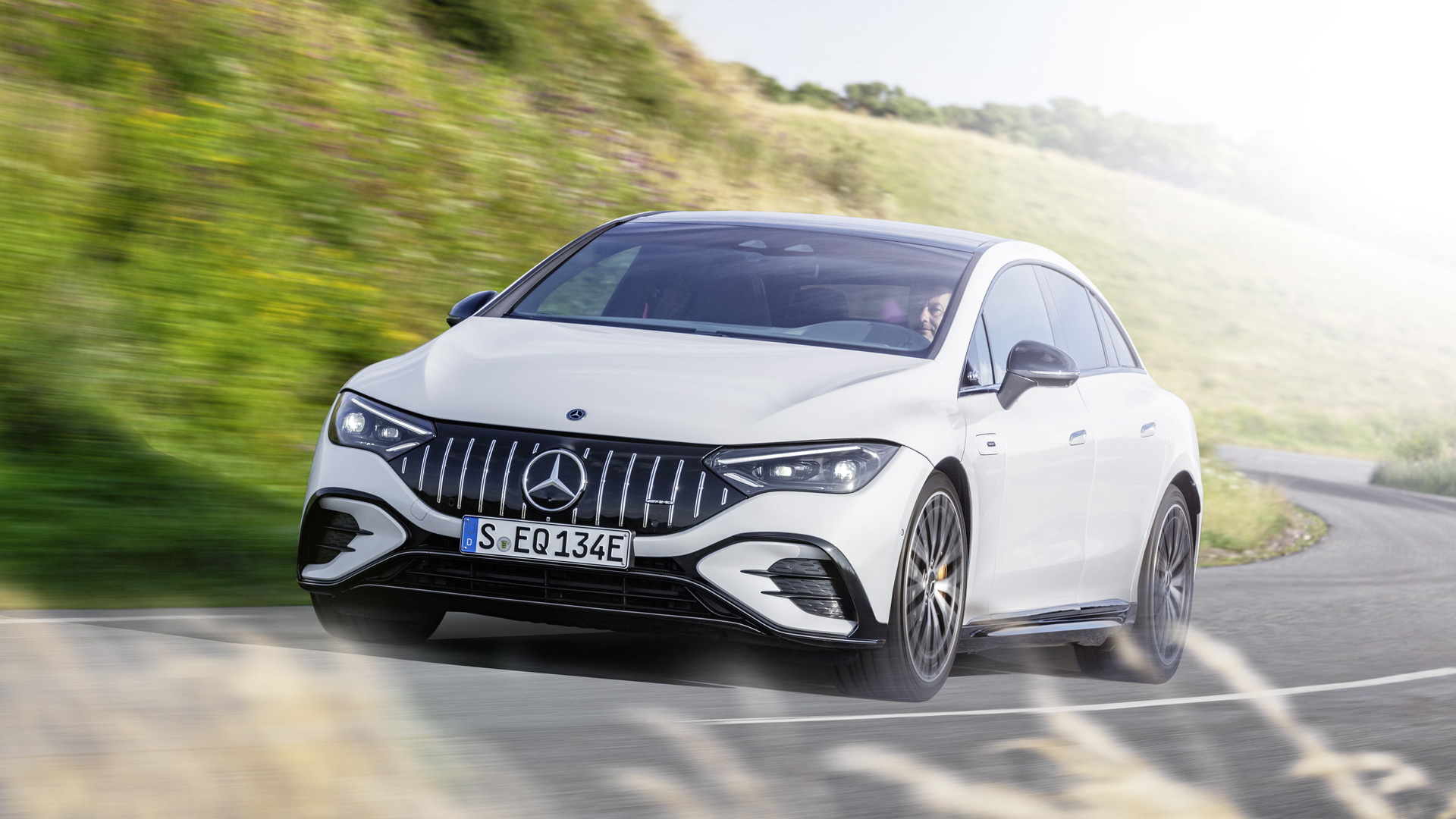 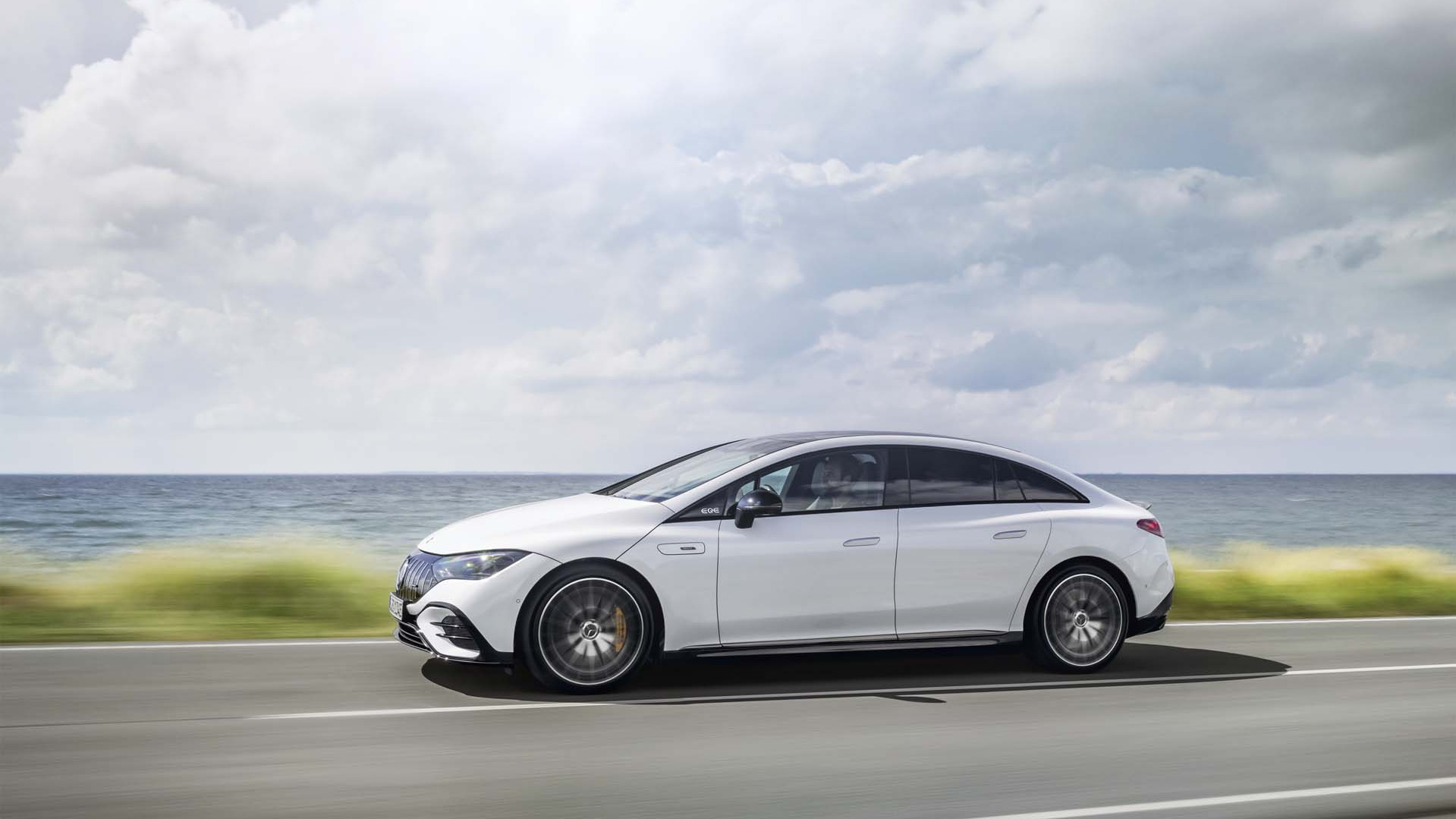 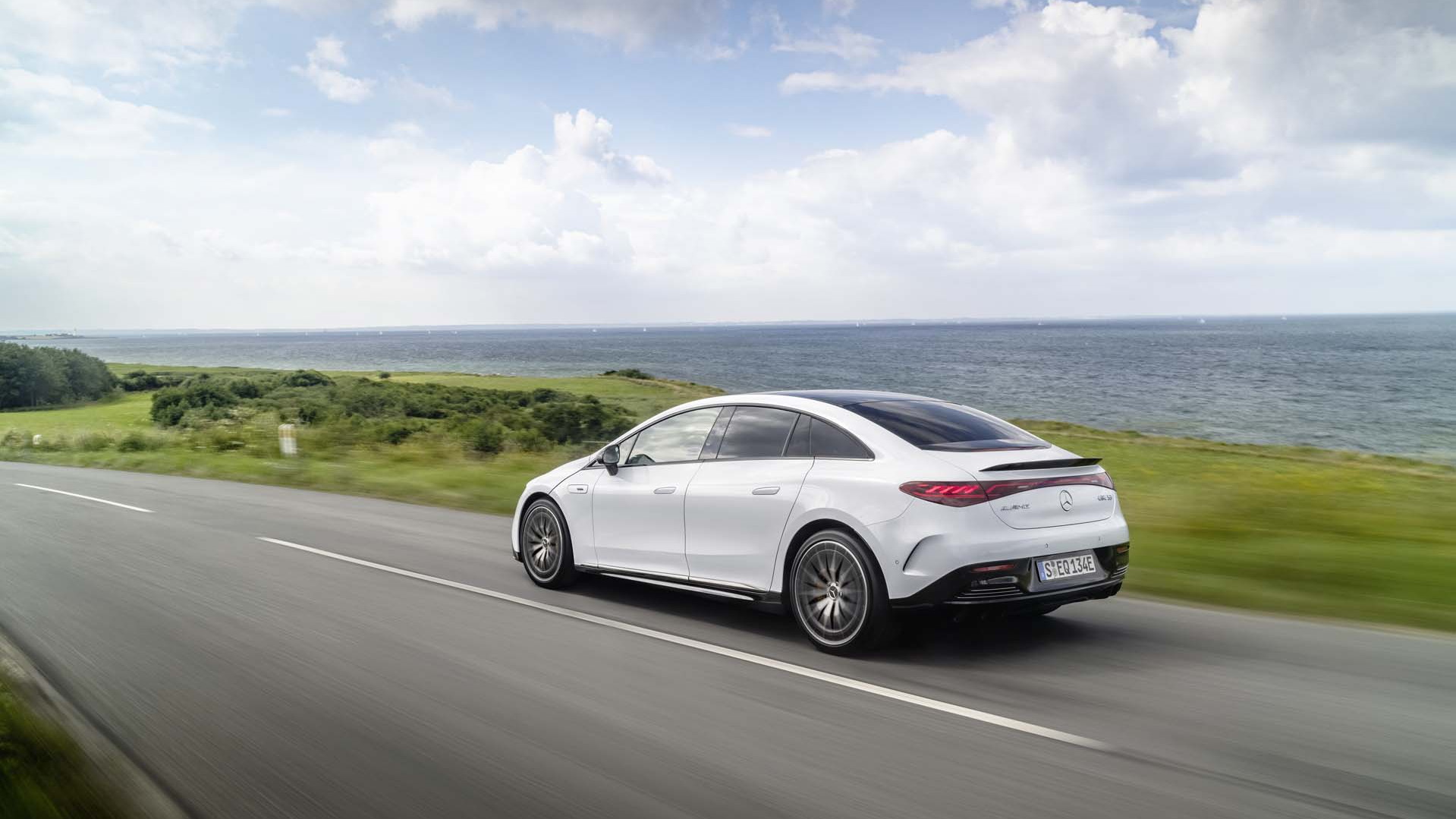 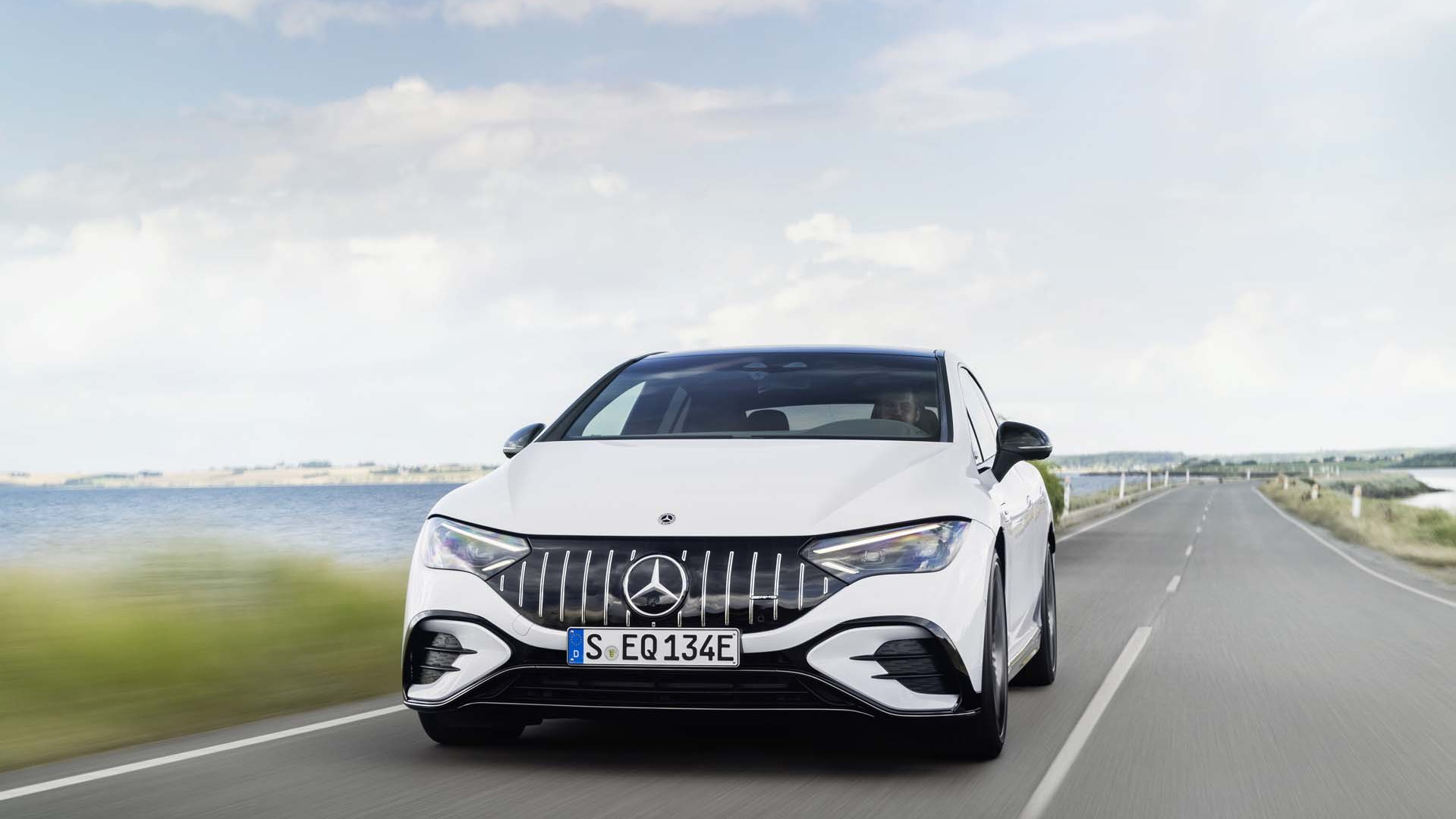 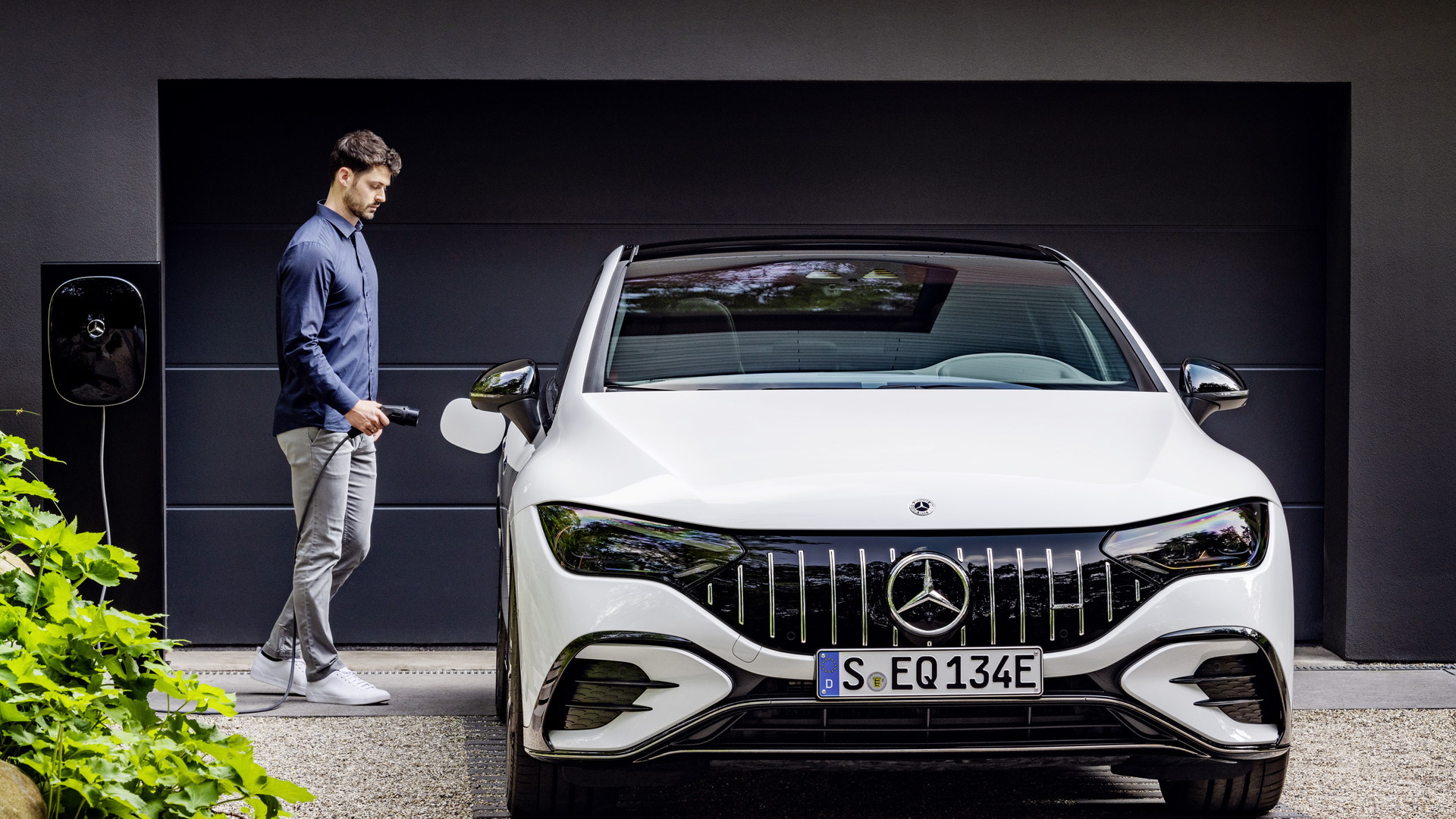 Mercedes-Benz AMG isn't taking its sweet time with the launch of its first dedicated electric vehicles.

After launching a hardcore version of the Mercedes-Benz EQS electric hatchback for 2022, the Affalterbach tuner has now revealed its take on the smaller EQE electric sedan. The EQE is due out in the spring as a 2023 model, and we'll see this AMG version early next year, also as a 2023 model.

AMG's version of the EQE will arrive in just the one grade, wearing a 53 badge. The powertrain is a dual-motor setup delivering a peak 617 hp and 701 lb-ft of torque in standard guise and 677 hp and 738 lb-ft with an available Dynamic Plus Package. Outside the U.S., a tamer model sporting a 43 badge is also planned. This one has a combined output of 469 hp and 643 lb-ft.

The standard setup is estimated to deliver 0-60 mph acceleration in 3.4 seconds and a top speed of 137 mph, and the plus version should deliver corresponding figures of 3.2 seconds and 149 mph. In both cases there's a 90.6-kilowatt-hour battery that's estimated to deliver more than 250 miles of range with mixed driving. A final EPA-rated figure won't be announced until closer to the market launch.

The platform of the EQE, as well as this AMG EQE, is the EVA dedicated EV platform that debuted in the EQS. The platform has been equipped as standard with all-wheel steering for the AMG EQE, and the possibility to charge at rates of up to 170 kilowatts means close to 100 miles of range can be added in around 15 minutes. Regenerative braking is also featured, with the driver able to adjust the severity. In some settings one-pedal driving is possible.

Specific AMG elements in the platform include the tuning of the all-wheel-drive system and suspension, as well as the motors themselves. The motors are permanently excited synchronous motors with specific windings, laminations, inverters and current ratings. According to AMG, the specific combination enables higher revs and power than conventional motor designs.

When it comes to the exterior design, the AMG cues will likely be recognized by true fans only. There's the typical AMG front fascia with an A-wing design, as well as a large wheel and tire combo. Carbon-ceramic brake rotors are available as an alternative to the standard steel brakes, though only together with the available 21-inch wheels.

Inside, the EQE borrows liberally from the EQS, and this is true for the AMG versions. A standard 12.3-inch digital gauge cluster is augmented by a 12.3-inch infotainment screen, but Mercedes' 56-inch Hyperscreen is available. It consists of three screens that are housed beneath a single panel and cover pretty much most of the dash. AMG touches include the steering wheel, drive mode selector, pedals, door sills, and floor mats.

Pricing information for the AMG EQE will be announced closer to the next year's market launch.

AMG has plenty of experience with electric power. Recall, the tuner first tested the waters in 2014 with the SLS AMG Electric Drive. It was the fastest, most powerful EV on the market at the time thanks to its 740-hp output. Since then, AMG has gathered more experience, particularly in the areas of energy discharging and recovery, from its Formula One program.

The Affalterbach tuner is also planning its own standalone EVs. These will be based on an AMG-specific platform dubbed AMG.EA, and the first should surface around 2025.