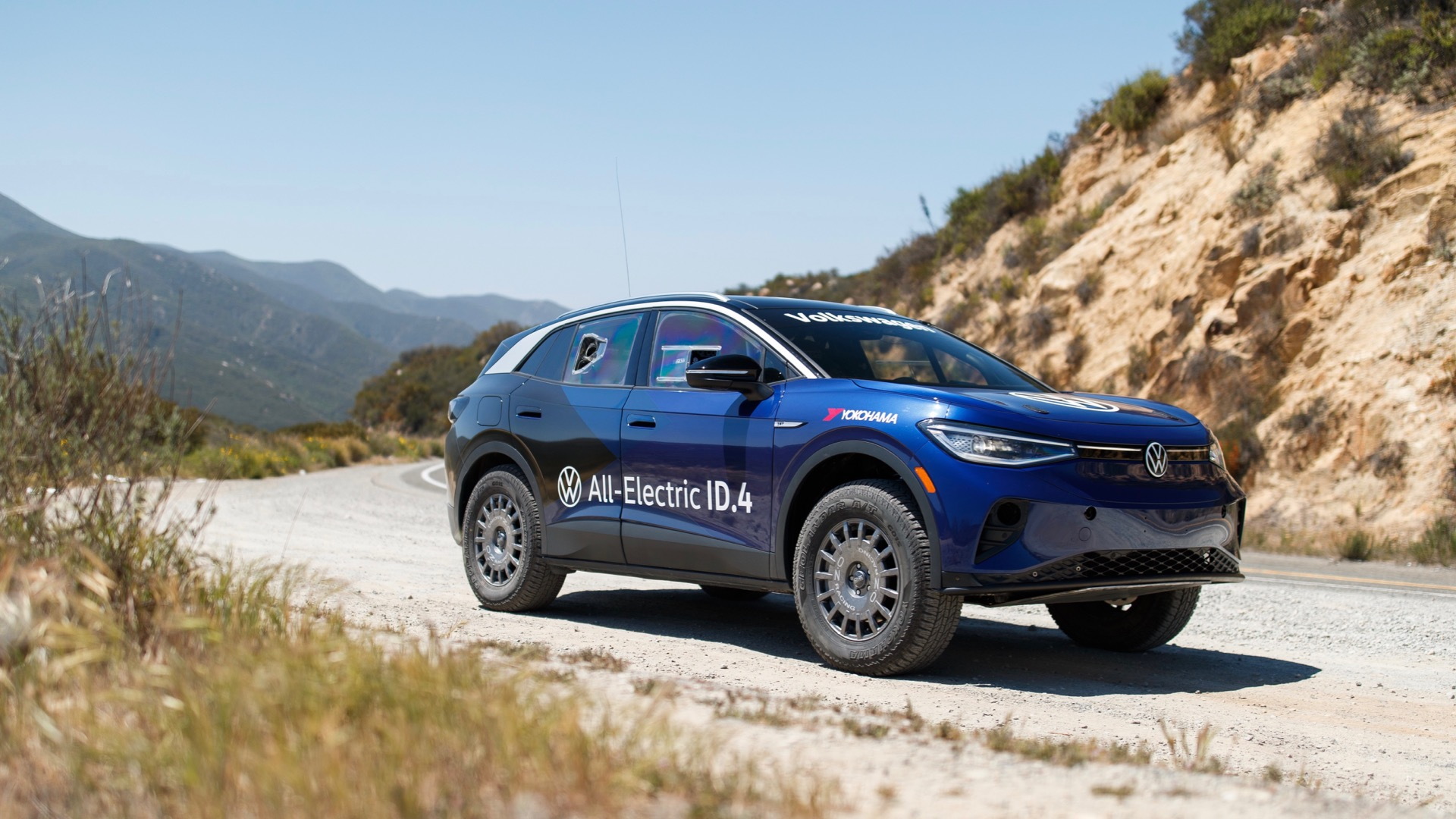 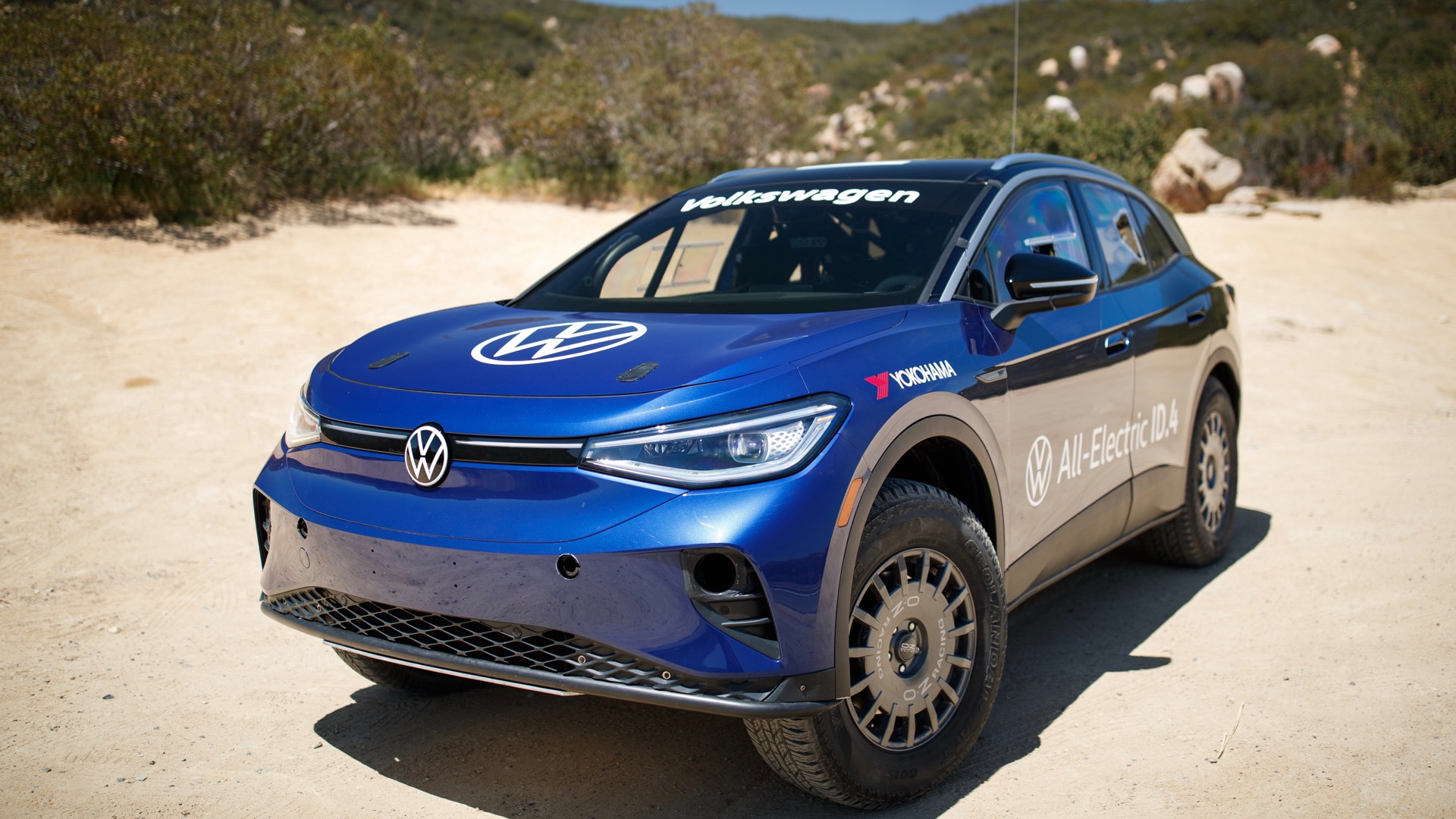 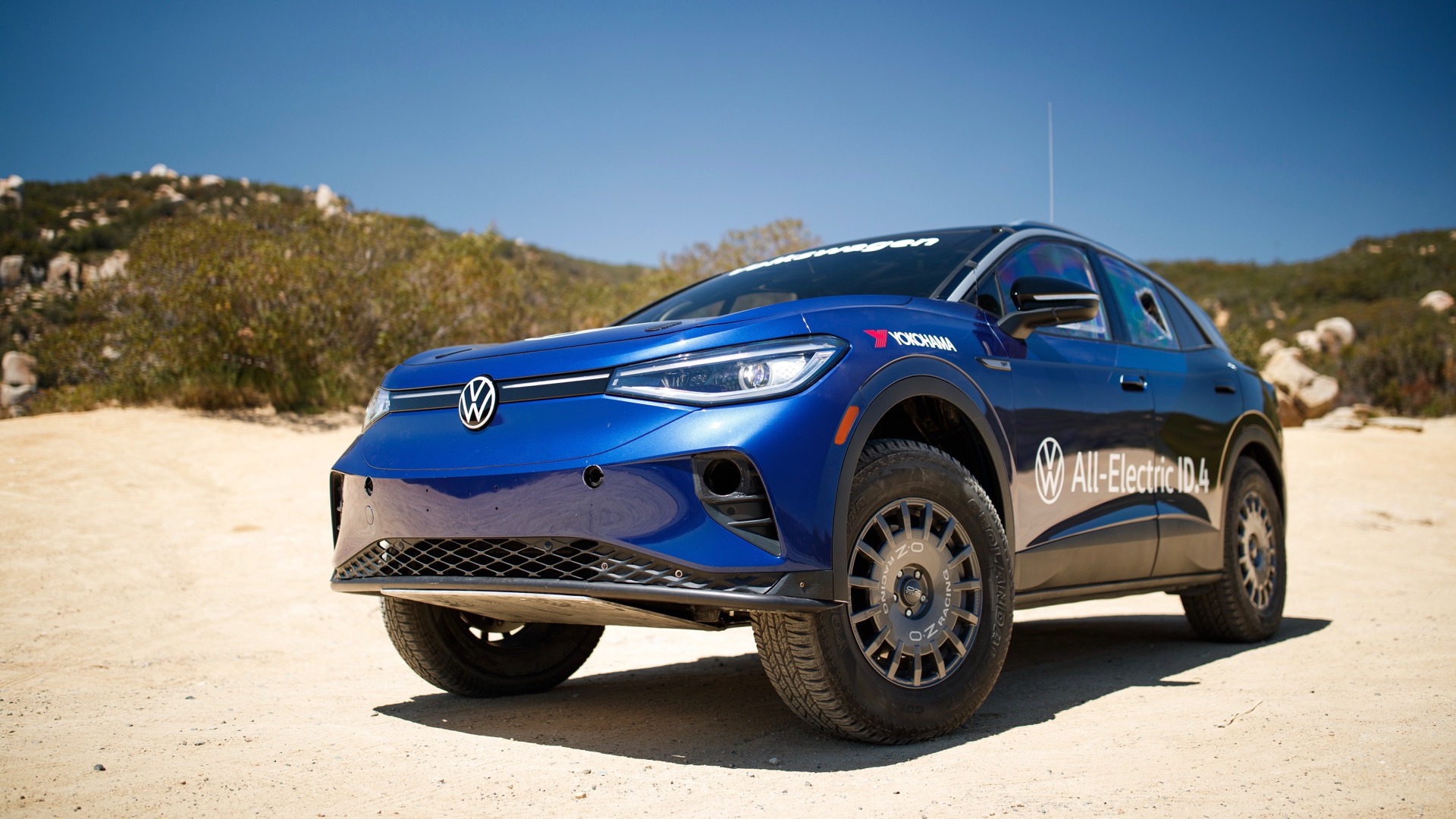 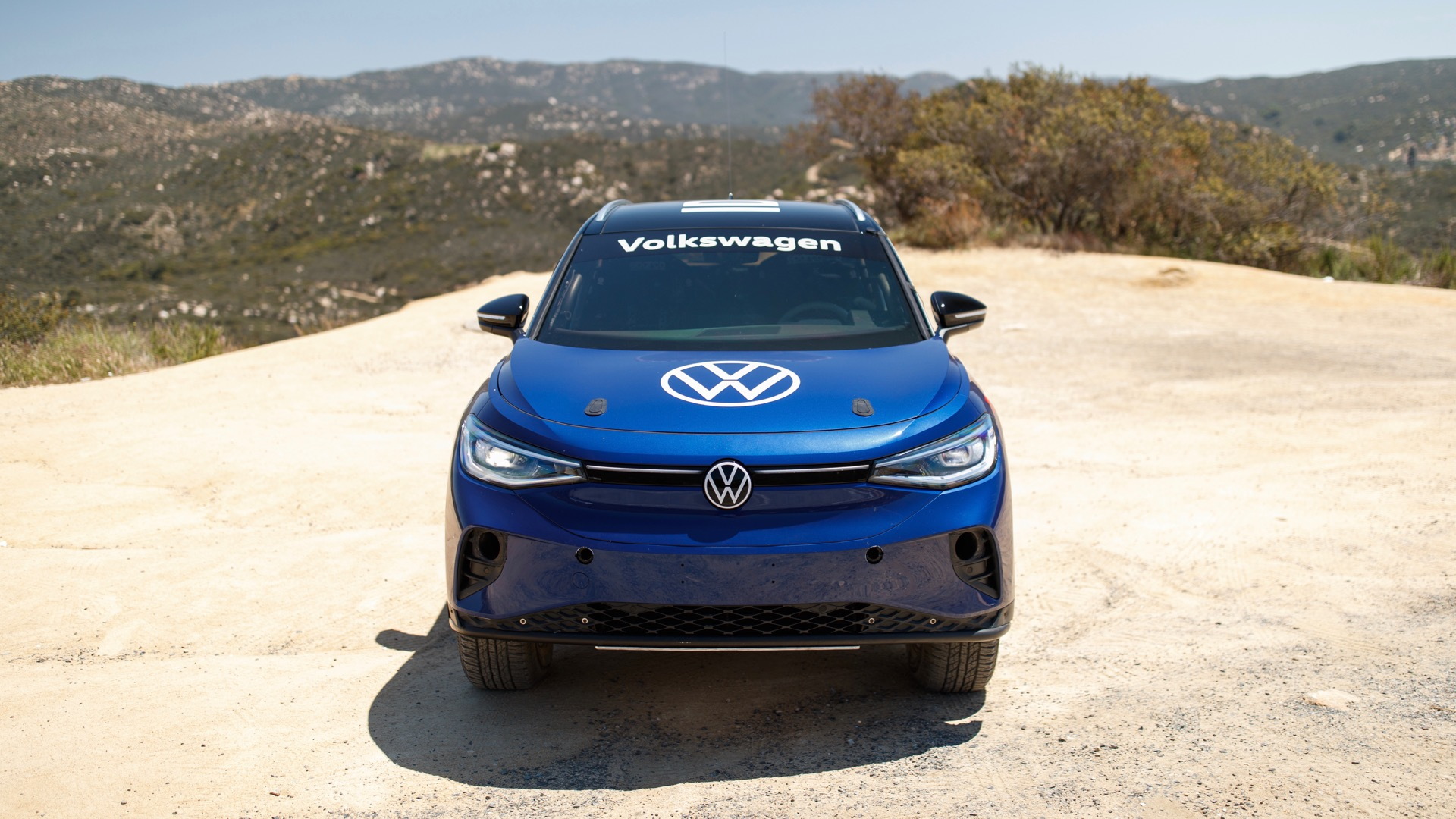 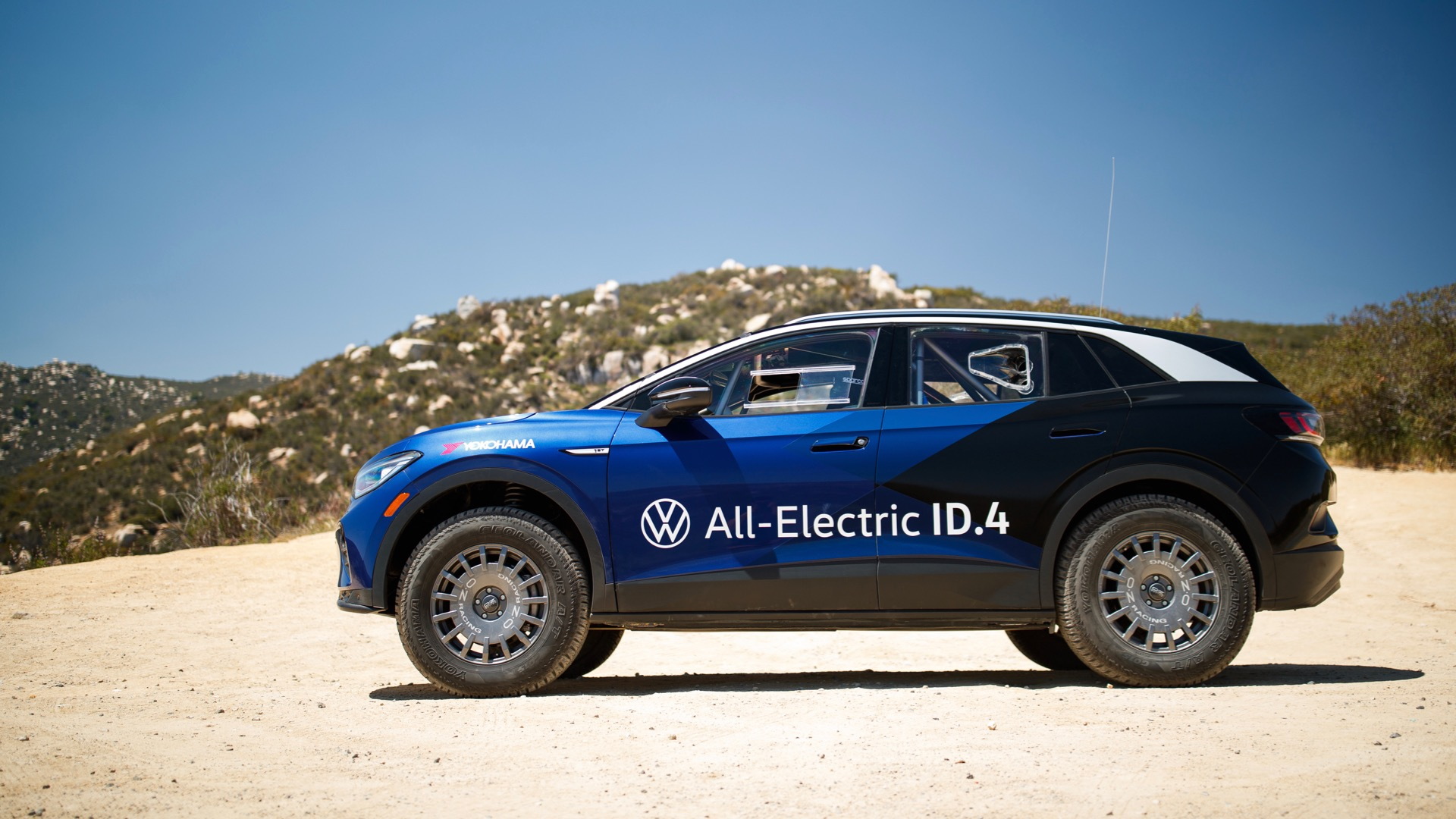 A modified Volkswagen ID.4 is racing in the NORRA Mexican 1000 this week. VW claims it's the first production-based EV to compete in the off-road race, which started April 25 and wraps up April 29.

VW sent a stock ID.4 First Edition to Rhys Millen Racing, which modified the suspension with rally-style coilovers, tubular lower control arms in front, and boxed lower links in the rear. The ride height was raised by 2.0 inches, skid plates were added, and the radiator was moved to improve approach angles and cooling capacity, a VW press release said. The stock 19-inch wheels were swapped for 18-inch rims, with Yokohama Geolander A/T 255/70R18 tires.

Typical for a racing conversion, the interior was stripped of all convenience features and fitted with a roll cage and racing seats. VW kept the 1st Edition's white steering wheel however, which will probably be different a color at the end of the race.

No powertrain modifications were made, so the ID.4 off-road racer still uses an 82-kwh battery pack, with a single 201-hp electric motor. That motor is mounted in the back of the vehicle and drives the rear wheels, not unlike the Beetles and Meyers Manx dune buggies that have been a fixture of off-road racing for decades. A Manx won the inaugural Mexican 1000 in 1967.

While the name suggests a 1,000-mile race, the 2021 NORRA Mexican 1000 is actually 1,141 miles long, with 893 miles off-road, according to VW. To charge the ID.4, the race team is using a portable 50-kw DC fast-charging station, powered by a biofuel generator. The race will also be run in loops, rather than point-to-point, due to coronavirus restrictions, and the team will attempt to complete about 98% of the stages in each loop without charging, according to VW.