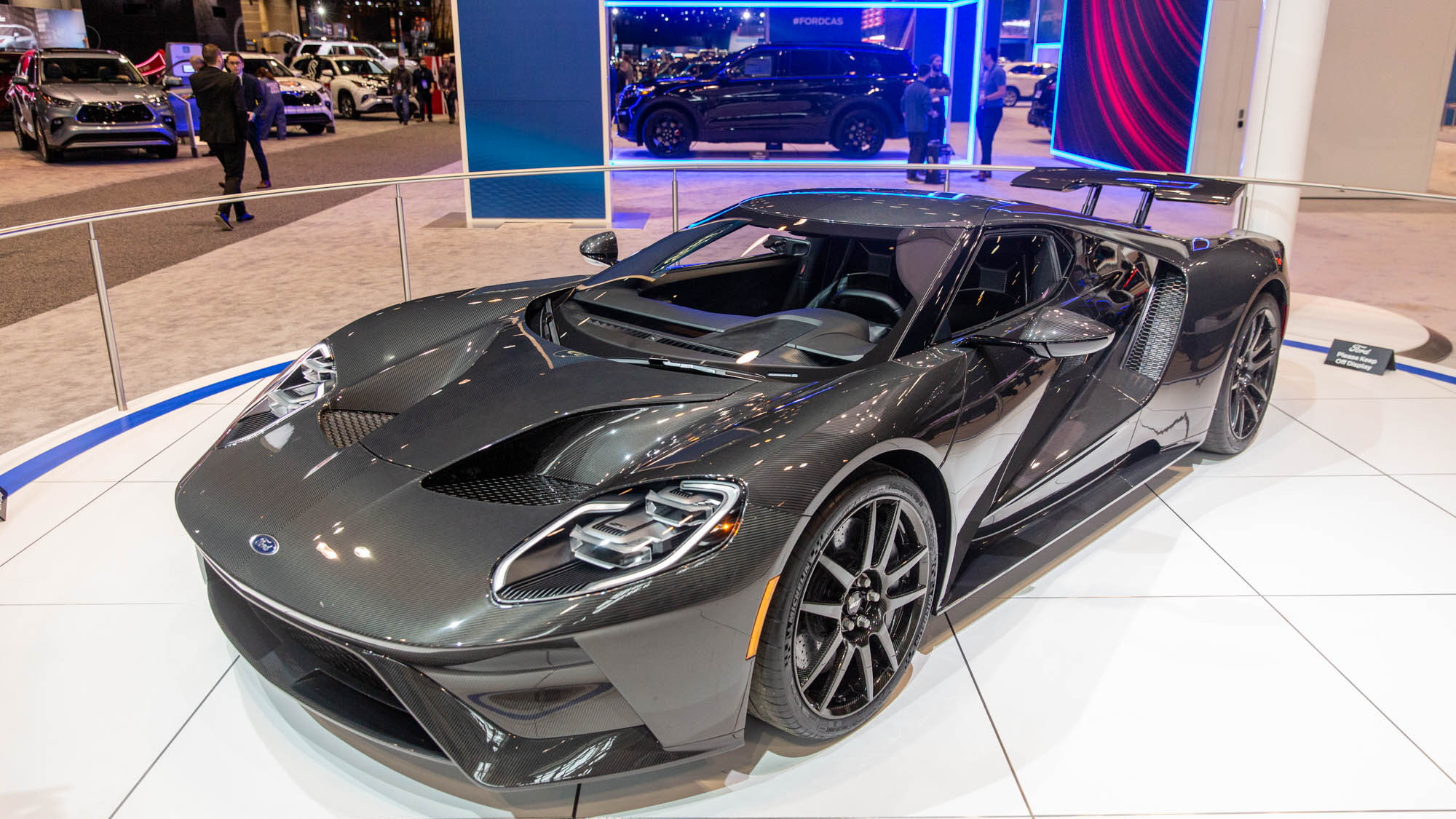 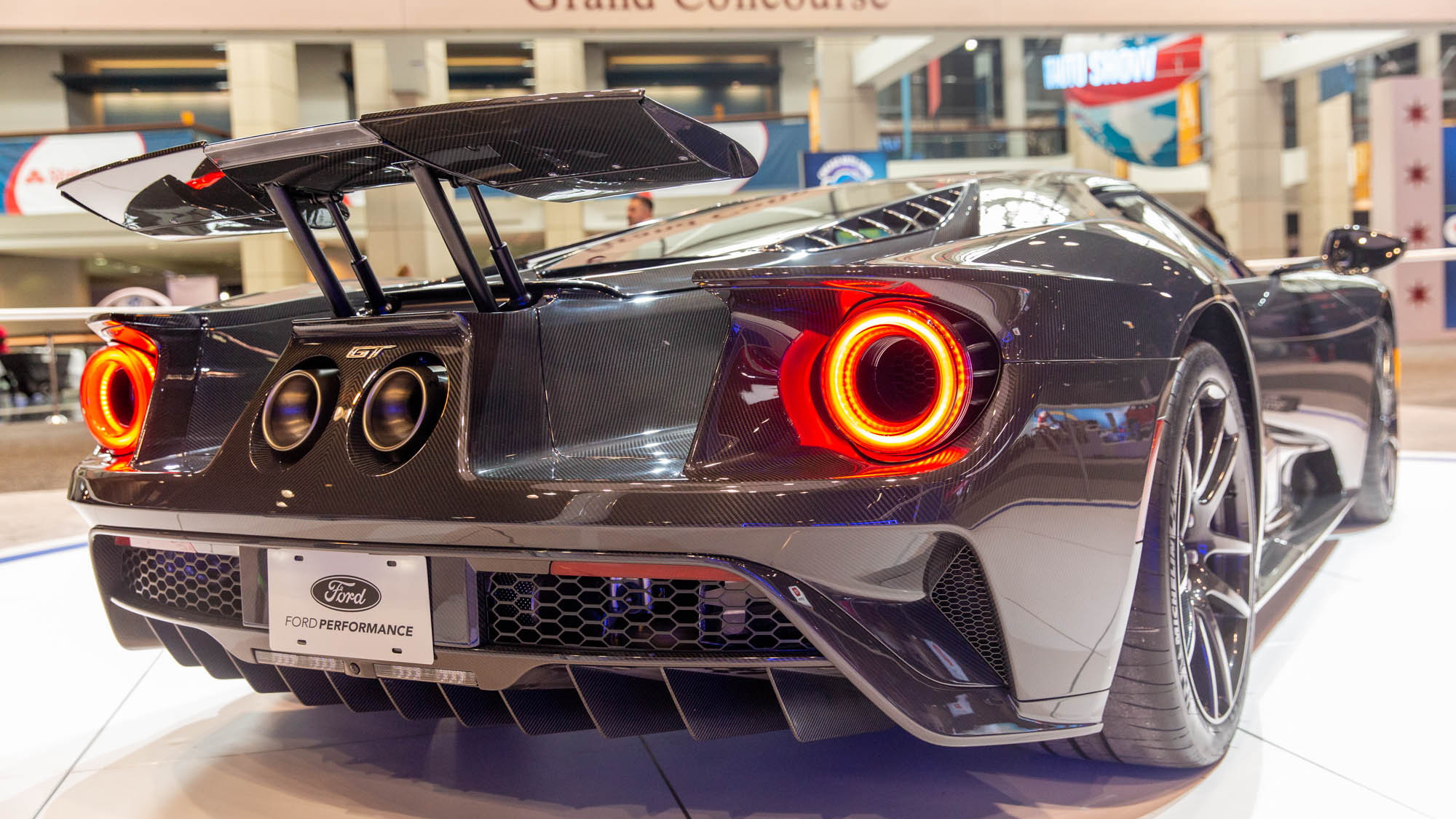 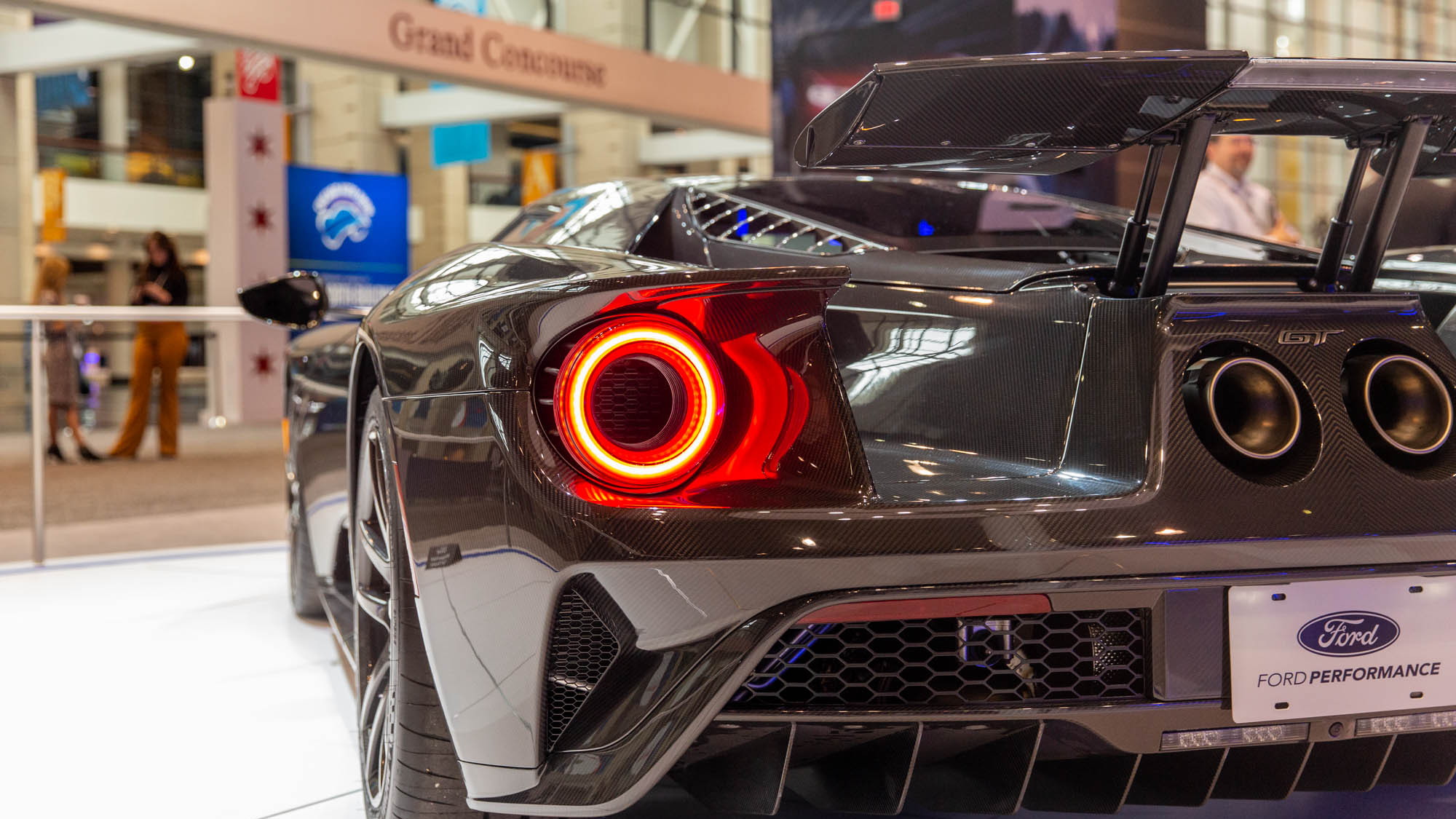 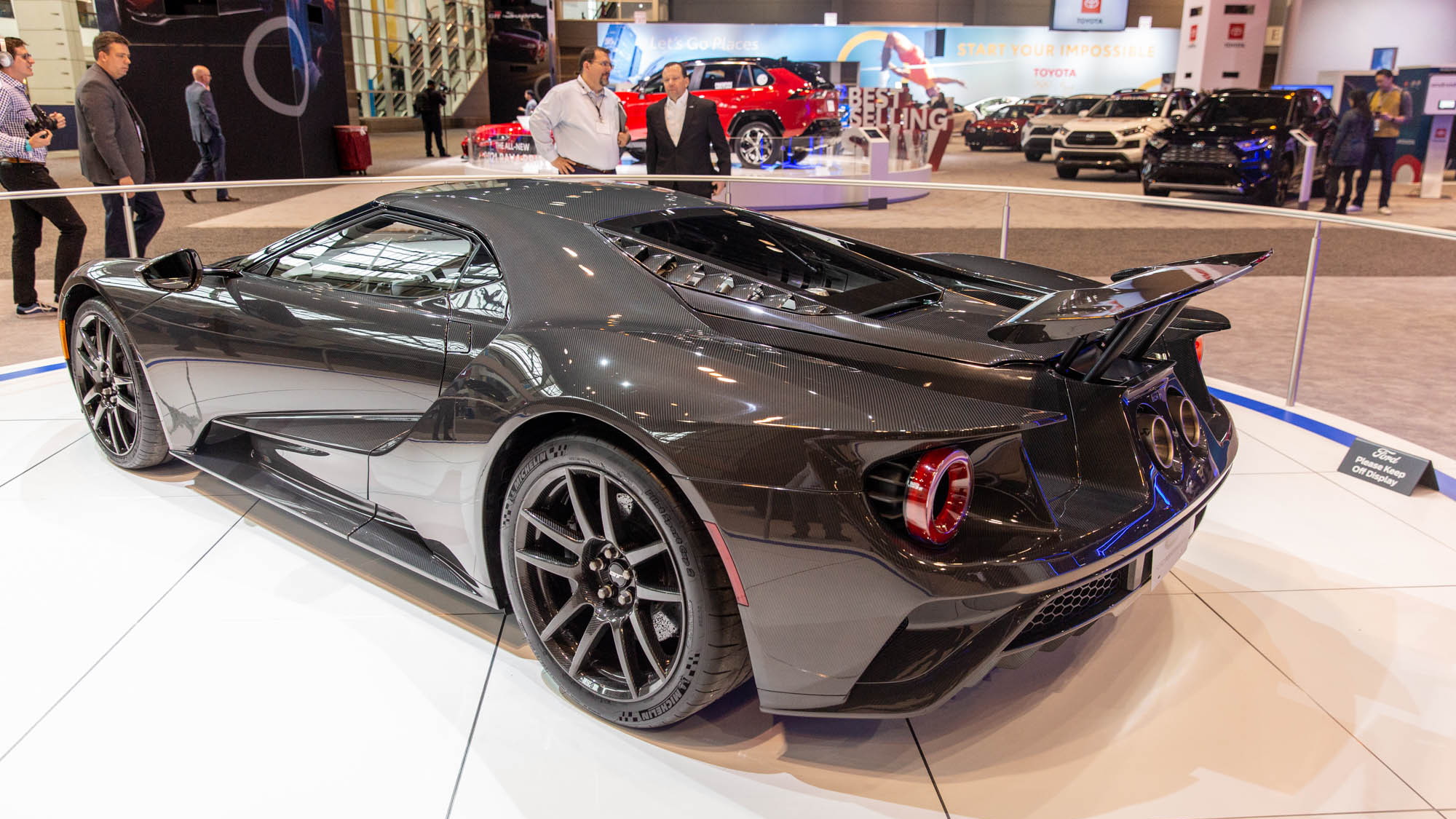 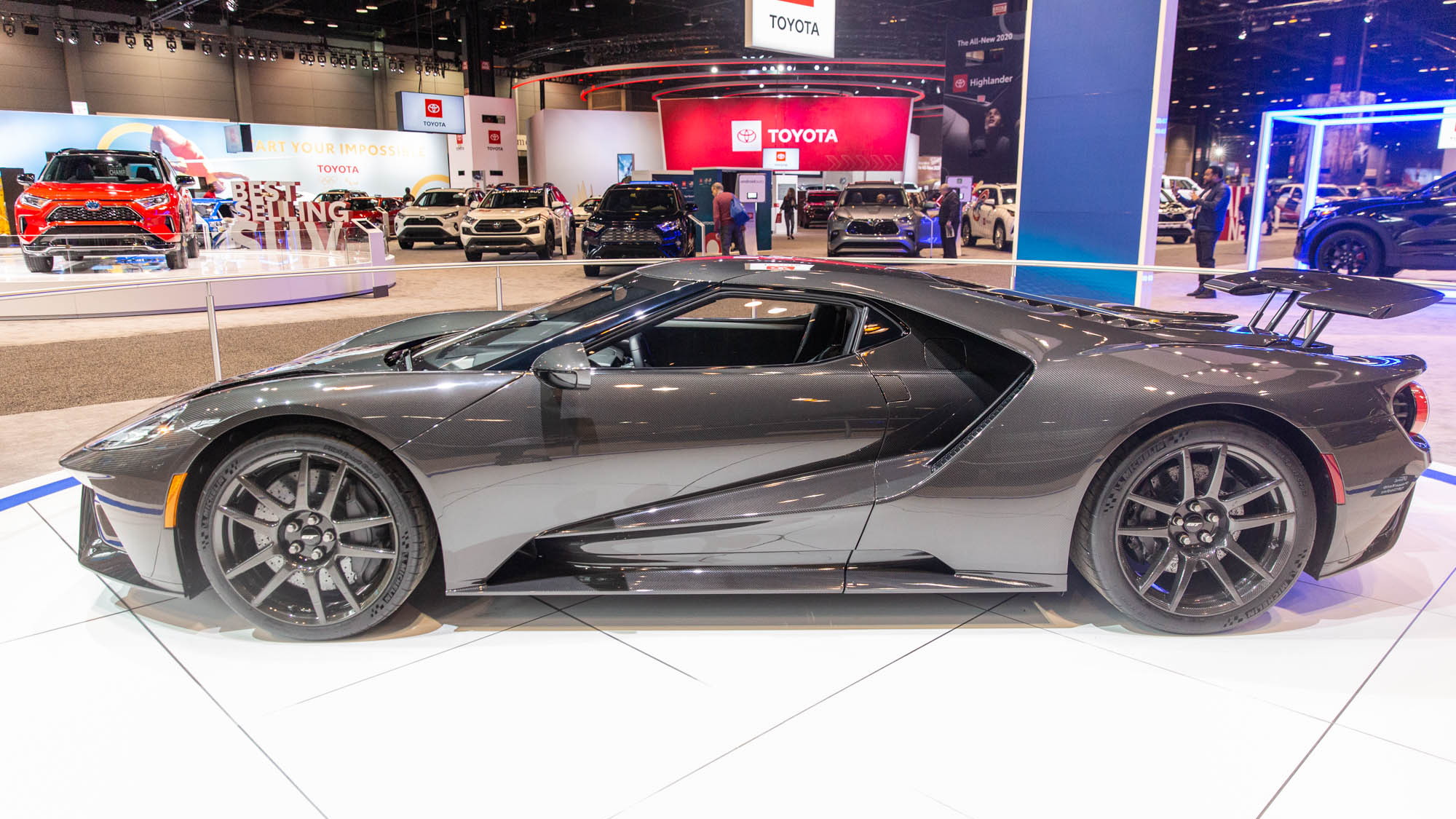 The Ford GT thrills with its wild looks, race car design, and twin-turbo 3.5-liter V-6. For 2020, it's even more thrilling thanks to more power, a new Liquid Carbon limited-edition variant, and tweaks to its already track-ready handling. The 2020 Ford GT supercar made its official debut Thursday at the Chicago Auto Show.

Engine upgrades boost its horsepower from 647 to 660 this year and give the V-6 a broader torque curve. The engine calibration is changed, and the engine now uses gallery-cooled pistons and higher-energy ignition coils. Ford says these tweaks came from knowledge gleaned form the limited-edition, track-only GT Mk II.

In addition to extra power, the engine is better cooled in 2020 with new buttress air ducts that bring in 50 percent more air and larger intercoolers that reduce charge air temperatures. And increased damping in Track mode should improve handling with better body control, especially in quick changes of direction.

One of the GT's biggest issues could also be improved this year thanks to a new, standard Akrapovič titanium exhaust system. The V-6 isn't as sonorous as the V-8s, V-10s, and V-12s of rivals. The Akrapovič exhaust shaves 9 pounds off the car and is sure to create a meaner sound.

For 2020, Ford is also adding a new limited-edition appearance option and tweaking the look of another.

The new Liquid Carbon edition shows off the carbon-fiber body by foregoing paint and using only a clearcoat. All of the carbon-fiber is taken from the same batch so its weave matches panel to panel. This increases the time required to hand-build the car.

Liquid Carbon buyers can add either the dual center over-the-top stripes from the standard GT or the single over-the-top stripe from the Carbon Series variant. Buyers can also choose painted mirror caps from the seven standard paint colors or the expanded color palette. This is the first time the stripes and painted mirror caps can be ordered independently.

Ford spokesman Matt Leaver told Motor Authority the Liquid Carbon GT is a limited-edition and about 12 will be built a year.

Finally, Ford is fixing the look of its Gulf Racing Heritage Livery for the Heritage Edition variant, which adds $115,000 to the price. A black pinstripe is added between the iconic blue and orange colors and its optional carbon-fiber number is now 6 instead of 9. The same car, chassis No. 1075, won the 24 Hours of Le Mans in both 1968 and 1969. It wore the No. 9 the first year and the No. 6 the next year. The Gulf livery car can also now be ordered with the carbon-fiber wheels.

For more news from Chicago, check out our dedicated hub.

This story has been updated with pricing information on the Liquid Carbon and Heritage Edition cars.