As electric cars expand across the automotive industry, it's no surprise they're taking on motorsports, too. In this case, one team is ready to drive an electric Chevy Camaro sideways in Formula Drift.

Napolean Motorsports has been hard at work on its electric Camaro, which it humorously calls the "EL1," a clear play on the production Camaro's 1LE performance package. The team's electric drift car will be the first of its kind in Formula D when it eventually competes. We say eventually because the Camaro EL1 was supposed to make its debut at last weekend's Formula D event in Long Beach, California. However, a city ordinance kept the car off of the street-based circuit.

According to Instagram account Formula Derp, the city ordinance prevents electric cars from racing against internal-combustion engine-powered cars on city streets. Why? We have no idea. While a closed circuit is fine, the Formula D event was held on a street circuit, which is city property. The local fire department was also supposedly not prepared to fight an electric car fire should something go wrong with the Camaro EL1. Indeed, the car did not make its scheduled debut last weekend as intended despite an online petition to make an exception for the electric drift car. 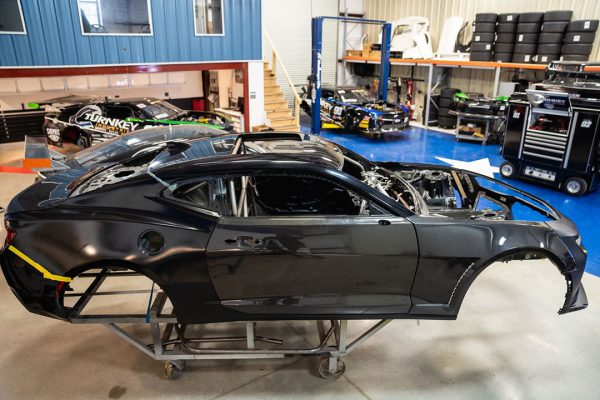 Thus, we'll have to wait for the Formula D event in Orlando on April 25 to see the car's competition debut.

As for the car itself, the rear body panels are carbon-kevlar while the front quarter panels, hood, and doors are carbon fiber, all courtesy of Anderson Composites. That means only the roof is the original steel. The car carries around 800 pounds of batteries, but weighs in at 3,000 pounds compared to about 3,300 pounds for a stock Camaro 1LE.

Like any drift car, it has a custom suspension. It rides on a coil-over suspension with billet-aluminum control arms and uprights.The 38.4-kwh battery pack sits where the engine would normally go. The motor lives in the back and makes 515 horsepower and 800 pound-feet of immediate torque, which is ideal for drifting. Even with all that weight up front, the weight balance is 51 percent front/49 percent rear.

It's not the first time we've seen the an electric Camaro tackle motorsports. Chevrolet debuted the eCOPO Camaro at the 2018 SEMA show, and the car has gone on to set some impressive 8-second quarter-mile times without a drop of gasoline.