Tesla laid a blueprint for electric car infrastructure with its Supercharger stations, but Porsche may be aiming to perfect it and spread the benefits with its own 320-kilowatt fast-charging stations.

The luxury and sports car brand installed its first prototype 350-kw, 800-volt station in Berlin, Germany, in August, and it has followed that unit up with the "Porsche Turbo Charging" technology at the Electric Vehicle Symposium in Stuttgart. To showcase Porsche Turbo Charging, it brought a special demo car: a battery-powered version of a Porsche Cayman.

Porsche calls it the Cayman e-volution, and it can reach 62 mph in just 3.3 seconds on pure battery power. Porsche says it is a research vehicle and it will not go into production. The Cayman e-volution can go 124 miles on a single charge before its battery pack empties.

When the battery pack is depleted, Porsche Turbo Charging promises incredibly quick charging times. The brand says the Porsche Turbo Charging station is its first ever accumulator-based fast-charging system and is capable of a charging capacity up to 320 kw per vehicle or twice 160 kw. Porsche calls it a medium-voltage connection (though it did not give a voltage figure) developed through a collaboration between Porsche and ADS-TEC. With these first details, this system appears to be different than the 350-kw station Porsche touted earlier this year, likely due to a lower voltage output.

The 350-kw charging station in Berlin will charge the forthcoming production version of the Mission E concept's battery pack to 80 percent in just 15 minutes. For some perspective, the 350-kw Porsche Turbo Charging station cuts a charge time in half when compared to current 50-kw charging stations. The system uses liquid-cooling technology to ensure the charging pins do not overheat while the station transfers high rates of electricity. Porsche says all makes that utilize the Combined Charging Standard (CCS) will benefit from the charging technology. All German automakers and all U.S. automakers—except Tesla—follow the CCS standard. Porsche Turbo Charging won't be quite as quick to charge, but it is still a form of fast charging. 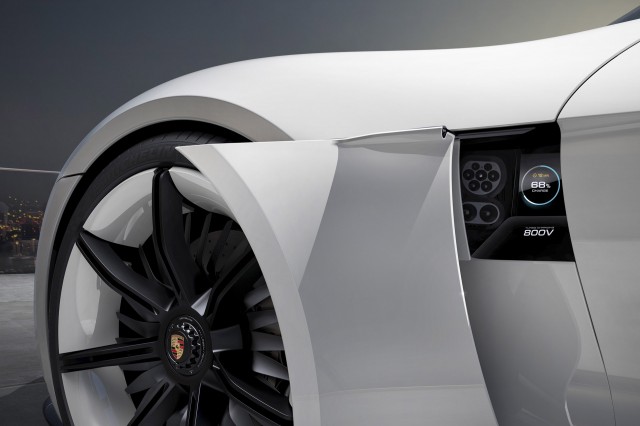 The production Porsche Mission E is the brand's most direct Tesla Model S rival, and it will likely boast a range of more than 300 miles when it debuts in 2019. If the Mission E concept car is anything to go by, we expect the production car to feature separate motors to drive the front and rear wheels with a combined output of 600 horsepower.

It's unclear when we'll see the 320-kw charging stations come online, but there are immediate plans for the Porsche Turbo Charging system. The brand announced one network will be built on major European traffic routes by 2020 in a joint venture with Porsche, Audi, BMW, Daimler, and Ford. Volkswagen Group has been ordered to invest $2 billion in the U.S. in zero emissions vehicle infrastructure as part of the dieselgate scandal. Perhaps these stations could come to the U.S. as well.