Jaguar D-Type racer XKD 510 has been owned by a Le Mans winner, suffered a crash in which it claimed two drivers' lives, been rebodied and rebuilt, displayed in a museum, and next it heads to Mossgreen's auction in Melbourne

The headline on the news release proclaimed that the “£4.7 million Jaguar to be sold by Mossgreen at Motorclassica is highest value car ever to be auctioned in Australia.”

The car is a Jaguar D-Type, one of the most sought-after vehicles in the collector car world, so rarely available and so desirable that the 1955 D-Type that won at Le Mans in 1956 sold last year at RM Sotheby’s Monterey auction for a record $21.78 million.

So the D-Type being offered for sale October 14 at Mossgreen’s auction at the Royal Exhibition Building in Melbourne would seem a bargain with its pre-sale estimated value of $6.75 million (U.S.), especially since its former owners includes 1953 Le Mans-winner Duncan Hamilton, right?

The D-Type going to auction is chassis XKD510, purchased in 1956 by Hamilton after having been driven some 250 miles, much of that presumably by Richard Wilkins, a physician who bought it from Jaguar dealer John Coombs. With Hamilton driving another D-Type, he loaned the 510 car to Graham Whitehead, who drove it to fifth place in the Dakar Grand Prix in 1956.

Hamilton loaned the car again, for the Goodwood Easter meeting in 1956, but the driver, Tony Dennis, crashed and died in the race.

Hamilton sold the car to Gerald Ashmore, who rebuilt the car, changed its color from British Racing Green to maroon, and raced it extensively in England for three years before selling the car to Neville Taylor, who converted the car to road-legal XKSS specification while also racing it for three seasons.

According to Mossgreen, the car had been painted yellow when it was sold in the summer of 1963 to the Jaguar importer in Singapore, where it was purchased by Young Nam Kee, winner of the inaugural Malaysia Grand Prix in 1962.

According to the very detailed coventryracers.com website, the driver was running second when he was killed in a crash that broke the car in half and sent part of it over a cliff.

Mossgreen notes that the car was sold and put into storage until 1967, when it was purchased by John Halihan, who shipped it to his native Australia, where he sold it to Jaguar collector Ian Cummins, who had Classic Autocraft rebuild the car around the original front bulkhead and driver’s foot box. The tub was re-skinned using XKD 526 as its pattern and the original hood, tail section, engine, gearbox and knock-off wheels and other components also were used in the reconstruction, Mossgreen notes. 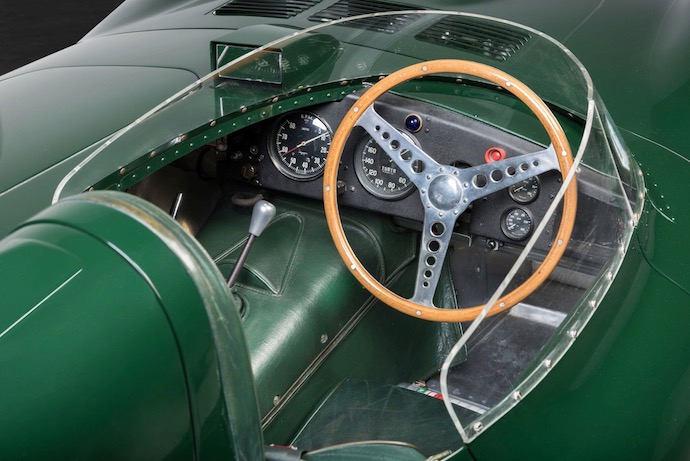 The rebuild was completed in 1981 and the car was sold in 1982 to Bib Stilwell, an Australian racing champion who was the first owner of D-Type XKD 520. Stilwell raced the 510 car in the United States when he served as president of Gates Learjet. Coventryracers points out that the car crashed in races at Detroit and Laguna Seca.

Subsequent owners included Victor Gauntlett of Aston Martin before the car was purchased for a second time by Cummins in 1988, who took it back to Australia. In 1997 the car was sold to big-band leader Warren Daly and was showcased at a succession of major races in Australia.

Coventryracers notes that the car was sold to Simon Kitson and for several years the car was on display at the Donington Motor Museum in England before returning yet again to Australia.

"The Jaguar D-Type is one of the world’s most significant and collectible marques, and we are thrilled and excited to have this exceptional and historic car consigned to our inaugural Motorclassica Auction,” Mossgreen chief executive Paul Sumner said in the company’s news release.

“Along with impeccable provenance and competition history, the D-Type is gorgeous, an absolute work of art, a sculpture on wheels, one of the most beautiful cars ever made. It’s the most valuable car to ever go to public auction in Australia, and no doubt will set new records on auction night at Motorclassica.”

“I can say that XKD 510 is in fact a car with a remarkable and continuous history,” the Mossgreen news release quotes Chris Keith Lucas, a specialist in post-war sports and racing cars. “It is nicely restored. In good condition and retains to this day some original material many other well-thought-of cars lost a long time ago.”

At the sale, the D-Type will be joined by 30 other collector cars and motorcycles, including a 1956 Cooper Climax T39 bob-tail sports car formerly raced by Lance Reventlow, and a 1934 MG Q Type with Australian racing history, the boat-tailed 1930 Ford Model A that set a record for the Sydney to Bourke run, and the 1924 Vauxhall 30/98 Tourer which set trans-continental and around-Australia records in the late 1930s.

The docket also includes a 1961 Jaguar E-Type 3.8 flat-floor coming out of single-family ownership after 43 years.