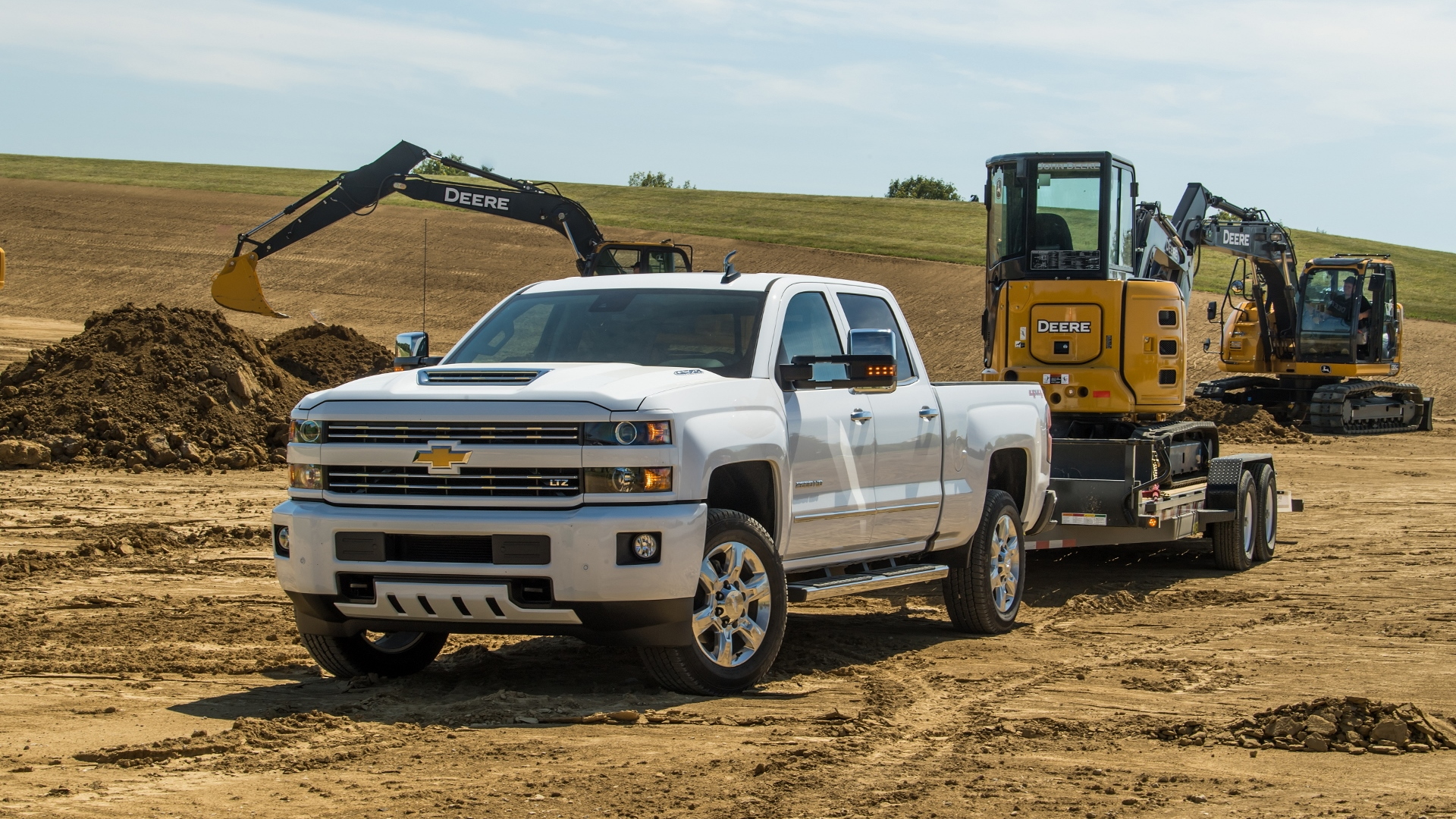 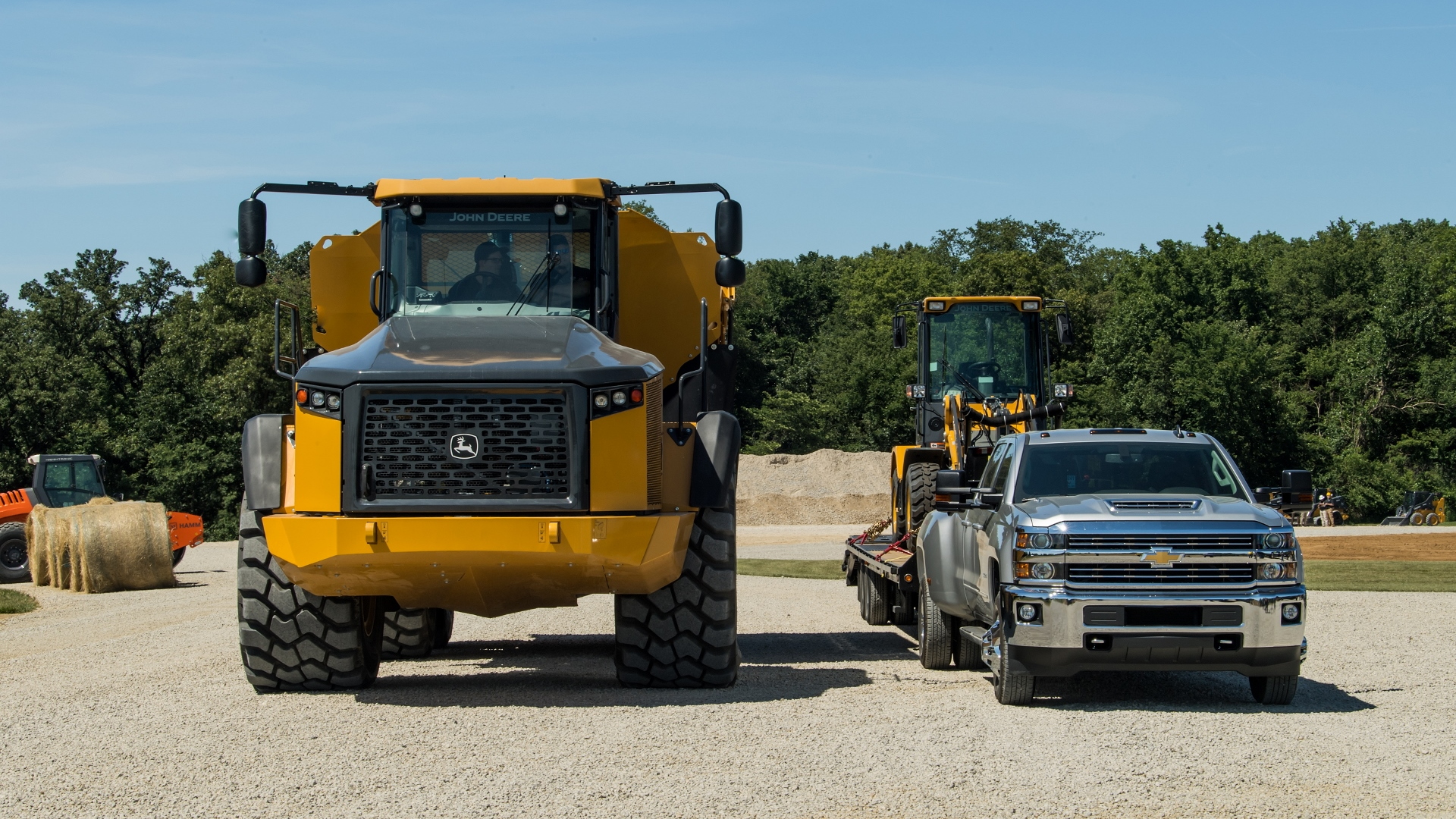 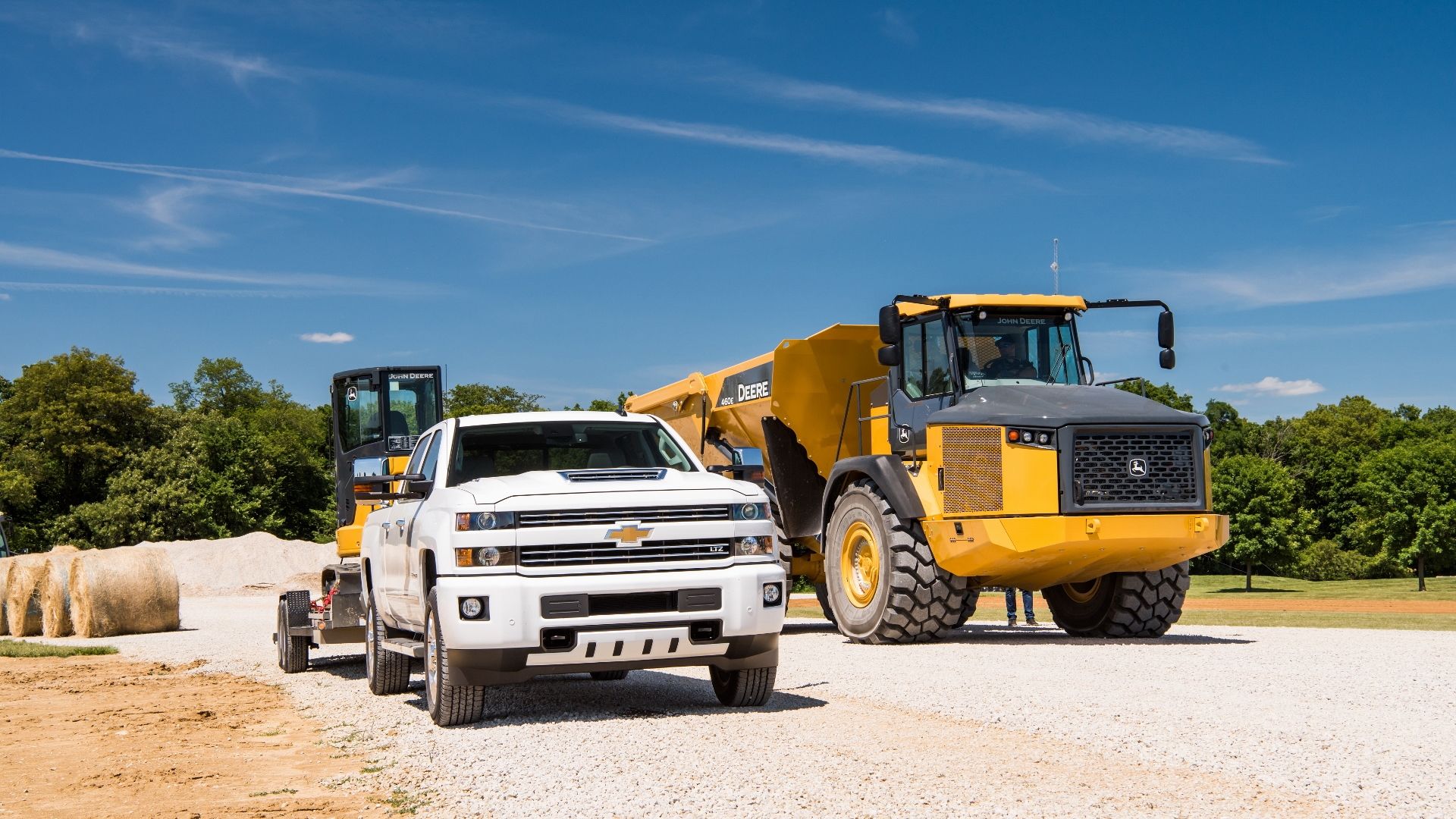 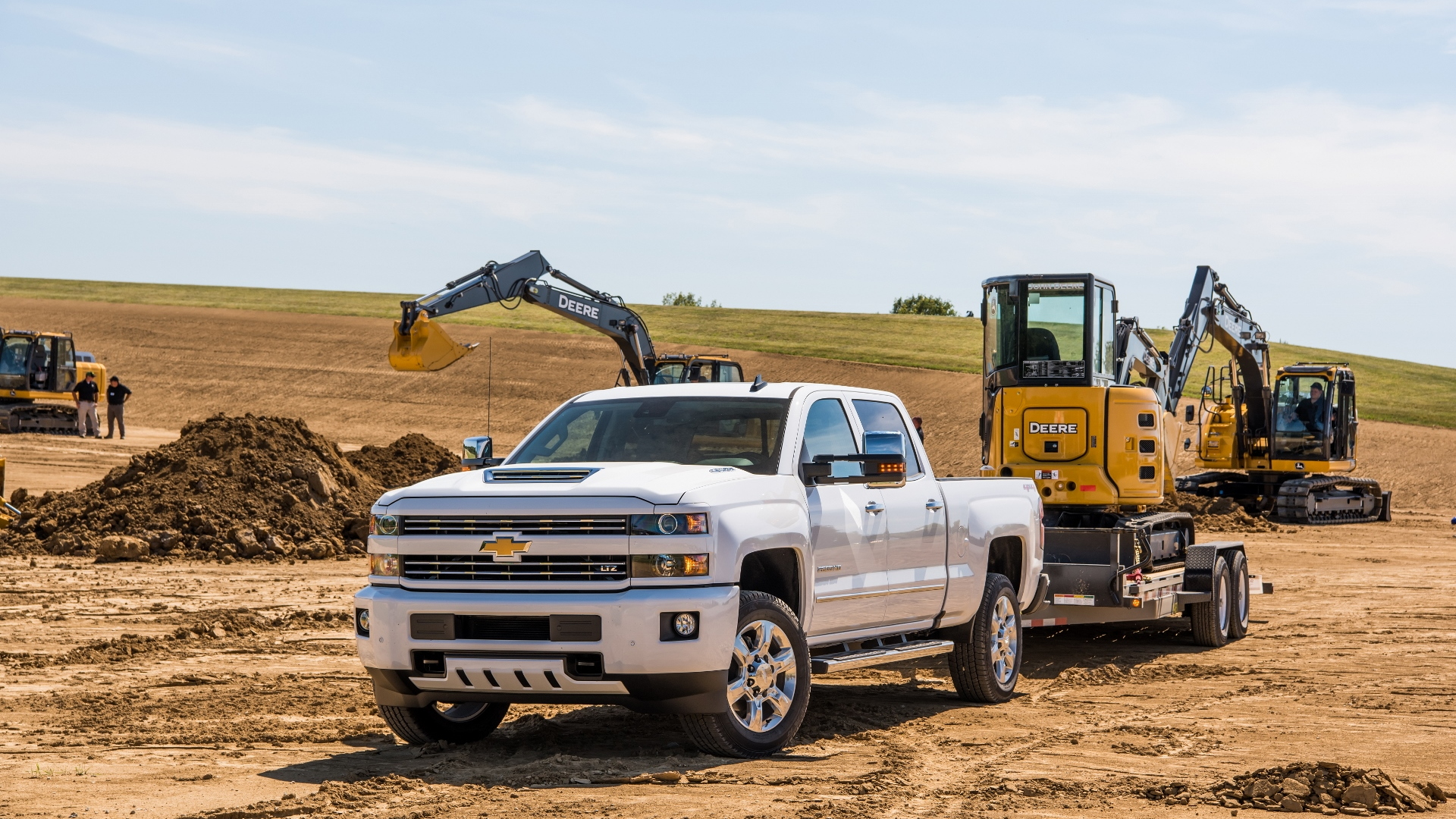 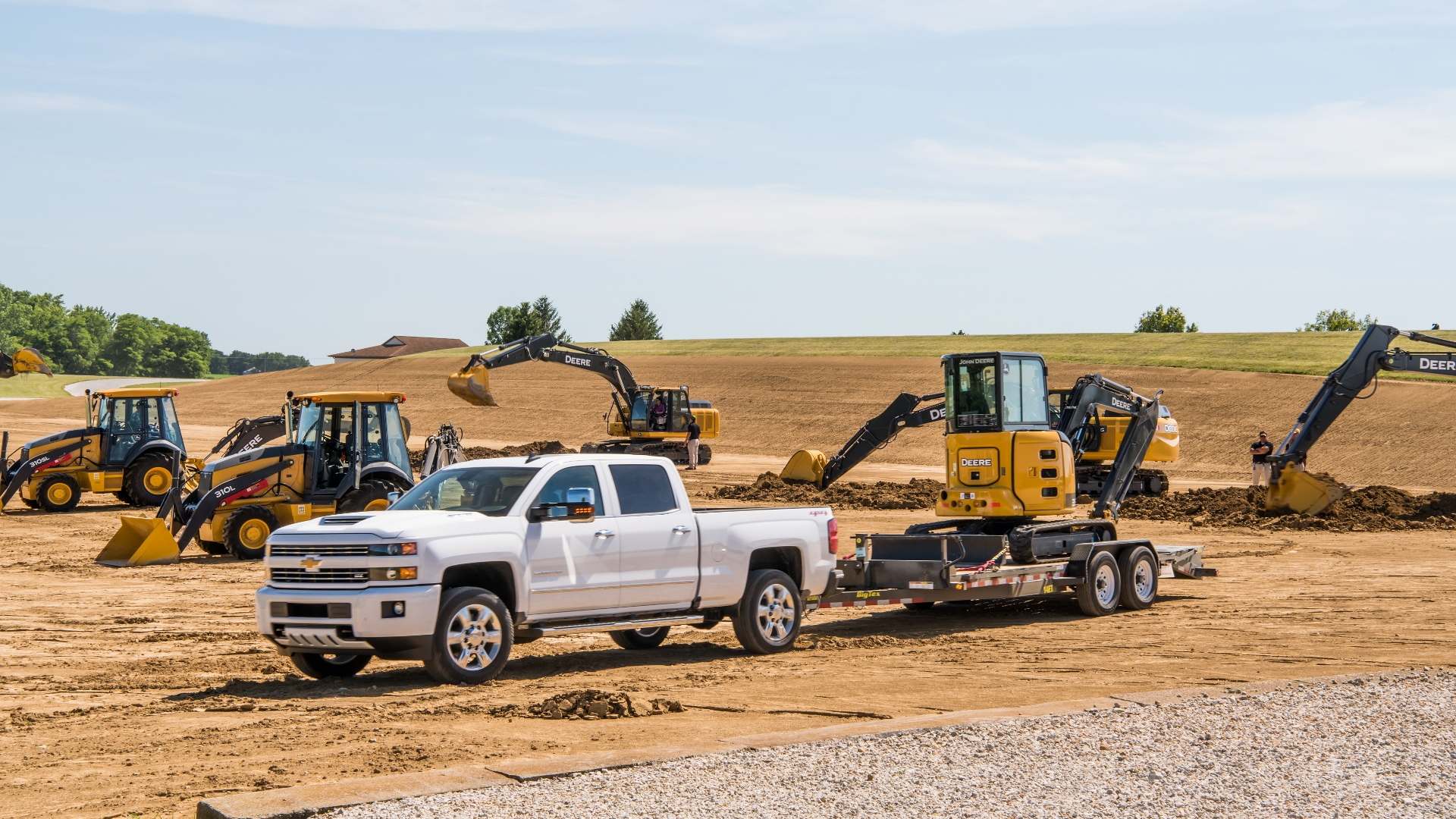 When I was just a wee lad, I spent countless hours in the sandbox playing with my Hot Wheels and Tonka trucks. The scale discrepancy didn't bother me because the Tonka trucks worked great for grading the sand into roads and freeway off-ramps for my Hot Wheels.

This week, I got the chance to relive those memories, but on a much larger scale. Chevrolet and John Deere teamed up to give a few automotive journalists a "day in the life of a heavy equipment operator" experience at John Deere's proving grounds in Coal Valley, Illinois.

Chevrolet put this little adventure together to show off the updated Duramax diesel engine in its Silverado 2500 and 3500 HD pickups--you know, the kind of trucks that independent contractors and owner operators might use as a tool for their work.

Let me tell you, playing in an adult sand box is even more fun than doing it as a kid.

Chevy says its turbocharged 6.6-liter Duramax diesel V-8 has 90 percent new parts, including the crank, rods, pistons, exhaust, turbo, and fuel system, among others. The block and cylinder heads are stronger, and the oil and coolant systems now flow at higher capacities.

As a result, emissions are reduced by 35 percent, horsepower is up 12 percent to 445, and torque increases 19 percent to 910 pound-feet. That's still 15 lb-ft shy of the 925 in Ford's Powerstroke diesel, but Chevy claims it isn't worried about winning the numbers game. To handle the extra torque, the tried-and-true Allison 6-speed automatic transmission also gets a beefier output shaft, torque converter, and valve body.

Otherwise, the the truck is pretty much the same as it was last year, except for a newly functional hood scoop that takes in cooler air and filters out rain, snow, and other debris.

My "day in the life" experience" started with a towing demonstration in Duramax-equipped Silverado 2500 and 3500 HDs. My first ride was in a 3500 duallie hitched to a 22,000-pound load, close to its 22,600 max towing capacity. The trailer was a fifth-wheel unit, and Chevrolet wouldn't let journalists drive unless they had a Commercial Driver's LIcense. I'm not a professional truck driver, which relegated me to the passenger seat.

From there, I could feel the 11-ton load desperately trying to act as a big brake, applying a constant drag on the truck. Still, the Duramax got it up to freeway speeds in a reasonable amount of time and kept it going up grades, while the truck kept things stable. Chevy's integrated exhaust and trailer brakes helped slow things down at off-ramps, too.

Then I got to drive an HD 3500 unladen, and found it to be purt near quick. Car and Driver was able to get this powertrain to deliver a 6.2-second 0-to-60-mph time in a 2500 model, which is almost sports-car quick. In a 3500 duallie, the time is probably a second or more slower, but it still moves out quicker than expected for such a large truck.

After feeling the drag of the big trailer in my first ride, the small trailer felt quite light. The truck accelerated well, handled hills easily, remained stable, and braked without drama. It's the same engine and transmission, after all. The difference in towing capacity is due only to how robust the truck's structure is.

My final drive came in another 2500, this one without a trailer. Lighter than the 3500, it was even quicker. It's odd to call a diesel quick, especially in a heavy-duty pickup, but that's what the Duramax/Allison combination delivers.

Driving a big, honkin' truck may make anyone feel manly, but it was what came next that really got the testosterone flowing. While you "drive" trucks, you "operate" heavy equipment, and that was next on the agenda. With the towing demonstration out of the way, we headed to John Deere's proving grounds for five different heavy equipment exercises.

I started small, with John Deere's 310SL Backhoe Loader—which acts as an excavator on one end, thanks to its digging arm, and a loader on the other end due to its articulating bucket. I suppose the point here is that you can dig the hole with one end, then turn the equipment around and haul the dirt away with the other end.

As a first-timer, I'm sure I looked pretty awful behind the controls. It's easy to get your x, y, and z axes screwed up when moving the bucket up and down and in and out, so I found I often sent the bucket the wrong direction. A light touch is also highly recommended. Move the bucket quickly and stop it on a dime and you can jostle the whole rig. Nonetheless, I was able to dig a hole, which felt like something of a feat, though the 310SL didn't want to go deeper than about 18 inches.

The 160G was next. It rides on tracks instead of wheels and is strictly an excavator. It has a longer arm and can dig deeper, but its controls work the same way. With a little bit more experience under my belt, I worked at digging a hole and filling it back in.

The closest analogy I can find for working these controls is video games. The more you play, or in this case operate, the better you will get. It's probably best to put your hand lower on the joystick so you don't make big commands, though a steady hand might make it possible to make pinpoint commands high on the joystick.

At the end of the day, it was amazing to see the speed and precision with which John Deere's people filled in the holes we had made and smoothed them over. That comes only with long experience.

Then there was the track loader: like a skid steer but with tracks instead of wheels. This beast has an articulating bucket that can lift and move whatever material you need moved.

I got to play in a rock pile with the 333G, the largest of John Deere's Track Loaders. It has a 3,700-pound operating capacity, which means that bucket can lift almost two tons of stuff up high and move it to wherever you need. With 97 horsepower, it gets around pretty good, too.

Like the excavators, it is operated via a pair of joysticks that present the same challenges, and it also has a throttle pedal to add a bit of oomph when you need to dig deeper into the rock pile. The skids make it easy to turn this thing on a dime.

The 9570RX Scraper is as close as I got to reliving those days in my sand pile. This beast is used to clear and level land for road construction and construction sites. It may look like a monster, but it proved to be quite easy to operate.

It consists of a 570-horsepower tractor that tows a scraper trailer. A series of buttons are programmed to move that scraper up and down to scrape high points of the earth and dump them onto the lower points. When scraping, it moves along at about 4.5 mph and it has a cruise control system that is programmable with a thumbwheel up to speeds of 26 mph. The tractor alone weighs 60,000 pounds and it can tow 4.5 times its weight.

Operating it is easy, thanks to the 18-speed transmission, the suspended cab, and the carlike controls. I could put in a good day's work moving dirt in this highly automated and well-designed tractor.

I ended the day in the biggest beast they had: Deere's 71,000-pound 460E Dump Truck (the rep said this example actually weighed closer to 78,000 pounds with its extras).

While the horsepower is pegged at just 481, torque is in the neighborhood of 1,700 from the John Deere-built diesel engine. That articulating dump bed has a payload of 46 tons. That means when loaded this thing can weigh 163,000 (or in this case, 170,000) pounds. It employs 6-wheel drive to get all that power moving and the axles disconnect in turns. The tires are massive 876/65R29s.

Again, operating the 460E proved to be easier than expected. With an 8-speed automatic transmission and a standard steering wheel, brake pedal, and throttle pedal, it drives like a really, really big truck.

I took it on about a 1-mile loop and had no problem keeping the throttle pegged at the event-limited 17 mph top speed while making turns. The actual top speed is twice that high. The only issue I had was fighting the urge to crush the tiny Chevy Suburbans and Silverado 3500 HDs, even some smaller John Deere equipment, parked along that loop.

Overall, my "day-in-the-life" experience was eye-opening. It takes real skill to operate some of this stuff, and the automation in some of the larger pieces of equipment makes them relatively easy to control. All of it is impressive machinery.

Thankfully, I didn't bury any Chevy trucks under the dirt, even though it was tempting given the capability and sheer size of some of this equipment. That would be a shame because Chevy's HD pickups are right up there with the best on the market.

Maybe I could take the 310SL to New Berlin to dig up those old Redlines...