The Race of Champions is an annual motorsport event held since 1988 that brings together the best drivers from various competitions to compete against one another in a variety of cars. In 2017 the ROC was held on January 21-22 in Miami, Florida and saw some big names compete including Formula One ace Sebastian Vettel, endurance racing legend Tom Kristensen, and NASCAR’s Kyle and Kurt Busch.

The winner turned out to be current IndyCar driver Juan Pablo Montoya. The Colombian was up against ROC veteran Tom Kristensen in the final. The Dane has now reached the final round no less than five times but has never won the title. By contrast it was Montoya’s first ROC.

A total of 16 drivers were competing. They were split into four groups (A,B, C and D), battling for the right to line up in the knockout stages. The top drivers then progressed to the quarter-finals, and then the semis and final. 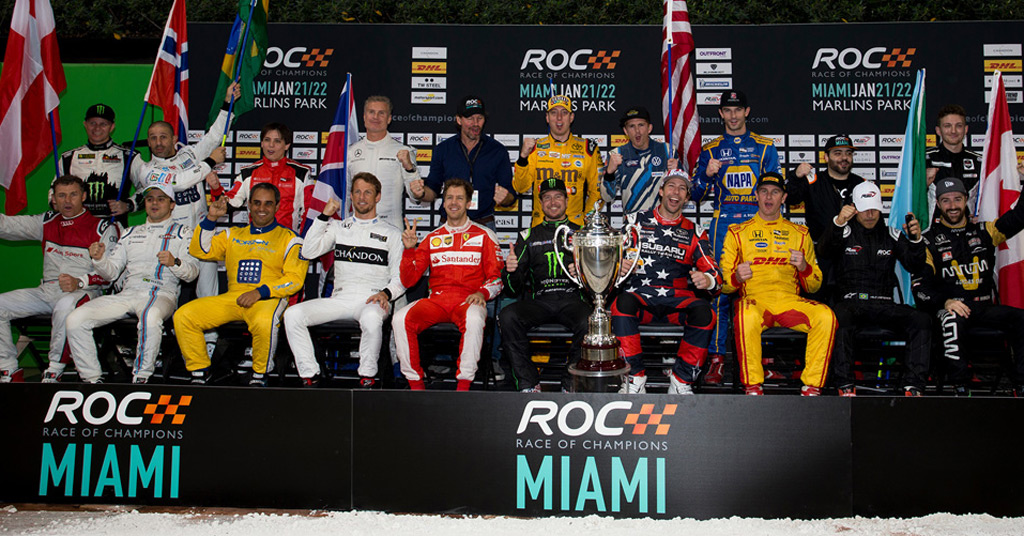 2017 Race of Champions in Miami, Florida

Kyle Busch and Travis Pastrana were the most successful of the American drivers, both reaching the quarter-finals.

The ROC also contains the separate Nations’ Cup. In 2017 it was Sebastian Vettel who took the trophy for Germany. Vettel was the reigning champion in the individual event but was knocked out in the group stages.

Of course, with this many top-level competitors, there was always going to be some rough action. While racing in a Polaris Slingshot, upcoming F1 driver Pascal Wehrlein came into contact with Felipe Massa, with his car then flipping and crashing into a barrier. He was unharmed but sat out from further competition as a precaution. He will now have to pass a medical examination ahead of the 2017 F1 season’s first test in February. Wehrlein was recently signed as a driver for Sauber.