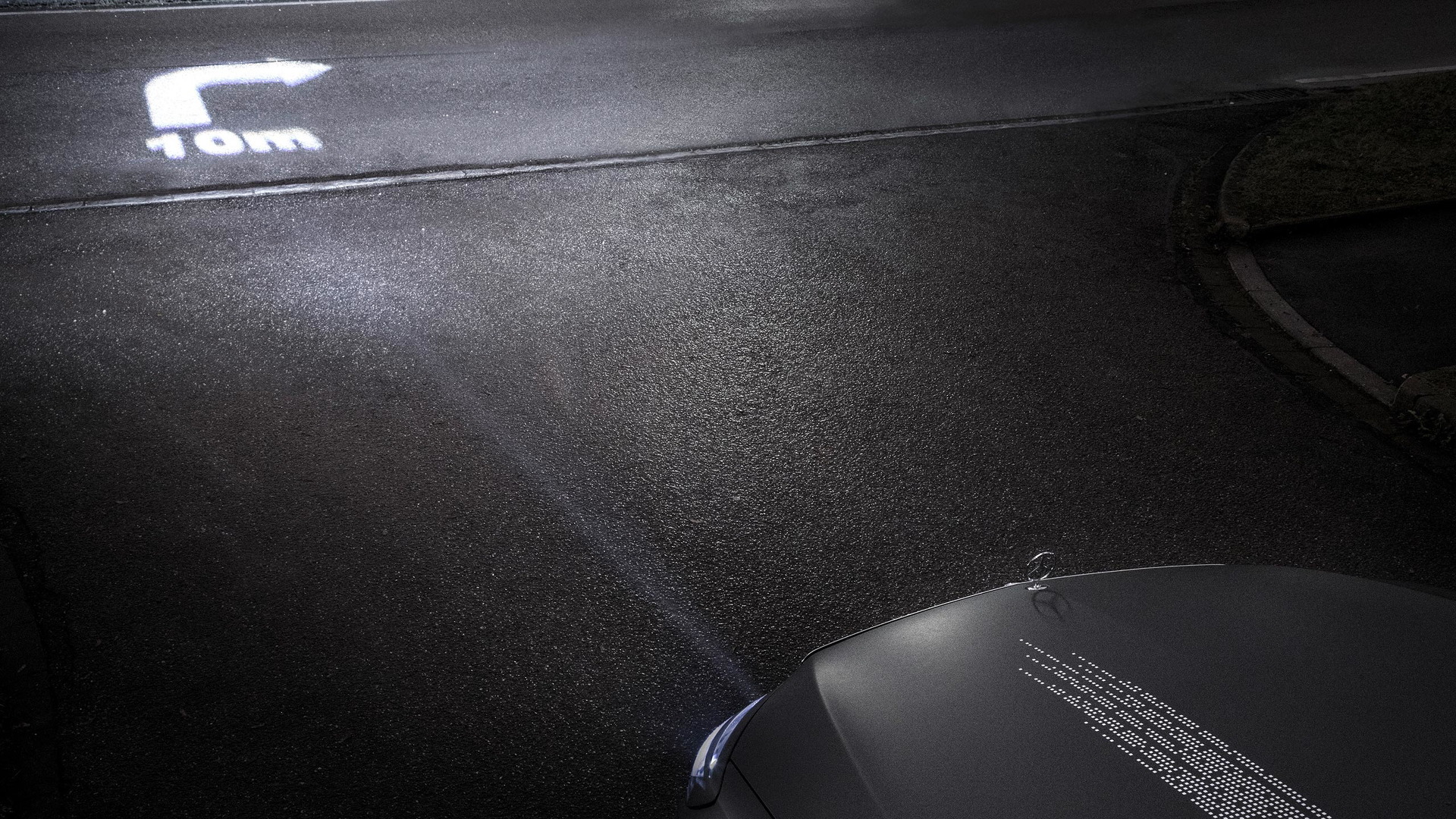 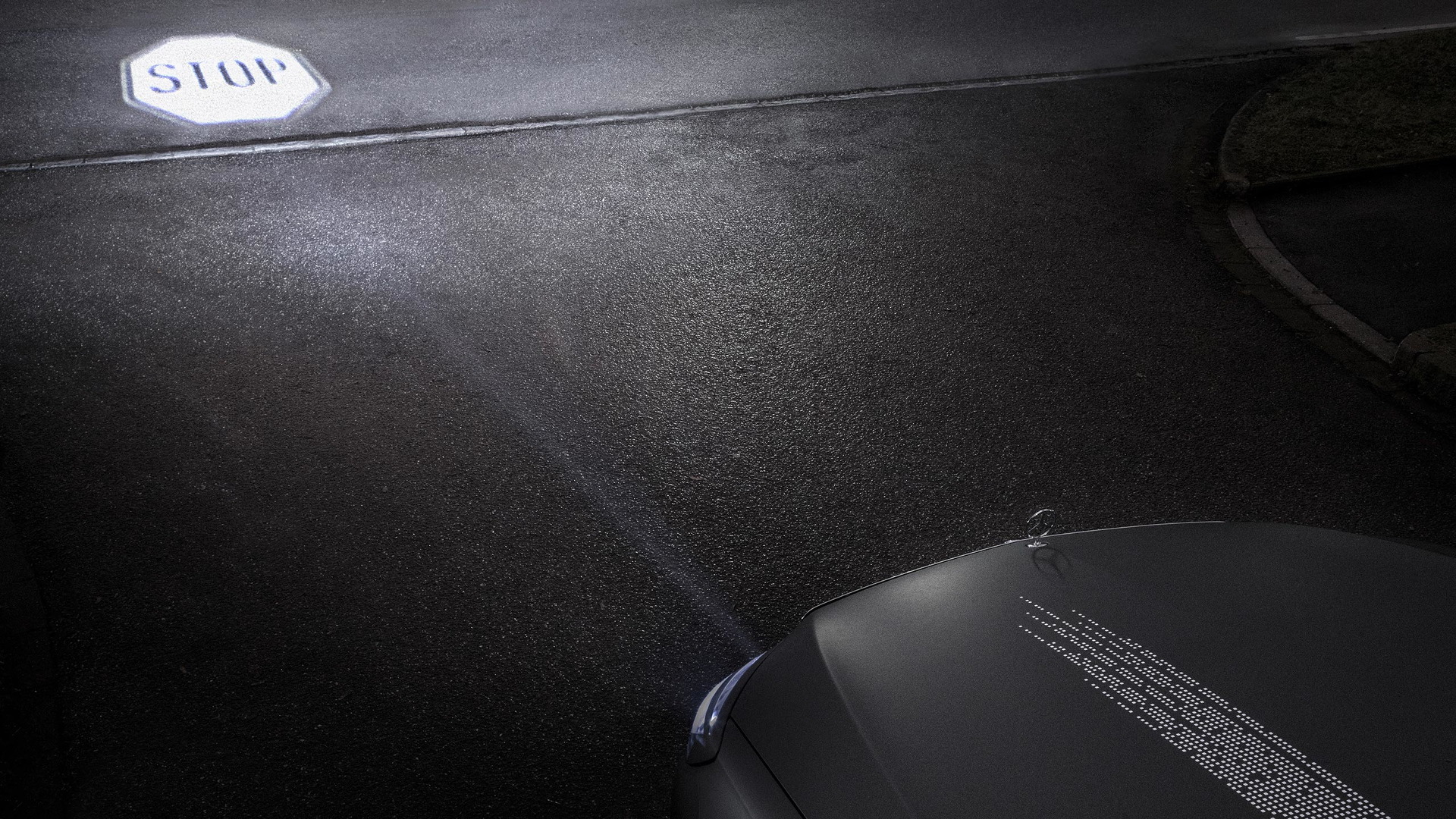 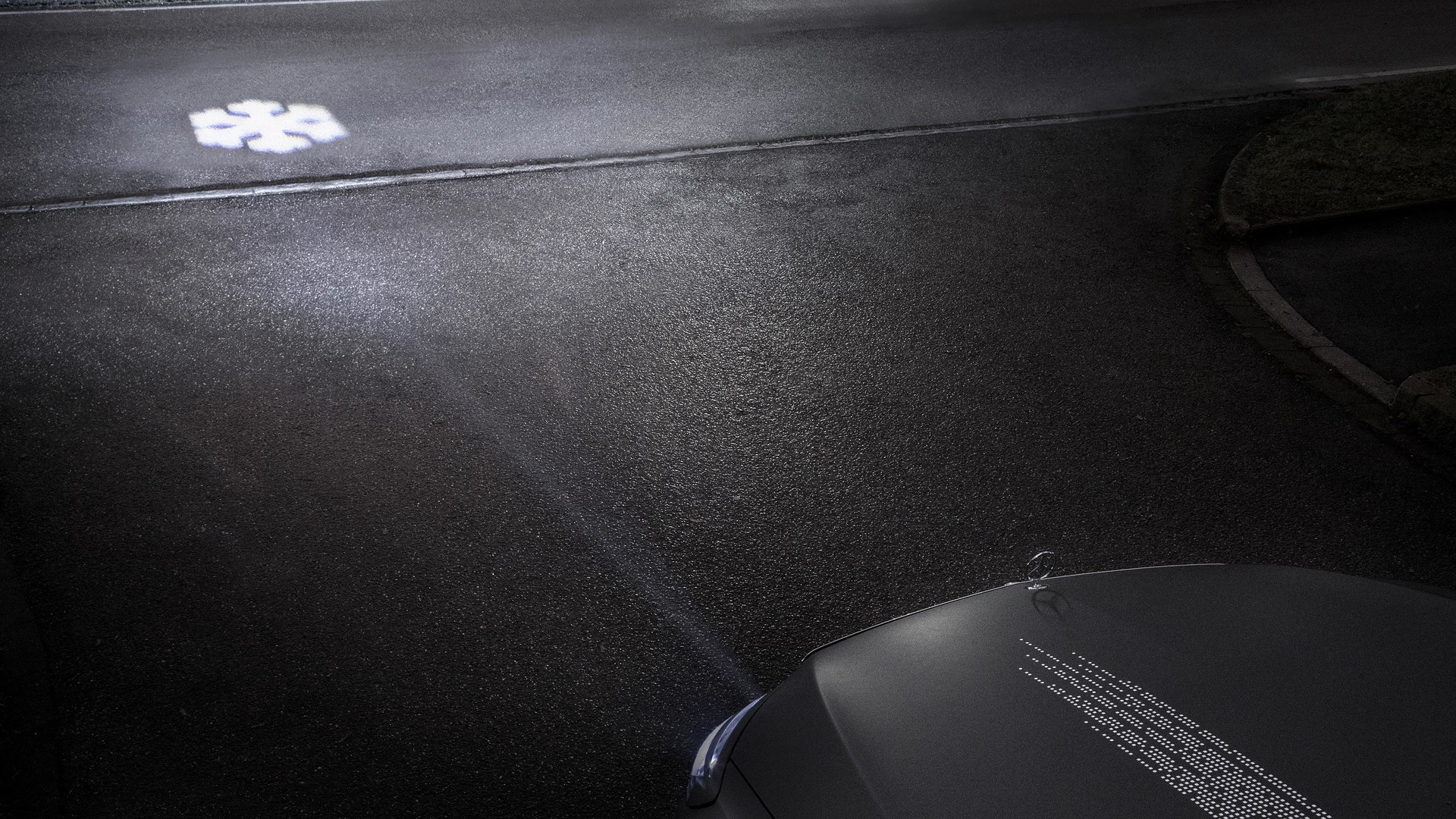 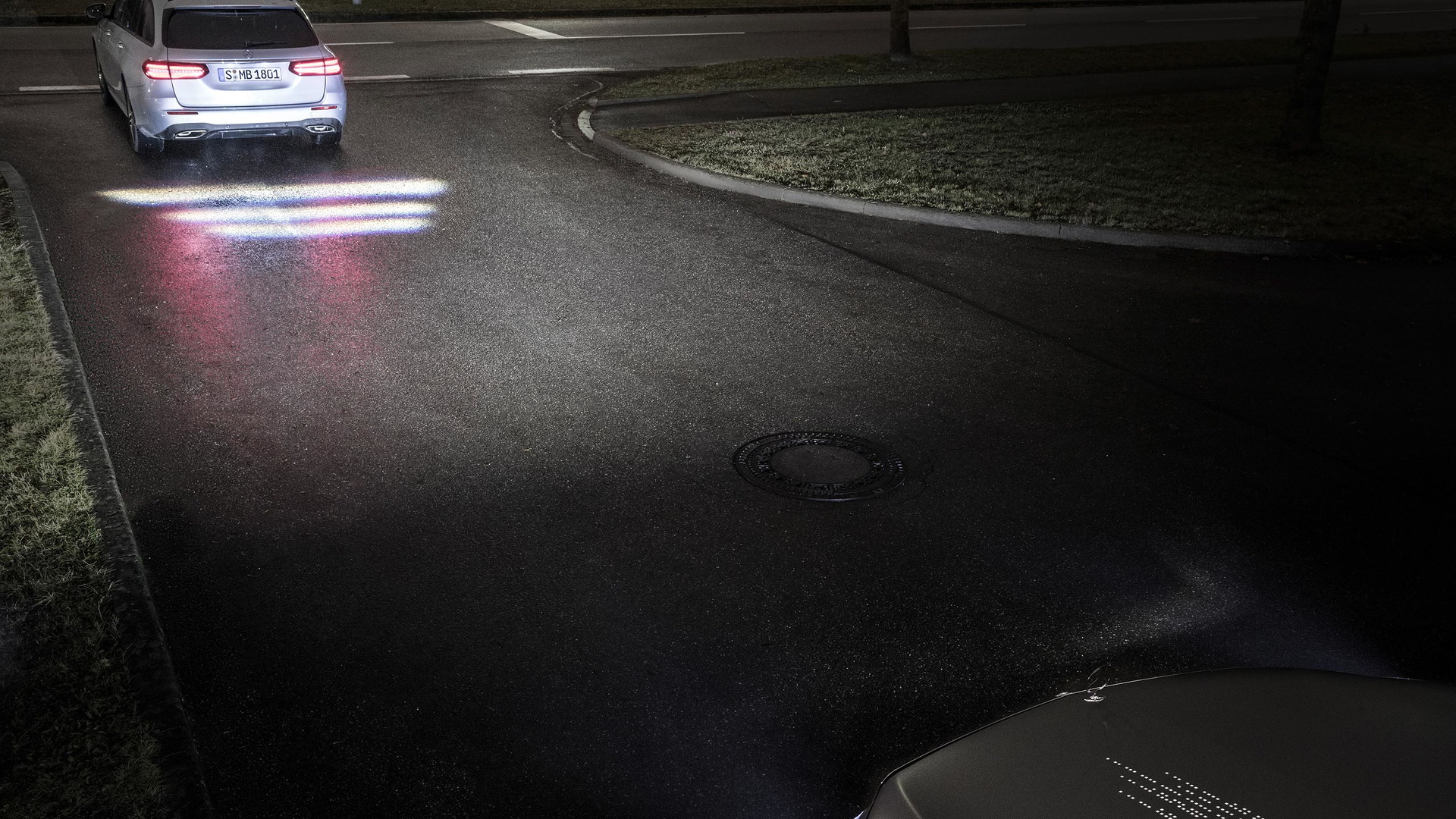 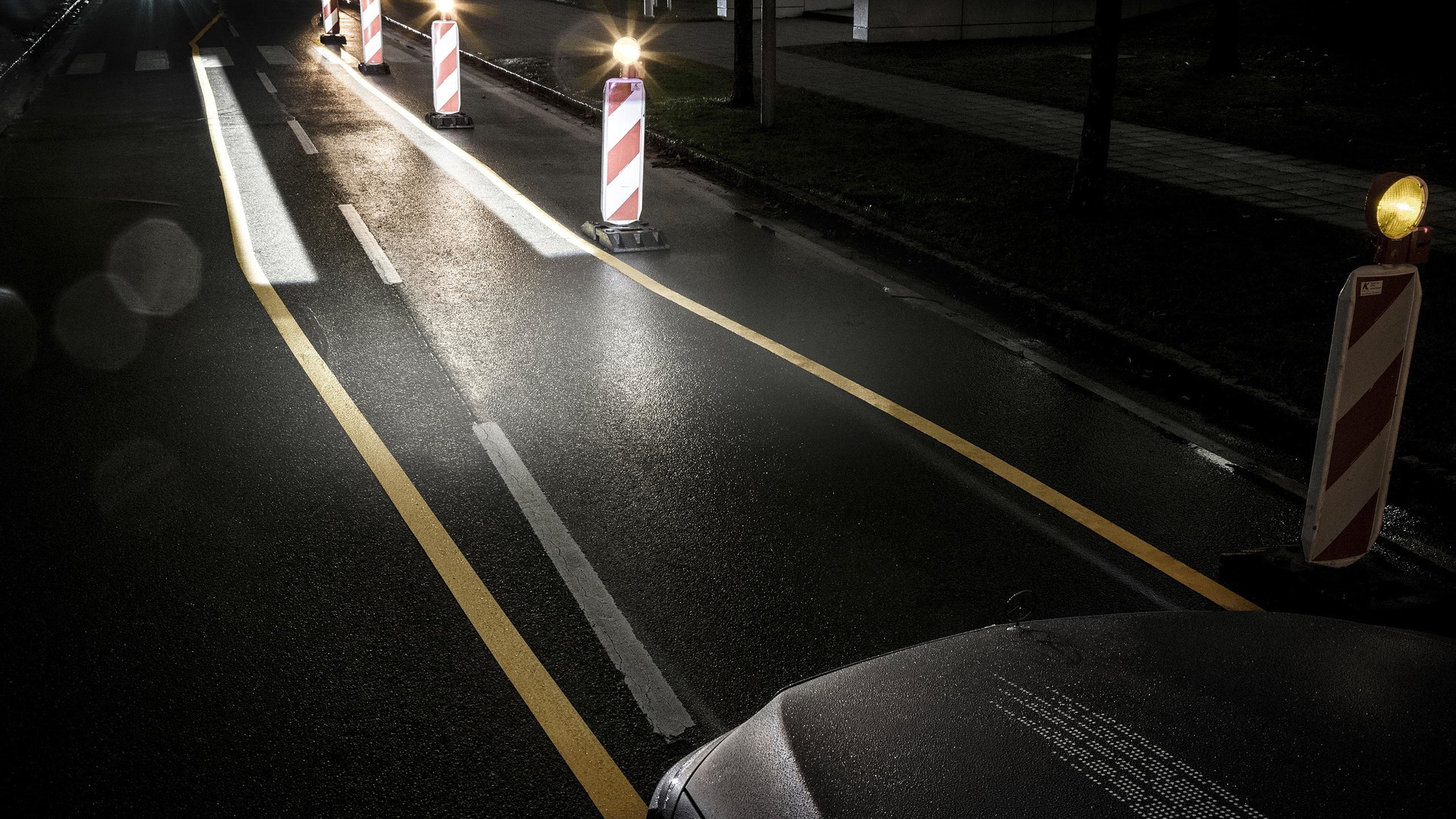 Mercedes-Benz has developed a new type of headlight with such precise control of the light beam that it can project complex symbols, including words, onto the road ahead to help inform the driver of his or her surroundings. Mercedes calls the technology HD (High-Definition) headlights and plans to launch it soon, most likely on an updated S-Class being introduced for the 2018 model year.

The headlights are an evolution of matrix LED technology, where each headlight is made up of multiple LEDs that can be controlled to adjust the light beam. The new HD headlights feature computer chips that work with over two million adjustable micromirrors (one million per headlight) to enable ultra-precise control of the light beam.

The key to controlling the light beam are special algorithms that receive detailed information about the surroundings from the vehicle sensors, such as cameras or radar, and from it calculate in real time the brightness value for each of the two million micromirrors. For example, the system can detect a pedestrian on the road and light up their body but leave their head in the dark, so that they are not dazzled. It can do this also for other cars and bicycles.

The headlights can also be used to guide and support the driver in a targeted manner in critical situations such as driving through narrow roadworks. Additionally, it will be possible to project light traces onto the road to replace missing road markings. The headlights can even project messages like direction arrows or warnings onto the road.

Because of the precise control of the light beam, it means there no longer needs to be separate low- and high-beam modes for headlights. Instead, the lights are always in high-beam mode and are automatically controlled so that they don’t dazzle other road users. Unfortunately, this means we’re unlikely to see the technology offered in the United States anytime soon as regulations here still require cars to have separate, driver-controllable low- and high-beam modes.