There are now just two races left in the 2016 Formula One World Championship and taking the penultimate spot is the Brazilian Grand Prix, which is on this weekend at Sao Paulo’s legendary Autódromo José Carlos Pace, commonly known as Interlagos.

The championship is very much Nico Rosberg’s to lose. He has a 19-point lead over his Mercedes AMG teammate Lewis Hamilton, which means he can still take home the title if Hamilton wins the Brazilian race and the final in Abu Dhabi. Rosberg just has to make sure he comes second both times.

Of course, if Rosberg wins the Brazilian race, which he's done on the last two occasions, he’ll be crowned champion on Sunday. It will be the first title for Rosberg, whose father Keke Rosberg took home the title in 1982.

It should be an interesting race on Sunday. Interlagos is a favorite with both fans and teams. The 2.6-mile circuit is one of the oldest in F1, having hosted its first grand prix in 1973, and though it’s been altered and made safer since that first race, it retains much of its original character. 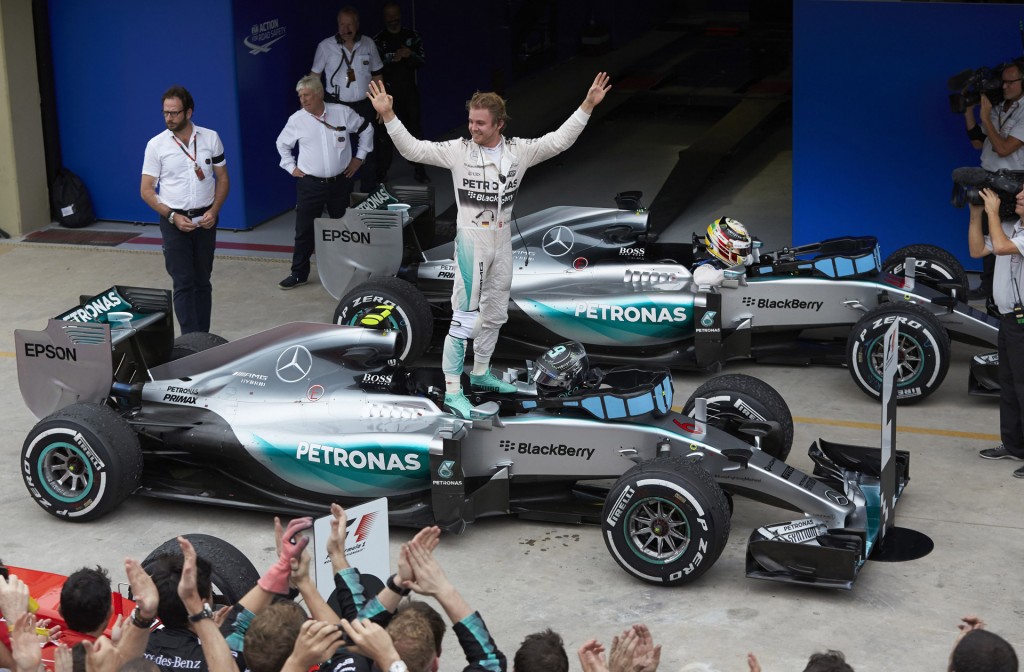 The circuit is built on marshland between two lakes, hence the name Interlagos, and its soft foundations mean bumps appear over time. The surface was renewed just two years ago but it's already become bumpy. The changing surface also means many tiny cracks appear, which aids grip levels.

One issue to watch out here is the changeable weather. Should it rain, which is normal for the Brazilian race, the undulating nature of the circuit means water patches form very quickly at various points around the lap. The depth of water is particularly bad at the exit of Turn 3, where lots of cars have spun in the past. The current weather forecast calls for rain throughout the weekend. Pirelli has nominated its hard, medium and soft compounds.

Going into the weekend, Rosberg sits on 349 points in the 2016 Drivers’ Championship. Hamilton is second with 330 points and Red Bull Racing’s Daniel Ricciardo is third with 242 points. In the Constructors’ Championship, the 2016 winner Mercedes has 679 points versus the 422 of Red Bull and 370 of Ferrari [NYSE:RACE].

In other F1 news, Kevin Magnussen, who was replaced by Nico Hülkenberg at Renault, has been confirmed for Haas in 2017. He will replace Esteban Gutierrez and thus drive alongside Romain Grosjean in the American team. And replacing Hülkenberg at Force India will be current Manor driver Esteban Ocon. Meanwhile, Williams has confirmed Canadian youngster Lance Stroll as the replacement for the retiring Felipe Massa.