It isn’t due to be unveiled until November’s 2016 Los Angeles auto show but Alfa Romeo’s first SUV, the Stelvio, has been partially revealed in an official promo video.

The video was posted to Fiat Chrysler Automobiles’ [NYSE:FCAU] YouTube page and has since been removed, though not before World Car Fans managed to snap this screenshot.

It shows a pre-production Stelvio being worked on at FCA’s plant in Cassino, Italy. The plant is where the Giulia sedan is currently in production. The two vehicles share the rear-wheel-drive Giorgio platform that debuted in the Giulia and offers the option of all-wheel drive.

The latest shot plus our own spy shots show that the Stelvio has been designed with a focus for on-road use. Buyers interested in off-roading will be directed to Jeep showrooms. Its low and lean and the almost couple-like profile of the roof lends the vehicle an athletic look that’s in keeping with the aura of the Alfa Romeo brand. 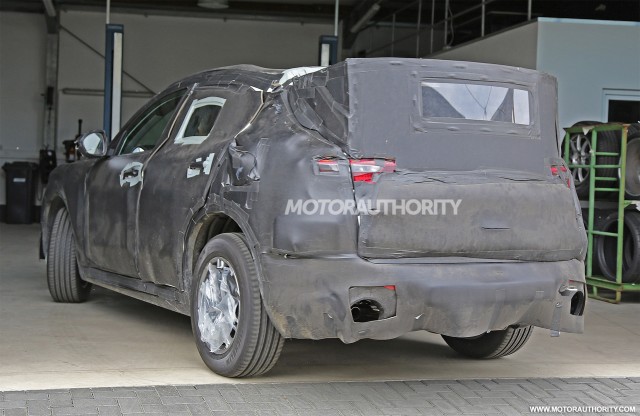 The Stelvio will target small SUVs in the premium sector such as BMW’s X3 and Mercedes-Benz’s GLC. It will eventually be joined by two more SUVs, in the mid-size and compact categories, respectively.

Assuming there aren’t further delays—it was originally due on sale in 2016—the Stelvio should be on sale in the summer of 2017, arriving as a 2018 model.

Stay tuned for the debut at the L.A. auto show, which starts November 14. For more from the show, head to our dedicated hub.