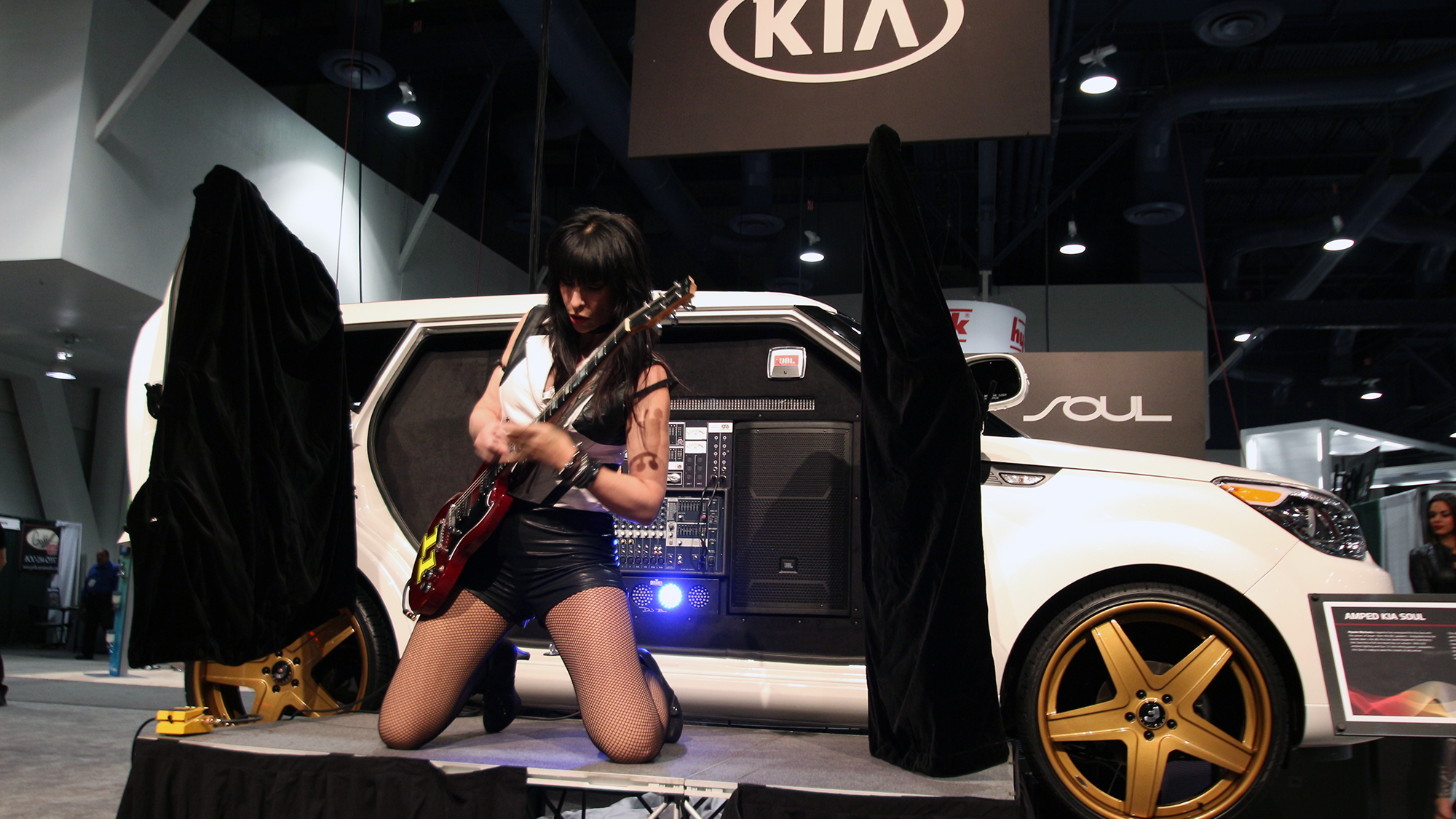 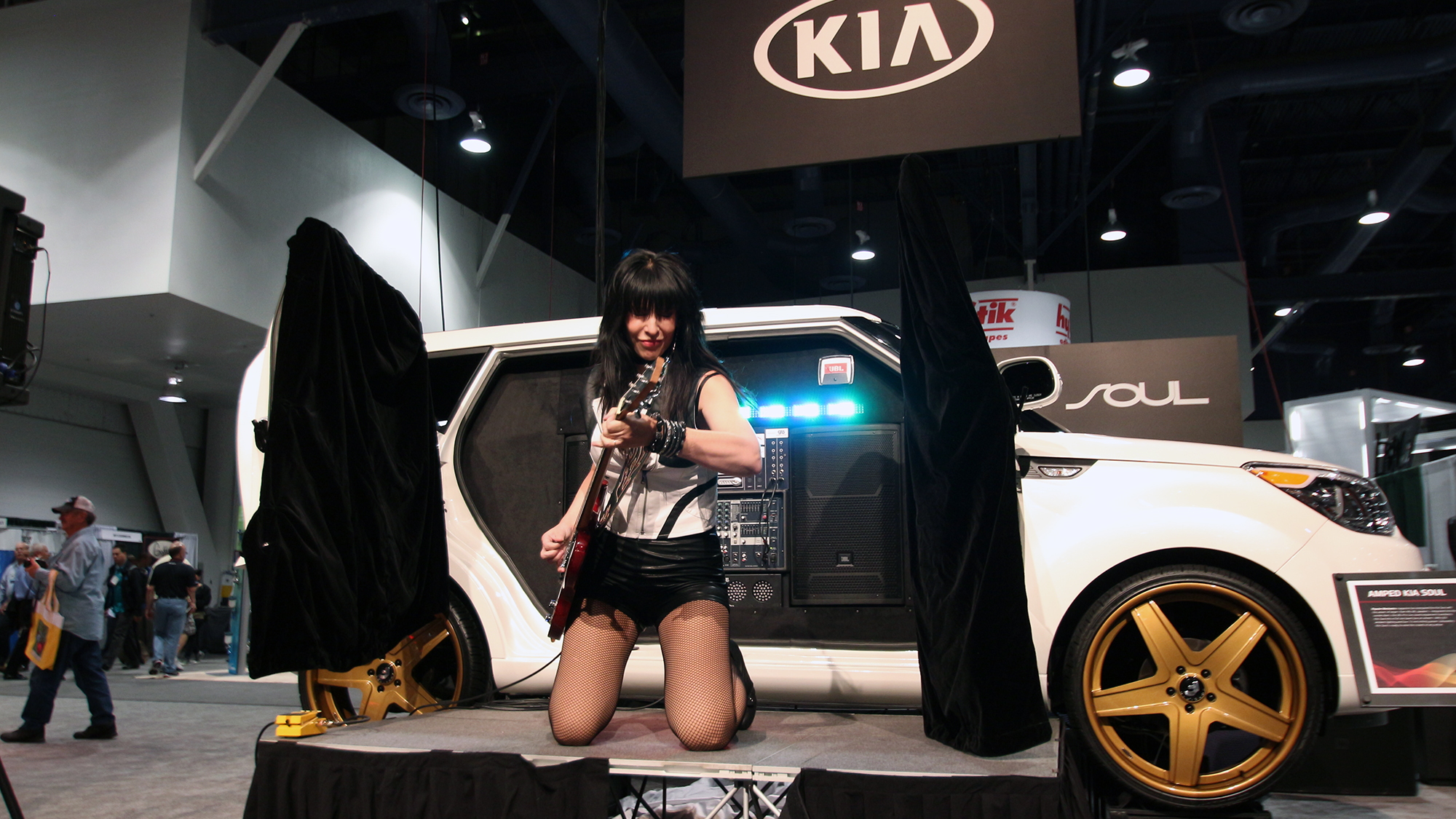 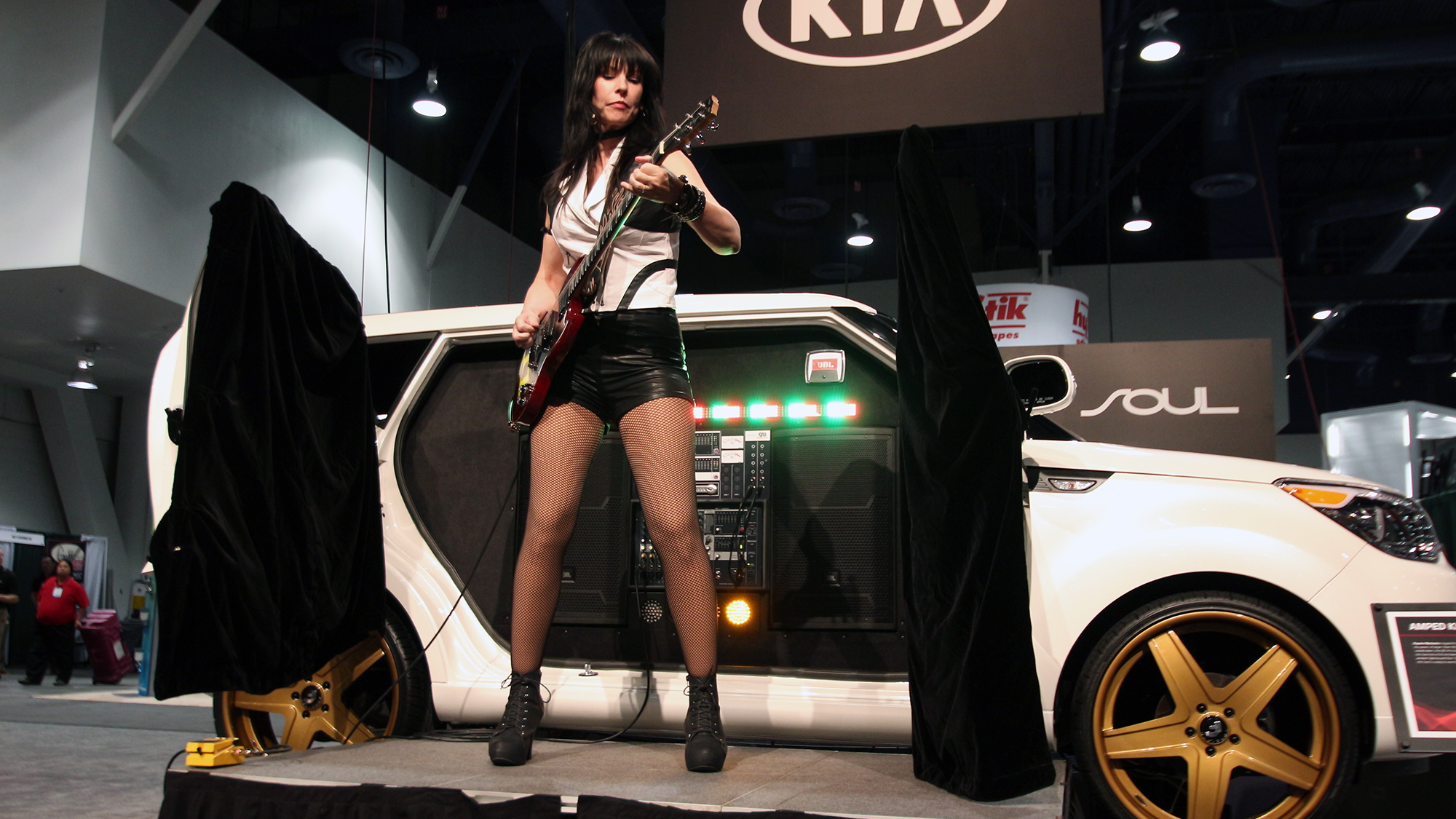 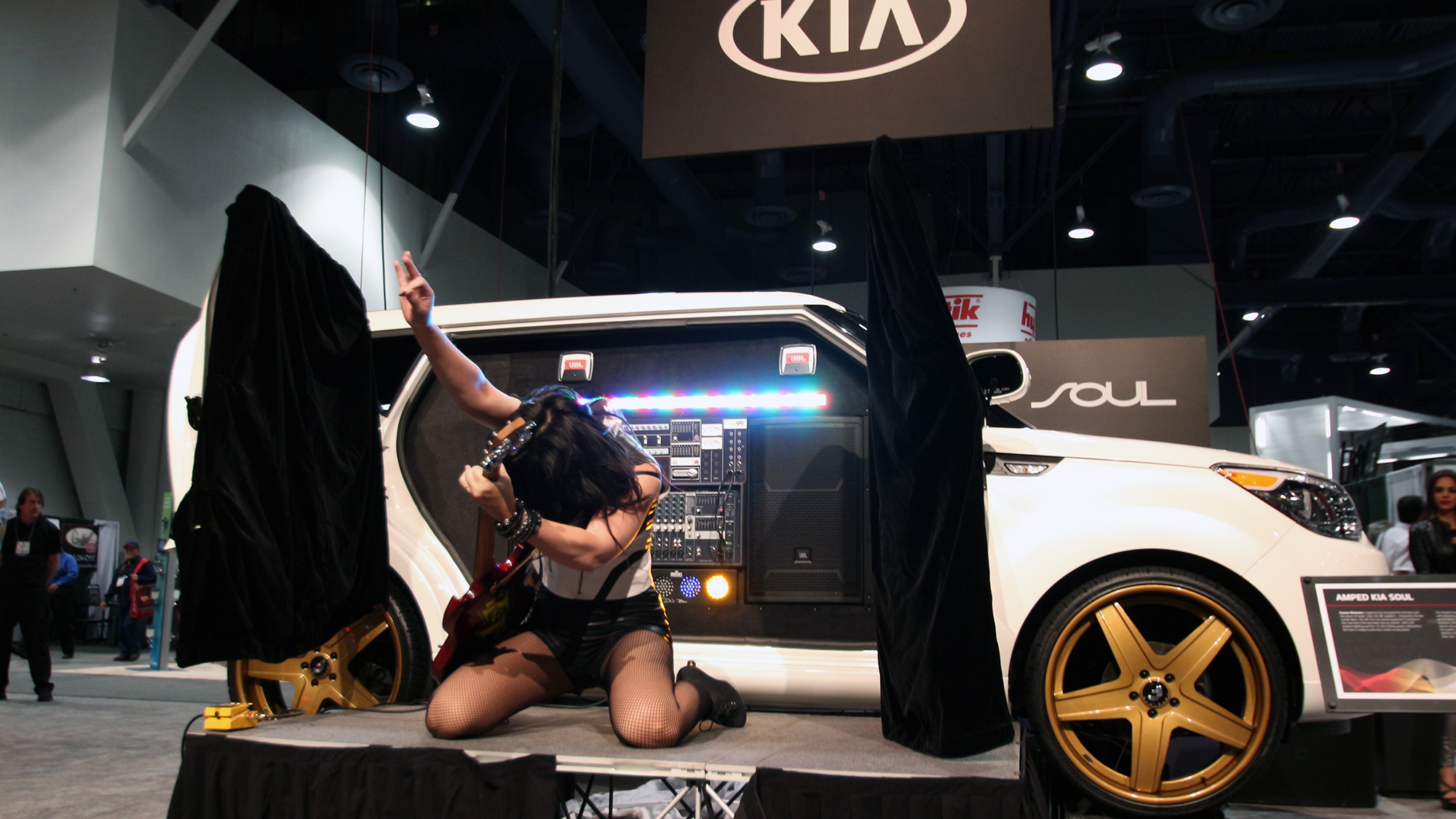 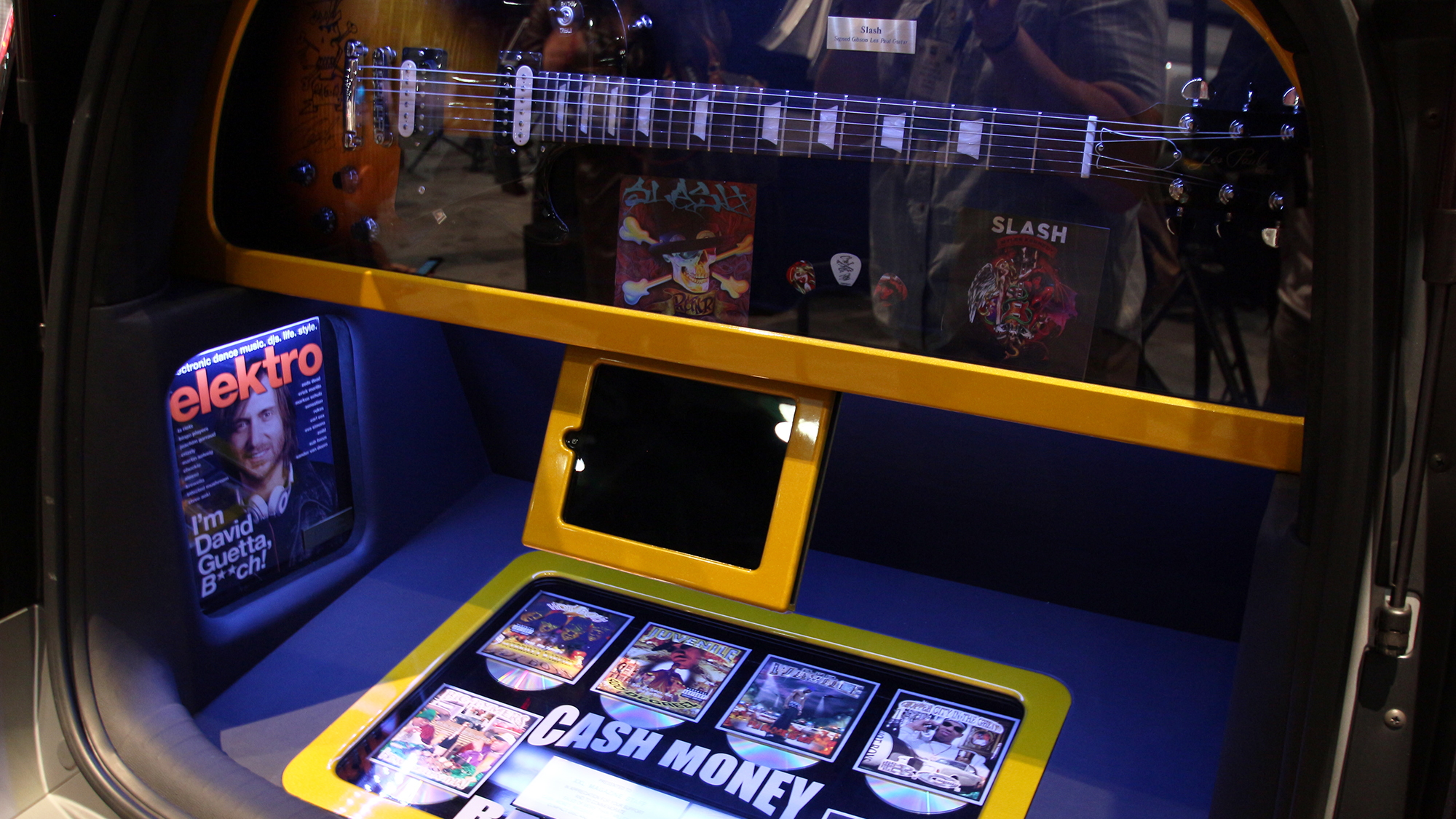 The SEMA show floor experienced some extra sights and sound. No, it wasn't from the notes of an aggressive exhaust pipe or from the glow caused by oversized wheels. Instead, it was due to Kia trotting out a variety of customized 2014 Soul machines, which have been transformed into platforms that can create great music. All in all it's five Souls that have been crafted into rolling works of art with a musical focus.

The Amped Soul is a joint effort between Popular Mechanics and the automaker. It has suicide doors that open to reveal a massive audio JBL audio stack. A portable platform connects to the vehicle, which turns it into a stage. To demonstrate this, Kia invited a kick-ass guitarist to come out and rip off some riffs for a few minutes. It sounded great, and it looked quite cool at the same time.

Popular Mechanics was called upon again for another one of the Souls, and this time they worked with Galpin Auto Sports to create a vehicle paying homage to the Vans Warped Tour. The side windows have been removed and replaced with a battalion of speakers, and a 50-inch flat screen sits atop the roof to display footage from the concert. The real magic happens out back, however, as a slide-out barbecue grill has been set into the rear of the Soul. This is the ultimate tailgate machine.

A DJ Booth Soul was created from the minds of the folks behinds RIDES magazine, and it provides a platform for any DJ to entertain his or her fans. It's filled with professional-grade audio equipment, and there's a central platform on which the DJ can stand. The roof is open so the DJ can survey the crowd as the music flows forth. We enjoy the purple paint scheme, but we're not exactly fans of the tri-spoke wheels. Those haven't looked good on a car since Saab managed to pull it off.

RIDES put together a second Soul, which focuses on the greats of music over the years. It's a rolling museum of memorabilia. Items inside the Soul include a guitar signed by Slash, a 50-cent signed G-Unit sneaker, one of Jimi Hendrix's gold albums, and a microphone signed by John Legend. Our favorite part? The 20-inch HRE 935 wheels finished in a gold satin color and plucked from the wheelmaker's oh-so-excellent vintage series.

Finally, Kia turned to NBC's The Voice as a source of inspiration of its final Soul. It carries the shows logo and color scheme on the outside of the car, while the inside boasts a rear-mounted 40-inch LED TV connected to an iPad mini. This setup is fitted with The Voice app, which comes with preloaded songs. You can then sing through the wireless microphone and the sound will carry through the Rockford Fosgate speakers.

It's clear that Kia loves music, and this round of SEMA Soul machines proves that. Some look pretty good, some are alright, but they all sound great.