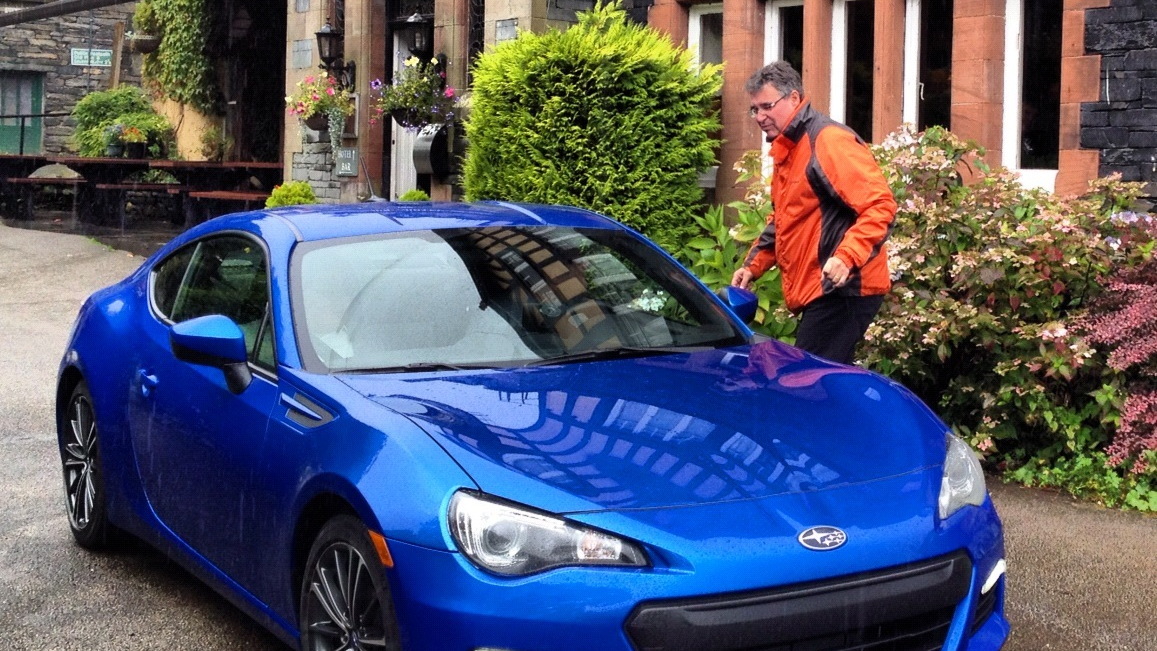 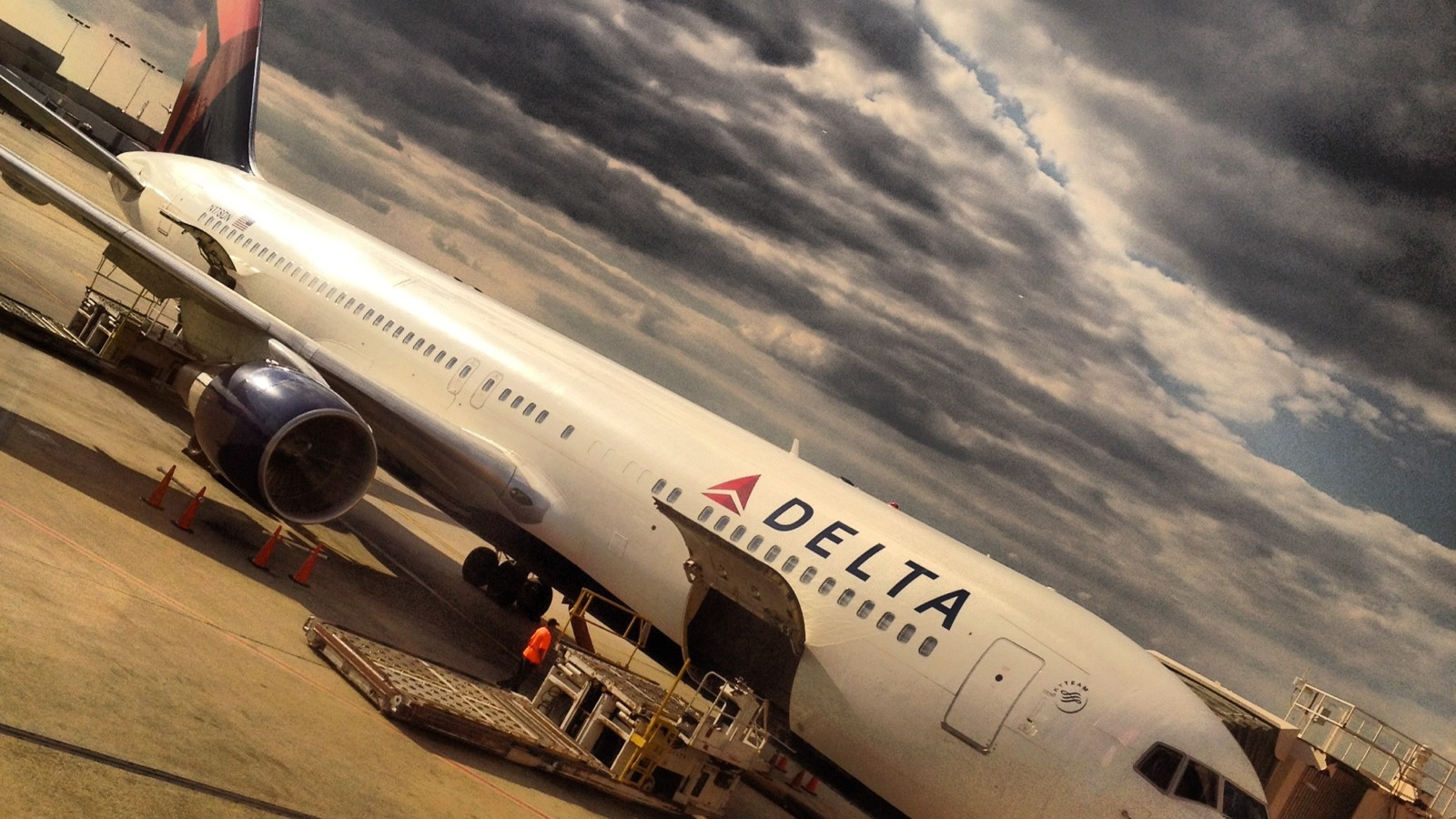 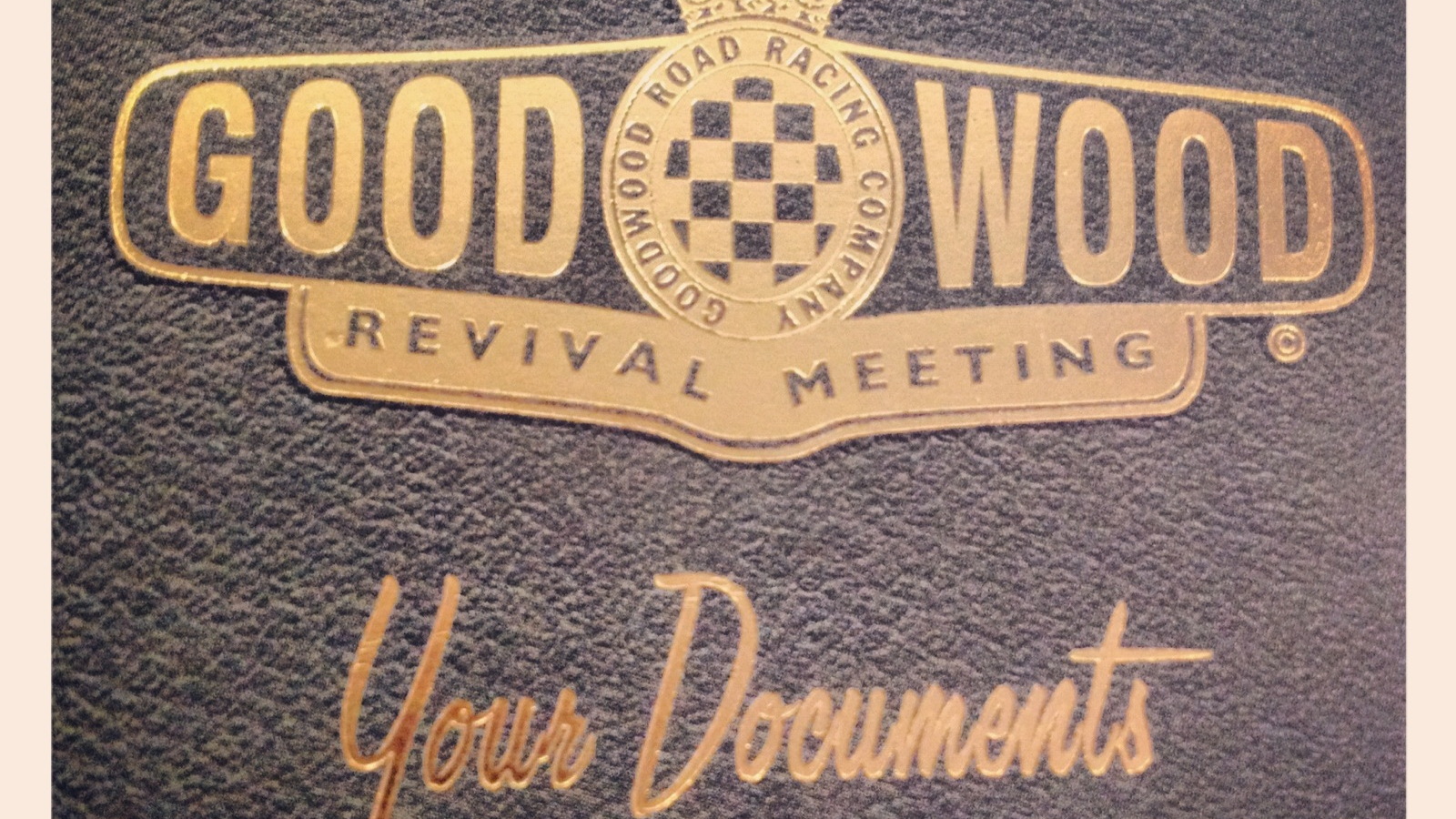 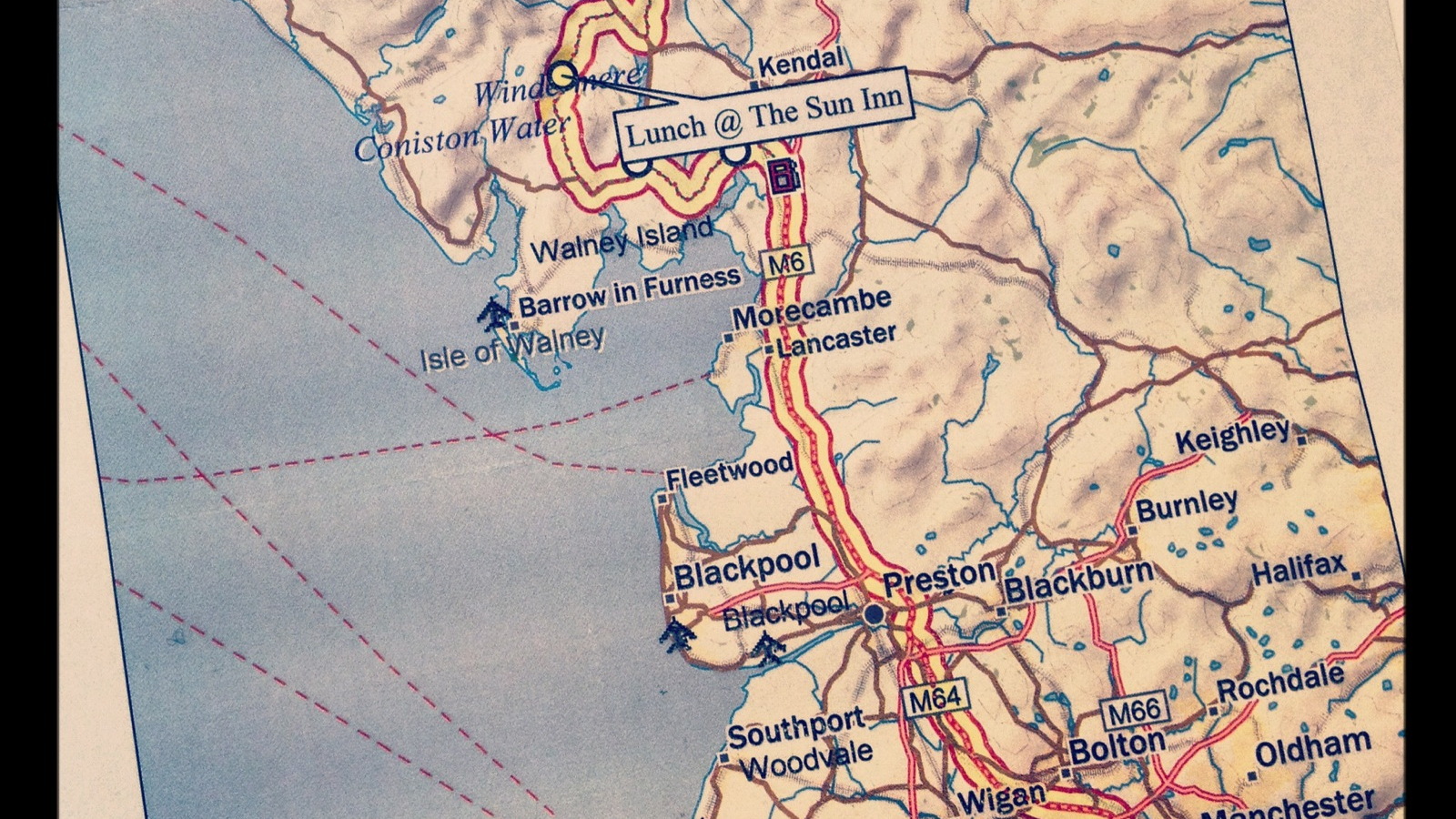 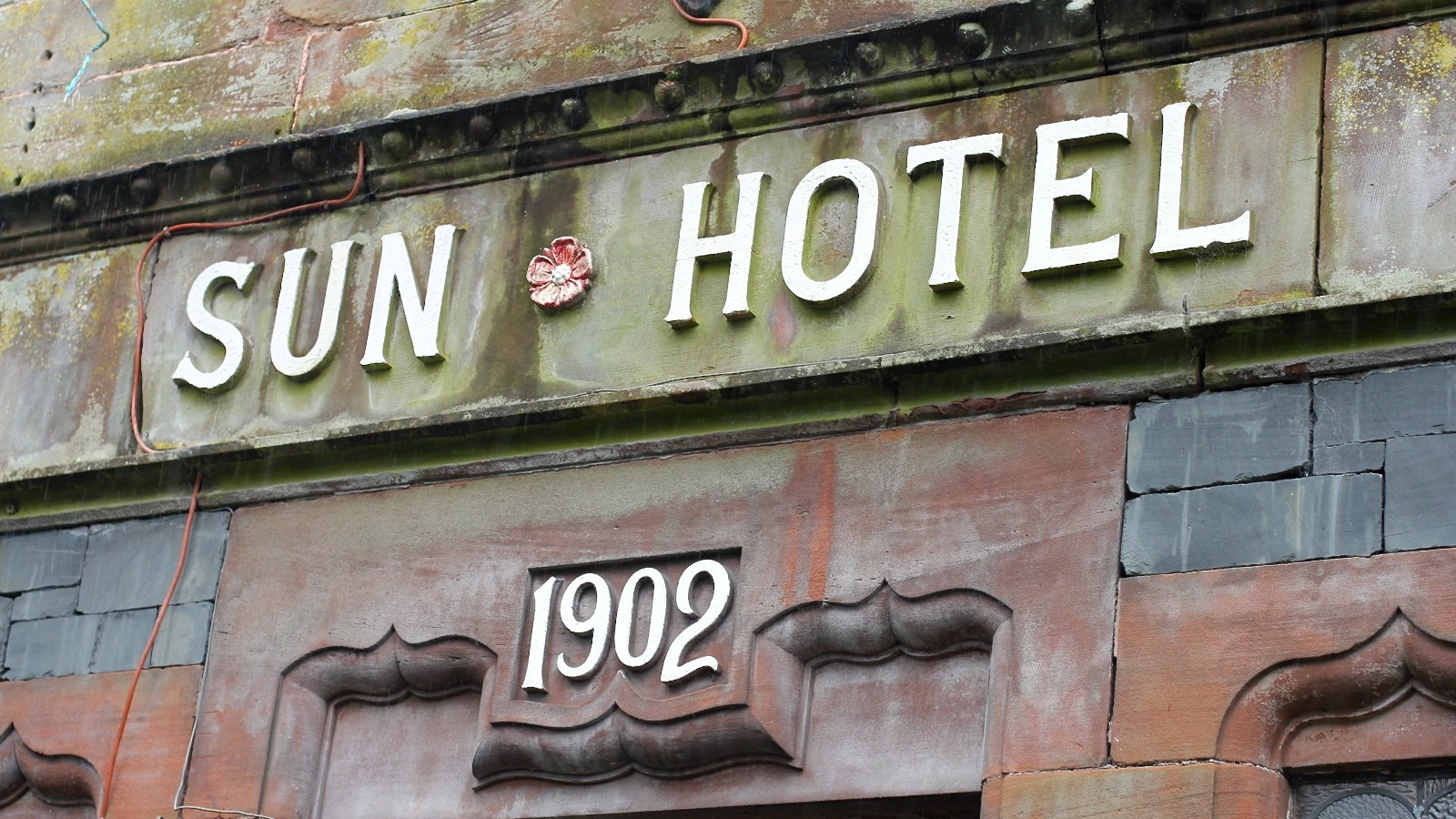 The problem with driving a left-hand-drive car on the left side of the road--not the right--is that it becomes second nature too quickly, too easily.

Five miles out of the Manchester airport, only a couple of U-turns and traffic circles missed, the 2013 Subaru BRZ I'm about to flog up and down the southern two-thirds of the biggest British Isle has become compliant. Or maybe I have. At least, both halves of my brain are working together.

Merging into those traffic circles isn't so easy, you know. Looking over my right shoulder gets me a bearded guy obsessing on his wardrobe for the weekend's retro-hued Goodwood Revival. But still, all told, I'm in relative awe at my ability to blot out jet lag, the memory of just climbing out of a Dodge Dart hours before from the other side of the road--the other side of the ocean--and to blot out some horrible Graham Norton radio program while I should be passing several dozen bricks, just trying to keep this car in the proper lane.

What's the point of all this? I'm about to spend the next two full days drilling this BRZ north and south around England, with a co-driver that hasn't learned to drive stick. It'll be me alone in a back-to-basics sports car that's more akin to my old 1990 Miata than anything I've driven since--and a virtual twin to the Scion FR-S that left my driveway a few weeks back.

As luck would have it, the BRZ's the right kind of car for these left-brained roads--bare lane-and-a-half threads where precision's more important than raw speed. The BRZ takes aim, and has my attention.

You can wear something simple and get away with it at the Goodwood Revival, a self-proclaimed time capsule broken open each year to celebrate the postwar, pre-psychedelia heights of racing at the old Goodwood course. Tribal tattoos and tank tops are enough for handfuls of the day trippers, but for the equivalent of Disney backstage passes--our "mess hall" tickets, little octagonal badges looped around shirt buttons or boutonnieres--the full Goodwood regalia is de riguer. According to the tag, "jacket and tie are required for gentlemen." Broad assumptions made, check.

The perfect Goodwood ensemble requires a hat. Blazer and argyle in hand, I started the search for that hat back at home, without any luck. EBay, you are no friend to 7 1/2-size heads. Trilby hats, you either. Choices winnowed down to a fedora with a small brim -- the shape's good, the fit's right, it's just so--I banked on better luck in England.

Finding a good fit in the BRZ was much easier, at least in front. With bucket seats a little deeper than the ones I remember from my Miata, it took maybe two minutes to find a two-day seating position, one in perfect reach of the snicky shift lever, one where it'd be easy to modulate the longer clutch uptake. Like the Miata, the BRZ's four-cylinder's always present and accounted for--only here it's a 200-horsepower flat four, with its own hammertone vibrato that we choose instead of dire English radio as we take a course for the Sun Hotel, a quick lunch, and a path due north into the English Lake District.

Subaru's sports car comes together as the road unfurls between stone walls and grassy berms. And sheep. Ever wonder why lamb's so popular here? Just on the road north into Cumberland, within spitting range of Scotland (we suggest no spitting--they're testy), we could barely keep count without....dreaming.... Or of the lamb served nightly at dinner, or daily at lunch. There's an inverse theory at work here. A feast for the glutton, not so much for the mutton.

Where were we again? The Subaru. The steering talks back through your fingertips, winding up without lingering. The fluid rear-drive feel of that little Mazda's in there, upsized in scale a little--room inside for a helmet, we're promised for tomorrow. Or for a hat, if I could find one at any of the firmly closed shops along the way.

It's also growing on my eyes. Not the sheep--not that lonely. Not yet. If it weren't for the Subaru stars on the sheetmetal, you might even mistake it for that other brand's car--or for something slightly more exotic, with its pert rear and sculpted door divots.

It's less of a striking contrast than I'd pictured, as we pulled into Armathwaite Hall, a "cottage" dating back as far as the 11th century, now overtly billing itself as a wedding factory. It's a handsome pile of stone with a warm wooden parlor, a well-stocked bar, and a cool snap in the air before the next dawn that made for some numb hands during what passes for a "sunrise" photo session in the early fall in these latitudes.

The italics are theirs. The speed was mostly the Subaru's, with some help, and without some of the stability control, dialed down with a tap on the console button.

From Armathwaite, our clutch of BRZs--three blue, one white, and a chase Audi or two--took off for a full day of country roads, and some of the more spectacular corners of England, not quite barreling from the Lake District to the Yorkshire Dales, making exactly a beeline for Harewood Hall. A beeline being the most circuitous route between two points, we looped around several hatless small towns at a pace that felt like we were destroying land-speed records with steely gazes alone.

But it was all optics, all the psychology of densely wooded paths and winding, wet pavement lined with rocks just inches away from the BRZ's mirrors. We must be going 70 mph, 80 mph? No, just barely under 40 mph, the legal limit in this shire, sire.

That explained our late arrival, just 15 minutes left under the time limit, before lunch was ended at Harewood House, a magnificent heap owned by the Duke of Devonshire, built (the house, not the Duke) in the 1700s on sugar money. The house, one of many houses of the Duke's, puts the vast fortunes still in place in the aristocracy in Great Britain in proper scale. Even so, the nut required to maintain these estates means many have been turned over to the National Trust, while others have opened in part or in all to the public.

Harewood House is in the halfway camp--parking lots are tucked away discreetly behind a hedge, with the stately visage of the house left unbroken, its gardens host to daily tours, most of its rooms cordoned off along with untold art treasures.

It's all fabulous, to a point. In our crowd, the real attraction lies across the street, in some fallow fields, at a local venue dubbed the Harewood speed Hillclimb. In retrospect, it's the best way we can think of to tour the Dales in compact, concise form--with all the sheep edited out.

Instead, you get laconic corner workers who set minute lap times in their own Formula Fords, and imminent threats of rain, while you learn this technical little course. The record's barely 50 seconds, but some cars just aren't suited to the deep esses or the gradual ascent through a very tight 90-degree right-hander; even a Nissan GT-R's too fat, we're told.

The BRZ adapts well, though more torque wouldn't hurt its case at all. It's at home in an autocross environment, and once you tap the stability control into sport mode, there's enough throttle-steer available to cure the brief bouts of understeer. It's all about momentum, you realize, through the most difficult stretch preceding that big right-hander; I try it three different ways before settling on a ham-fisted, first-gear downshift as one way to get through it with some speed, if somewhat less dignity.

Maybe it'd be different if I had that 50-second, record-setting lapper--or something like a 700-horsepower Subaru WRX, another Hillclimb favorite. But then, those stone barns that narrow the track to just 12 feet apart at one pass might seem a little too close for comfort.

Hills climbed, tires abraded, we pulled in not long before dark at the Devonshire Arms, a former military barracks turned tea hotel, next door to the ruins of Bolton Abbey--one of the churches destroyed by Henry VIII in a fit of political pique. I'm mildly surprised by two things: the Anglican-American Subaru PR man has made no connection between the state of the abbey and the state of his cars, and that the dainty yellow sewing bench in my dainty little room has the fortitude to hold me up through a few hours of video editing and occasional narcolepsy. The jet lag hurts by now.

The long M1 to Brighton

Good things come to an end, usually not quite as industrial or grim as the drizzly cloverleaf outside Sheffield, where we decided after just a couple of hours to leave behind the slow pace of those country roads. It was time to make time, and to make a direct route south for the English Channel, stopping for a quick fish and chips at a converted gas station right before entering the motorway.

We were headed for Brighton, not exactly the final destination, but close enough to Goodwood and home to a generally wider selection of pubs. Brighton's a coastal resort, alternately happening and shabby, and this weekend in the midst of a chili festival. Street vendors with vintage clothes by the rackful must have been anticipating good Goodwood crowds, or maybe a bedbug-like hipster infestation. We drove by slowly--I still didn't have a hat and the racks were tempting, but not as much as our cars were tempting the locals. Apparently, only about 1,000 BRZs are allotted to Subaru UK for the launch year, and seeing one live is a game of Concentration, with sidewalk crowds trying to match the shape with the brand.

We give them ample opportunity, since we miss the hotel parking garage three or four times and make the scene work to our advantage. We're not alone though--the Goodwood crowd is already descending on Brighton, although it's a good 30 minutes to the southeast of the festival.

That is, if you time it correctly. Leave Brighton at, say, 8 o'clock in the hope of entering the Revival by 9, and you're dreaming. Some three hours and a minimum of four stranded British cars later (it's still unclear if they measure time or distance), we finally make our way onto one more ducal estate, this time the Duke of Richmond's grounds, next door to the global headquarters of Rolls-Royce, and now the home of the Revival--as well as the Goodwood Festival of Speed and other heavily sponsored opportunities that have kept the estate in ducal hands.

We leave the BRZs parked neatly in a row, to be collected later, and dive into the Goodwood Revival a mostly natty bunch, outfits spanning the decades from early 1940s to the very end of the Goodwood era. Specifically, 1966. More specifically, April 4, I think. It all comes down to the pinstriping.

All except for me of course. I wandered into and around the Revival with just the argyle looking period-appropriate--unless you count a little windburn and some eau de leaded gasoline around the neck and ears.

I never did find the perfect hat. But in a quintessentially quirky, perfectly British moment of zen, I wondered whether the hat had found me.