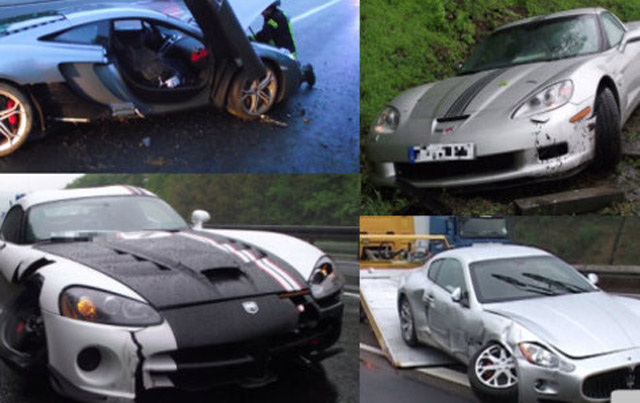 Three supercars managed to crash on the same stretch of the A7 autobahn in the region of Kirchheim, near Germany’s center.

The cars included a Chevrolet Corvette, a Dodge Viper ACR and the most severely damaged of the lot, a McLaren MP4-12C.

The carnage all took place within a period of two days and is believed to have been caused by a combination of high speed and wet weather.

If that wasn’t enough, a Maserati GranTurismo also crashed on the same stretch of road during the past week.

The first to go was the silver GranTurismo, which crashed on Wednesday and whose driver is believed to have owned the car for only a few hours. The second crash involved the McLaren MP4-12C supercar and took place on Friday. The driver of the McLaren was just 27 years old so may have been inexperienced, but as we’ve also seen in the past the MP4-12C may just be a little too hot to handle.

The next day saw two more cars crash within hours and just a handful of feet from the site of the previous two crashes. The first was a Dodge Viper ACR, whose driver had rented it for the weekend and had only been in possession of the 612-horsepower brute for three hours. A few hours later on the same Saturday and on the same stretch of road a Chevrolet Corvette also crashed.

Fortunately, no one was seriously injured from the four separate crashes. The McLaren MP4-12C is a confirmed write-off and there’s a chance the Maserati could be too.

Head over to Hersfelder Zeitung to see more images of the wrecked cars.