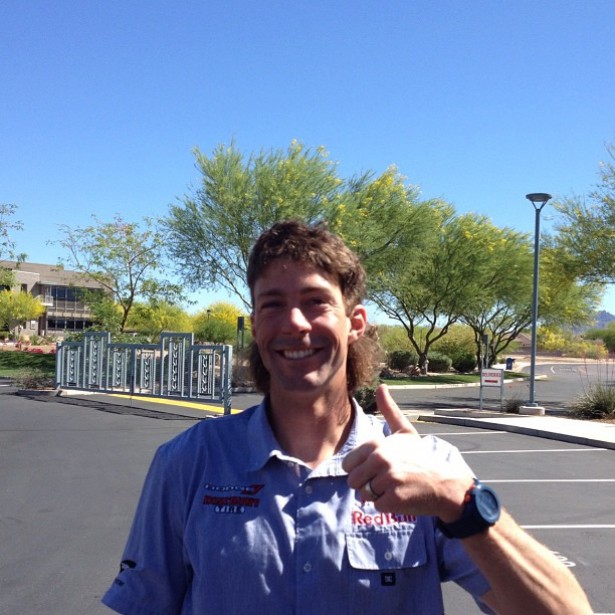 Travis Pastrana wearing a mullet given by Jimmie Johnson

So Richard Hammond and Jimmie Johnson hopped on a NASCAR conference call that was quickly sidetracked into the minutia of NASCAR racing and politics. But from the mists emerged a few choice nuggets of wider appeal. Among them was Travis Pastrana's new mullet.

Given to Pastrana by Jimmie Johnson with a pair of metal shears, the mullet is described on Twitter as a "full waterfall." The image certainly fits the description. Why did Johnson give Pastrana the mullet? That's to be revealed tomorrow, apparently.

On other topics, Hammond espoused his undying love for the hospitality and access of NASCAR, proclaiming that no other motorsport at NASCAR's level would grant in-the-pits access during the races so easily, though we think that's in part due to Hammond's role at Top Gear UK and his new show Crash Course and the upcoming episode on the sport. Still, it's a good sentiment to hear coming from the likes of a churlish Brit. Describing the experience of driving a Cup car, Hammond called it "staggering," and made comparisons to flying his personal helicopter.

Hammond also revealed that his co-hosts Jeremy Clarkson and James May think "exercise makes you stupid," and that their deep-seated dislike of NASCAR is born of a cultural bias rather than any rational reasoning process. In other words, it's just like the Top Gear TV show. Finally, Hammond said he'd like to get some face time on Top Gear USA--though there doesn't appear to be any such plan in the works at the moment.

Otherwise, Johnson displayed his well-polished skill of answering questions about the politics of caution flags, other drivers' opinions of his skill, and even asphalt aggregate choices, with diplomatic aplomb. If Johnson ever gets tired of driving race cars, he'll have a promising career in public relations.

To see more of Hammond's impressions of NASCAR, plus what we're sure is going to be some great behind-the-scenes footage of a NASCAR event in full swing, watch the Top Gear episode next week on BBC America, Monday, April 30 at 8:30 p.m. Eastern and Pacific.