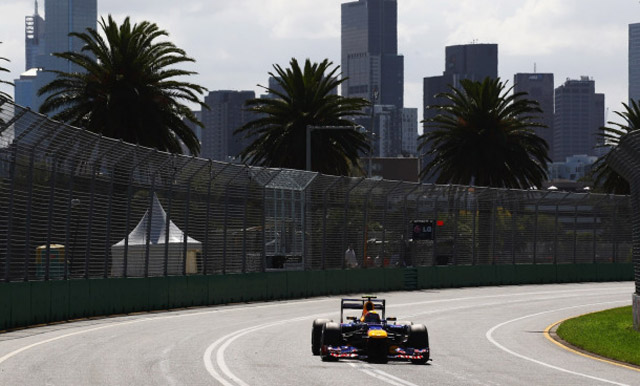 Tomorrow is the Australian Grand Prix, the first event on the 2012 Formula 1 calendar, and once again it is being held at Albert Park Raceway in Melbourne.

The city’s geographical location between the sea and hills to the hinterland can cause several changes of weather throughout the day.

We saw this on Friday during practice, with brief but heavy downpours compromising part of the session. And the weather outlook for tomorrow’s race is far from ideal.

It’s currently a chilly 52 degrees F (11 degrees C) in Melbourne but peak temperatures during race time should hit 81 degrees F (27 degrees C). There’s barely any wind but humidity is up and the skies are predicted to remain overcast.

The track itself is used as a public access road throughout the year, meaning the surface usually has lower grip than a dedicated track. The surface is also highly abrasive, which causes high tire wear during races.

Behind them will be Lotus-Renault’s Romain Grosjean and Mercedes AMG’s Michael Schumacher in third and fourth positions, respectively. Reigning world champion Sebastian Vettel, meanwhile, will be starting at sixth on the grid.

Enjoy tomorrow’s race, and look out for our full race results coverage on Monday.