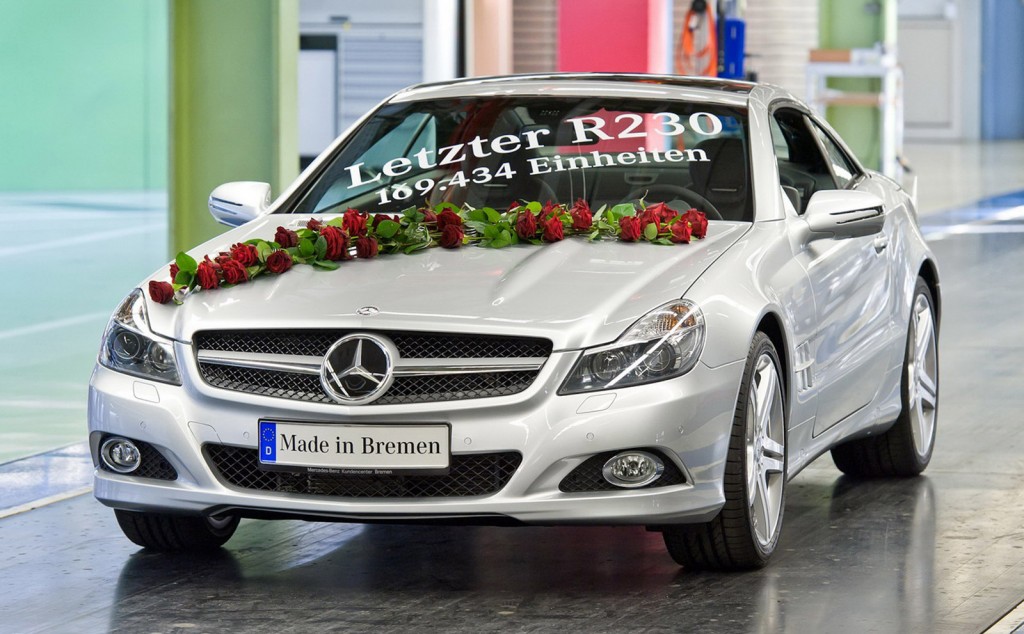 The new 2013 Mercedes-Benz SL-Class is just around the corner so that means production of the current-generation, the R230, has to come to an end.

That end happened last week when the very last R230 SL-Class, build number 169,434, rolled off the car’s production line at Mercedes' plant in Bremen, Germany. Mercedes-Benz is also quick to point out that since the production of the first SL-Class in 1989, more than 370,000 of the luxury convertibles have been built at the Bremen plant.

The very last R230 model was a European-spec SL 350 finished in Iridium Silver. The car is now scheduled to go on display at the Mercedes-Benz Museum in Stuttgart where it will sit alongside the rest of the automaker’s 'Sport Leicht' range of roadsters, some of which date back 60 years.

First unveiled in 2001 in SL 500 trim, the R230 SL-Class went on to spawn several different variations including the high-performance SL 55 and SL 65 AMG models, which later were upgraded to SL 63 and SL 65 trim. Of course, who could also forget the all-out-insane SL 65 AMG Black Series.

During its lifetime the car underwent two facelifts, the most recent of which saw the transition from the circular shaped headlights of the original to the squarer shaped design seen on the current model. The SL-Class has also played the role as Official Safety Car in a number of Formula 1 races, and to this day remains one of the best looking convertibles with a folding hard-top roof.

The next-generation of the car, the R231, is scheduled to make its world debut next month at the 2012 Detroit Auto Show. In the meantime, read up on the details we have so far by clicking here.

Thanks M for sending in the tip!