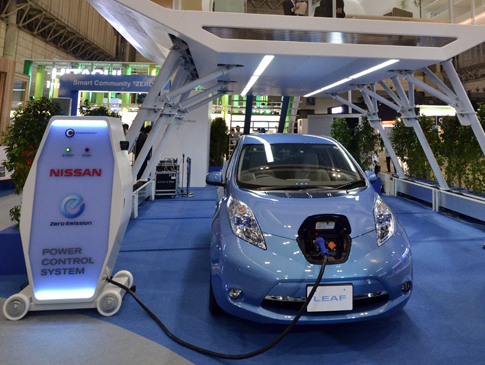 There are at least three obstacles standing between electric cars and mainstream drivers: range-anxiety, battery recharge times, and the fledgling charging infrastructure. The good news is, Nissan may be well on its way to eliminating one of the three.

Working in partnership with Japan's Kansai University, Nissan has developed a new, high-speed charger that can top off the battery of a Nissan Leaf in about ten minutes. While that's still longer than it takes to fill a combustion-engined vehicle with gasoline, it's vastly better than today's average charge times, which clock in around four hours with the fastest commercially available charger.

Even better: Nissan feels confident that it can achieve a three-minute charge in the near future. (Note: Japan's JFE Manufacturing claimed to have hit the three-minute mark last year.) That would put electric cars on par with their gas-powered siblings and could help tip the scales in favor of electric vehicle adoption.

Unfortunately, Nissan's high-speed charger won't hit the market anytime soon. At present, it appears that we'll have to wait around a decade for ten-minute chargers to be available to consumers -- and expect it to take a while longer for those devices to roll out in ample quantities to create any form of charging infrastructure.

On the upside, that gives Nissan and other electric car manufacturers plenty of time to address another obstacle faced by electric cars: range-anxiety. Solid-state batteries, anyone?

For more on this development, check Nikki Gordon-Bloomfield's article on Green Car Reports.