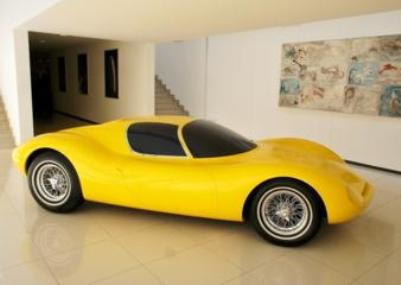 As legend has it, a brazen, determined tractor builder named Ferruccio Lamborghini once called upon Enzo himself to discuss a clutch problem with his Ferrari. Enzo dismissed him outright, indicating that he should stick to driving tractors. Lamborghini left determined to show exactly what he knew about building supercars. The wealthy businessman had developed quite a habit for driving them, so with new-found determination, it was time to build one.

And thus began the transformation of the Lamborghini name, from tractor manufacturer to designer of some of the most beautiful, sought-after supercars in the world. Lamborghini had the funding to pour into a state-of-the-art facility at Sant'Agata Bolognese, but designing a car to rival the greatest of the world proved a big stretch from designing utilitarian tractors.

For the V-12 engine, Lamborghini turned to Giotto Bizzarrini who had designed contemporary Ferrari engines. And for the exterior, Italy's design house infrastructure was teeming with excitement for the new supercar project. Names like Bertone, Pininfarina, Ghia, Vignale and Michelotti lined up in hopes of getting in on the project.

Eventually, Lamborghini went with a design by freelancer Franco Scaglione, and the 350 GTV prototype and Raging Bull itself were born. The car debuted at the 1963 Turin Auto Show and went on sale the following year as the 350 GT. And thus, the Automobili Lamborghini S.p.A. saga began.

But there were multiple tales that were never told, twists and turns that remained dark and unexplored. The flurry of pre-prototype Lamborghini designs all held within them the story of a different Lamborghini. Would the Raging Bull have become the global icon had it gone with one of those others? Would it have flopped out of the gate and never have become a household name?

Most of these designs never made it beyond the initial stages, and certainly never made it to the public eye. But on a recent trip to Giugiaro Design, Car Design News spotted the bright-yellow model pictured above.

As the story goes, the tangible model was actually created long after Lamborghini had gone with Scaglione's design. Fabrizio Giugiaro found his father Giorgetto Giugiaro's sketches from his time at Bertone, digitized one of the images and created a model of it. He gave it to his father for his 70th birthday in 2008, and the model remained out of the public spotlight until CDN spotted it at the headquarters.

The car is a look at what could have been the very first Lamborghini had Ferruccio chosen Bertone's direction. Though the car's curves are a little drastic, and its front a bit limp, the car has a bold playfulness that isn't present in the 350 GTV. The front-end could use some work, but the rear emanates a sense of power and speed more effectively than the 350 GTV.

Of course, the production 350 GT got redesigned by Carrozzeria Touring, so who knows how the Giugiaro might have changed from its rough form. And who knows how such a drastically different design would have changed the course of Lamborghini--and automotive--history forever. We'll never know just what the Raging Bull would look like today had it gone the direction of this curvy, bright-yellow design, but it's fun to wonder.

Be sure to check out Car Design News' piece for more back story and plenty of additional photos. Then feel free to sound off on whether Lambo would be better or worse off today had this design been its first.