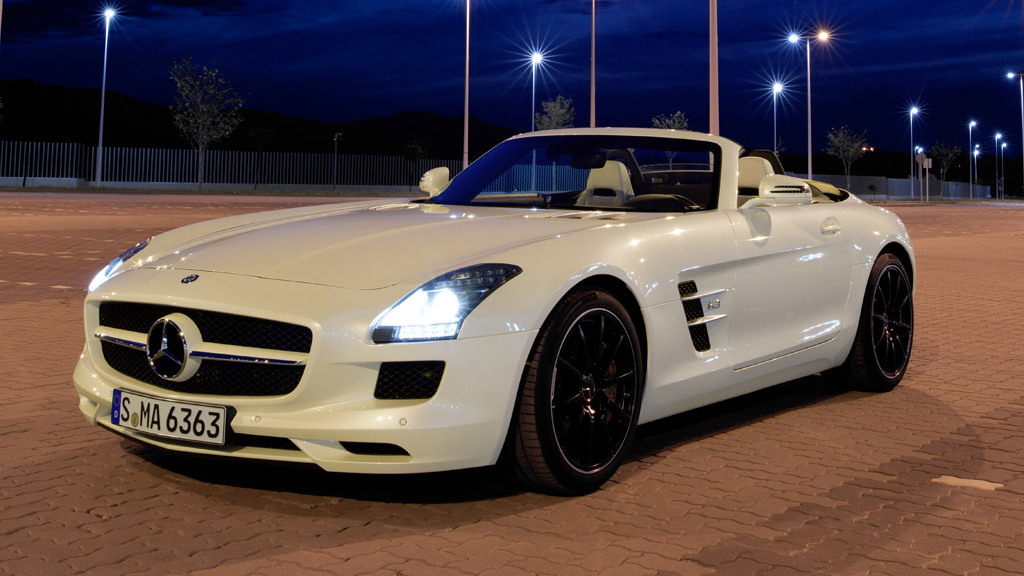 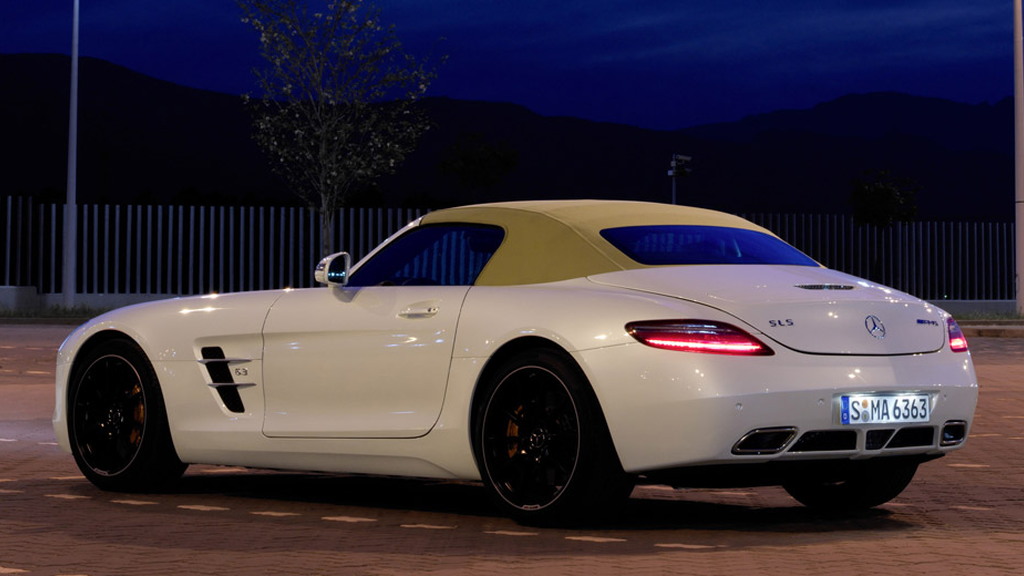 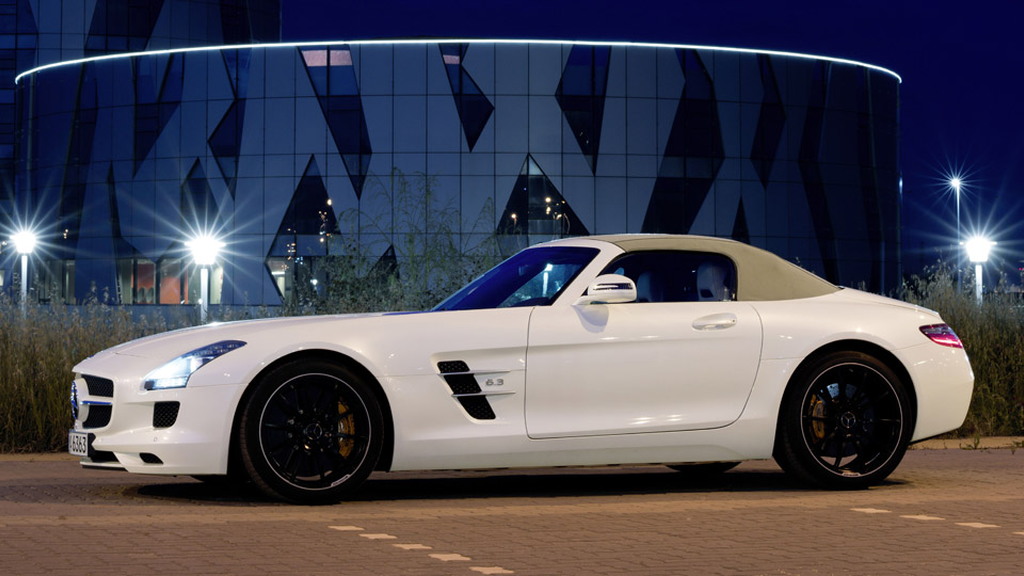 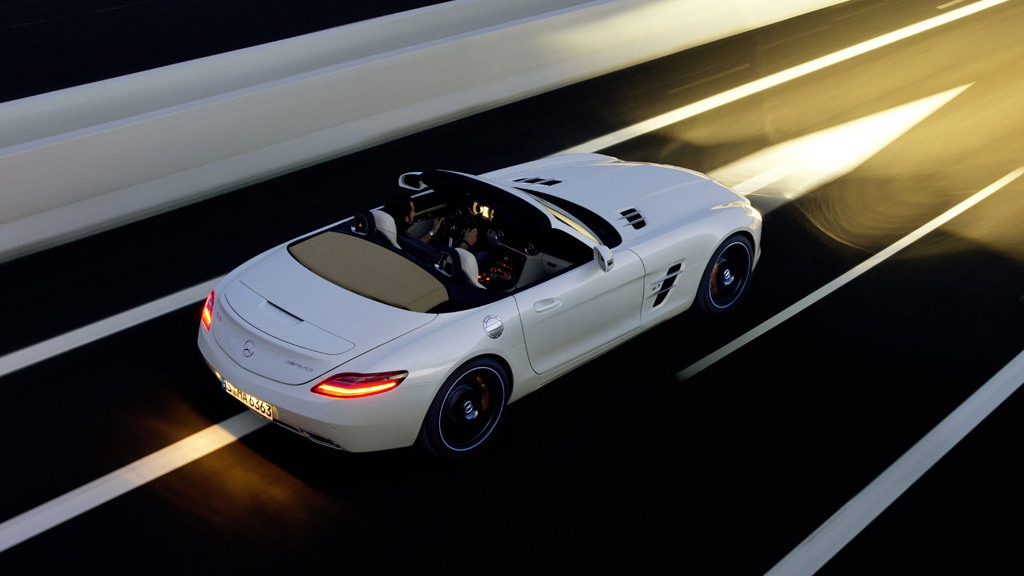 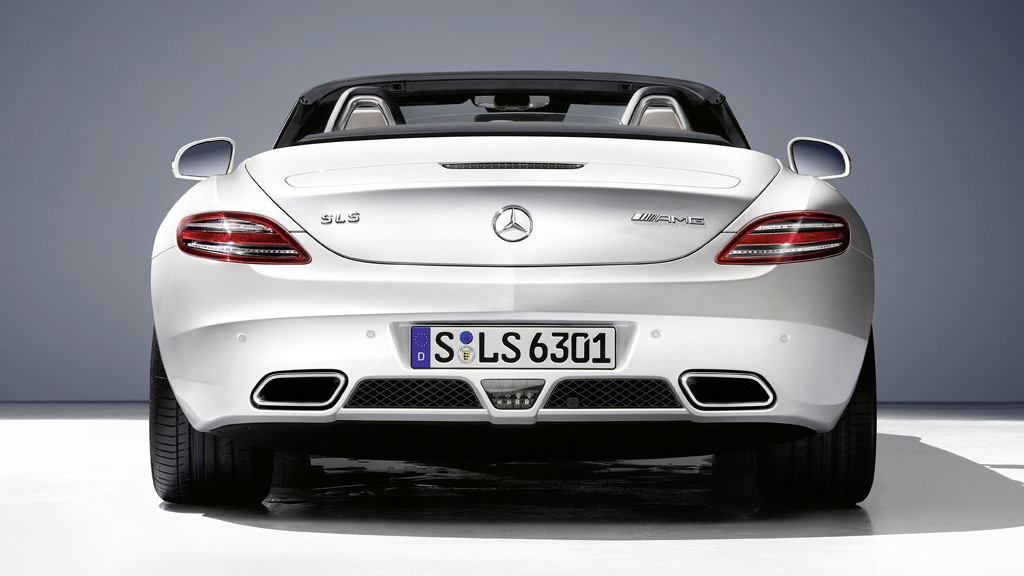 It’s not set for an official world debut until September’s 2011 Frankfurt Auto Show but the convertible version of the latest Mercedes-Benz gullwing supercar, the brand new 2012 Mercedes-Benz SLS AMG Roadster, has been revealed in full for the first time.

The car has been one of the worst kept secrets of the year, perhaps purposely so, as we’ve not only seen barely disguised prototypes but also leaked patent drawings and even a Super Bowl ad appearance. However, there are still plenty of details that we can finally confirm today.

Also available as an option is a new Adaptive AMG Sport Suspension with electronically controlled damping. This enables the damping characteristics to be modified at the touch of a button, with different settings ranging from ‘Comfort’ to ‘Sport’ to ‘Sport plus’.

The new features don’t end there as the car’s designers have also fitted what they call the AMG Performance Media kit. This is a racing-inspired system that combines numerous telemetric displays positioned in the center of the dash, such as engine data, lateral and linear acceleration and lap times on a racetrack. It’s activated by pressing a specially marked ‘AMG’ button and operated using the COMAND interface.

Some of the handy data points include real-time display of engine output, torque and accelerator position, individual tire pressures, 0-60 mph and quarter-mile times, and finally, actual lap times for any race track, the lengths of which can be loaded using sector times and a memory function.

Most of these features are controlled with the AMG DRIVE UNIT, a carbon fiber encased control module located in the center console. Other AMG touches include a sports steering wheel with leather trim and a flat-bottom design and solid metal paddle shifters for the dual clutch transmission.

The compact fabric soft top of the SLS AMG Roadster, available in black, red or beige, opens and closes in just eleven seconds, and can be operated on the move at speeds up to 31 mph. The trunk capacity is 6.1 cubic feet with the roof either open or closed, and therefore roughly equal to that of the gullwing coupe (6.2 cubic feet).

In order to achieve handling dynamics identical to the gullwing model--without a fixed roof--the Roadster has two features designed to increase the rigidity of the bodyshell: the cross-member carrying the dashboard has additional supporting struts at the windshield frame and at the center tunnel, and a structure between the soft top and the tank stiffens the rear axle.

These features prevent unwanted vibrations from the start and dispose of additional weight-increasing vibration dampers often employed by competitors. Because of this rigidity, the soft top can be reliably opened and closed electrohydraulically at speeds of up to 31 mph. Top speed is an electronically limited 197 mph, which is safe to travel at with the top either up or down. Interestingly, the 0-60 mph time is a claimed 3.7 seconds--0.1 seconds faster than the official SLS AMG gullwing coupe’s 3.8 seconds time.

Finally, the bodyshell of the Roadster tips the scales at only 536 pounds--which is comparable to the 531 pounds of the SLS AMG gullwing coupe. This results in a total curb weight of 3,661 pounds for the Roadster, making it just 88 pounds heavier than the hard-top.

The new 2012 Mercedes-Benz SLS AMG Roadster is set to go on sale in the U.S. this fall. In the meantime, click here to read our first drive of its gullwing sibling.