We know it's officially convertible season and all, but while the tagline for this particularly rank Toyota Celica says "Sunchaser," we suggest you run away instead, quickly, in the opposite direction.

The Sunchaser was an aftermarket conversion of the second-generation Celica--carved out of the bug-shaped hatchback model that preceded one of the best Celicas ever, the wedgy third-gen model. This one wasn't built by Toyota, but the automaker sold it through its dealers, so it's culpable.

The worst part of this slow-moving flop has to be the roll hoop. Even the Nissan Murano CrossCabriolet knew not to tread on the waters that killed sharp-looking sportscars for all of us, in the vain attempt to turn them into roadsters. We could remind you of the Nissan 300ZX convertible, or the Chrysler PT Cruiser convertible, or even the Olds Cutlass Supreme convertible and its oddball beer-tap door handles--but it's lunchtime for some of you, on some time zone. It doesn't work any better on econoboxes.

This example's actually pretty clean, and in the bizarro Wayne's-World collector ethos, probably worth its asking price for the tasty stripe package alone. It's the base car under this pristine example that's so offensive to our finer senses: even if only 3000 examples were made, every owner of every example has to put up with that hoop casting a shadow on the cabin and on his or her reputation...all to drive a draftier, wobblier version of probably the least sexy Celica of all time.

It doesn't matter if this one's a head-turner--you'd have to be Ted Turner to be batshit crazy enough to really want this, even on looks alone.

The harsh verdict: So ugly even Wendy Williams wouldn't talk to it. 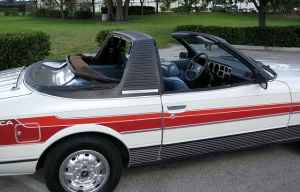