Electric car maker Tesla is suing U.K. hit TV show TopGear for libel and malicious falsehood, seeking to right the record about its Roadster electric sports car, which the company thinks was treated unfairly by the sometimes witty, sometimes boorish hosts of the show. Unfortunately, this is no David & Goliath story, and there is no clear moral high ground. Both sides are only half right.

Wait a minute, you say, TopGear clearly presented a scripted, untrue version of the Tesla Roadster's performance on its show! That's certainly true. But it's only half of the story.

TopGear is, first and foremost, the world's most-watched TV show about cars. It's fun, entertaining, and occasionally informative. It's not Consumer Reports. It's certainly not a news show. It's not even The Daily Show. Does that excuse a script that explicitly shows off the worst that could happen with the Tesla Roadster? No. Not entirely, anyway.

Without delving too deeply into the nether-world of meta-criticism of modern automotive journalism, TopGear's supercar antics, half-hearted mainstream car reviews, and ridiculously constructed contests are as far removed from the consumer-oriented takes of outlets like Edmunds, TheCarConnection, or Cars.com as politically-themed radio talk shows are from a Presidential debate.

Tesla would certainly have you--and the British courts--believe otherwise, but anyone familiar enough with the show to have seen the segment at issue knows better.

The crux of Tesla's argument

Tesla points out some of the parts of the December, 2008 episode of TopGear concerning the Roadster in its complaint before a U.K. court. Some of the bits it sees as the more egregiously malicious and libelous include: 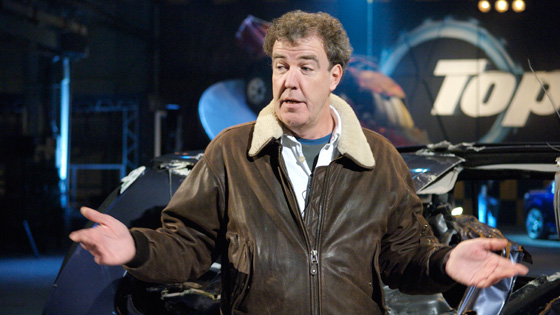 These are, almost without exception, uttered by the tall, wobbly-headed, and openly biased Jeremy Clarkson. He has made a career out of hyperbole, outrageous comparisons, and general hooliganism behind the wheel and in front of the camera. He's more Stephen Colbert than Walter Cronkite.

Tesla, on the other hand, is a fledgling company in a notoriously difficult business for startups, pushing a futuristic product on a market than can barely justify--let alone afford--it. That product is, for the time being, the best of its kind. It's also a very different animal from the combustion-powered cars it competes with in the eyes of enthusiasts looking to spend $100,000 or more on a two-seater. Tesla has spent a great deal of time and effort establishing that fact.

The other half of the story

So, then, is it so wrong that Clarkson and company went out of their way to highlight the differences Tesla's less keen on displaying? Is it unreasonable to point out that while the Roadster is a fast, competent car on track, using it as such will result in reduced range (which is true), possible overheating of the drivetrain (not denied, but rather side-stepped in Tesla's complaint), and, eventually, a depleted battery which will take some number of hours to replenish (also true, even with the high-current charger), or that, from Clarkson's perspective, the combination of these factors is less attractive than a combustion-powered car? Not at all. All of these could happen, and all would be a very different situation from the same occurrences in a conventional car.

A gasoline-powered equivalent, say, the Lotus Elise, would handle the track-day task with ease, building on over a century of experience in working out the kinks. Once run empty from a day at the track, a refill would take no more than a handful of minutes. Range is reduced in a combustion car as well--on-track mileage is often a very small fraction of what the same car gets on the road--but with a quick and easy fix at the pump. Is it unfair to make this comparison, even if by dramatization?

In my eyes, not at all: you must consider the source as much as the content these days. You don't go to Gawker or TMZ for the unvarnished, impartial, fact-checked truth and you don't go to TopGear for the nuts-and-bolts, clipboards-and-stopwatches hard data on cars (though you might have, once upon a time). News and entertainment are one and the same these days. Need an example? Flip on Fox or CNN.

Tesla does appear to have a point with regard to Clarkson's claims that the Roadster's "brakes had broken," which in reality was a blown fuse. Clarkson, on the other hand, was not concerned with the semantics of the matter, telling the Telegraph, "Nobody gives a flying **** how the brakes failed. Whether it was a blown fuse or not, they were still not working."

So now that we've trod both sides of the issue, what's left? What's the score?

Tesla, a small, as yet unprofitable EV startup that has sold a touch under 2,000 cars since production began in 2008, got what it feels is a raw deal from an influential TV giant. TopGear, with a viewership estimated at over 350 million globally, took a snark-heavy and truth-light look at a car that represents for many of its fans the end of proper motoring.

Did TopGear's take on the Tesla hurt its chances at success? Apparently not in financial terms--Tesla is seeking "not more than £100,000" in damages for the episode--about the price of a Tesla Roadster in the U.K., plus an injunction to prevent future re-broadcasts. Apparently not in the eyes of the U.S. government, either, which saw fit to invest a $465 million loan in the company last year for the construction of plants to build its future cars. Perhaps most importantly, apparently not even to Tesla itself: CEO Elon Musk said in an official press release just three days ago, "The Roadster has proven to the world that electric cars can be incredibly fun, and practical. Most importantly, these vehicles have provided Tesla with a real-world test fleet that allows us to stay on the cutting edge of electric powertrain engineering and technology."

If that's really the case, why all the fuss over a few minutes of British TV footage from two-and-a-half years ago? Why, especially, when the suit reminds us all of the content of that footage? Perhaps Tesla has learned the truth--and is taking advantage--of the age-old advertising adage, "There's no such thing as bad publicity." Perhaps especially when you compare the cost of drafting a complaint to buying time on the world's print, web, and TV outlets.