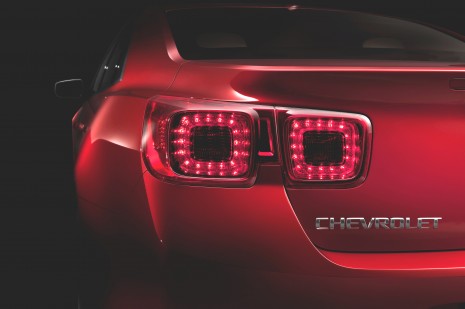 This is the first look at the 2013 Chevy Malibu, due for a full unveiling at the 2011 New York and Shanghai Auto Shows on April 19th. So far, we get nothing but a teaser of the rear of the car and some general suggestions as to its specs, though the video below gives a better idea of what to expect.

Those specs are very general indeed, however: expect GM's global four-cylinders, plus six-speed transmissions. The one thing notable in the announcement is the lack of any mention of a V-6 option. The current Malibu is available with a 252-horsepower 3.6-liter V-6 in 2LT and LTZ trims.

Also not mentioned in the preview release: hybrids, though with GM's use of eAssist technology on similarly-sized Buicks, it's likely the next-gen Malibu will offer some sort of electric-assisted variant.

Given the 2013 model-year designation, we don't expect to see the new Malibu on sale until sometime next year, with the current model filling in the gap until then. Expect full details later this month.

Chevy will hold a live web reveal April 18th from Shanghai, starting at 8:30 p.m. EDT at its Facebook page and with live streaming links for iPads and iPhones as well.