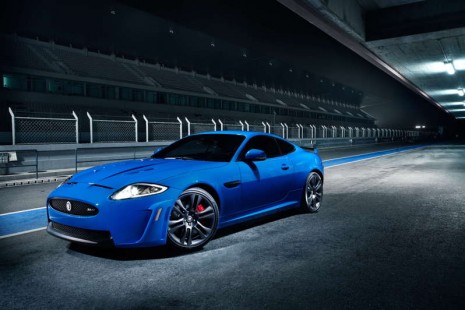 "Legendary" is a word that's thrown about with abandon these days, but it's an apt description of the Jaguar E-Type. For decades it has been the embodiment of Jaguar itself: Bold, sleek, sexy, fast, powerful. Its influence is still felt today, in the fastback shape of dozens of different sportscars, from the Corvette to the Z. It even remains on permanent display at the Museum of Modern Art in New York City.

This marks the 50th anniversary of the E-Type's debut, and not surprisingly, Jaguar is making 2011 a Very Big Deal. To celebrate, the company is taking numerous steps, for example, it's the featured marque at then 2011 Monterey Motorsports Reunion (formerly the Monterey Historics). However, if you prefer to drive your homage, rather than just attend one, then Jaguar's got you covered with the XKR-S.

This high-performance model of an already high-performance car packs more than just outrageous exterior design. Under the hood is a 550-hp version of the XKR's  supercharged V-8 engine. Jaguar claims that 0-60 times will take only 4.2 seconds, and the XKR-S will have a top speed of 186 mph, making it the fastest XK the factory has ever made. What else, and how much? Jaguar isn't say, but more info will be available on March 1 from the Geneva show itself.

It's fitting that the debut of the high-performance XKR-S takes place at Geneva, since that's where the E-Type made its debut 50 years ago. This, too, hasn't been lost on Jaguar, and the company will be celebrating with an E-Type ceremony at the Restaurant Hotel du Parc des Eaux-Vives in Geneva, the site where the E-Type was unveiled to the public by Jaguar founder Sir William Lyons himself.