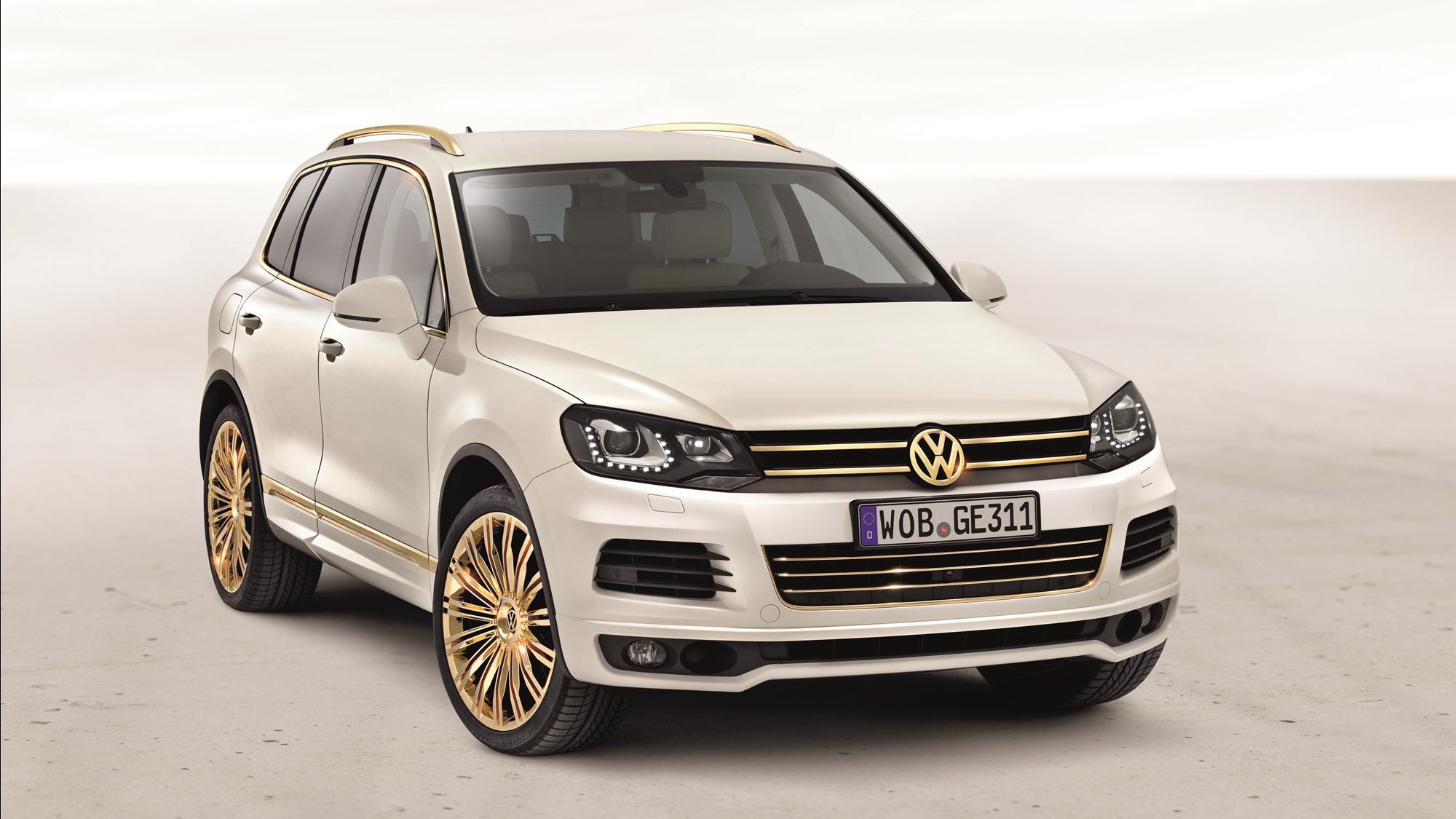 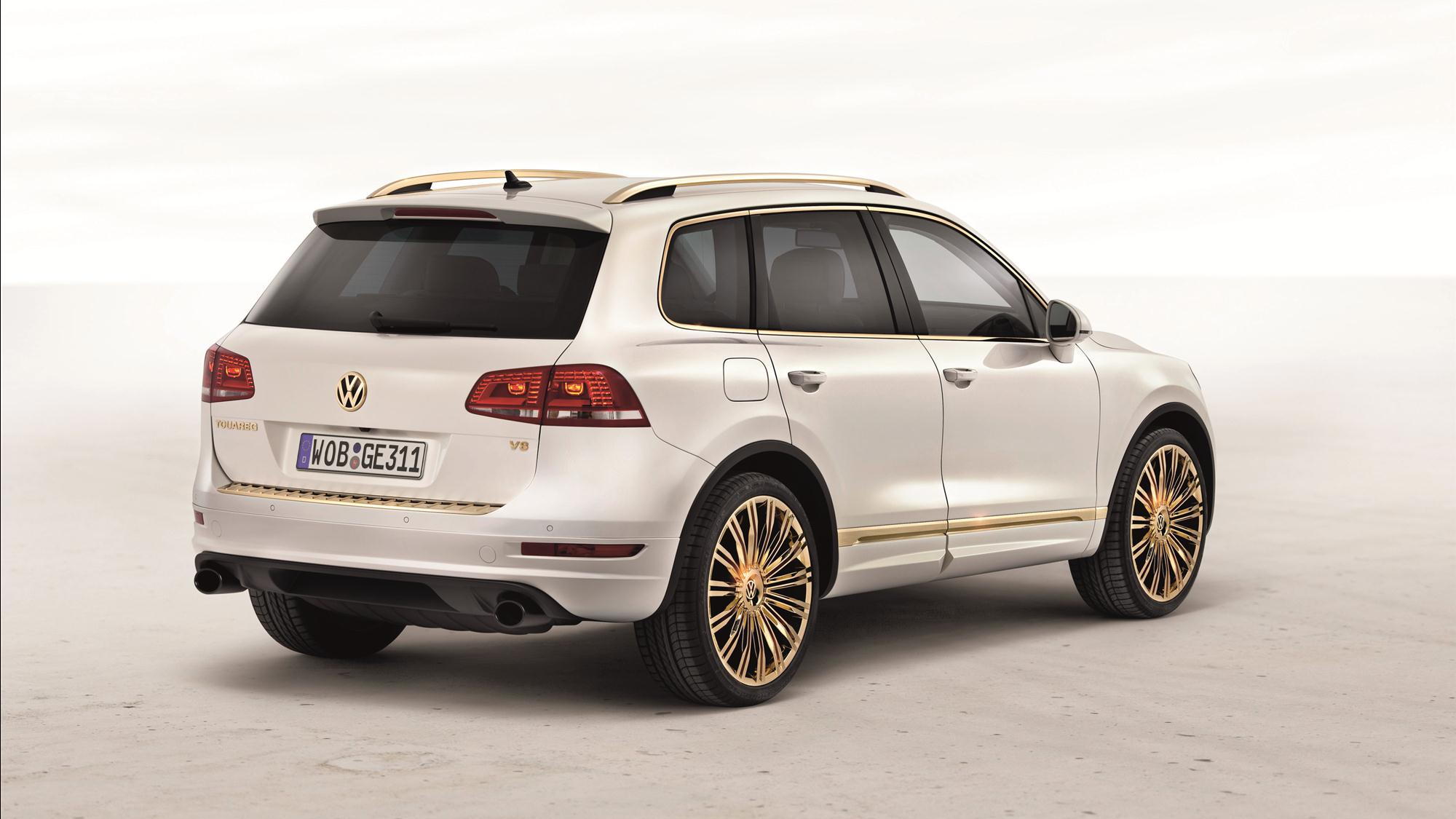 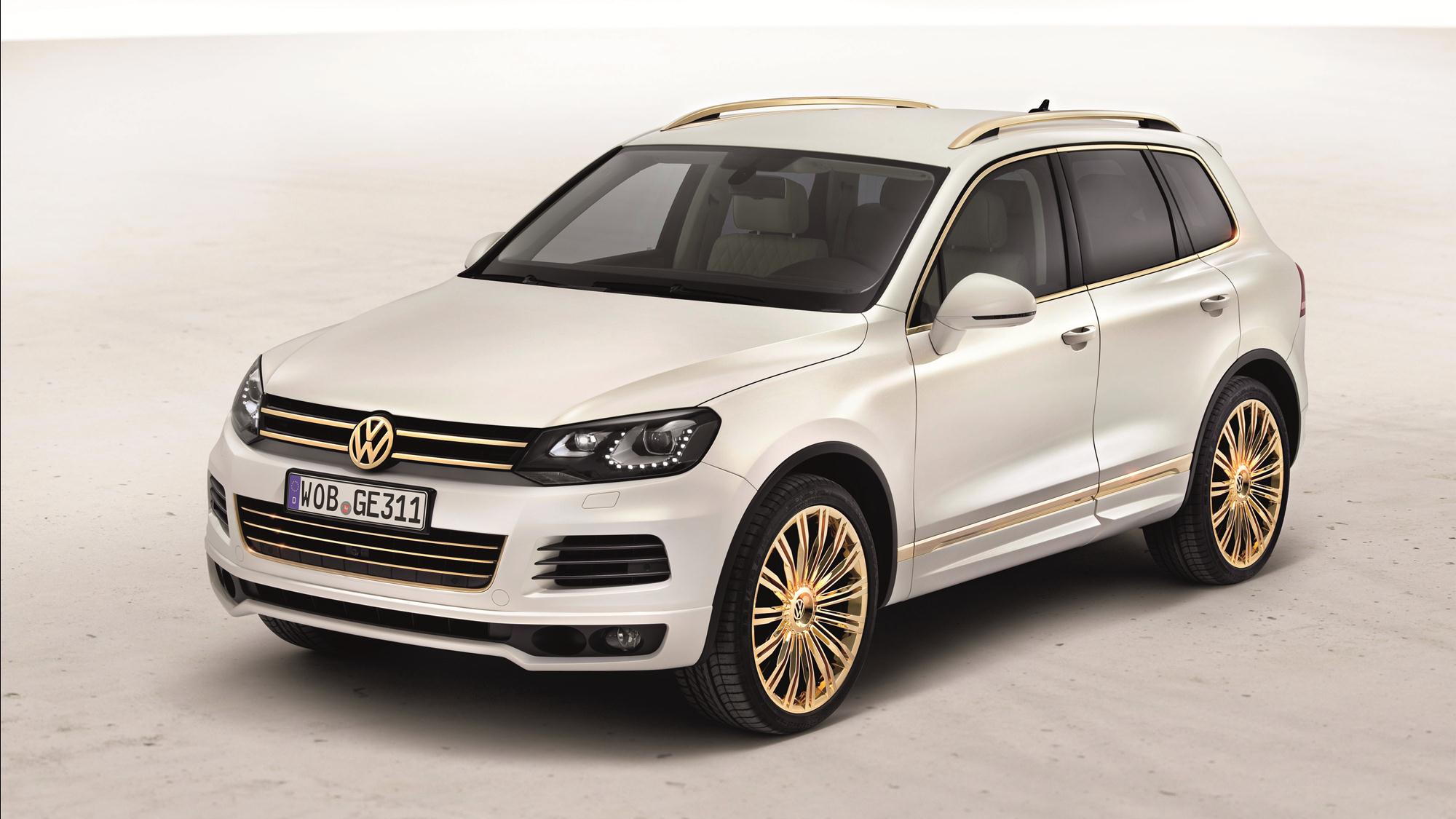 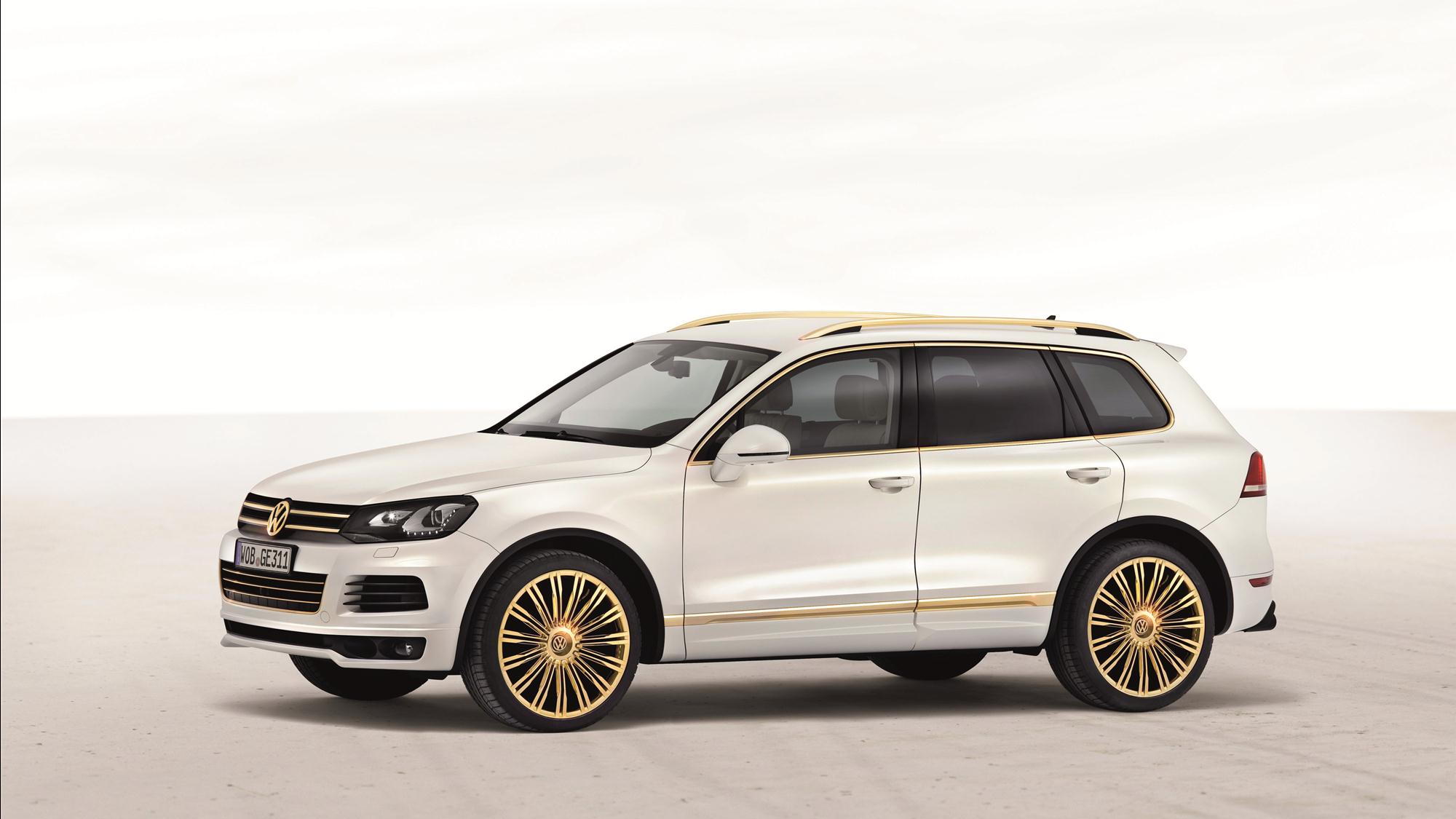 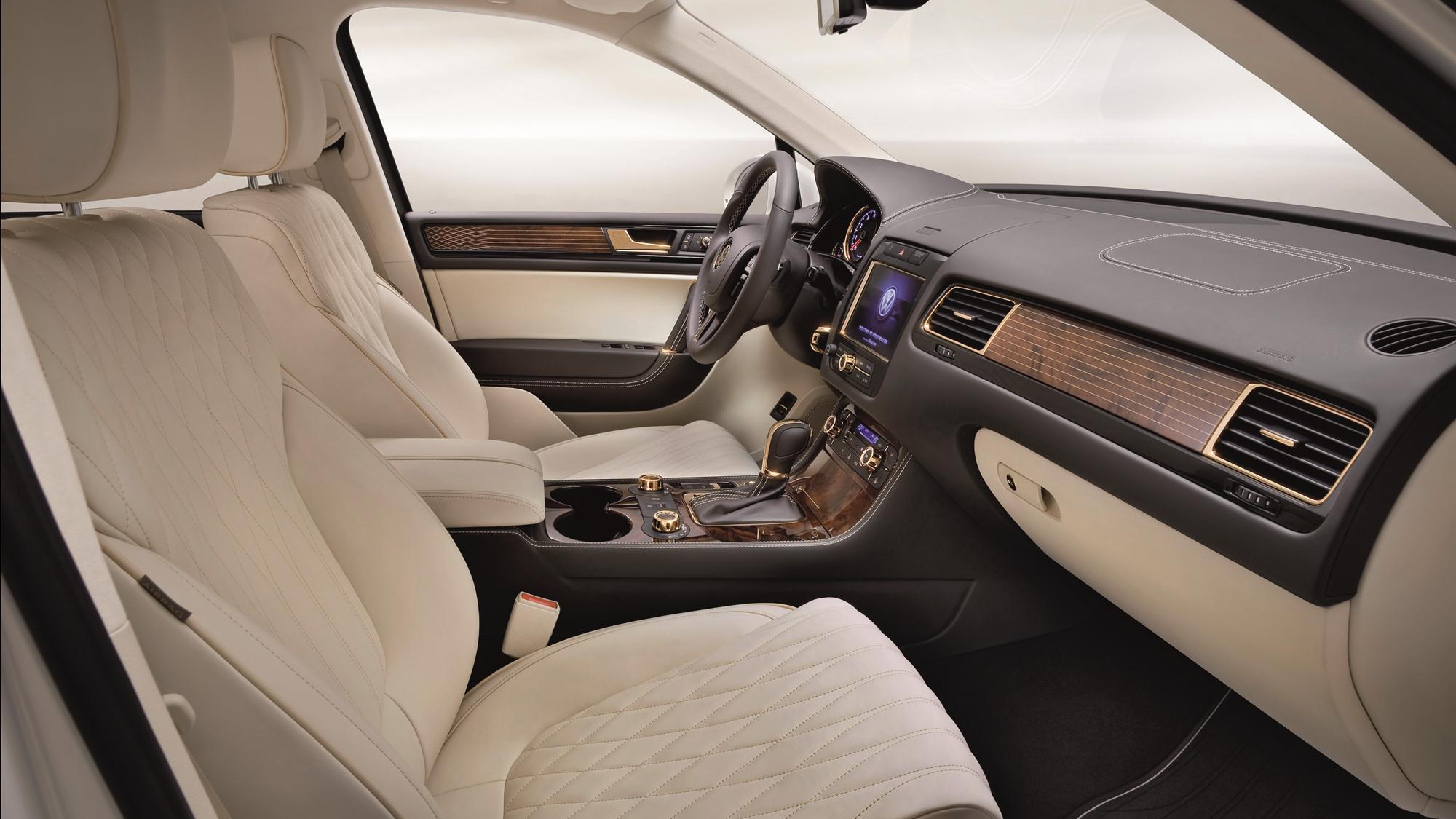 Two new Touaregs made their debut in Qatar today, with a special take on the Race Touareg 3 and, for the driver that can't get enough of anything, the Touareg Gold Edition. Yes, that's real 24-karat gold.

Bling is not a worn-out term in Qatar, it appears--or at least not a worn-out concept. Starting with a regular Touareg, VW added custom 22-inch wheels, roof rails, rub strips, and other details--all plated in gold. Inside, there's more.

Switches and other details get the precious metal treatment, while the dashboard is trimmed in brown leather with contrasting seams. Walnut Burr wood trim finishes the look.

The Race Touareg 3 Qatar likewise adds some gold to its look, though only in color, with new 18-inch BBS wheels replacing the standard 16s. The best part of the special-edition race SUV is that it's street legal. VW also put together a more friendly interior with elements offering tirbute to the Dakar rally, including the winning years etched into the center console.

Touareg Gold Edition: 24-carat gold makes this SUV one-of-a-kind
Wolfsburg / Doha, 26 January 2011 - At the first Qatar Motor Show (26 - 29 January), Volkswagen is presenting two exclusive SUV concept cars for the first time. The common denominator of these all-wheel drive vehicles: No compromises! Show car number 1 is a slightly tamer version of the Touareg 3 that started in the Dakar Rally at the beginning of January; this 228 kW / 310 PS Volkswagen could very well be the world’s most talented street-legal SUV. Show car number 2 is the Touareg Gold Edition - many of its parts have been upgraded with 24-carat gold; this 265 kW Volkswagen (360 PS) is debuting as one of the highest quality SUVs ever. The cost of these concept cars? Priceless. Yet...

This is a genuine Rally motorsport vehicle, like the one that was still touring South America in the Dakar Rally two weeks ago and was built to withstand the toughest rally race in the world. The vehicle now being shown in Qatar is a version of the Race Touareg 3 – an SUV that can sprint to 100 km/h in less than six seconds – that is legally approved for use on public roadways. The just over two metre wide body was slightly modified for road use. Instead of 16-inch wheels, new 18-inch wheels from BBS with a gold look are being used. The "Race Touareg" signature – also in a golden colour - stretches the entire length of the vehicle’s sides. In turn, it is perfectly coordinated with the exterior paint in "Magic Morning," a white that has a slight gold shimmer to it.

The interior was completely redesigned; all that remained unmodified was the safety cage. Without compromises also means an interior that offers easy controls and is ergonomic. The interior has an extremely well-organised appearance with focus on the driving machine, and it is equipped with Recaro racing bucket seats. Designers created an interior in so-called "Stealth look" that is reminiscent of the aircraft of the same name. In tribute to the Dakar Rally, the Dakar victories are etched in the anodised aluminium of the centre console, right next to the "Race Touareg" signature.

Other trim elements are treated in Matt Carbon. Tuned to this is the roll cage in "Serpentino Grey Metallic." Interior designers have upholstered the seat side supports and the door trim panels with Nubuk leather in "Black" and "Pure Grey," while the centre seat panels are made from perforated Nappa leather in "Titan Black." Additional accents include the two-tone seams and silver piping on the seat covers and safety-related items painted in "Tornado Red." The only other ingredient that is needed is some time to explore the world on a "360 degree route" in this uncompromising car.

Touareg Gold Edition
The Touareg Gold Edition would certainly be able to handle a journey around the world – but bear in mind, this car should only be parked where there is good surveillance. That is because – living up its name - certain areas of this SUV are upgraded with 24-carat gold. On the outside, they include the custom designed 22-inch wheels, roof rails, protective guard strips and window frames, mirror caps and parts of the air intake frame, "Touareg V8" signature and boot sill trim. Like the Race Touareg 3 Qatar, this SUV is also painted in "Magic Morning" body colour.

Inside, 24-carat gold also adorns many of the car’s accents and switches, making the entire car unique. The interior design itself has a pleasant, bright appearance in the "Luna" trim colour. The Alcantara roofliner shows this colour as does the Nappa leather of the seats, which is decorated with ornamental stitch detailing.

On the other hand, the dashboard is trimmed in a natural brown leather; contrasting seams in "Magnolia" colour perfect the colour scheme. Natural brown with leather inserts in "Luna" adorn the floor mats. Automotive craftsmanship at its finest is reflected in the Walnut Burr accents with genuine gold marquetry – also crafted into an ornamental pattern. This is in keeping with the general image of the Touareg, which – in the "normal" production version – is one of the most sophisticated SUVs in the world.