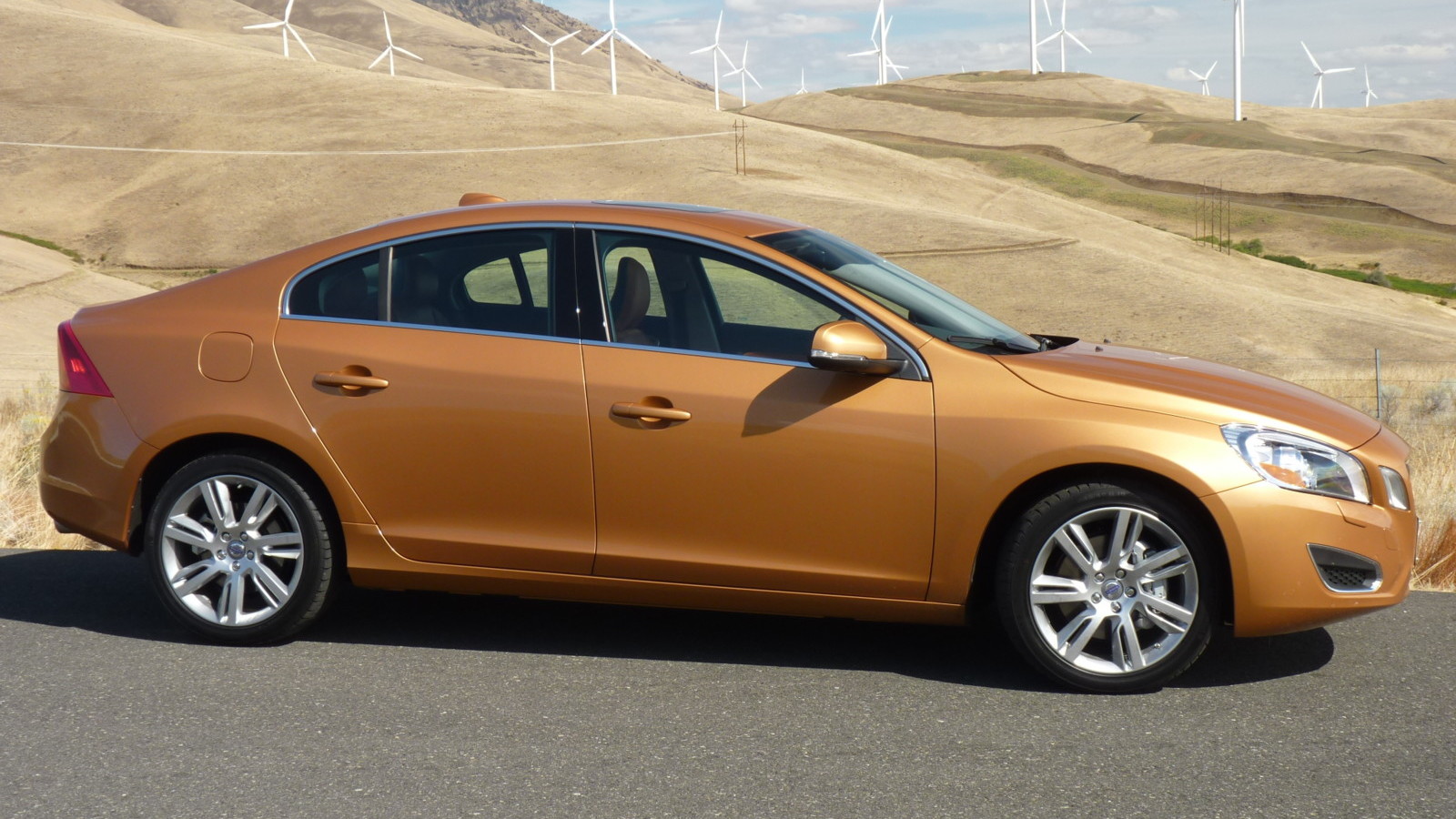 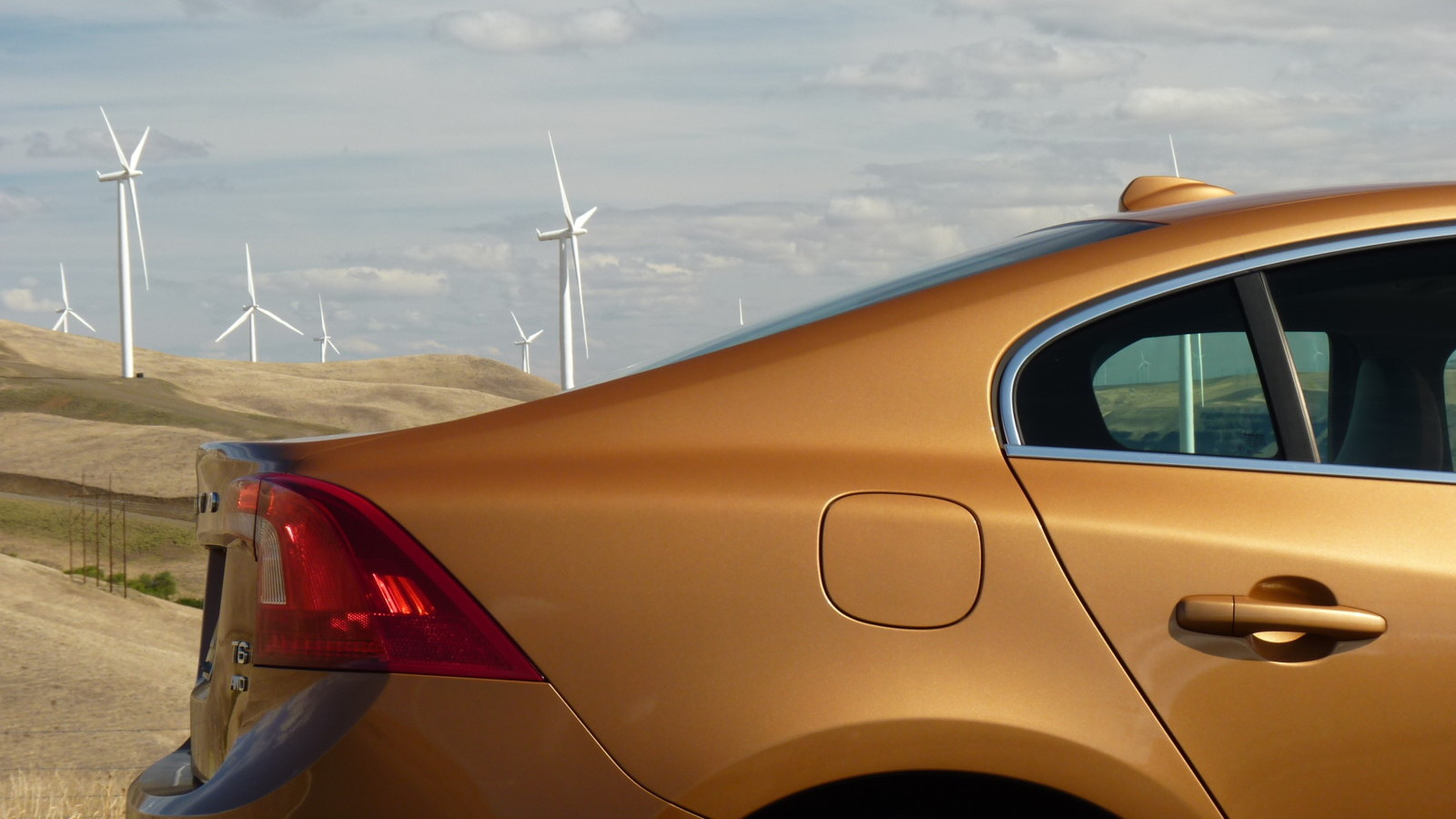 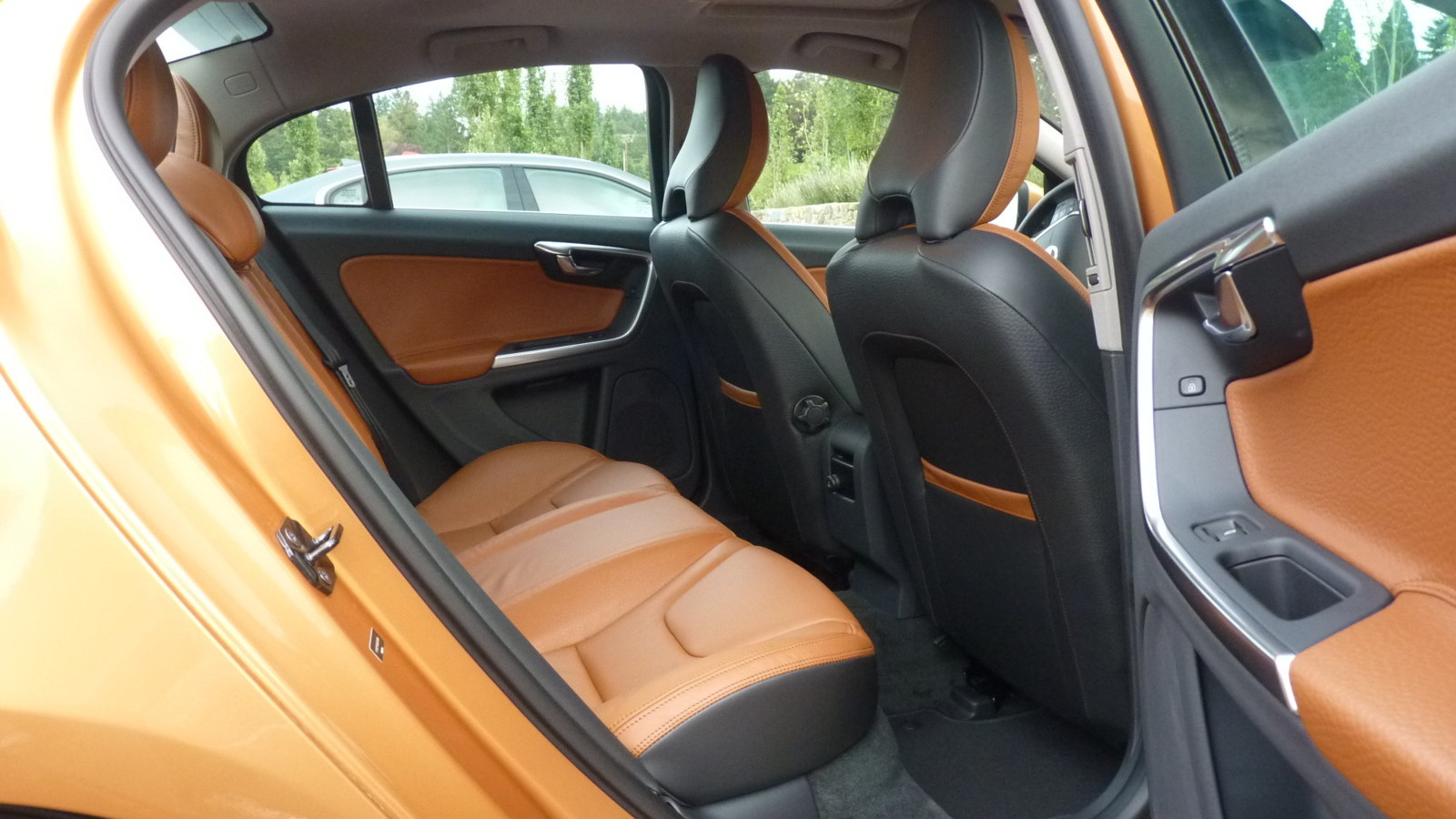 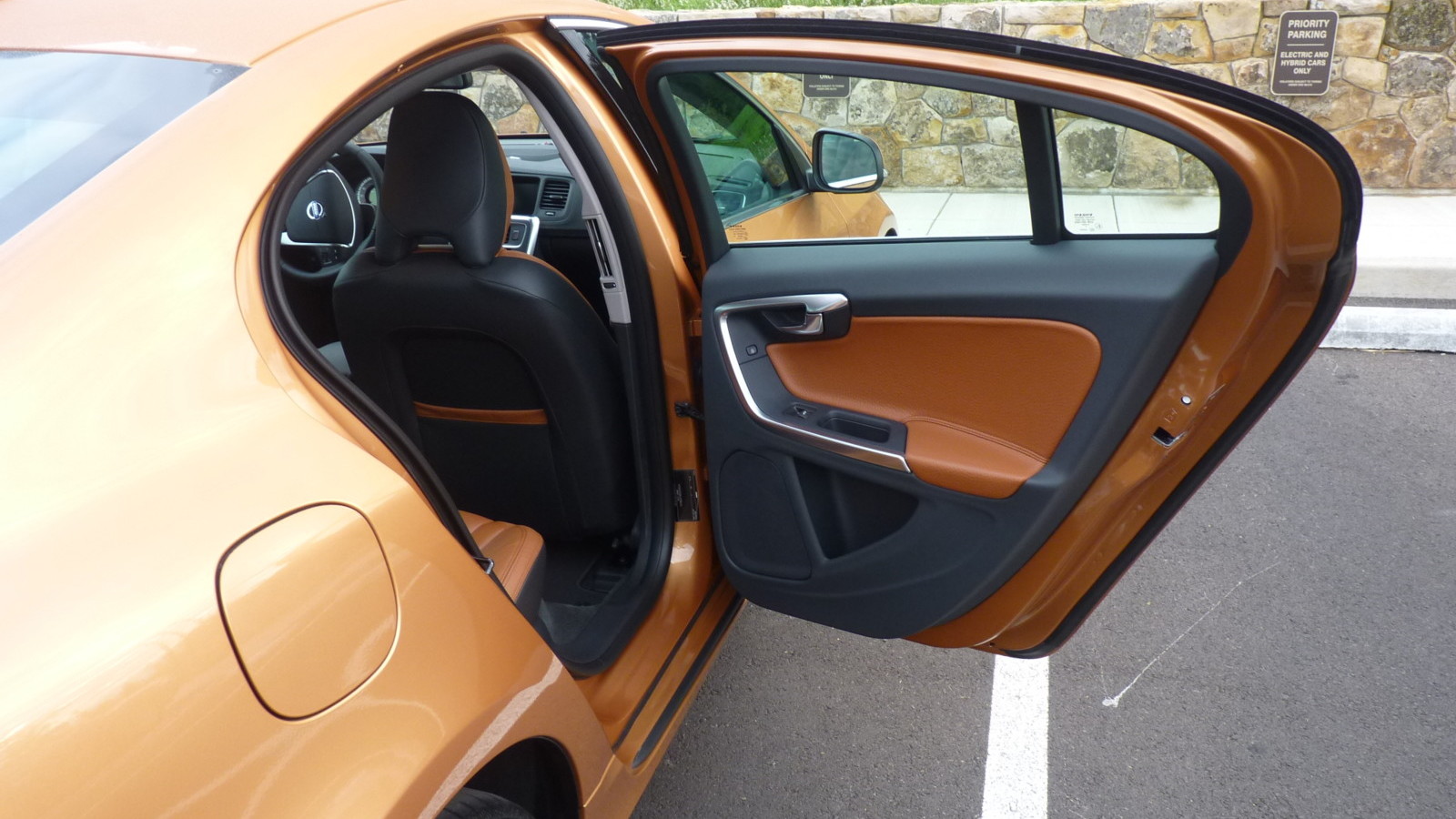 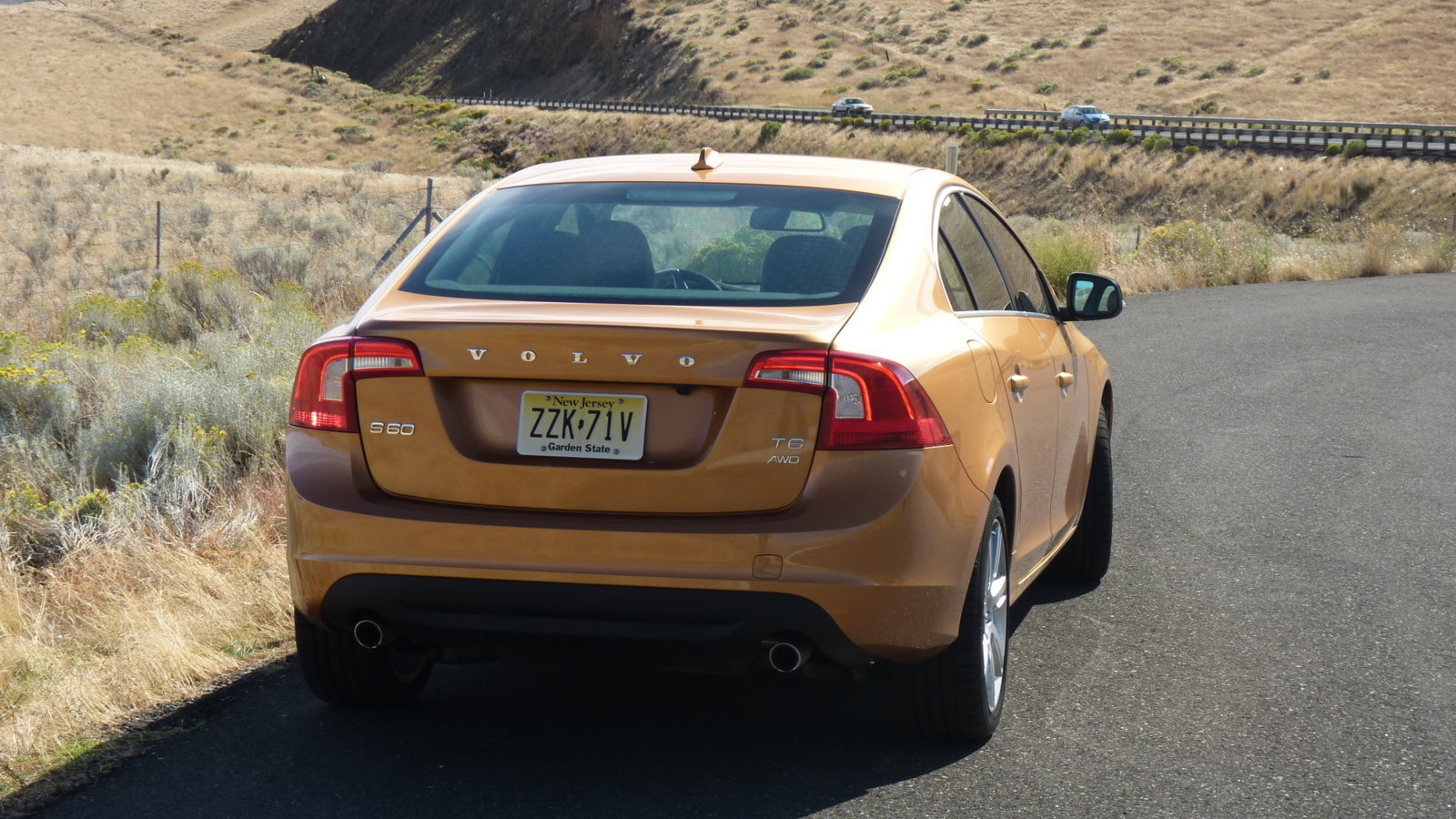 34
photos
I've just threaded through a tightly banked turn called the Half Pipe, on the way toward another area called the Pucker Factor. And I'm behind the wheel of a VOLVO.

Truth be told, there's a lot more to Volvo than there used to be: This time, Volvo is looking beyond just those who want style and safety and truly setting its sights on driving enthusiasts and models like the Audi A4--perhaps even the benchmark BMW 3-Series.

The 2011 Volvo S60, surprisingly, has the goods for hot laps in stock T6 form, which Volvo aimed to show, by bringing us to a new, very technically demanding track, called Oregon Raceway Park. But you probably wouldn't guess that when first approaching this new sport sedan, or even taking it for a trip out to the grocery store.

Doesn't wear its track cred on its sleeve, but it's there

The first impression of the S60, from behind the wheel, is that it's relatively benign yet more charismatic than Volvos of the past. Unlike sharp enthusiast sedans like the Mitsubishi Evolution, Subaru WRX STI, or even to a degree the Nissan G37 or BMW 3-Series, the S60 doesn't reveal its sporting intent at every moment. Ride quality is firm but very absorbent, the cabin is tight and quiet, and it feels all the part of a luxury car.

While other markets will get smaller engines, the S60 is being brought to the U.S. in only one powertrain flavor for now: a 3.0-liter turbocharged in-line six-cylinder engine, making 300 horsepower and 325 pound-feet of torque; those are some pretty impressive numbers, but drive the S60 normally in traffic and you probably wouldn't know it, thanks to a soft throttle calibration and all that refinement. It's hooked up to a six-speed automatic transmission on all models (there's no manual transmission available), and all U.S. S60s come with all-wheel drive.

Of course, the Volvo engine is begging a comparison to BMW's 300-hp, turbocharged straight six; compared to BMW's six in the 335i, the Volvo engine makes its peak torque a bit higher—2,100 rpm versus 1,400 rpm—and overall it doesn't churn out the torque just above idle like the BMW mill; meanwhile, the turbo V-6 in the Audi S4, making 333 hp, is closer in character to the Volvo engine. The S60 is just a little heavier than those sedans, which might add to the impression. Nevertheless, 60 mph comes in a very respectable 5.8 seconds. The engine in the S60 is smooth and sweet in ordinary driving, leave your foot in it and the somewhat muted launch off-the-line is replaced by OMG delight at the top of first and second gear; overall the S60 feels perky and pretty responsive and could easily handle the mountain grades on our drive as well as the abrupt 400-foot elevation changes of the track.

In all, the whole package feels perky, responsive, and of course uber-stylish, and far warmer and inviting inside than you'd probably ever expect if you've taken a look at Volvo in the past.

Ever since Volvo presented its S60 Concept at the 2009 Detroit auto show, we knew something radical was on the way for the automaker with its next production S60 sedan. Sure enough, the 2011 Volvo S60 that was unveiled earlier this year (and goes on sale this fall) is handsome, expressive, and organic all at once from the outside, while looking instantly recognizable as a Volvo. All the textures, contrasts, and curves of the interior are as well both functional and a feast for the senses.

The S60 really isn't that large: Its 182-inch length puts it at about the same as a Chevy Cruze, or in luxury speak, any number of compact sport sedans like the Mercedes-Benz C-Class and Acura TSX. But Volvo makes great use of its space. Take a seat in the 2011 Volvo S60, and its rakish design doesn't make any real compromises for functionality. The S60's lower cushions in front aren't quite as long as this six-foot-sixer would have liked, but it was easy to reach a good driving position and after several hours of driving on curvy roads our backs were feeling fine. As with any small sport sedan this size, backseat space is at a premium; in order to help fit adults back there while keeping that low, swoopy roof, engineers smartly dropped the lower seat cushions and provided outboard occupants with carved-out individual positions. The result, shockingly, is that occupants well over six feet tall (including this writer) can fit in back, with some built-in lateral support as well.

The S60 steers and handles exceptionally well, with surprisingly good steering feel considering there's such good isolation from harsh surfaces. The S60 is still based on the same platform and underpinnings as the new S80, as well as the XC60, V70, and XC70, but of all those models it has the stiffest, sportiest tuning suspension tuning yet. The steering-gear ratio is also quicker than in Volvo's other vehicles, and the column itself gets stiffer bushings to help bring more feel of the road. Through a “MyCar” menu accessed when stopped, the driver can dial up one of three settings for steering feel. Surprisingly, the lightest setting was our favorite, as it brought easy maneuverability in the parking lot yet seemed, counterintuitively, to impart more a bit more feel of the road at higher speeds.

S60 buyers have a choice of one of three different suspensions: Touring, Dynamic, and Four-C Active Chassis. Out test car came with the Dynamic setup, which will be standard on U.S. cars; the softer Touring suspension will be offered as a no-cost option, while the active suspension is a $750 standalone option. But on the track, we drove an S60 with the active system—that comes with Comfort, Sport, and Advanced modes, but we kept it in Sport for most of the time.

Yet despite its racy looks, dashing interior, and sport-sedan credentials, the S60 is certainly not a car that invites to be flogged. Not in the same way as a BMW 335i, or even an Audi S4. The sportiness is all there on the road, but you have to work a bit to bring it out; there's a slight delay from the time you press the accelerator pedal until the turbo six really comes to life, and in the on/off transitions of a twisty road, the Aisin six-speed automatic would get a little confused, hesitating for a moment, then downshifting a little late coming out of each turn. If you nudge the shift lever over to the right, the transmission will supposedly follow a sporty shift pattern and 'learn' the road; but we didn't have much better luck with that.

Crack the whip, and S60 shows its athletic side

Even out on the track, we had to plan our attack for each curve a little differently than we would in most sharp-edged all-wheel-drive sport sedans: Some of them reward finesse, but the S60 seemed to do better with the whip out. We'd find our line, then simultaneously dial up just a little bit of understeer while slamming our right foot to the floor; if we timed it right, the rush of power would come just in time to send extra power to the rear wheels, neutralizing the understeer and letting us run wide more gracefully. When it didn't work and we were either too timid on the throttle or too late to drop the hammer, we'd scrub it all off to hefty understeer.

Further bruising the S60's sporting intent a bit: there are none of the requisite paddle-shifters to be had, and the transmission won't actually lock into a gear. Squeeze into the throttle too much coming out of a corner in manual mode and you might get an abrupt downshift.

It's worth pointing out that fuel economy is quite good: It's rated at 18 mpg city, 26 highway, according to the EPA. Over about 220 miles of driving, mostly on curvy, mountainous two-lane backroads, we averaged 24 mpg according to the trip computer.

Safety is of course one of the top priorities for Volvo shoppers, as it has for decades, and again the automaker is at the leading edge. An all-new world debut in the new S60 is a Pedestrian Detection with Full Auto Brake feature, which can detect a pedestrian, vehicle, or other obstacle in the road ahead and brake to a full stop if the driver doesn't register any indication that they've seen it.

Lots of safety, most of it transparent

Driver Alert Control, Adaptive Cruise Control, and Lane Departure Warning are all available as part of a Technology Package, while a Premium Package combines a moonroof, power passenger seat, and active HID headlamps. A Multimedia Package (nav, real-time traffic, rear park assist, and premium sound) and a Climate Package (heated seats, headlight washers with heated nozzles, rain-sensing wipers, and headlight washers) are also on offer. Other standalone options include the Blind Spot Information System (BLIS) and Volvo's Personal Car Communicator keyless ignition and memory keyfob system. Up to about 20 mph, the system will detect an obstacle in the road ahead and, if nothing is being done by the driver, will brake automatically to a full stop. With any abrupt steering action, the system assumes that the driver sees the obstacle and is trying to avoid it.

However, overall, most of the S60's safety equipment is thankfully unobtrusive. There's none of the nanny feeling that we've experienced in the past with other vehicles, and we were allowed to enjoy driving pretty much as we please. Don't try tailgating though; windshield lights will brighten with a stern warning.

The S60's interior, in addition to being sleek and curvy, has a very well designed instrument panel. The 'floating' center stack includes a bin just behind, and there are plenty of small bins for things. Allowing real buttons for features—along with that rotary switch on the steering wheel—was a great decision for Volvo. You can simply press one of the buttons on the center stack, like 'radio' or 'nav,' then roll through the menus with the steering-wheel controls.

The new sound system—from Audyssey Laboratories, a company that's made its name with home and professional theater systems—sounds great, and uses 12 speakers with a digital amp. A USB port is included, inside the center console so you can hide the goods away, and when we hooked up an iPhone it allowed seamless control of the music and podcasts through the steering-wheel rotary toggle.

So is the S60 enough sport sedan for you? If you're a track hound, probably not; for straight track time and all-wheel drive, we'd rather be in an Infiniti G37x, BMW 335i xDrive, or Audi S4. But it's nice to know that the stout go-fast capabilities are there. If you want a comfortable and well-rounded luxury sedan, with some innovative safety and tech features, and a performance edge—and a style above the others—the S60 is a great choice.