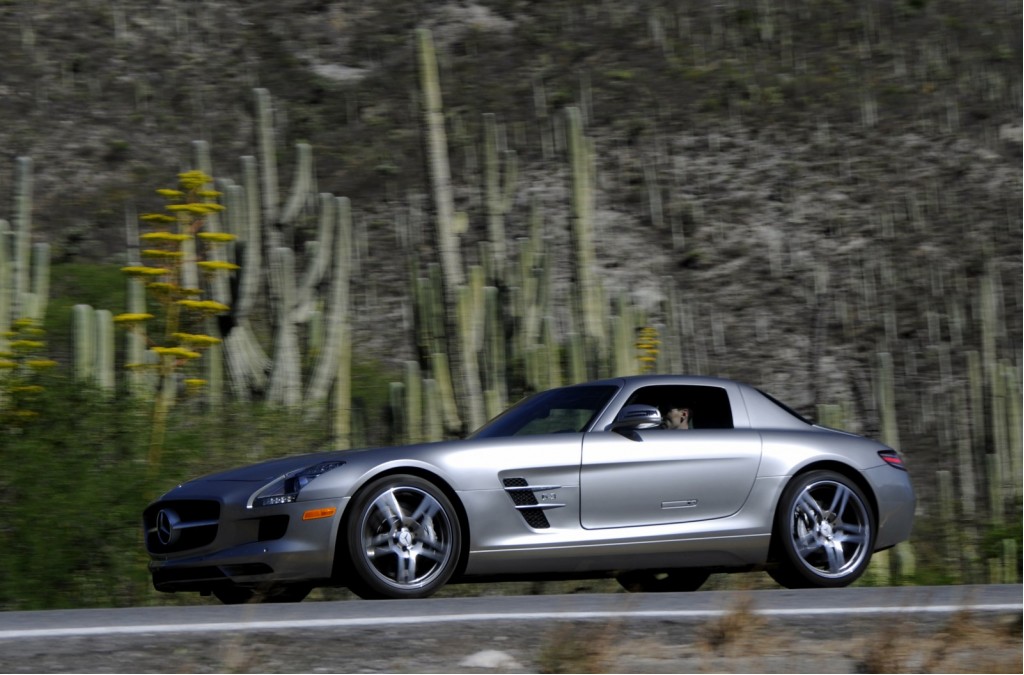 It is rumored that a less expensive, AMG SLS-based coupe has been in the works, and Automobile is now reporting that it may take on a slightly different form. Original speculation pointed towards a front-engine coupe with a layout similar to the SLS, along with some hand-me-down components. The two vehicles may not have as much in common as anticipated, and sources say there are a couple of reasons for this strategy.

First, an even more wild version of the SLS was considered. Performance limits would be pushed even higher, as would the price tag. This option would lack green appeal, and the company decided it might not sit well, even with some of the biggest spenders among its loyal customers. In the end, Mercedes-Benz wants to build cars that make money, and that plan left members of the corporate office skeptical.

A second downside to a mini-SLS would be product overlapping, something that could cut into sales of the current SLS. The company is making too much money on the car to risk another model drawing attention away from it. If done correctly, product diversification can boost sales. Mercedes-Benz certainly knows a few things about that. On the flipside, if done incorrectly, it will result in a bloated lineup, leaving customers questioning the real value of redundant models.

In order to avoid both scenarios, AMG explored two possibilities. The first was 4 cylinder, twin-turbocharged powerplant that failed to make sense financially. A big step in the opposite direction was suggested in the form of a small displacement V8. This, however, didn't make enough business sense.

A twin-turbo V6 now seems to have the best shot at making the cut. To aid the mid-mounted V6, a pair of electric motors will be mounted up front. Most of the electric components are expected to be carried over from the recent SLS electric-drive concept. Although the car's overall configuration will change drastically, several major drivetrain, suspension, and body structures are expected to be shared between the two vehicles as well. This combination has the potential to appeal to die-hard AMG enthusiasts without being totally ignorant to green advocates and emissions regulations.

An AMG representative has stated that the SLM will not bare close resemblance to the SLS in terms of exterior styling. It will probably appear first in the form of a coupe, but don't expect gullwing doors. Follow the link below for a look at a possible design. It fits in better with the Lamborghini lineup than it does the AMG lineup, if you ask me.

As cool as the SLS looks, I really like the proportions and styling of the SLM. Too bad I still won't be able to park one in my driveway. Wondering about availability and pricing? You'll have to wait another 5 years or so to buy one. Hopefully that's long enough for you to save up for the estimated $165,000 asking price.