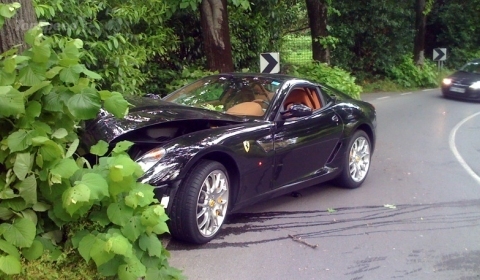 Another rare supercar has bit the dust; this time ‘round it was a black Ferrari 599 GTB Fiorano that ran into a tree in the European country of Slovenia.

Unlike typical Ferrari crashes where the cars’ mid-mounted engine positioning can often save their powerplants, the 599’s front engine layout means that its mighty V-12 will almost certainly have sustained some serious damage in this crash.

Fortunately, the crash doesn’t look severe enough to warrant this car a total right-off--we just don’t want to be the ones to foot the repair bill.

Perhaps in future, every Ferrari purchase should come with a mandatory driving course so that more of the previous metal--and carbon-fiber--can be saved from occurrences like this.