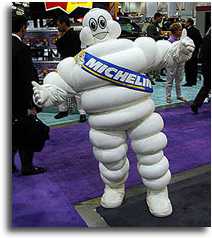 Bridgestone's exclusive tire contract for Formula 1 is up next year, and already several major manufacturers are bidding for it, including Michelin, Cooper-Avon, and Pirelli. According to reports out today, the current front-runner is Michelin, which may have the deal all but signed.

Michelin's interest in a return to F1 is curious, considering the reasoning given in 2005 for their exit from the series the next year. Seeing the clear progression toward a single supplier, Michelin mourned the loss of one aspect of the technological race in F1, and as Edouard Michelin stated, "This decision [to withdraw from F1] is the result of profound differences between Michelin’s long-standing sporting philosophy and the way Formula One is managed by the regulating authorities, which no longer provide a clear and sustainable environment to justify long-term investments.” What has changed in the ensuing four years isn't clear, but Michelin is definitely looking to return to the sport.

If Michelin wins the contract, it'll likely be an exclusive three-year deal that lasts through 2013, much like Bridgestone's current setup. The Michelin badge would be splashed across the series, from driver suits to cars to circuits.

There's also a possibility that the wheel diameter would be changed from the current 13 inches to 18 inches so that lower-profile tires could be used. That would obviously necessitate changes to the cars as well, but it's not expected to go into action until after 2011.

There's no timeframe for the FIA's decision yet, and Pirelli is still pushing hard to get its bid accepted, planning a presentation to the teams during this weekend's Spanish Grand Prix.

Whichever brand wins the tire bid, the next few seasons are shaping up to be very exciting, with the return of KERS for 2011 and a possible 1.5-liter turbocharged four-cylinder--that might even be supplied by VW--on the docket as early as 2013.